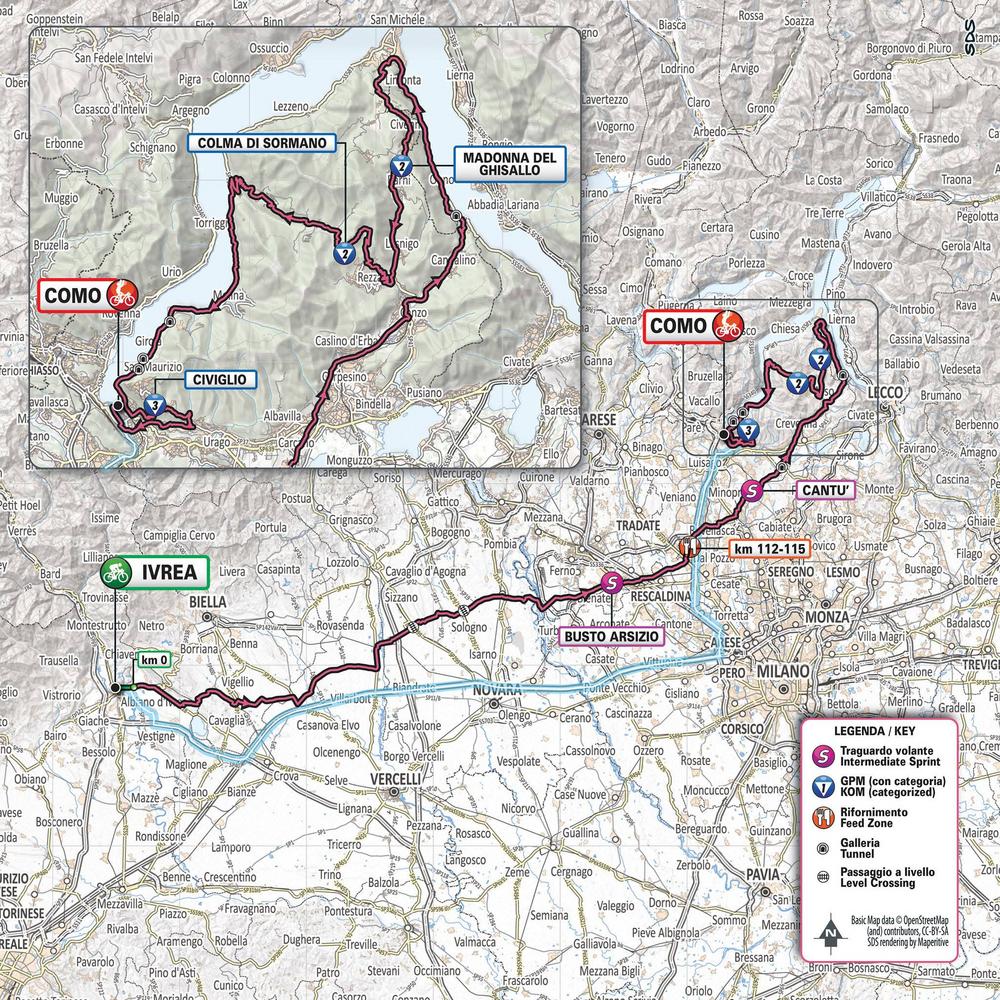 Technical Overview:
After two important mountain stages, stage 15 is another very demanding stage... almost a monument. The route features the main elements of the recent Lombardia editions finishing in Como, with only a few limitations. The first part of this stage is very easy: it starts with a small uncategorized climb to Zimone (4.6 km at 5.1%), which will help creating the break of the day, and then it eases off heading east, becoming a long flat stroll on the Po valley. The first categorized climb only begins at km 164, and it's a famous one: Madonna del Ghisallo (GPM2, 8.6 km at 5.6%), an absolute classic of the Lombardia and Italian cycling in general, hosting the shrine to the patroness of all cyclists. It's a steep climb, whose low average gradient is due to a 3 km long false flat near the top. A very short descent leads to the second GPM of the day, the Colma di Sormano (GPM2, 9.6 km at 6.6%), a very constant climb mostly famous for its Muro, which will not be climbed today, probably due to logistic concerns. Its descent is fast and very technical, and brings to the shores of Lake Como, where the riders will ride 16 km of rolling terrain that does not really favour chasers. After reaching Como itself, only one GPM remains, and it will probably be the decisive one. Civiglio (GPM3, 4.2 km at 9.6%), a recent addition to the Lombardia, is short and very steep, almost always between 9% and 10%. The descent is short but very tricky, and after it the riders will only have to reach the finishing line after the final flat 3.5 km.

The Climbs:
Madonna del Ghisallo, GPM2, 8.6 km at 5.6%
The sacred climb of (Italian) cyclists. It's also a pretty tough one, even if it's short.

Colma di Sormano, GPM2, 9.6 km at 6.6%
Mainly famous for its Muro, the narrow shortcut that connects km 5.1 to the top. Today they are not doing it, and what's left is a rather normal climb.

Civiglio, GPM3, 4.2 km at 9.6%
Short and steep, it has decided the last three Lombardia editions that finished in Como. And it will probably decide this stage, too.

What to expect:
I don't think GC contenders will try anything on Ghisallo or Sormano, but no matter what, Civiglio will decide the stage win and might produce solid gaps among the favourites. 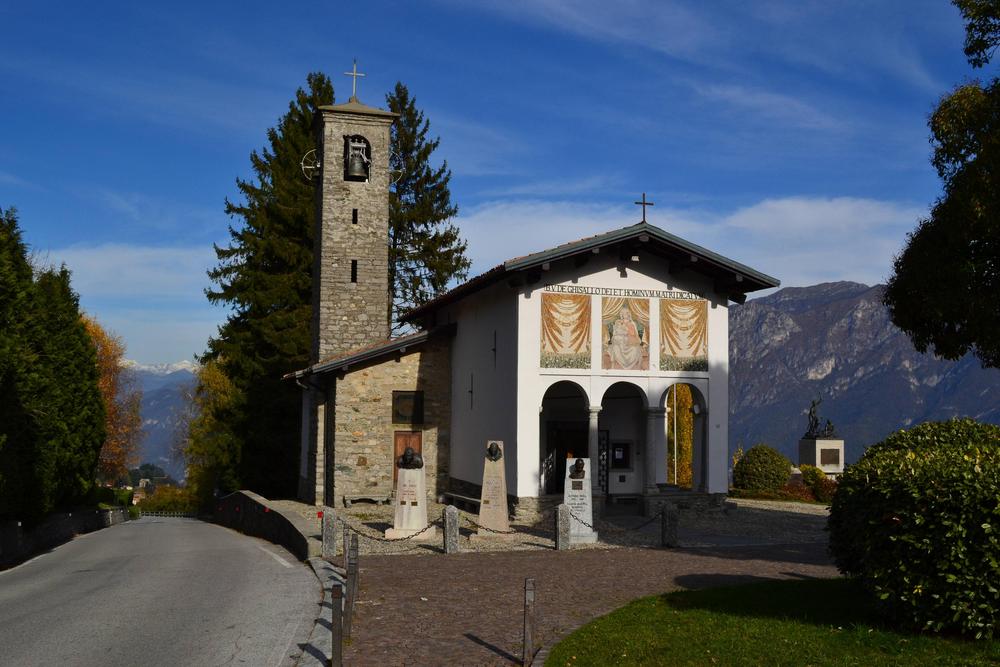 The Sanctuary of Madonna del Ghisallo, patroness of all cyclists.
Click to expand...

All out war on Civiglio.

Or splitting peloton in Sormano descent. Roglic and Nibali should be allies in this.

They might get to Como just in time for a shower.
Scattered showers, low twenties, cloudy, single digit wind of kph.

Eshar thinks nothing significant in the GC before Civiglio will happen, but I don't think they should miss any opportunities from now on.

By the way I never realised that the Muro was a shortcut, not an extension
D

Movistar is a traditional GC team, they will control the action until the last climb.
Good steady pace, similar to the way Sky usually operates.

The only question is who will attack, Landa or Carapaz?
I

There is a good reason for anyone who is strong to attack all out because Monday is a rest day. So this one could see a lot of action.
Let's hope for a good race!
S


Escarabajo said:
There is a good reason for anyone who is strong to attack all out because Monday is a rest day. So this one could see a lot of action.
Let's hope for a good race!
Click to expand...

This stage was designed for him, Il Squalo will win it or at the very least gain time on most of his neighbors in the GC.

This stage really shouldn't be underestimated. Some people have called it a lombardia light version but although there are even less climbs before ghisallo than in lombardia and they don't use the muro di sormano as well as sfdb, lombardia also doesn't have two brutal days of racing beforehand. Someone could do some real damage on the final climb and this stage might be more important than some people think now. Nobody will gain as much as carapaz today but don't be surprised if the field of favorites gets completely shattered
D

Early break can make it!

Landa to attack with 100mt in Ghisallo. Nibali to counter and connect with Pozzo on Sormano ftw among the top 10
stage win to maybe Nieve or Formolo

This. I think that Moviestar will be defensive on this stage, given the profile isn't high mountains, and the energy already spent by Carapaz and Landa on previous stages. They need to not lose much time here, then recharge the batteries to gain minutes on Mortirolo.
D

Look for early break to form within 10 km

Look out at the road along the lake between Sormano and Civiglio, it's lumpy, pretty narrow, there are a lot of twists and turns and a couple of galleries, no one will be able to control the race there and, especially if there is no break away or a break very close everyone will try to slip away either to gain time or win the stage.
M

I think Movistar will wait till the stage after the rest day. Nibali should try something, probably Yates as well. Looks like a good stage for the break.
B

Carapaz will pause for 10 seconds in the last km to punish Roglic with the pink jersey
Click to expand...

On reflection I have to believe that Roglic knew exactly what the gap to Carapaz was yesterday, and maybe wasn't feeling as bad as he looked at times. Jumbo is not a strong team at the moment, so having to ride in front for 200 km or so today -- even if a break gets 10 minutes -- is something he wanted to avoid. I agree that the action will be on the Civiglio among Carapaz, Roglic and Nibali, though other Top 10 GCers could try something on the run in...

Both. They will take turns until one isn't followed. That said, the Carapaz attack was vicious. If guys are tired and he goes like that again I don't see anyone able to follow for long.
T

Should be a breakaway stage but a small chance that bBahrain chase for Nibali to go for the win in terrain he knows and loves.

Eros Capecchi for me. I just re-watched the climbs on stage 12 and he was scarily strong, both on the main climb and the short wall near the end. I'm sure he'll be trying to get into the break (although so will about 100 others I suppose).

Will Bahrein be the only team willing to control the stage. Because if that's the case I can see the break taking it. De Gendt?

Hopefully Ciccone gets in the break again for the KOM points and the break is allowed enough leeway by a tactical peloton so he gets a chance at a deserved stage victory.

Shortcut and shortcut..... But yeah, you can go higher up on the normal road or go left on a trinity little goat track to the tunes of 2 km at 15%. Yes, I have done that with gears that demanded me to dance on the pedals live Contador did in his later higher (few RPM). Simply just a brutal climb and understandable why it isn't in to some extent this year.
You must log in or register to reply here.
Share:
Facebook Twitter Reddit Tumblr WhatsApp Email Link