And so, after the final rest day, the race continues. As always, all the stuff from Eshnar below. 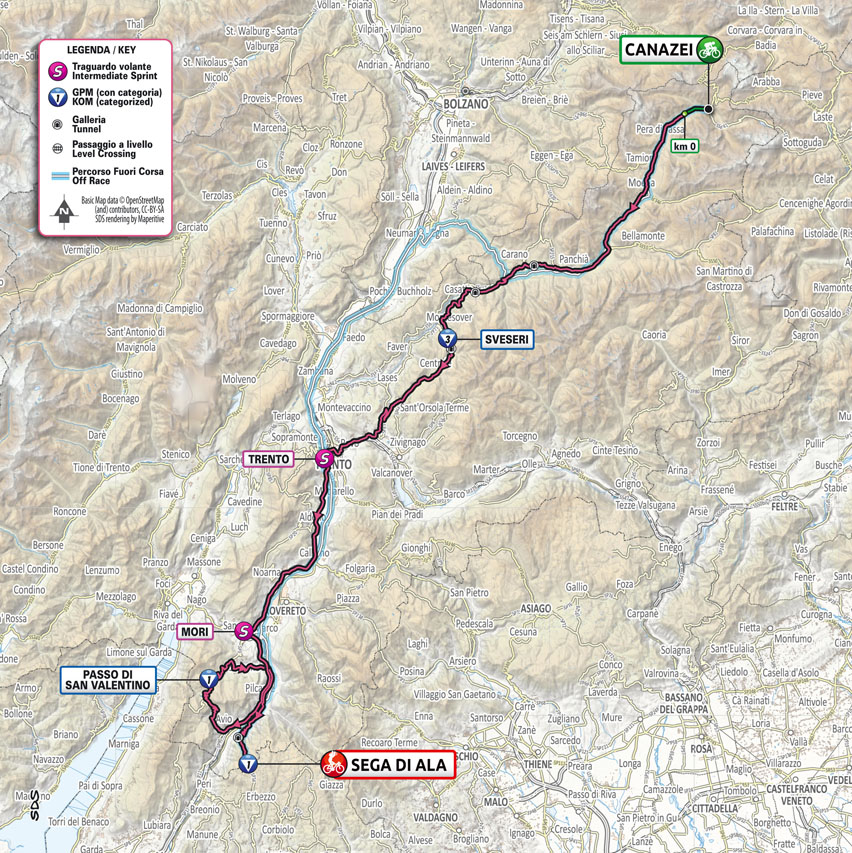 After the final rest day, a very demanding stage featuring the hardest 2-climb combo of this Giro. Starting from Canazei, where the peloton passed two days ago, the riders will go down along the whole Val di Fassa, almost 55 km of descending false flat. At the end of the valley they will hit the first climb of the day, Sveseri (GPM3, 2.9 km at 9.7%), a short and steep climb that might see some action if the breakaway isn’t established yet. From the top the road starts slightly descending again, eventually becoming a real descent of around 20 km that leads to the city of Trento, where the first intermediate sprint is located. From here on the stage follows the Adige river, with almost 50 km of flat terrain, including the second intermediate sprint in Mori. After reaching the town of Avio, the final combo will begin by climbing Passo San Valentino (GPM1, 14.8 km at 7.8%). This is a hard and long climb, with consistent ramps, especially in the middle section. The top is at 38 km to go, including almost 18 km of a very technical descent that ends at 20 km to go, on the same valley and same road the riders come from. Here they will simply keep riding again in the same direction towards Avio, but this time, after 8.6 km, they will instead turn left and tackle the last climb of the day, which is probably the hardest of this whole edition. Sega di Ala (GPM1, 11.2 km at 9.8%) has never been raced in the Giro, the only time it has been raced professionally being the 2013 Giro del Trentino. It is an irregular and grueling climb, that mixes false flats with double digit ramps often, particularly in its second half. And since its average gradient is 9.5%, those steep sections must be really steep indeed. The stage will finish at the village of Sega di Ala just like in 2013, although the climb goes even further up for 3 more km to the Passo Fittanze della Sega. It is a bit of a shame that they will not do the full climb… those last three km have gentle slopes and that would require riders to attack farther away from the finish. Maybe one day. 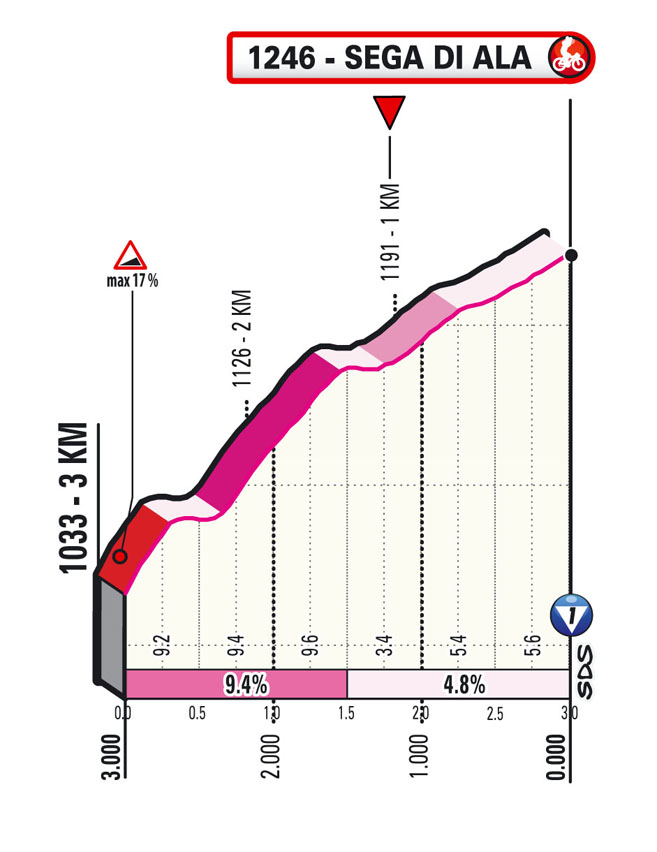 A pretty steep short climb on a wide road. No profile available.

Long and hard, with a very tough section of 8 km at almost 9%. It will do damage. 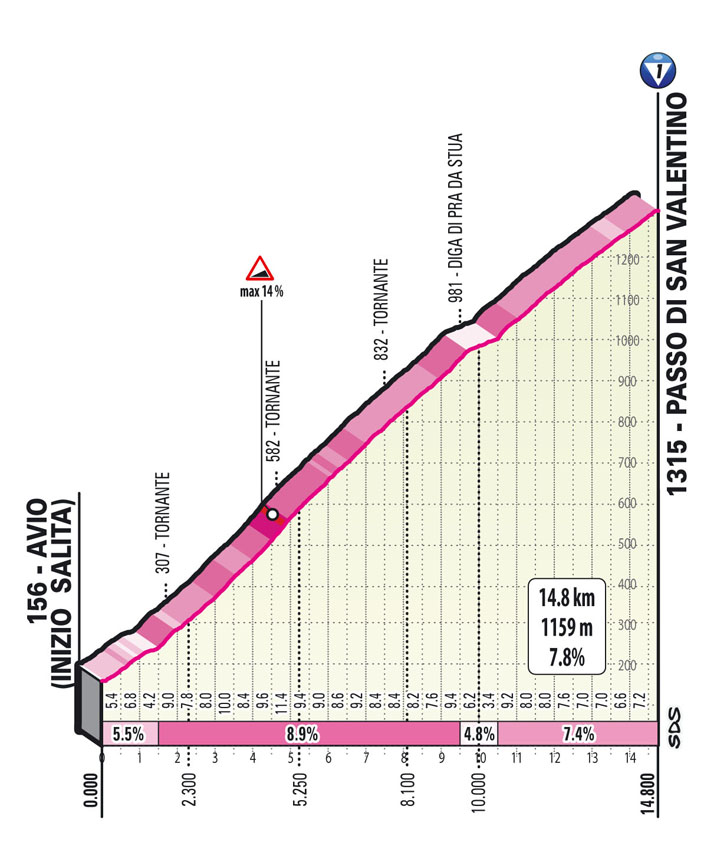 A new climb for the Giro, only raced once in the Giro del Trentino 2013, won by Nibali and featuring an impressive bike toss by Sir Wiggins. It is a terrific climb, that starts with a relatively regular gradient but then becomes very messy in the second half. The last two km are the easiest of the whole climb, so attacks better come before… 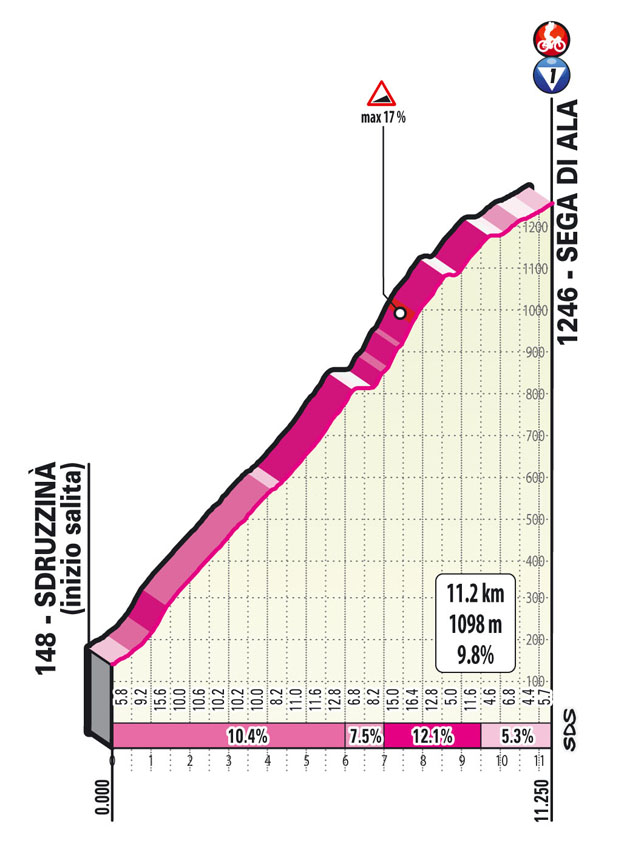 Mayhem at the start to get into the breakaway and mayhem on the final climb. I believe a solo attack on San Valentino is not possible, but a team action or an alliance would definitely work. The same goes for the descent. Whatever happens, it will be everyone by themselves on the last climb.

I'll be very acquainted with the finish line since this time there's nothing stopping me from going there.
Reactions: Sciatic, DoYouEvenRideBruh, Escarabajo and 6 others

This is the day we'll all remember. A few days ago the Giro organizers finally persuaded Remco to give a head start for his rivals before the 3rd week to have more drama. Tomorrow, however, there will be no mercy. Remco will go thermonuclear starting his epic solo ride in Canazei. It will be relentless (except a pizza break in Avio, just before climbs). After losing half an hour Egan will be full of excuses: i.e. too low altitude, too good weather, broken back for the whole race etc.
Reactions: thiscocks, Nick2413, JosefK and 2 others

Have you done the climb by the way? It looks like a real killer, and deffo harder than Zoncolan from Sutrio

Have you done the climb by the way? It looks like a real killer, and deffo harder than Zoncolan from Sutrio
Click to expand...

Yeah, with the steepest part ending with about 3km to go and the last 2 kms being the easiest of the whole climb it should give us better racing than the Zoncolan from Sutrio.
Reactions: Samu Cuenca, Fantastico, Lui98 and 1 other person

Mayomaniac said:
Yeah, with the steepest part ending with about 3km to go and the last 2 kms being the easiest of the whole climb it should give us better racing than the Zoncolan from Sutrio.
Click to expand...

There's so many hard climbs there at lower altitudes you can easily have a brutal queen stage there without the risk of snow, but I guess for the Giro I'd end up arguing about 90% of climbs feel underutilized and I don't wanna blame the snow for yesterday.
Reactions: DoYouEvenRideBruh and Sandisfan
K

Its the hardest climb of this Giro so the gaps should be pretty big. Bernal should be the strongest of the GC but the breakaway will probably take this one as usual.
Reactions: yaco and Red Rick
I

It's a shame this is a MTF instead of a descent finish. With the limited TV coverage we'd be far longer with no idea of what's going on.
Reactions: Gigs_98

I think there's some really interesting wrinkles here with some of the guys further back rounding into form. Easy to imagine some longer range attempts if the expectation is that Ineos won't chase you. Someone like Bardet over the top of San Valentino to a breakaway bridge perhaps or even possibly a big Yates or Ciccone gamble. Astana are always good for a gamble too so who knows with Vlasov.

Should be good racing

I don't think a break winning is that likely cause so much of the first 90km is downhill, so it's hard for a strong climbing break to go and it's also not the terrain where even with the blessing of the peloton the time gap increases super fast.

If they hit San Valentino I'd expect Astana or another GC to pace for GC attacks even if it's not an attack on Bernal.
I

I can see Astana trying a replay of the Monte Rest descent in San Valentino in an attempt to distance some podium contenders before the start of the final climb.
Reactions: Sandisfan

But I actually hope that Ineos will make it 3 wins for Bernal. Better GC action (at least between the riders below Bernal) if the break is caught.
Reactions: Sandisfan and hayneplane

This will be a great stage. Yates may move up in the GC.

looks like the weather will be good
Reactions: Sandisfan

The more I look at that final climb combo, the more I think there could be some proper action.
Everyone was at their limit yesterday, its the day after a RD both of those climbs are proper naughty. With the technical descent thrown in I expect 3 minutes at least covering the top 10 GC riders.
If he wants Bernal could break everyone's spirit again and again, like 2011 Contador did.
Reactions: Sandisfan and Publicus

I guess Fabbro and Großschartner will try to enter the breakaway once again, maybe someone like Bodnar or even Sagan will help them out on the flat.
W

Suspect it will take an age for the break to go tomorrow. Could be between the GC guys for the stage
Reactions: Sandisfan
H

Hope the GC stage win fight. The breakaways have had more than their usual share of glory already and 2 races in 1 means we often miss a frustrating amount of the action in the heads of state group seeing who is clinging on as back wheel and who is making tentative attacks in order to see non-descript riders rolling in 7th at 4 minutes down on the stage winner.
G

The stage is already ruined because the "km" is capitalised in the thread title.
Reactions: Sandisfan, PlanZ and Escarabajo

Another stage where Quickstep could have used Masnada, shame what happened. They now rely on Zubelmeida tempoing himself to 7th overall to get something out of the giro.

If i ever saw a climb that suited Simon Yates, this was it. If he doesn't make time tomorrow he has no podium chances.

Yesterday LFR mentoined the idea of adding Monte Bondone to this stage to get more climbing and length back into the race, but that will of course never happen. It owuldn't necessarily make the stage much better, cause then the break would most likely make it to the finish. Now there's at least a chance for a different outcome.

Let's hope a team drills San Valentino and someone descents like a madman.


tobydawq said:
The stage is already ruined because the "km" is capitalised in the thread title.
Click to expand...

Yeah, what's up with that?

Here's the profile with average gradients 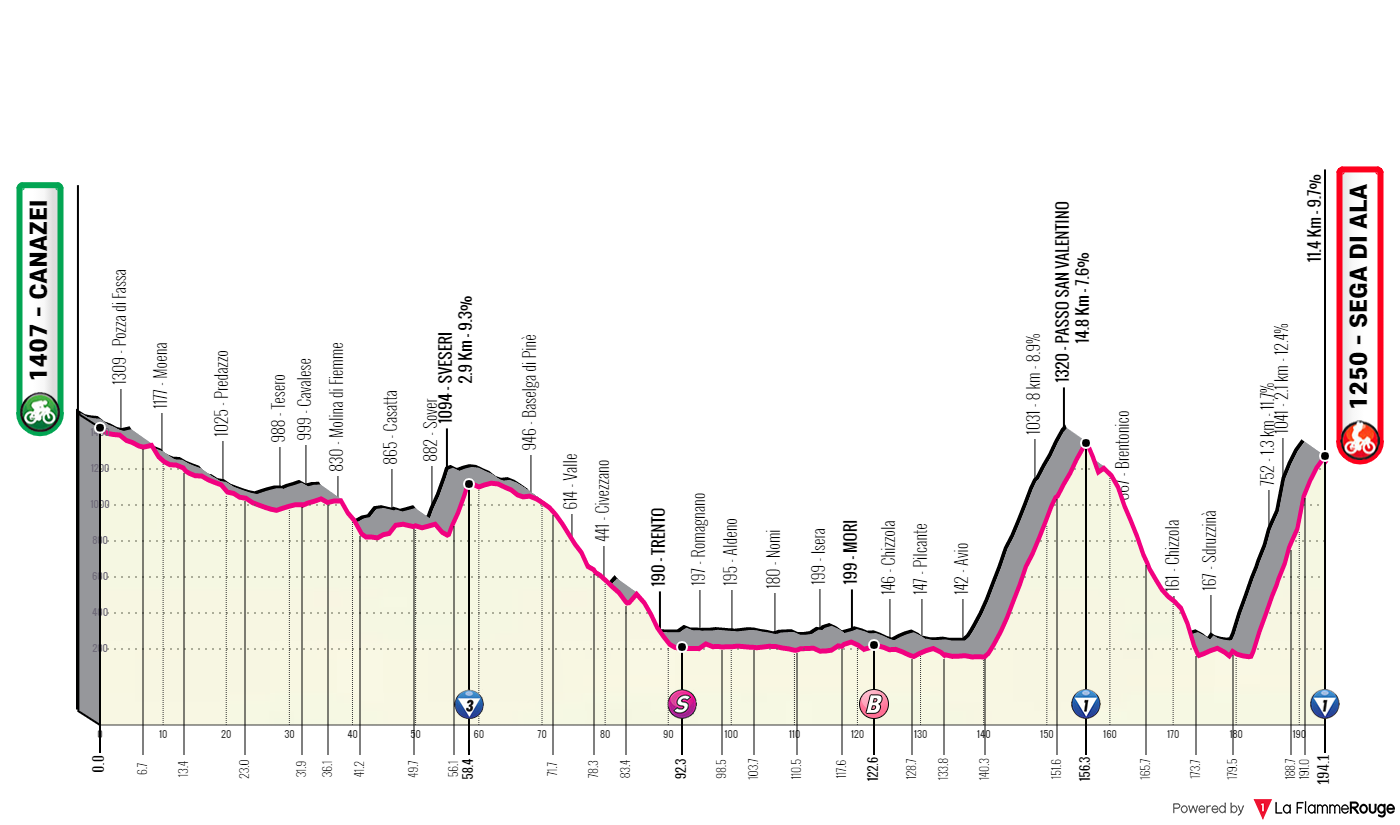