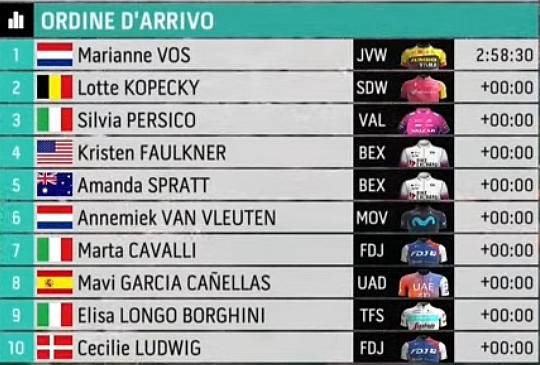 Samu Cuenca said:
She did what she had to do, and she also attacked 20 km from the line.
Click to expand...

TourOfSardinia said:
Vos sat on the wheel all the way up to Bergamo Alta
Click to expand...

Yes, cause she didn't have to do more than that, but holding Longo Borghini's wheel wasn't easy though. Her team also did a lot more work than Trek.
Y

The GOAT did it again - Thought, Garcia could have buried herself in the last 3kms to take time in GC.

Splits in the bunch late on, Chabbey and Muzic the most prominent to lose time, but since Évita is only the third highest placed rider on FDJ it's probably not a major issue for them, she'll probably be set to work looking after Cille and Cavalli on Passo Maniva if it doesn't get blown up from the bottom anyway.
Reactions: Ilmaestro99

am i supposed to be able to watch this on eurosport player?

Izzyeviel said:
am i supposed to be able to watch this on eurosport player?
Click to expand...

I assume so. Today's coverage starts in 10 minutes.

Big break with Labous, Harvey, Patiño, Williams, Fahlin, Cecchini and others has 8:30 with 33 km left.

BEX are leading the peloton.

I had completely missed that Vos had exited the race. Not real fight for maglia ciclamino then (unless AVV takes a lot of points over the next days). Majerus, Sierra, Zanardi and Vitillo are also out.

You'd think Labous is the obvious biggest threat here, but even so she wouldn't get on the podium if she climbs Maniva at the same speed as van Vleuten unless the others collapsed. Rossato and Ducuara are also within 15 minutes, while Harvey and Patiño are more proven commodities at this race and strong climbers in their own right. Viably could be a great battle for the stage at least, no guarantee the heads of state take it.

Ah. When it said 'live now' I presumed it meant 'live now with commentary'. alas...

BEX left the front when they had made sure Labous wasn't threatening Spratt's GC position. Amalie Lutro has attacked from the break to gain some screen time, but I doubt she'll make it far once they hit the actual climb (let's pray for TV pictures when they get there).

Labous is on her own now with 1:55 to the peloton lead by CUL and now also Cecchini. 6 km to go.

Yeah, it's delightful to see Realini up there. Fisher-Black has also recovered well since the start of the climb.
Reactions: Lui98

Nice win for Labous. Van Vleuten again only crushed them at the end after a series of accelerations.
Reactions: Ilmaestro99
Y

What is the reason for Vos' withdrawal ?

yaco said:
What is the reason for Vos' withdrawal ?
Click to expand...

I assume it's because she wants to have a bit more rest before the Tour (the pubslished quote said "recharging before the next goals"). Majerus talked about the heat as the reason, why she didn't want to finish when she's also going to the Tour.
Reactions: Ilmaestro99

It's quite pleasing actually when you look at things now that by and large these Unipuerto stages are no longer being as decisive, and the stages with the biggest time gaps tend to be those which are going up and down a lot more frequently. It augurs well for better mountain stages in future, as per that chart that Saul brought out a couple of years ago showing that multi-mountain stages were almost non-existent in women's cycling. Of course, it's possible that with the time gaps generated on stage 3, Annemiek didn't feel the need to completely blow it up from the bottom like she did on Laghi di Cancano a few years ago, since she only really needed to pay attention to García and Cavalli, but nevertheless, she did try attacking, as did Mavi, and the time gaps between the top 10-12 (excluding Juliette who was in the break) were not so big - around 90 seconds between van Vleuten and Magnaldi, as opposed to around 5 minutes on Monday.

Similarly, in the Ceratizit Challenge last year, a lot of riders were able to get to around 90" from Annemiek in the MTT, but in the ensuing stage with lots of up and down but not that much 'real' climbing, Annemiek won by three minutes and 10th place was over 7 minutes down, much more like the Cesena stage. Again at Norefjell in the Tour of Norway, 23 riders within 2 minutes, 10th place at +1'12, similar at Lagunas de Neila, (bigger gaps this year than in 2021, despite or perhaps because of the weaker field). The SD Worx annihilation at the Giro last year show that there are still cases where the single climb being attacked from the base can be absolutely destructive in women's cycling, but if we stand more chance of variety in the mountain stages and fewer hockeystick profiles in the near future, that's great news.
Reactions: Samu Cuenca and Lui98

Amanda Spratt has tested positive for Covid and is out of the race Georgia Baker is a close contact and is out as well.
Y

BEX has been unlucky in the Giro - Santesteban failed a COVID test three days before the race while Faulkner suffered from dehydration in stage 4 - This is another reason why you need seven riders in stage races of 6 or more days - So much more can be done to make the sport more professional.
Reactions: Samu Cuenca

García has attacked on the first climb and is now alone with Van Vleuten.
Cavalli, Fisher-Black and Labous have closed the gap to them now.

Faulkner has 3 minutes at the front. Koppenburg is 20 seconds behind, 50 km left.

Everyone is coming back now, but Realini is apparently somewhere in front of them.

Labous will rue that stage 3 disaster. She's been super strong the last couple of days. Cavalli's also had an attempt at getting away but they don't want to let her off the leash because she's got Brodie Chapman up the road as well, somewhere in the gap between Koppenburg and Realini.
Reactions: Samu Cuenca
You must log in or register to reply here.
Share:
Facebook Twitter Reddit Tumblr WhatsApp Email Link