RedheadDane said:
We already had a +30 degree heatwave!
And at least that was while I was on vacation, so I could stay indoors. Now I have to go outside.
Click to expand...

That was one day...
Reactions: Sandisfan
S

Põhja Konn said:
It is completely normal to have that kind of summer weather around at least the northern Baltic Sea area. However, that doesn't mean it is a prevalent weather every summer . Although at least shorter periods of that type of weather do occur in every summer. I live about 200k south of Helsinki and here it only takes the wind to turn into "right" direction - usually northwest - for daily max temperatures to plummet below 20C. Specially in early summer when the Arctic hasn't yet warmed up and the air flowing from there is freezing cold. In July and early August the cooling effect of the Arctic is not that dramatic, but when circumstances play out in a suitable way, a prolonged period of around 15 C summer weather with cold winds, cloudy skies and drizzling cold rain is entirely possible even in July.

This summer has been much better than that though. And currently forecasts show 30C heat here early next week, but I haven't checked if that reaches the northern shore of the gulf too.
Click to expand...

Long uphill sprint from Groenewegen to take stage 2. Good that the late crash didn't involve the cars more than it did.
Reactions: Sandisfan 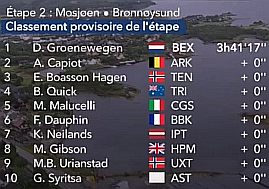 F_Cance said:
Groenewegen should be DQ
Click to expand...

They are talking about Groenewegen causing the crash earlier on as well?

I think the organizers should stick to the rules more - it's like they punish riders when there are crashes but rarely in other cases.
Reactions: Sandisfan
Y

I doubt Groenewegen did anything wrong - Hit a grass verge on the edge of the road causing him to lose traction which caused a chain reaction - I'm more interested in BEX 2023 recruit Blake Quick who finished 4th in the stage - Followed Groenewegen's wheel in the last 200 metres before dropping away in the last 50 metres.
Last edited: Aug 12, 2022
Reactions: Sandisfan

yaco said:
I'm more interested in BEX 2023 recruit who finished 4th in the stage - Followed Groenewegen's wheel in the last 200 metres before dropping away in the last 50 metres.
Click to expand...

tobydawq said:
That was one day...
Click to expand...

It was also above 30 degrees the day before.

If I had a magic thermostat, it would never get warmer than 23 degrees here.
Reactions: Sandisfan and RedheadDane

Netserk said:
It was also above 30 degrees the day before.

If I had a magic thermostat, it would never get warmer than 23 degrees here.
Click to expand...

Or the day after. Depending on which day you count as the (not-quite) one day.
But can I join your quest to make/obtain that magic thermostat?
Reactions: Sandisfan

And its Taco time.

The break has over five minutes with 50 k to go and the peloton hasn’t caught up at all yet. They‘ve let some strong rouleurs up the road with Van der Hoorn and Ballerstedt here.
Reactions: Sandisfan

Break has around five minutes with around 50 Ks to go.

Total has decided to put some energie into the chase. Time down to under two-and-a-half minutes with under 30 Ks to go.
Reactions: Sandisfan and Barnacle Bill

Bringing this back quite quickly now, just over a minute to the break, 15km to go.
Reactions: Sandisfan

Cofidis with another win. This time Lafay.
Reactions: Sandisfan

A .Pro race with that top 10. My God.
Reactions: Sandisfan

Plus a 2nd placed in a stage of this year's Tour and a former indoor cycling world champ.
Reactions: shalgo, Sandisfan, Jumbo Visma Fan :) and 2 others

Yeah come on you can call almost every WT pro rider good if you're gonna put the labels like u23 WC and top 10 Vuelta on Bystrom and Hagen lol. They're all decent, but it's just not good at all. This race is missing a big name or 2 to make it exciting.
Q

Plus a 2nd placed in a stage of this year's Tour and a former indoor cycling world champ.
Click to expand... Smart move from them to come here with a lot of point takers. Can't blame them. 200 points if it stays like that. Could be more, could be less after tmrw. They needed that. Between 700-800 behind Movistar after this week (also Polynormandie with Teuns tmrw). That's doable.
Reactions: Sandisfan
You must log in or register to reply here.
Share:
Facebook Twitter Reddit Tumblr WhatsApp Email Link