Technical Overview:
This stage. At the same time, the most intriguing and the most upsetting of this race. It starts in Venaria Reale, at the Royal Palace of Savoy, and heads immediately towards the mountains. The first difficulty of the day comes after just 35 km of ascending false flats. Colle del Lys (GPM2, 13,8 km at 4,3%) from the easy side is not much, but its will still be a key point of the stage, since the composition of the breakaway of the day has an enormous importance with this kind of design. The descent is very technical too, so it might be another important factor to consider. At the bottom the riders will breathe for 30 km of flat, that lead to the town of Susa. Here the peloton will hit the Cima Coppi of this Giro, one of the most famous recent climbs in the cycling world. The mighty Colle delle Finestre (CC, 18.5 km at 9.2%) is the only other monstrous climb of this Giro after the Zoncolan. Everyone knows it's features by now: extremely regular at around 9%, its top 8 km are on gravel. It starts at 91.8 km to go and ends at 73.3. One can hope. In any case, it's one of the prettiest climbs out there, so it's worth to watch it. The descent is quite short but very technical, and brings into the middle of one of the most classic climbs of both Giro and Tour. Sestriere (GPM2, 16.2 km at 3.8%) is full of false flats from this side (well, also from the other) and it will do damage only if something already happened on Finestre. At the top, 45.6 km to go. 23.7 km are descent, albeit very easy, to reach the town of Oulx. From there the riders will have to go 14.7 km of ascending false flat, leading to Bardonecchia, and then the final climb of the day will start, Monte Jafferau (GPM1, 7.2 at 9.1%). It is constant and very steep (without going crazy), always between 8-10%, but it's relatively short, so hopefully it won't be too intimidating to the riders. The last time the Giro came here we barely saw any pictures due to bad weather, so let's hope we are luckier this time. With the weather and with the race attitude. As I mentioned, this is the most intriguing stage, because Finestre is what it is and it's still within range for something to happen, yet this is also the most upsetting, because when you see Finestre you expect it to be the protagonist of the stage, and here it is unlikely that it will be. The worst part is the presence of Jafferau, which is a really hard climb and could very well be the incentive for every GC guy to wait for the last 7 km of the stage. Which would be a huge waste. If the stage ended in Bardonecchia (as, by the way, the official name of the stage would suggest) it would be much better, as Finestre would be the only chance for GC attacks. however, if the choice is between having Jafferau with Finestre-Sestriere vs having Jafferau with Sestriere alone, I gladly choose the former option and hope for the best. 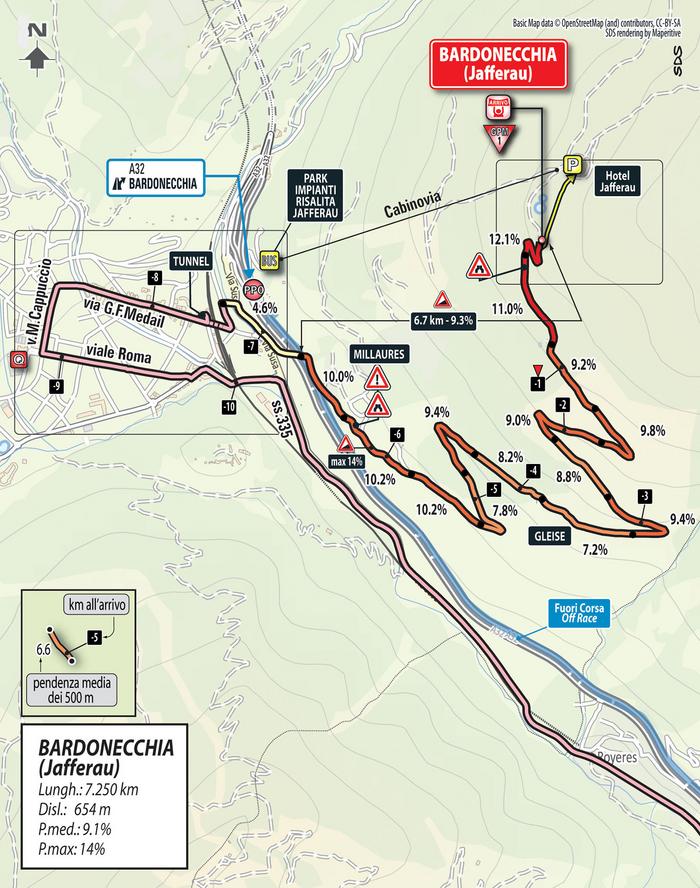 Colle delle Finestre (Cima Coppi, 18.5 km at 9.2%)
One of the most beatiful climbs in Italy, and it's also one of the hardest, being long, steep and with 8 km of gravel at the end. The good news for the riders is that it's very regular, just having a steeper ramp at the beginning and afterwards being always between 8-10%, so one can find his own pace and keep it.
It tops at 2178m, making it the highest mountain (thus Cima Coppi) of this edition, by just 43m over the Gran Sasso. It's been ridden in the Giro only 3 times, in 2005, 2011 and 2015, the latter as Cima Coppi, like this year.

Sestriere (GPM2, 16.2 km at 3.8%)
One of the most iconic climbs in cycling, because of the Giro and also the Tour. The riders will climb only the upper half of it.

What to Expect:
Let's start with the end: Monte Jafferau is a very good climb and should guarantee meaningful GC action in the last 5 km. The rest of the stage is very hard to predict. I believe an attack on Finestre (or even just on Sestriere) can work only if you have teammates up the road, which is why our chances depend on what happens on the first climb of the day. If the breakaway is irrelevant, we'll just watch the scenery. Still, Finestre should force a selection by itself, so maybe even the worst cas scenario is not that terrible...

Pozzo to drop everyone on Finestre en win the Giro.

what is the weather prediction? will we get wet weather on finestre?

It's on. The best final weekend we have seen and are going to see in years. So many people smell blood.

This can be a stage for years. Sky, Astana, Sunweb and Merida should put riders at breakaway and then the leaders should go all-out on Finestre. FDJ too, if Pinot has the legs.

Gents (and ladies), we have ourselves a race.

This stage could really be something. If it was the Tour I would expect that something to somehow fizzle. But the Giro tends to deliver.

That last kick looks to steep for Dumo, so I'm going to go with Lopez versus Froome for the win.

From what we've seen today, I wouldn't rule out Lopez from winning the entire race on this stage. The gaps could be huge here.

The whole stage is going to be insane. I reckon they'll start broadcasting from start to finish?

There's still a lot of snow near the road on the Finestre climb.

I hope it delivers for you all

I wonder how much Fabio Aru could make in bribes tomorrow.

This has everything to become an epic stage. Real bummer that this is on a Friday.


Mayomaniac said:
There's still a lot of snow near the road on the Finestre climb.
Click to expand...


Eclipse said:
Work has screwed me and I'm so excited for this as a stage T_T

I hope it delivers for you all
Click to expand...

Yeah, i can't watch it either.
B

Pozzovivo, Dumoulin, Froome and even Lopez with these legs gotta put someone in the break and try to drop Yates on Finestre. Could be carnage.

Eclipse said:
Work has screwed me and I'm so excited for this as a stage T_T

I hope it delivers for you all
Click to expand...

Yeah, i can't watch it either.
Click to expand...

Yeah, I have an important lecture that I can't skip, maybe I'll be able to watch the final.
D

Surely Sky have to put Poels to work on Finnestre and see what damage they can get done. Especially if they get riders in the break. Bahrain doesn't have enough strength to blow the race apart, Sunweb is slightly stronger but idk. Seems all down to Sky to shake it up.

Don Froome Quixote will ride with Sancho Pozzo Panza into the sunset.

Poels to launch a long range attack and get his 10 minutes back only to lose the jersey on the penultimate stage.


deValtos said:
Surely Sky have to put Poels to work on Finnestre and see what damage they can get done. Especially if they get riders in the break. Bahrain doesn't have enough strength to blow the race apart, Sunweb is slightly stronger but idk. Seems all down to Sky to shake it up.
Click to expand...

Kiry, Lulu and Visconti in the break and we are on. Poels to shred the field on Finestre, Froome, Lopez and Pozzovivo to attack.