good to watch him just blast up the mountain, then kill in the sprint after almost 6 hours on the bike.

the greatest era of cycling and Hinault is the best example of those wonderful years...

that brings back memories. I was living in Spain then, thought the Badger was from another planet.

Bernard Hinault is arguably the best bicycle rider of his generation…and possibly of all time (with the exception perhaps of Eddy Merckx). Five times a Tour winner, winner of the Giro, the Vuelta, and just about all of the Classics (that matter), he was a fearsome competitor on the bike, earning him the nickname the “Badger”.

To get a glimpse of Hinault’s ferocity, one only has to watch the video of him on the podium in Nantes during the 2008 Tour de France (ironically, Gitane are manufactured in Machecoul, just on the outskirts of Nantes). Below is a link to a video showing him shoving a protester off the podium during the awards ceremony (link not affiliated with GitaneUSA.com): http://www.youtube.com/watch?v=CXLSUpPS6So

Hinault started his professional career with Gitane. Recently, GitaneUSA forum member Nicolas Lelievre was fortunate enough to meet Hinault and spend some time chatting with him about Gitane, his pro career, and related topics. Included below is the translated interview.

Special thanks to Nicolas for sharing this with us, and of course to Bernard Hinault!

Q :Many fans wonder what was your contribution to the development of new material for Gitane bikes and how it was done ?

A:It was mainly for try-outs, the whole research & development was done by the “Régie Renault” which had a wind tunnel and gave us an advantage. Most of the time, we just confirmed the data by riding the bike. It was done on a track.

The track was supposed to give a “neutral” environment?

Especially for the wind. We’d go for 3 laps with one bike, then 3 laps with another while maintaining the same heart rate & BPM and comparing times afterwards.

The heart rate was your benchmark?

Yes. The bikes were configured the same way, you had to maintain your position and do your 3 laps. Sometimes 5 times in a row.

I know you have not used them in a race but what about deltas?

Not these but the first “profil” we tried.

The design was new, were you surprised at first?

When you want to search & win, which I always did, and someone tells you that thing is going to make you go faster, there’s no point in arguing. The rider is here to test and bring his knowledge.

Were you frustrated not to have these when you started “La Vie Claire”?

Well, I used this experience a little…the frames that were made were also inspired by what I had seen at Gitane.

Gitane bikes were always factory made or handcrafted outside the factory, then painted?

In fact, from what I’ve seen, they were handcrafted…in the factory. The best workers were assigned to the professional bikes.

So there was a special treatment for these?

Yes, this is a bit like a luxurious car. Depending on the rider, the frame had to be shorter here, longer there…it had to be top notch. And the material that was used was not available for retail. We’ve had Reynolds 753, 531…3/10, 5/10…not many people could use that.

We are intrigued by a particular bike that you used in 1983 for the spring classics. Instead of being blue, it was chrome coloured with a little badger on the front. You won the Fleche Wallonne with this bike. Do you remember it?

Not at all (laughs)…No…anyway, that was a Gitane. It could have been a prototype?

Well, you won with it so it was probably a good bike (laughs)…

Yes, I think that must be it. It was probably a prototype with new material…I don’t know why it came out like this.

Regarding Campagnolo groups, did you prefer Super Record or C-Record ?

I don’t remember the specifics…when you get the best possible, that’s all you’re interested in. Whatever their name was, we didn’t care. The important thing was to get something good, working and having no trouble.

Let’s talk about Look. In December, we talked about the fact that the first Hinault frames with La Vie Claire were in fact Motobécane and then Look came with their carbon frames. What about the aluminium Look frames? Who manufactured them?

I don’t think we ever got aluminium frames.

During the 1986 Tour de France, 2 types of frames were used, the black carbon ones and the other ones, white with La Vie Claire colors…

Ok. There is a question about gears. What was the typical gearing used in an ITT ?

Typically it was 54x12 or sometimes 53, maybe 55 once I think…then again it largely depended on the profile of the race, it means nothing without it. If the wind comes from the tail you can try an extra teeth, if it’s up front you can go down to 53x17 instead of 12…It means nothing…

I don’t think they get much bigger than we did…

Same question for the mountains?

Still, you have to be able to use this!

I imagine, at this kind of levels (laughs)…Ok. If the UCI had not interfered, where would we be now, in terms of technology ?

Fairings all over the bike…that’s where it was going. Or else you could organise 2 leagues, one with the UCI regulations and the other totally free.

How do you think the credit crunch will impact pro cycling?

I think it will be the same as other sports. Lower budgets and some (sponsors) will probably drop cycling altogether.

It will get harder to get a sponsor…

Yeah, then the athlete will have to show a sponsor he can count on him…

Yeah, because if you get results, you’ll find a sponsor. What are they looking for if not results?

Right. Do you recall your VO2 max at the time ?

And what your lung volume ?

Not that big, 6.6 liters, 7 liters depending on the measuring machine.

Wow…beautiful machine…ok, you have a fan from Sweden named Stefan who tried to build a bike on your specs. The data came from a Miroir du Cyclisme article from Claude Genzling but the bike appeared to be unstable. The question is: have you kept the same specs for your whole career?

It evolved a lot when we got into that wind tunnel. That’s where we figure out that I needed something special because my femur bones are unusually long and my frame has to be tipped up backwards with 54 in height and 56.5 in length with an angle of 19 at the rear instead of 17.

But surely these long femur bones have been of some help, haven’t they?

Surely they are important levers. The wind tunnel made us realize that. It took us 2 years to get there and modify my frames but by 1979 it was ok.

So, there was no modification after 1979?

Last technical question: did the Italians realize they were behind Gitane in terms of development and did they try and copy ?

I think that what Moser achieved with his hour record came from that, at least a part of it. That’s sport. Everyone can improve on aerodynamics.

Do you have a favourite bike from the days you were competing?

No, since the specs were the same, I was not better on one or the other…

In fact, you see bikes as tools, there is no particular attachment to these machines?

No, it was a working tool we could improve with new technology.

All right. This is a “light” question: do you know the name of the dog that made you fall in Paris Roubaix ?

No. I know it was a black poodle with a red collar but…it didn’t give me its name ! (laughs)

Now a lot of people speculate about the 1985 & 1986 Tour de France with Greg LeMond. Before your attack towards Pau in first mountain stage of 1986, had there been a briefing of some sort for the team?

No. I was just trying to figure out who were our strongest opponents and it went off in a weird way. It was just a hot spot (those little sprints along the way) and we took our opponents by surprise but that’s the race. We didn’t wait for the mountain, there was still 30km to go there but we went out with Jean François Bernard just like that, without thinking about it that much. The idea was that if we got caught then Greg LeMond could counter attack. One of us had to go for it.

In December, you told me about the dilemma for the 2009 in the Astana team. You thought that the crucial move was to take the yellow jersey first in order to control the other teammates. Was this what you were doing in 1986 with Greg LeMond?

Not at all because I had given my word to Greg LeMond. The goal was to start a panic among our adversaries but nobody moved.

It took you by surprise.

Yes and in this case you take what you can.

So when you attacked again the next day, was it 100% for Greg LeMond or did you think it could work again ?

I didn’t think it could work. And I did attack in a descent…the other riders had to come after me.

At the Alpe d’Huez, many people are convinced that Bernard Tapie orchestrated the stage, or was it all improvised?

It’s just the joy of winning…

Do you remember what you and Greg spoke about at the time?

I don’t remember…since he was getting the yellow jersey, I was to win the stage, like I did with Jean René Bernaudeau in Italy.

When you fell in the 1985 Tour de France what did you tell Phil Anderson? Is he the one that made you fall?

The next day I wanted to make him crash too. But I said to myself : “What if you kill him ?” because in a fall you never know how it can end up…I just told him to stay away from me.

You think he did that on purpose?

That would have been very dangerous, he got hurt too…

Would you have liked being a pro rider in today’s peleton?

Every era is magnificent. I would have loved to compete today, 35 years ago, 40 years ago…when you love competition, you just love it.

If you had had to compete with Lance Armstrong, what would have been your strategy ?

Depending on where you stand compared to the other, you have to improvise.

And a strategy for this year’s Tour?

Being in what team?

That’s the question…not being in Astana?

I try to attack. For the first 15km ITT we see where we stand…If I take the jersey I try to control…

…As you did so well.

If an opportunity shows up in the mountain, I don’t hesitate, I jump in.

They were running for the 2nd & 3rd seats…

What was your toughest race and why?

…Let’s say the one where you were hurt the most.

Maybe Liège Bastogne Liège. It still hurts years after that.

usedtobefast said:
good to watch him just blast up the mountain, then kill in the sprint after almost 6 hours on the bike.
Click to expand...

No doubt he hammered that race but beating a few climbers on a velodrome doesn't impress me nearly as much as when he won on the Champs-Élysées wearing the maillot jaune.

md2020 said:
No doubt he hammered that race but beating a few climbers on a velodrome doesn't impress me nearly as much as when he won on the Champs-Élysées wearing the maillot jaune.
Click to expand...

And to do it twice!
B

Thanks for posting this tub

md2020 said:
No doubt he hammered that race but beating a few climbers on a velodrome doesn't impress me nearly as much as when he won on the Champs-Élysées wearing the maillot jaune.
Click to expand...

he does embody "panache" 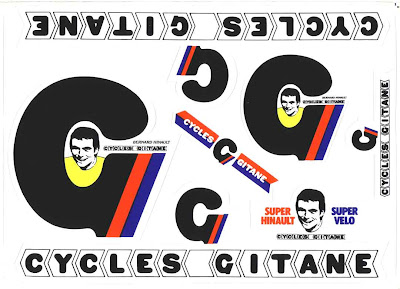 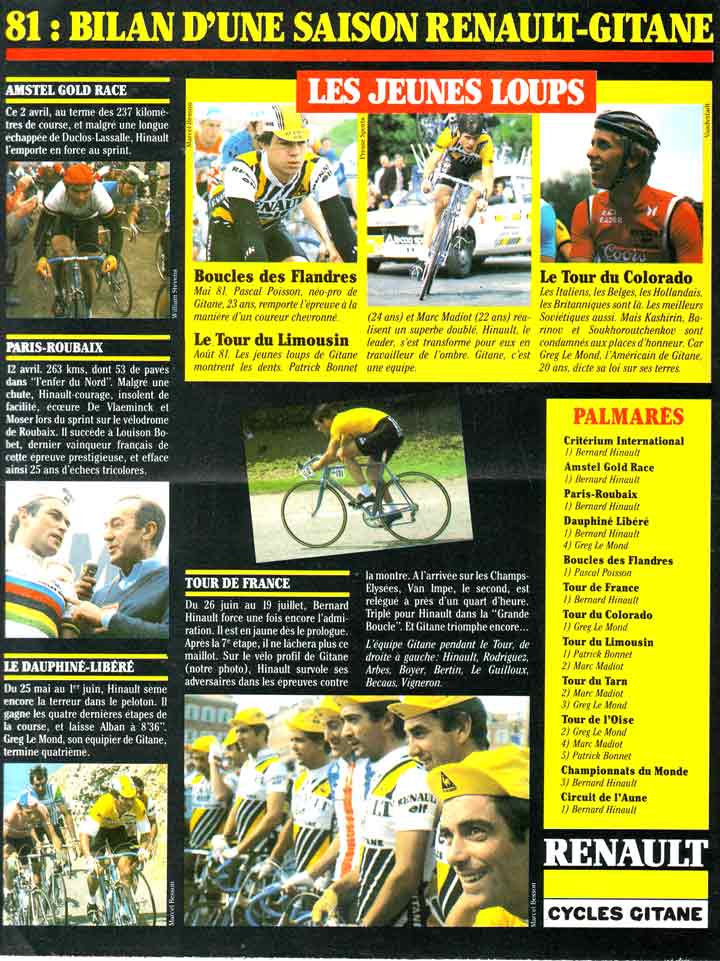