Ok I am posting this here because these lying *******os said they were going to publish their biological passport values on their website.

Not only have they not done so, but they did receive a wild card entry to this year's Giro, despite the two positives in last year's race.

YellowFluo-Neri Sottoli manager Luca Scinto has defended his team’s wildcard invitation to the 2014 Giro d’Italia, insisting that it is a different entity to the Vini Fantini-Selle Italia squad that had two positive tests for EPO at last year’s race.
...
...
Asked if it was a surprise, considering their two positive tests at last year’s Giro, Scinto said: “I don’t want to talk about last year, where 40 people risked losing their jobs. This year is different. Fantini has started its own team and we are YellowFluo, an all-Italian team, one that pays all of its taxes in Italy. We’re a new team, we’re starting again from scratch.”

The Tuscan spent much of the last year’s Giro fending off questions about Santambrogio’s eyebrow-raising run of early-season form, and with that in mind, perhaps, he said that YellowFluo will publish its riders’ blood values on the team website in 2014.

“We’re going to publish all of our riders’ biological passport data on our team’s website. It’s something we’ve looked at to show that we don’t have anything to hide,” said Scinto. “I’m happy because we wanted to rebuild. This is a new team and we want to find important sponsors to grow the team.”

taking a leaf out of sky's book

Ha, did you really believe Scinto?

It's not an issue of whether I believed. It's that it needs to be brought to their attention, and the attention of the media, and the question posed: when are you going to do what you said you were going to do?

They should have signed Horner..

Of course he didn't believe, but that doesn't means Scinto doesn't deserve to be ridiculed.

It also points to how the sport has not changed. Transparency is the new buzzword.

Not surprised they haven't published anything. And yep, they're clearly one of the most doped teams out there. But I give them a pass for their awesome fluo yellow highlighter kits.

They combined their fluoro kits from last year with the CSF Navigare 2008 kits.

This could be the funniest yet.

Hahahaha Katusha what a fail

Yes, just like I trusted all UCI Pro Tour teams to publish their medical staffs...

Funny sh!t, Katusha once was transparant, untill some peeps on this board - and others - linked their medical staff, helais; page no longer accessable...

Luca knows how to PR.

They only beat Katusha and Lotto, so it's at least a bit more believable than last year.

Dear Wiggo said:
They only beat Katusha and Lotto, so it's at least a bit more believable than last year.
Click to expand...

I bet RCS came down on Scinto like a ton of bricks and told him to act like the conti team they are and show meekness!
D

Benotti69 said:
I bet RCS came down on Scinto like a ton of bricks and told him to act like the conti team they are and show meekness!
Click to expand...

You think the Highlighters have been invited as pack fodder?

Dazed and Confused said:
You think the Highlighters have been invited as pack fodder?
Click to expand...

They are invited due to Scinto's begging as without the Giro they probably fold, like Acqua&Sapone. Probably see fluro riders trying to breakaway every day....
L

who's friend of Scinto in BMC

today there's an article in l'Equipe about Neri Sottoli.
When asked about Di Luca and Santambrogio, Scinto said, of course, that it was not his fault. Di Luca was because of the owner of Vini Fantini. But about Santambrogio I was a bit surprised...
Scinto explains "je l'avais récupéré sur les conseils d'un technicien de la BMC."

To confirm I googled a bit and found this article from JF Quenet, a journalist with L'Equipe, last year that explains many things and in particular that the Fluos were the garbage bin of BMC following a deal between Sciandri and Scinto.
Nice !

SBS commentators are going on about Andrea Fedi from Neri Sottoli. Apparently he was in every break during the Tour of Turkey, and has been in the break for 3 of the stages at the Giro (and 4th now today).

Not sure why the commentators are talking this up, but they seem to feel it is noteworthy.

Bandiera is in the break for the 11th time today, or so...

The new clean era joke just added another punchline. Sky learned that lack of credibility means nothing. Behaving like it was 1995 and not being honest about publicising data is apparently a-okay with the cycling media. This should be big giro news but I have to use the clinic to have the hypocrisy revealed.

I'll contact the Danish tv cycling coverage and aks them if this is not newsworthy. Perhaps their journos could even approach the team and riders for comments - just like they did in the 90s with all those toe curling interviews with Riis. Nothing says cycling coverage like an awful denial.

I cannot find the list I saw a couple of days ago (help!) but the 2nd, 3rd and 4th positions on the Coppa Italia were all occupied by Neri Sottoli riders.

They have tied up the overall team placing, meaning they are meant to get an auto wild card to the Giro in 2015, but there are murmurings that that wild card is subject to ...

“The team that wins the cup has the right to race next year in the Giro d’Italia,” race director, Mauro Vegni told website Tutto Bici.

“The team, however, is subject to the usual economic and ethics criteria and that gives us the ability to accept or to reject it despite winning the cup.”

Dear Wiggo said:
I cannot find the list I saw a couple of days ago (help!) but the 2nd, 3rd and 4th positions on the Coppa Italia were all occupied by Neri Sottoli riders.

They have tied up the overall team placing, meaning they are meant to get an auto wild card to the Giro in 2015, but there are murmurings that that wild card is subject to ...
Click to expand... 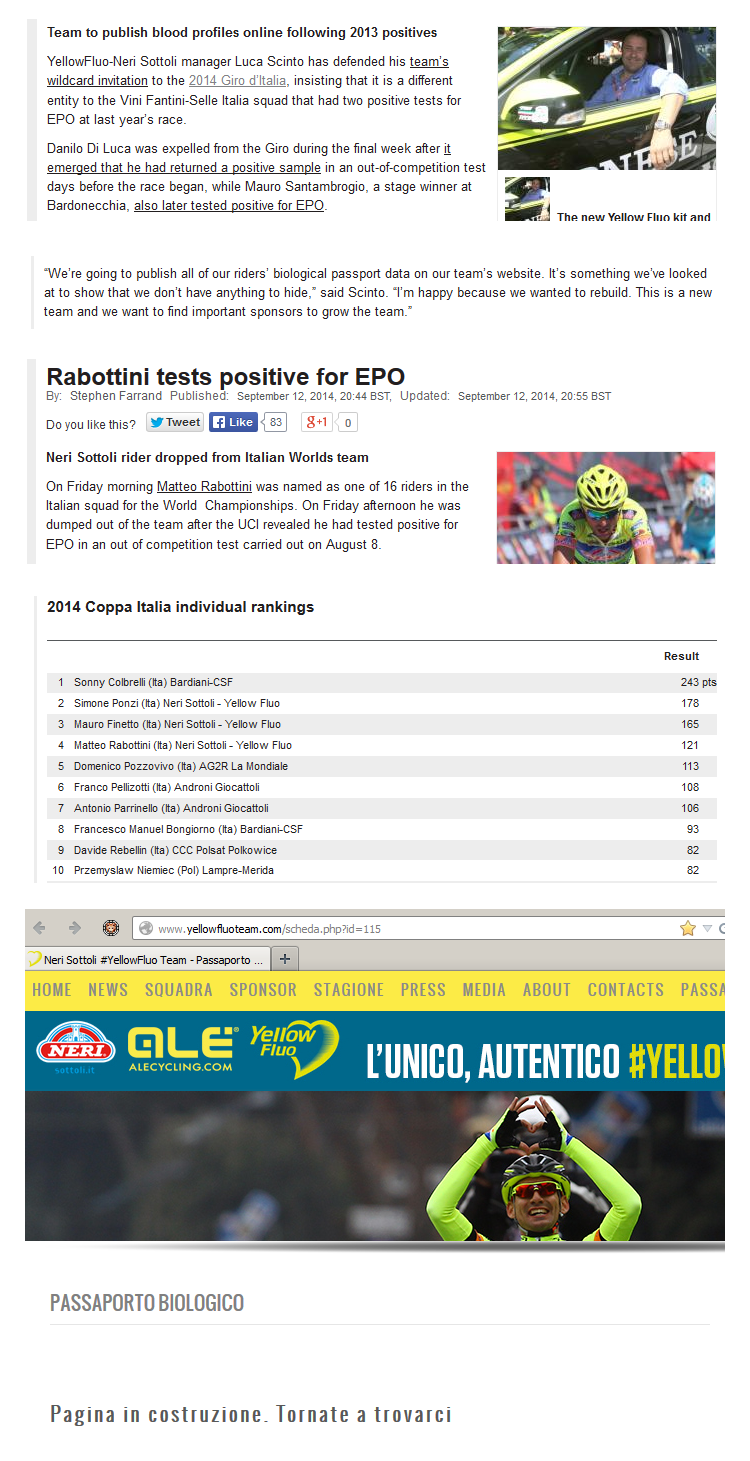