Makes his King Kong look like an Apocalypse Now work of genius.

Whatever you do, don't see the 48 fps version.

Whatever you do, don't see the 48 fps version.
Click to expand...

Hey! Apocalypse Now was a work of genius!


I may be forced to watch it over the holidays, I'll try for the monkey wrench.

ElChingon said:
Hey! Apocalypse Now was a work of genius!
Click to expand...

Yes it was. If Apocalypse Now is at the highest point on the roof of the house, King Kong is way down below in the basement and The Hobbit is somewhere underground with the morlocks. It was like watching a piece of crap made by Disney.

The 3D 48 fps version looks weird. It is hard to describe.

Since none of the dwarves are developed with the exception of Thorin, take this handy cheat sheet with you to keep track of who is who. 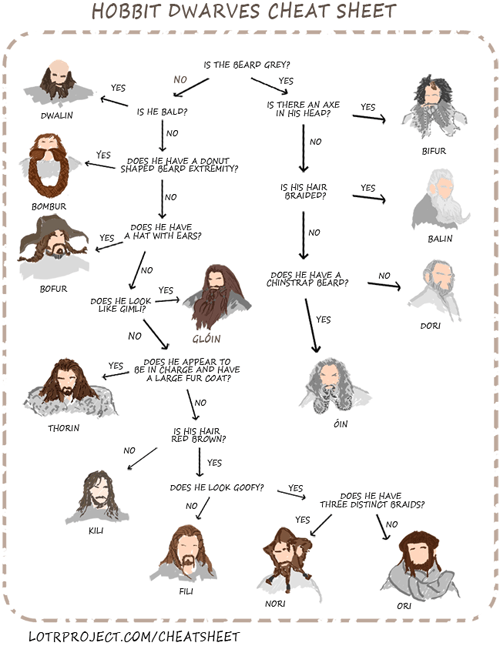 Don't be ridiculous - watch it in 2D. I haven't heard anyone yet who's actually liked the 3D version. Personally I ****ing hate 3D in general so easy choice for me.

I actually thought it was a great movie until Rivendell. After that it became a bit messy with some very silly fighting scenes. Like most other movies made these days the action scenes were far too long.

Agree with those who found it disappointing

I liked it. It reflected well the atmosphere of the book. But the story could have been told in half an hour less. This felt more like an extended version.

Lincoln the best film in a long, long time, but you have to have the knack for the history. Day-Lewis nails the unknown Lincoln that washes away the idealic but not the heroic. I never really liked the fim efforts of great books like the Hobbit and the The Lord of the Rings.

Just a plug for it and off-topic aside from current cinema. Lincoln: A epic perfomance by many and well worth seeing on the big screen.

BroDeal said:
Whatever you do, don't see the 48 fps version.
Click to expand...

Wait a minute! I thought the 48fps version was supposed to finally show 3D at it's true potential. This was the film that was going to break the barrier and make everyone want to watch every movie in 3D. No?

Interesting that you bring up Apocalypse Now. That film is revered for changing cinema. Which is what the whole new 3D 48fps idea was supposed to accomplish with the Hobbit.

As to story, well, you know, wait, you say it's way too slow? But isn't this the first of a trilogy? Well, there's a lot of merchandise to be sold.

I'll probably see it and skip Lincoln, unless there's a 3D 48fps version of Lincoln out there.

Well Alpe, technical changes do not usually result in art. "Apocalypse Now" is art. PJ's "The Hobbitt" - which I've yet to see - is ONE book being made into THREE films!?! PJ is trying make as much $$$$$ as possible and recapture what he had in LoTRs; and even those films were a bit too long and melodramatic. CGI is nice as an additive, not as a staple and crutch. 48 fps/3D? The word is that it takes the better part of an hour to grow accustomed to it and then, while action scenes are OK, standard shots look like bad daytime TV soap operas shot not on film but digitally and with bad lighting. PJ ... he has his cash cow and is seeking his former creative art - but still wanting $$$$$. Interesting and sad at once.
D

There are a lot smart guys on IMDB that know alot about movies and give reasonable scores to the movies. They can't always keep up with the 10/10 fan boys, though.

I was being sarcastic in my post, while trying to stir the pot. For the record I can't stand 3D, it's a gimmick. The entire "realism" of 48fps means nothing to me. As you say, soap operas look "real", but that doesn't mean they're any good, or that I want to watch them. Higher frame rates work well when I'm watching something like some nature, or sports. There is magic in cinema at 24fps. I can handle digital production, and do think it's the future, as long as it's shot like and treated like film. Recent movies by David Fincher and Michael Mann come to mind.