Page 85 - Get up to date with the latest news, scores & standings from the Cycling News Community.
Sidebar Sidebar
Next
A

Nice little drama today between Pauwels Sauzen's teammates and Baloise Trek tactics to win the overall. Not the worst of races.

So, tomorrow we're up for a snowy one? I see that Antwerp is forecasted to have minus 5 degrees (thermal feeling of minus 12) at 15h00 with snow. We don't have Villars but we could end up with a good test run for Winter Olympics.
Reactions: TourOfSardinia
J

I switched from this race to Besseges at lap 4 or 5 where the three teammates were all riding together and the next rider was a minute down. How did Iserbyt lose nearly a minute?

jono said:
I switched from this race to Besseges at lap 4 or 5 where the three teammates were all riding together and the next rider was a minute down. How did Iserbyt lose nearly a minute?
Click to expand...

Not the best of races to watch in the end. Obviously it was all about the battle between Iserbyt and Aerts, but in the end it just looked like Vanthourenout and Sweeck were on a coffee ride for most of it. Definitely the two who will probably be the best prepared for tommorrow in terms of freshness, considering they looked to be coasting round today. Although if it's still the predicted heavy snow, ice and temperatures of minus it could be interesting. We've seen before Iserbyt doesn't like the cold that much, so I hope we don't have a situation of Aerts riding off, and then Vanthourenout, Sweeck and possibly Kamp dragging Iserbyt around to keep him in that time ahead of Aerts.

Great racing today in both races. Was good to watch. Shame about Cant getting a puncture. Not usually a Cant fan but as she hasn't won such a big race in so long, it was disappointing to see her slip back due to a slow puncture.
Reactions: TourOfSardinia

Bakker blew it in the last lap vs. Betsema. Was handed a gift when Betsema stumbled, then she herself tripped. Argh.
P

Bolder said:
Bakker blew it in the last lap vs. Betsema. Was handed a gift when Betsema stumbled, then she herself tripped. Argh.
Click to expand...

Well in fairness, she would only have (maybe) won due to Betesma blowing it. They both screwed up at the same time, though Bakker was down a few times today. I feel sorry for her, to me she has been the most consistent of the U-23s this season, but had a bad day at the Worlds. Would have been nice to see her win one.

Have enjoyed the Ladies races far more than the men's side this season, even though Brand has been the best, there were a lot of close races. Last week at Lille was the best race of the season IMO with 5 in contention heading into the final lap and Alvarado just edging the sprint after a constantly changing race situation. Men's has been too much VDP v WVA off the front dominating even though it was engrossing at times.
Reactions: Bolder

The Brussels course is growing on me. I wasnt a fan of it the first year, but after seeing it in different conditions (relatively dry 2019, fairly muddy 2020 and icy/slippery/a bit of mud 2021) it definitely has a tough technical nature to split the race up. Out of the three more urban crosses, Diegem is still the best, then Brussels, then that rubbish course in Kortrijk.
Reactions: Axel Hangleck
J

Is there a men's rider that can make the best case for being the best non-Mathieu, non-Wout rider this season?
A

Good question; early season Eli was on form and claimed the European title, and Michael won the Tabor World Cup. Since the Worlds, a few have taken their opportunities; Laurens, Quinten & Toon.

In other news, I saw on Cyclocross 24 that Sporza asked about Sweeck changing teams. Also Blanka Vas moving to Trek?? Anybody know anymore?

Axel Hangleck said:
Good question; early season Eli was on form and claimed the European title, and Michael won the Tabor World Cup. Since the Worlds, a few have taken their opportunities; Laurens, Quinten & Toon.

In other news, I saw on Cyclocross 24 that Sporza asked about Sweeck changing teams. Also Blanka Vas moving to Trek?? Anybody know anymore?
Click to expand...

Mettepeningen, Sweecks team manager, said otherwise and that he wanted to extend the contract from 2022. Vas moving to Trek makes sense. She does CX, XC and Road so would have either Trek Factory racing or Trek Baloise for CX, TFR for XC and maybe Segafredo for road (like Brand and Anrooij)
A

Yes, I saw that, as well - it's all a bit strange.
However, the Vas move makes sense; top U23 MTB XC & CX rider - and TFR will likely have budget since Batty left.

In a sporting way I would like to see Laurens leave Pauwels Sauzen.

Alpecin needs a rider who can fight for the win when Van der Poel is not around (and his brother is now on their sister team, Credishop) and would also be good for Hens Maes to be more represented on the front.

Vanthourenhout and Iserbyt (with Kamp coming up) give Pauwels Sauzen already a good dominance. Let Laurens lead somewhere also to give more competitivity to the sport.

If you add Ronhaar and even Meeusen (to a lesser extent) coming through, then he definitely needs some freedom from the amount of talent in the Sauces team. The ones you say make sense, but to be honest maybe even Trek Baloise would work. At the moment they only have Toon Aerts and Van Der Haar. Aernouts is retiring and Thijs Aerts hasn't really shown at the top like he had in the u23s. The only other rider coming through at the moment is Thibau Nys. Plus he rode with Crelan KDL Trans which was linked with Sven Nys.
A

Two rounds confirmed for the World Cup; Rucphen (18th Dec) which hosted the Dutch nationals in 2020 - and Val di Sole (12th Dec) which hosts the MTB Worlds in August; and is likely to be the 'winter/snow' round of the series. One hopes they make use of the many climbs at the venue.
Reactions: Wyndbrook, Kaptain Kool and lemon cheese cake

It hasn't been mentioned in this thread but I can't start talking about the new season before mentioning that Jolien Verschueren has passed away this summer, not resisting her fight to a brain tumor. She had made a brief return to the fields after a initial success in fighting the big C but unfortunately the disease came back. May she rest in piece.


Now, the next season starts next saturday with the Ethias Cross in Lokeren. It will be the first year with the 16-rounds World Cup (hopefully), so let's see what that brings to the sport.

Regarding transfers I didn't see any of particular notice, the only ones noteworthy may be the merging of Credishop-Fristads with Iko-Crelan and Alice Maria Arzuffi leaving 777, who welcomes Aniek van Alphen.

Regarding the mens, I have a feeling that MVdP will have a big rival this season, and that rival will be called Thibau Nys.
Reactions: postmanhat
M

Thanks for sharing… sad news indeed. Always terrible to hear someone so young taken away so early in life.

P.s. Why Thibau Nys? Can’t remember him showing anything super special at the tail end of last CX season or has he been lighting it up elsewhere recently?

Mick Dundee said:
P.s. Why Thibau Nys? Can’t remember him showing anything super special at the tail end of last CX season or has he been lighting it up elsewhere recently?
Click to expand...

He's been on fire on the local road scene from the reports I've been seeing. His turn of speed on the uphill finish of the U23 NC was impressive.

At least on the punchier circuits I'm counting on him, don't know if he will be at same level on the muddier grinds tho.
Reactions: Mick Dundee 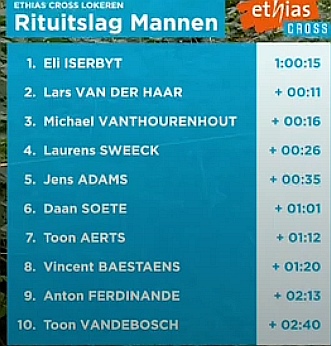 Good racing in both men's and women's although alot closer in the women's. It'll be interesting to see where the front three of van Alphen, van Empel and Betsema sit compared to Alvarado and Brand when she starts her season. Obviously it's early days and van Alphen won last year but didn't really feature right at the front when the top riders raced, but maybe a year older, greater development and now directly on the same team as Worst might all help her. Speaking of Worst, it'll be interesting to see where she site as her season wasn't as great last year. Preparation was possibly partly disrupted by that mtb accident in the summer so hopefully she's had a more fluid build up this year. Maybe some speed and skills from Vincent Baestaens has rubbed off her!

Looking at the men's results it's interesting Meeussen and Meeusen finished in very similar positions. I know Witse has an extra S in his surname, but I seem to remember seeing somwhere they're related. Can anyone confirm this? Also is Bailey Groenendaal Richard's son?
A

After watching MTB during the summer, I often find the early season CX races seem a bit lame (which is a bit harsh); however another few weeks and I'm all in for it.

I think in the men's, they need to make hay whilst the sun shines; it seems that the big 3 won't return until December; that's a lot of races to rack up the wins. So we should get some good racing.

In the women's it's going to be another Dutch domination; the best of the rest is likely to be Honsinger, unless Cant can recover some form. Then there are the MTB-ers, who haven't got the Olympics on the horizon.
Reactions: postmanhat
You must log in or register to reply here.
Share:
Facebook Twitter Reddit Tumblr WhatsApp Email Link