Page 88 - Get up to date with the latest news, scores & standings from the Cycling News Community.
Sidebar Sidebar
Next

"He is set to miss at least the first four rounds of the UCI World Cup as well as several rounds of the Superprestige and X2O Badkamers Trophy, so his main focus will likely be the Worlds in Fayeteville, USA, in late January. "
Reactions: postmanhat and glassmoon
S

I mean he has already missed four rounds of the World Cup and two rounds of the superprestige so it tell's us less than we knew already.
Reactions: postmanhat and Axel Hangleck
A

Yeah, that is a 'non story' really. We already knew that - and he won't be back until December, probably. I'm wondering what bike he'll ride for CX; unlike the MTB, Pinarello actually have a dedicated CX bike, the Crossista. Unless he rides an unmarked Crux......

It's really nice that they've honoured her in that way, as when she was up at the front she was a pretty classy rider. Like CX Hairs/Bill Schieken on twitter, I do agree that they should honour both races with her name, like the Hotondcross outside Ronse is reffered to as the GP Mario de Clerq for both men and women.
Reactions: jmdirt and Axel Hangleck

Bit muddy in Overijse. A trio consisting of Betsema, Vas, and Pieterse have a bit of a gap.

Aww... Blanka is so cute getting interviewed.
Reactions: Lui98, Pantani_lives, jmdirt and 3 others
A

That was impressive by Vas, as was Pieterse, but maybe once again faded slightly. And another fabulous ride from 18 yo current junior MTB World Champion, Line Burquier. The future is now.
Reactions: Lui98, jmdirt, Monte Serra and 2 others

Decent races in both womens and mens races. I think Betsema was looking strong in the early race, and i don't think either of Pieterse or Vas would've got back to her had it not been for her slip and slide, and then wipe out. I do feel the front of the race was decided early with many changing (I assume from a less agressive tread for the long uphill) on the first half lap. Brand and Honsinger, who really needs to work on her starts I feel if she wants to challenge for wins, were the only ones to really come back from that.

Hermans may have the power and skill, but he seems to be in a similar situation to Yara Kasteleijn from a couple of season ago. He's always having incidents in every race, with the only real clean one being Fayettville where he won. Its good to see another nation in the top ten other than dutch or belgians, but that never seems to be something that's consistent, both in terms of the having the same non BeNe riders there and having non BeNe riders consistently in the top tens. I feel it will be interesting to see how Cameron Mason does. With the UCI points being reset he's came from the back of the grid the past two weekends, but a 17th and now 9th should give him a healthy boost on the grid over the next couple of weeks. It'll be interesting to see how how fairs in the europeans next week and the rest of the season in some of the u23 only races.
Reactions: jmdirt, Axel Hangleck and postmanhat
B

Iserbyt had a nice win today on a greasy course. Aerts had the power edge but ran out of gas half a lap too early, and also got cleverly blocked by Vanthourenhout. Hermans must be pretty frustrated at his performance today, couple of bobbles and he was spit out of the lead group.
Reactions: jmdirt and lemon cheese cake

Thought that was a fantastic women's race and what a top ten. Half were aged 20 or under, and half weren't Dutch! With Neff, Richards and Vos all to return, this should be a great season.
Reactions: jmdirt 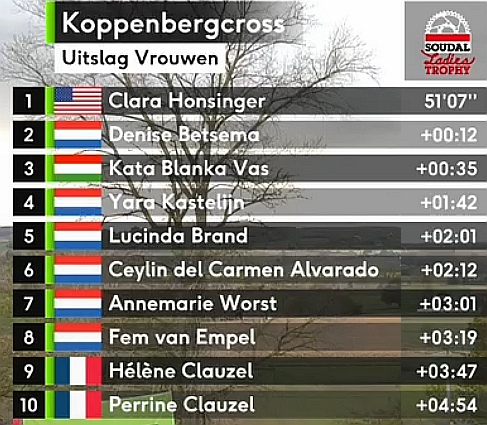 Great win by Honsinger...always exciting watching her coming through after a poor start
Reactions: postmanhat, jmdirt and Sciatic 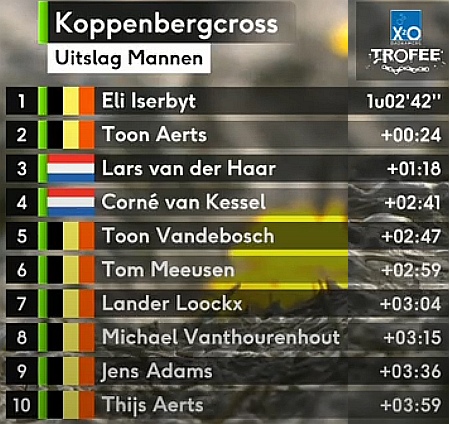 Today was the first race I have been able to watch this season, great to see some cross action again. Ladies race was again very good, real spread of talent at the moment making it far more interesting than the mens races. Good to see the non-Dutch riders emerging as it was becoming very Dutch dominated(not that I have anything against the Dutch).
Reactions: postmanhat and jmdirt
A

postmanhat said:
Thought that was a fantastic women's race and what a top ten. Half were aged 20 or under, and half weren't Dutch! With Neff, Richards and Vos all to return, this should be a great season.
Click to expand...

We know Vos will return, but I'm not sure the other two will. However, if on her improved form, a muddy Fayettville could be the type of course were Evie would do well on.
A

1 race already done; and not a massive surprise.

Massive effort by Ryan Kamp to take the U23! 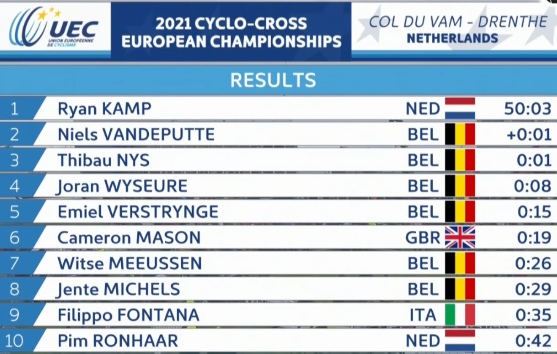 I don't know what was more ridiculous. Kamp pitting in the last lap with a good advantage when it was always clear that pitting was way slower than the normal route or the Belgian battle of the egos with Nys closing Vandeputte in the last portion of the lap and bringing with him Kamp. 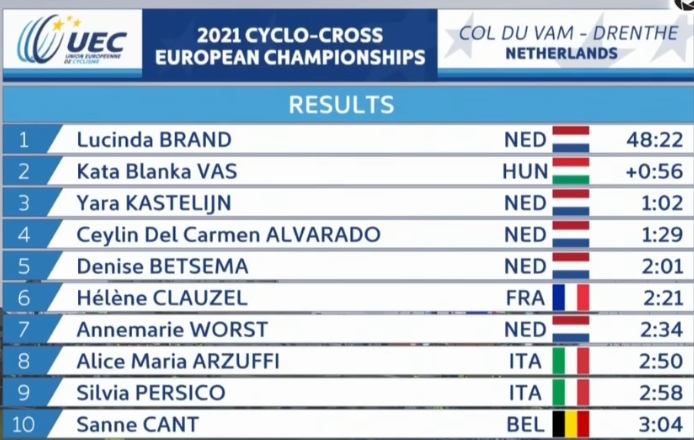