I already went through the details in the other thread, haven't changed my opinion on the 2/10 though.

Positives
Negatives
If the Navacerrada stage had continued to Bola del Mundo, this would be 1/10 and definitely the worst GT route this century. As it is, it's still up there with the likes of the 2009 Tour. It really is that bad, almost no redeeming factors.
Reactions: Sandisfan
C

It should suit Roglič, has TTT, ITT looks rather good, some crazy MTF, some potential ambush stages .... Don't know yet about bunch sprint stages but overall it does look like no specially crafted lottery stages involved. Can't overlook the past three Vueltas. The field will likely be strong. Likely relaxed, holiday spirit and some cerveza ...

I haven't even checked it out but the PWU option looks to good to pass.
N

Six, it's the Vuelta. It's funny that people always complain if we complain about Giro and Tour routes decadence but then complain about Vuelta route that has always been a discount version of a GT, even if generally enjoyable racing wise.
O

The toughest side of the Sierra Nevada climb is good, but otherwise this is really uninspiring. Is it so difficult to create a stage with a descent finish or an other obvious point to attck from a bit further out? Must just about every mountain stage end in a steep ramp in the middle of nowhere?........
Reactions: Sandisfan
F

That's an awful route. And to think I was excited when we didn't get any info about the route for weeks.
1.

That might be some kind of record.
Reactions: Cookster15 and Sandisfan

You can lower that average .3 points.
Reactions: Sandisfan
R

ha ha ha ha ha... [insert belly laugh]. This is brilliant, brave & stunning. What a sense of pride & accomplishment. This might be worse design than the Tour. Tour at least has one mountain before its MTFs, here it's a unipuerto galore. I do like some of the stuff though. The first week but the NED stages are harder than expected. Nice to see at least Brenes before Pico Jano. I may like those 2x Talavera laps as this looks like classic, tricky Vuelta 3rd week stage. I am sick and tired of Morcuera but it always delivers. I give the route a big plus for introducing some of the most random places in Vuelta's history. I never expected Pico Jano, Fancuaya or Tentudia.

Almost all of the countless MTFs are a bit useless. Sierra Nevada and maybe Penas Blancas are good enough on their own but the rest is weak sauce. Tentudia is a waste of time in the middle of nowhere. A hilly stage to Aracena would be more interesting on paper. Piornal is horribly designed. Pandera is just a lost cause. Fancuaya is designed to be preceeded by Marabio. The Dutch are (obviously) on Dutch roads which means tons of crashes which could be their only contribution to the race. The first stage should laso be a 10-15k TT rather than TTT.

I was thinking of not going with the crowd and giving it a 3 but decided to go 1 grade higher because of very unorthodox MTF places and maybe that Talavera stage may at least partly deliver? BTW, it's a "on paper" grade as Vuelta is very dependent on day to day racing. You won't see such random attacks like this year Covadonga stage at the Tour.
F

Haven't had a too detailed look yet, but on first sight this looks awful.

I also completely dislike starting a GT in different countries. Going to a neighboring country within one stage or for a stage finish, fine. But starting the Vuelta with three stages in the Netherlands, that's hilarious. I don't even care if it's a well-established thing, if this gives them more financial leeway or if it makes for a better race, I simply hate it.

Gave it a 4. Probably because my expectations were low, and I like Sierra Nevada hrough Las Sabinas, as well as the final mountain stage

Realistically it is a 1. This is pure garbage. I already forgot what I saw in the route. Ok. I remember Pandera and Sierra Nevada. I cannot remember anything else.

Having said that, there is probably a curve when judging GT routes. This is the same curve that usually helps La Vuelta because of its place in the calendar and its Niche. So it could be higher based on that. Other than that this is the worse I have seen in like.... forever. Well I don't remember which route is worse than this one.
Y

Some of you need to go back and review the 1990's Vuelta Routes - Often the first 5 stages were a prologue and four sprints.
Reactions: Red Rick

Right, I've had a bit of a play about with the stage hosts. Some of the order of stages and hosts have been changed, but none of the roles have been changed - ergo the 21 stage starts are used as 21 stage starts, and the 21 stage finishes are used as 21 stage finishes. No 240km megaliths or 60km ITTs that the Vuelta would never go for, just using the actual stage hosts to see what we can come up with that the Vuelta might not unreasonably be able to do.

I've taken the actual profiles from Rouleur's preview of the Vuelta, so check that out for something more realistic than my pie in the sky ideas. 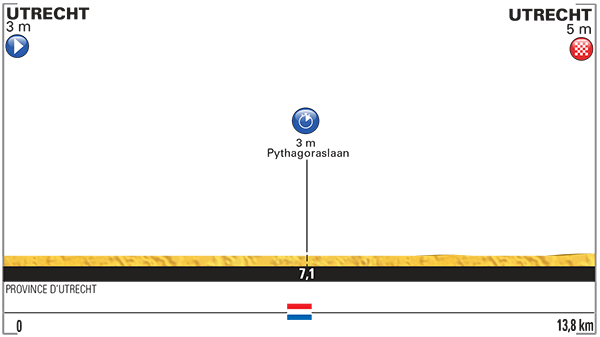 First deviation from the script. No real difference in logistics if they arrive in Spain via Bilbao airport, but easier if arriving via Biarritz, or if they charter fly to San Sebastián, the airport is between Irun and Hondarribia. Last climb is about 4km at 6,5%, about 25km from home, with a gradual uphill - about 3,5km at 4% but in a dead straight line - before flattening out and the repecho to the finish. Should balance durable sprinters and puncheurs.

I actually don't mind the Bilbao finish after El Vivero (fond memories of 2011 too) in the real race, but here I've borrowed a bit from one of my Race Design Thread Vueltas and from one of PRC's ideas; climbing a shoulder of El Vivero at 35km from home, then the normal Galdakao side cresting at 20km from home, descending the Lezama side then climbing the first 3km pf this side which crests at 8km from the line, so a proper Montelupone/Aia type ramp, and then the regular descent into Bilbao to finish.

I have no problem with this stage in its role. It might slow the action on stage 5 but that's why I've gone for the murito. Not a big fan of this stage but not much I can do with it that makes sense - Cistierna could only otherwise go off the back of a long flat on stage 9.

Basically the same run-in as the 2018 stage, taking in Gijón and Oviedo with some smaller climbs first. Being almost 4km at 13%, this should be steep enough to ensure gaps, and so is fine to have on the Saturday with a bigger stage on the Sunday.

This is my idea of an explosive short mountain stage... well, sort of. But the way the stage is and the location of Fancuaya, only Puerto del Marabio can give you a better option than La Corredoria at 27km from home. And this enables you to include the harder side of La Cobertoria and the classic San Lorenzo. There is a short and very steep first part of the descent from La Corredoria which might need some work.

Queen stage time - rather than Unipuerto down the coast we're going to loop around first. Shame to have it on a midweek day, but so be it. Of course the MTF is still going to be the main thing, but we can at least make the riders exhausted enough beforehand with Conjuros and Haza del Lino.

Classic Vuelta stage here - very little real climbing, but almost no true flat. One for the sprinters, but they're going to have to work for it. 2km at 6% 20km from home, shouldn't be enough to stop the sprint.

Throwing in the La Yedra climb that was planned to be added in to the Vuelta a few years ago as a staging post en route to La Pandera, early on. Hoya de Charilla 30km from home, multi-stepped and super steep, then a meta volante in Valdepeñas de Jaén and the traditional La Pandera summit.

Pretty long transfer here, lots of rolling terrain and uncategorised climbs in the first part. A bit more borrowed from PRC ideas in the first half, then doing the double Peñas Blancas loop borrowed from Devil's Elbow's post here. This way the previously used side ends at 51km from home, and the rest is either climb or descent, and there's a rest day following...

Much reduced transfer between stages 15 and 16 this way.

Don't much care for this stage, but like stage 7, not much else I can offer.

Trying to turn this into a breakaway stage, but one where something could happen. But is unlikely to. Consists of this side of Piornal until the junction for Cabrero, then this climb cresting 3,5km of flat and false flat from the finish. It's like an easier version of the 2010 Les Rousses Tour stage and should be one for the break.

Hugely beefed up with the first loop replaced by La Centenera and Pedro Bernardo, and a much longer stage due to the transitional section in the middle. Again likely one for the break but with the punchy Segurilla climb 11-12km from home to offer a final chance for the escapees or see if somebody is tempted.

Final mountain stage and using an old Vuelta trope of having two sides of Navacerrada. Here we put Morcuera early and loop back via Canencia to return to Moralzarzal, then go up Navacerrada south, but instead of a long rolling loop to avoid going back on ourselves like in the 2010 and 2012 Vuelta Bola del Mundo stages, we instead use the forest roads of Fuente de la Reina to break up the two ascents, placing a narrow and steep puncheur challenge between the two sides of the more gradual and classic traditional climb. This puts Navacerrada south 37km from home, Fuente de la Reina 25km from home and then a descent and a little false flat before Navacerrada north to finish. 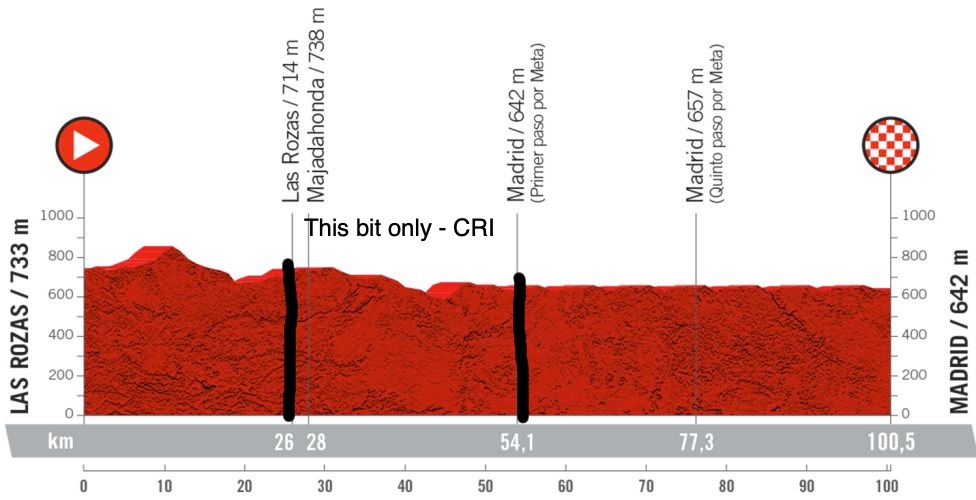 Final day ITT time, using part of the existing parcours. This used to be a staple, but they moved away from it after two consecutive years when the jersey changed hands in Madrid, with Ángel Casero and Aitor González both taking the jersey on the final day. The 2014 and 2021 Santiago de Compostela finales say that this can reasonably be done, so why not bring it back in Madrid once in a while?
Reactions: Forever The Best, Red Rick, SafeBet and 1 other person
You must log in or register to reply here.
Share:
Facebook Twitter Reddit Tumblr WhatsApp Email Link