Couldn't find a thread for the team (apart from in that other place), but they've announced their 2021 TDF lineup with the cover-all-bases combination of Quintana, Bouhanni and Barguil. 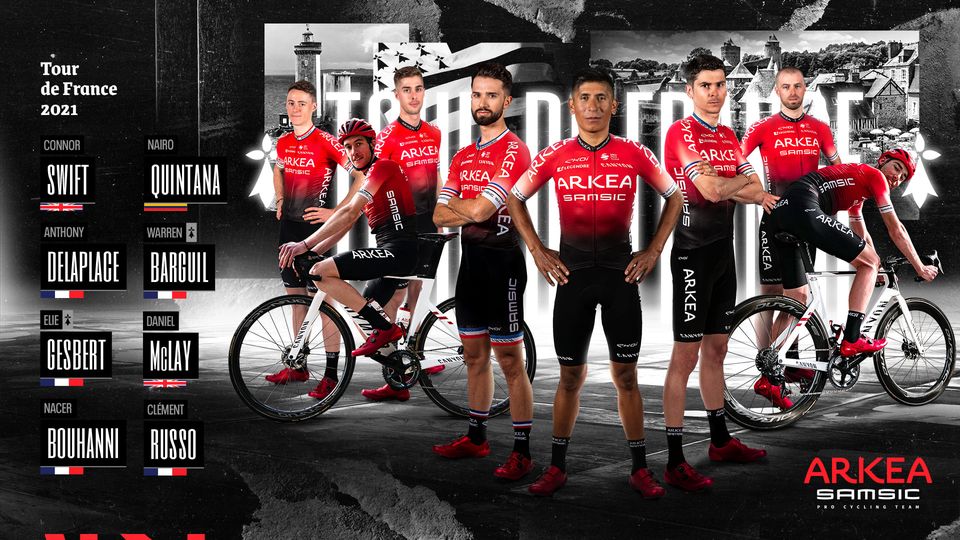 They have named a squad to fight on a number of fronts, with Elie Gesbert able to complement the three leaders in targeting the punchy and medium mountain stages.

The eight-man squad is noticeably less geared around Quintana compared to last year, when the Colombian hit the ground running in his debut season with the team. Quintana has had a subdued 2021 and the three riders who followed him to the team - Winner Anacona, Diego Rosa, and his brother Dayer Quintana - will have to sit out this year's Tour.

Quintana won the recent Vuelta a Asturias but struggled to make any impact at the Critérium du Dauphiné, where he placed 20th and where team director Yvan Ledanois issued a scathing critique of the team's form so close to the Tour.

While Barguil, who placed 14th overall last year - three places above Quintana - could end up doing some work in the mountains, Anthony Delaplace is the only domestique who can provide uphill support.

Unlike last year, the team have found room for a pure sprinter in Bouhanni, plus a dedicated lead-out man in Dan McLay. Bouhanni, who recently made his comeback from a two-month ban for dangerous sprinting, makes his Tour de France return after a three-year absence. He has yet to taste victory this year but a win would complete the set of stages in all three Grand Tours.

"The objective is to prize open as many opportunities as possible in order to grab a stage win, without neglecting other objectives over the course of the race," said team boss Emanuel Hubert.

"The balance of strengths has been thought through so as to be able to be up there on all terrain, with riders who can support our leaders in their specific areas."
Click to expand... 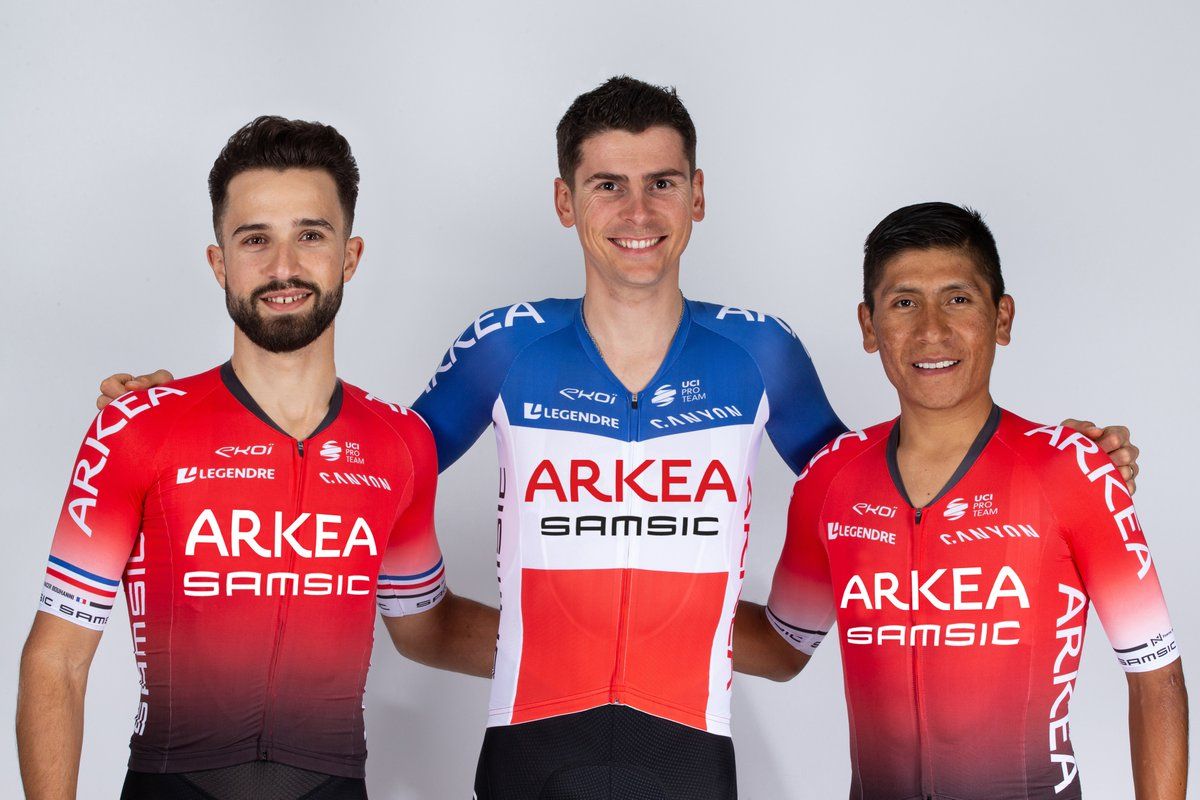 Quintana alone. No friends and family with him. It will be interesting to see how he does.
But at the end Arkea is probably doing the only thing that they can do which is going for stages. Even that it will be very hard.
Reactions: Sandisfan and yaco

Escarabajo said:
Quintana alone. No friends and family with him. It will be interesting to see how he does.
But at the end Arkea is probably doing the only thing that they can do which is going for stages. Even that it will be very hard.
Click to expand...

Anacona crashed in the Dauphine and had a DNF in the Mt. Ventoux challenge afterwards, I guess that's the reason why he wasn't selected. I can't really say that I would have picked Dayer over any of the guys that they are bringing.
Reactions: Lui98, Sandisfan and Escarabajo
B

Escarabajo said:
Quintana alone. No friends and family with him. It will be interesting to see how he does.
But at the end Arkea is probably doing the only thing that they can do which is going for stages. Even that it will be very hard.
Click to expand...

Agreed, but they don’t have a worse chance at stagehunting than most others teams. Barguil can look sharp on his day and Quintana could win an mtf provided hes already well down on GC.

if Bouhanni can ride a straight line surely he’s at Cavendish level, at least?
Reactions: Sandisfan and Escarabajo

Good day today, Nairo lit up the stage and only finished a couple of seconds behind the Slovenians, while Gesbert came in at 0:00:42. Nairo now 5s up on Carapaz and 15s up on "G". Podium still on

And great to see the Gesbert fan club out in force, salute

Some falls, including Barguil, but the whole team finished the stage, Bouhanni got 3rd in the reduced sprint and Nairo stayed out of trouble. 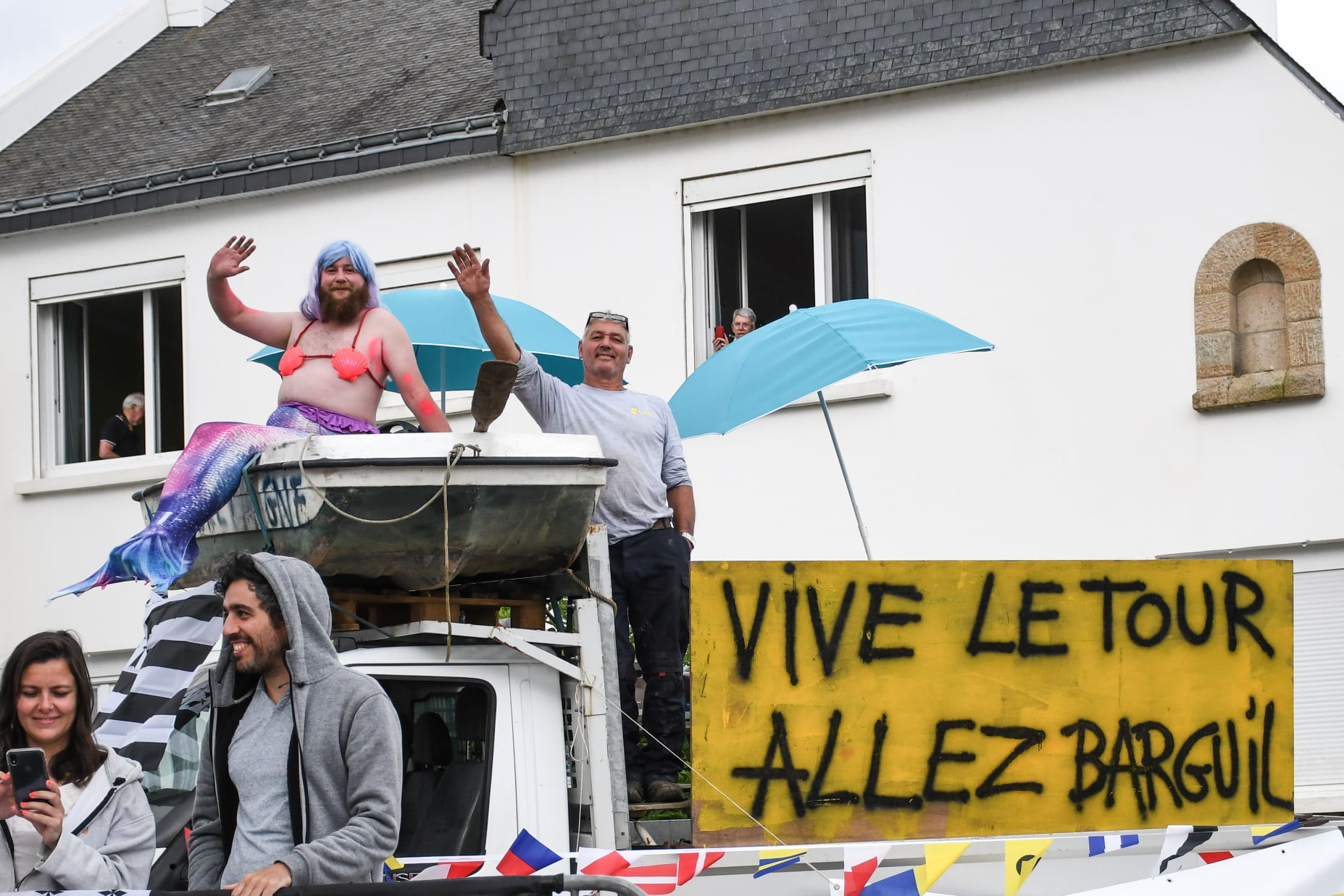 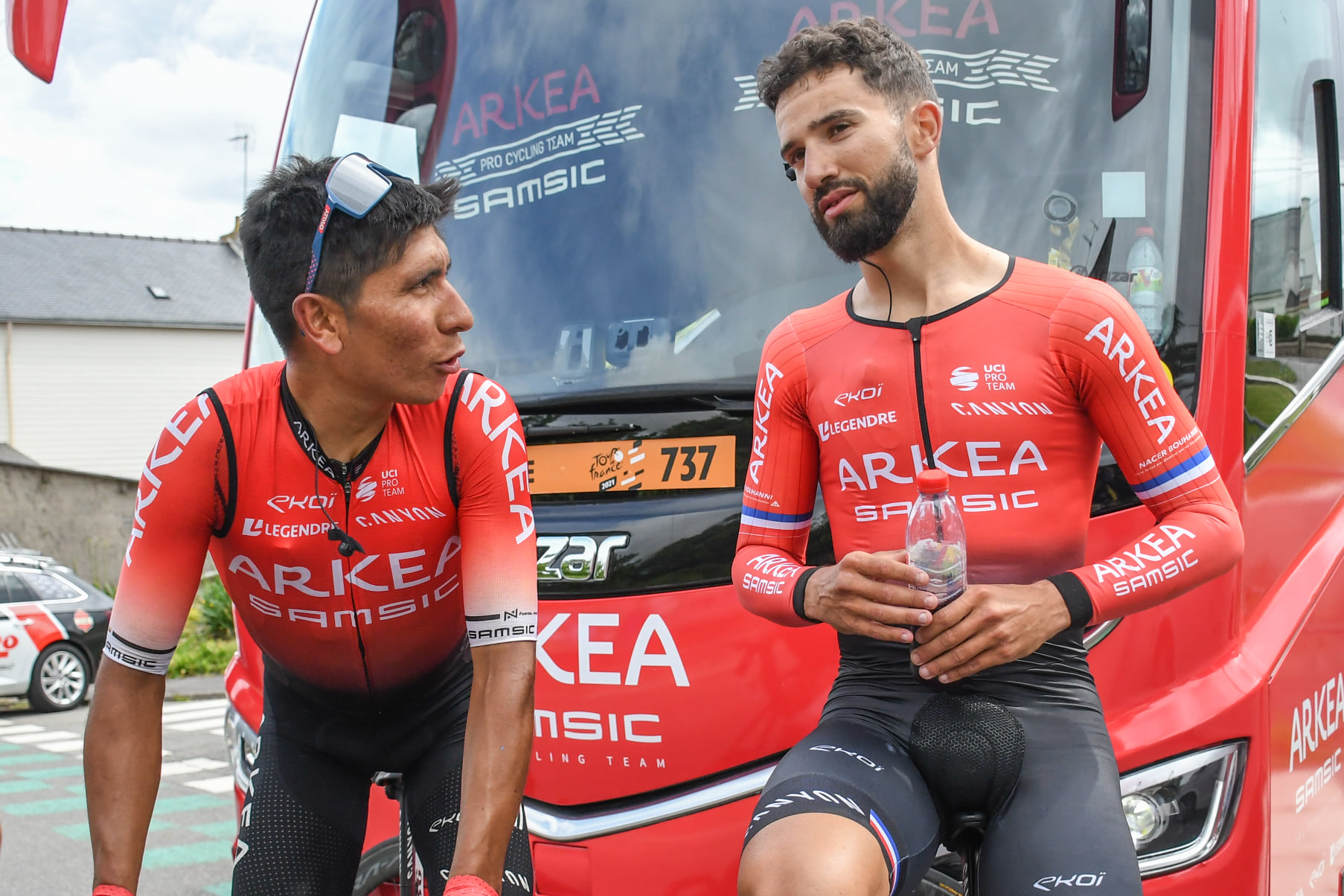 3rd for Bouhanni, to go with his 2nd and 3rd in the previous sprint stages. He's looking in good shape even if not quite matching Cav at the moment.

Nacer Bouhanni: ′′ I'm still missing a little, it's a shame, because I'm back on the final. We were really in the game! ′′
Yvon Ca ër: ′′ Nacer's good condition will pay off. We all believe in it. All the ingredients are here.
Click to expand...

I have to hand it to Bouhanni, I thought he was done a couple of years ago.

tobydawq said:
I have to hand it to Bouhanni, I thought he was done a couple of years ago.
Click to expand...

I always saw him as a sprinter who was better after a hillier stage, a shame for him that there aren't too many of those kind of sprint stages in the Tour this year.
On paper stage 10 and stage 12 aren't hard enough to make a big difference.
That said, maybe fatigue could catch up with some of the other sprinters-
L

What have they done today??? Really, what are they thinking???
They didnt put mens in the break, Nairo loosing time on purpose in a stage that was only rolling in the bunch. Plus Roglic falling apart is an oportunity to go up in GC. They send Warguil with the peloton that is already far behind, and Nairo fall down in GC.
I hope tomorrow Nairo go bananas from km 0 and wins the stage, if not, its a pitty that he lost time today

The only thing I want is for Nairo and Arkea to break that silly contract for the third year that they have. Nairo does not deserve that money and Arkea is simply a small team that cannot provide anything to Nairo nor any GC rider. What were they thinking?
Barguil at least is French and has a good reason to be there.

Bouhanni can win a stage this year. Already this year he's taking his best results in the Tour. 5 chances left.

If Quintana could win a stage even better. Who knows what's going on though. He brought them some nice wins they wouldn't have otherwise but yes not enough for whatever his contract is.

Well, from their statement it seems Nairo didn't lose time on purpose but was on a 'bad day'. Not great.

Nairo wasn't having a great day. Warren is recovering step by step from his two falls. The stage was still fast today, it was a struggle to get the breakaway.
Click to expand...

Seems Nairo is really targeting those polka dots, but I think one of those sprints he mentions was a bit wasted on a summit with no points.

Nairo Quintana: ′′ The stage was very tough from the start. Did the sprints to take a few points in the climber ranking. I was also playing the stage. I keep moving forward day to day. ′′
Click to expand...

Great to see something positive from Nairo who was very active on the stage and now has the KOM jersey, but sad scenes as Anthony Delaplace missed the time cut.

Team down to only three riders after Bouhanni and Barguil were caught in the crash the other day, with both now having abandoned. Seemed like this year was a great chance for Bouhanni to get a TDF stage and he came close a couple of times, but I guess Nairo and his shot at the KOM jersey is all that's left to aim for, he's 10 off Poels after today.

At the end of forces, after multiple falls, Nacer Bouhanni was forced to abandon the 15th stage of the Tour de France.
You gave it all Nacer! Come back to us in great shape
Click to expand...

Thanks for posting updates Barnacle Bill. But this team is really bad. But we know that these French team have issues. So Quintana has nobody to blame but himself. It is s pity.
B

Quintana is riding like he has knee problems again. He's always had less leg extension than most , but lately he's looking really cramped.

After a reasonably positive start to the Tour with Bouhanni coming close on a few sprint stages, then Nairo in the KOM jersey for a while, in the end the team were left with three riders, no stage wins and Nairo falling back in the last week. Pretty disappointing all round and we barely saw Barguil - albeit after crashes hampered his efforts. I'd say someone who left a good impression was Elie Gesbert who was still trying to the end, whether pulling for Nairo on the climbs or getting into the break on Friday.

Another second for Nacer, this is becoming a bit of a habit!

Haven't seen Winner Anacona in a while, he's in for Burgos

Wawa back on the podium... there are even women in yellow...

I know there's been some debate in the Lotto Soudal thread about the UCI point allocation so it was interesting to see this analysis on twitter and related article on CN about how Arkéa-Samsic's strategy of skipping the Giro d'Italia to focus on getting points in smaller races paid off with them earning "more points from May 6 to May 29th than 11 of the WorldTour teams racing the Giro - more than Jumbo-Visma, who won two stages ". Seems the current system is pushing teams to make these smaller races a priority.
https://twitter.com/i/web/status/1531181617212948480
View: https://twitter.com/eltiodeldato/status/1531181617212948480
Reactions: Sandisfan

Barnacle Bill said:
I know there's been some debate in the Lotto Soudal thread about the UCI point allocation so it was interesting to see this analysis on twitter and related article on CN about how Arkéa-Samsic's strategy of skipping the Giro d'Italia to focus on getting points in smaller races paid off with them earning "more points from May 6 to May 29th than 11 of the WorldTour teams racing the Giro - more than Jumbo-Visma, who won two stages ". Seems the current system is pushing teams to make these smaller races a priority.
https://twitter.com/i/web/status/1531181617212948480
View: https://twitter.com/eltiodeldato/status/1531181617212948480
Click to expand...

What would Arkea have gotten if Quintana had podiumed this Giro d'Italia?

Which would've been absolutely possible in hindsight.

DSM really pays the price for losing Bardet. Otherwise his points scored at the Giro d'Italia would have been a big paycheck for them!
Last edited: May 31, 2022
Reactions: Sandisfan
You must log in or register to reply here.
Share:
Facebook Twitter Reddit Tumblr WhatsApp Email Link