Now, they're the reigning Tour champions. I think we're at the point where we have to resign ourselves to the fact that really nothing has changed in this sport.

Kreuziger's issues are also from his time on Astana. Gusev had some "irregular values" in 2008 and was benched for ~2 years. Kessler got banned in 2007. 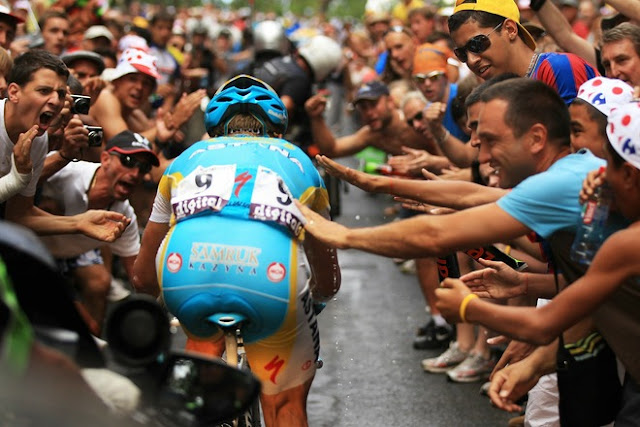 Netserk said:
Gusev had some "irregular values" in 2008 and was benched for ~2 years
Click to expand...

It's just an incredibly shady team on all fronts. Remember when Vino wanted to come back but it turned out the team didn't have any available spots and so he couldn't race as per the UCI rules? Sure enough, some young Kazakh suddenly 'decided' to retire.

fmk_RoI said:
Gusev was fired by the team based on internal testing but then won when he took the team to CAS
Click to expand...

Yes and he ended up not riding for nearly two years. That's why I wrote benched instead of banned.
D

Most pros would be happy to ride on Astana....

This is the team that arose following the take-down of Liberty Seguros (ONCE as was, the team Manolo Saiz built) - dating Astana's "shameful legacy" to their three positives and two firings in 2007 is a bit of a joke, no?

Go back to the start of ONCE and look at one of Saiz's key signings: Nicolas Torredos (recruited from the Spanish federation). Look at what Torredos was able to achieve with Laurent Jalabert. Look at what he was able to do with Alex Zülle. Look at what Johan Bruyneel learned there. Look at the other notable doctor Saiz signed: Fuentes.

Look at the actions of Saiz and his riders during the Festina Tour. Look at Roberto Heras's troubled Vuelta victory in 2005, the race he won, was stripped of and then re-awarded (a first in the history of the sport?).

And then look at Puerto, with Saiz at ground zero when the walls came tumbling down.

Look at the time outs they took in 2006 and 2007 - taking an eight day break today would be tiny compared to the month they pulled themselves off the road in each of those instances.

Look at who was originally brought in to remake as Astana the team that Saiz built, Marc Biver, and the stories he is interconnected with.

you have nice arguments guys but all i see it's an absolutely awesome team with a nike kit that plays by the peloton rules...

2015 should be hardcore with tinkov vs kazakhs vs british empires. enjoy

I think the point of the thread is not once 1989-today, but merely the time when Kazakh money came in to help their "hero"

They sure get caught a lot. Maybe they can hire a doctor from one of the other teams to make sure there are no positives?

When Vino left Telekom he took some staff with him. One of the key guys he took was Dr. Andreas Schmid, Telekom's main needle guy. His name is all over the Frieburg report. After some awkward questions his name disappeared from any team reference but he kept working with some riders.

SeriousSam said:
They sure get caught a lot.
Click to expand...

But do they? Dating back to 2007 there's what, Vino, Kas, Kes, then there's Contador, Kreuziger and the two Iglinskiys. That's averaging one a year. Has anybody bothered to look at what the averages are for other teams?

Scarponi. Worked with Ferrari AND Fuentes.

fmk_RoI said:
But do they? Dating back to 2007 there's what, Vino, Kas, Kes, then there's Contador, Kreuziger and the two Iglinskiys. That's averaging one a year. Has anybody bothered to look at what the averages are for other teams?
Click to expand...

I believe USPS, T-Mobile, Rabo, Festina, Gewiss can beat them for positives.......

So what is shameful about this?
The UCI, ASO, MPCC etc etc seem ok with it.

Perhaps for now, but Festana is catching up.

Interesting, they have such ties to both the former USPS and T-Mobile teams. The turd doesn't fall far from the ***.

Also, you can add to the list of positives Vladislav Gorbunov, who was racing very strongly for Astana Continental in the Volta a Portugal last year before testing positive. I went searching for details of that and found the UCI's sanctions PDF.
B

I think this list has to be the longest list on dopeology for active teams, that's a pretty big achievement.

Astana are the same as the other teams except they don't have the same need to be seen to be clean. This is what a 2014 cycling team looks like when you strip away the spin and the protection.

Eyeballs Out said:
Astana are the same as the other teams except they don't have the same need to be seen to be clean.
Click to expand...