Page 49 - Get up to date with the latest news, scores & standings from the Cycling News Community.
Sidebar Sidebar
Previous Next

I know that Norsgaard took the start but had to retire shortly after, becuase the pain in her ribs made it impossible to continue. Cille crashed, but continued, at least for a bit, before she also withdrew. Because they rode multiple laps today, it was also easier for riders not to finish the stage, especially if neither themselves nor their teams had much to ride for anyway.
Reactions: sir fly

I missed that one of the Ceratizit riders had tested positive for Covid before the stage.
D

I would like a couple of months now with Norsgaard and Ludwig not crashing, please and thank you

Samu Cuenca said:
I know that Norsgaard took the start but had to retire shortly after, becuase the pain in her ribs made it impossible to continue. Cille crashed, but continued, at least for a bit, before she also withdrew. Because they rode multiple laps today, it was also easier for riders not to finish the stage, especially if neither themselves nor their teams had much to ride for anyway.
Click to expand...

I don't like to be critical of riders but that was junior level bike handling from Wiebes in yesterday's stage - It had the impact of ruining a stage, affecting the GC and causing injuries to riders.

Will you stop completely contradicting what I just said?

RedheadDane said:
Will you stop completely contradicting what I just said?
Click to expand...

I assumed you were typing that while they were on some cobbles or dirt roads.

The weather is adequate.

Campbell has been caught by the péloton too. Janneke Ensing is being Janneke Ensing, which is great to see seeing as we won't have the chance to see it for much longer, attacking, crossing the gap, and then immediately attacking the break to go solo because that's what she does. This was the kind of move that got her all her best results and visibility in her Parkhotel and Alé-Cipollini days, before the disastrous Sunweb experiment.

Korevaar crosses the gap and joins Janneke at the front. The péloton swallows up part of the remainder of the breakaway, and a few riders trying to fight across the gap now joining the escapee, led by Parkhotel, and it looks like the two groups will rejoin one another. Trixi Worrack is done up front. New group is Janneke Ensing, Jeanne Korevaar, Mischa Bredewold, Eugénie Duval, Ella Harris, Teuntje Beekhuis and Silke Smulders. They have around 30 seconds. Valcar-Travel & Service chasing for a sprint, but not getting too much support for their efforts from other teams. Duval attacking to split the group, and Ella Harris unable to hold the wheel. This hurts Ensing because she was on the back of the group and the only one behind Harris when she was caught out, and so the former speed-skater is having to really push it to get back to the front and is in a bit of a no-woman's-land behind the front 5, her shortcomings in bike handling in the wet are hurting her in this run-in as well as she struggles to hold the wheels on wet corners and is braking and bolt upright like Ivan Basso. Beekhuis is riding all over the white lines in the road, which is playing with fire in this weather.

On the uphill, however, Ensing comfortably finds her way back on to the group, where her surfeit of raw power is prized over the deficit in confident bike-handling. Harris looks like she's about to be swallowed up by the bunch. Unfortunately for her, the technical bit where she struggled is close to the finish, so she'd want to go earlier, but she's just had to launch a serious effort in order to catch back on.

Bredewold attacks and Duval goes over her, the two plus Smulders now on the front. Beekhuis and Korevaar trying to come across but the bunch looks like it's going to catch them, they have been using stragglers from the break as targets and picking them up. With Harris and Worrack caught, Canyon-SRAM and Trek have now been helping the chase, it looks like the bunch is going to win. Well, what remains of it, there's only about 30 riders there... and at 3km from home, Lisa Klein pulls back the escapees. Sprint incoming... looks like the likes of Barnes, Pieters and Dideriksen are the target. Dideriksen launches, but she goes too early, and who would be there to profit, coming out of the wheel at the last to take the win, but Eddy Merckx?
Last edited: Aug 29, 2021

Vos defintiely still has the killer instinct. We still don't know if she'll be riding next year, but it's hard to imagine she wants to miss the Tour de France. It would also be a huge blow for JV if they couldn't keep hold of her.

Kaptain Kool said:
I just noticed that Movistar isn't riding GP Plouay/Lorient Agglomeration.. I guess it's due to the Simac Ladies Tour ending the day before and Vuelta Challenge on the 2nd. Still strange that a WWT race wont have all 8 World Teams.
Click to expand...

BikeExchange are apparently not riding it either. Two years agot here were 23 competiting teams, this year the number is only 15.

Trek vs. SD Worx for the win.

Lippert, Longo Borghini, Magnaldi and Guderzo with a small gap with 10 km left of the race.

But now ELB goes solo!
A

Peloton got back within a few seconds of Borghini & sat up again. Crazy. Only Mackaij tried to bridge,

Getting riders to fully cooperate is often difficult in the women's peloton.
Mackaij can't close the gap and will probably be overtaken from behind.
Reactions: Andy262
A

You've got to hand it to Borghini. She's always ready to race.

It really feels that there is a lack of ambition or willingness to take risk within much of the peloton though.
Reactions: Samu Cuenca

Gladys Verhulst getting her first WWT podium is a pretty great result for both her and Arkéa.
Reactions: Andy262

Shame for Lippert, Garcia, Guderzo, Cavali and the rest of the ladies that gave Longo Borghini a run for her money.
Great couple of attacks and the winning one was perfectly timed.
Last edited: Aug 30, 2021
Reactions: Samu Cuenca

Samu Cuenca said:
BikeExchange are apparently not riding it either. Two years agot here were 23 competiting teams, this year the number is only 15.
Click to expand...

Now both Movistar and BikeExchange are on the startlist. And it's up to 24 teams.

RedheadDane said:
Now both Movistar and BikeExchange are on the startlist. And it's up to 24 teams.
Click to expand...

Which startlist are you looking at? There were 24 teams in the men's race.

Samu Cuenca said:
Which startlist are you looking at? There were 24 teams in the men's race.
Click to expand...

... I thought you were talking about Ceratizit Challenge. I'm already on to the next race, no time to spare!
Reactions: Samu Cuenca

RedheadDane said:
... I thought you were talking about Ceratizit Challenge. I'm already on to the next race, no time to spare!
Click to expand...

It's because both races has Ceratizit in their names. Sometimes I also get the Tour de France confused with the Tour of Utah
Reactions: RedheadDane
Y

Ploauy needed to be a week or two earlier to obtain a better field - It's tough for women's team to ride a double program.

Arlenis Sierra tooker 5th win of the season on the first stage of the Tour Cycliste Féminin International de l'Ardèche.
Anna Kiesenhofer is not defending her 3rd place from last year, because shes riding the Euros, but both the winner Lauren Stephens and the runner-up Mavi García are there amongst others. 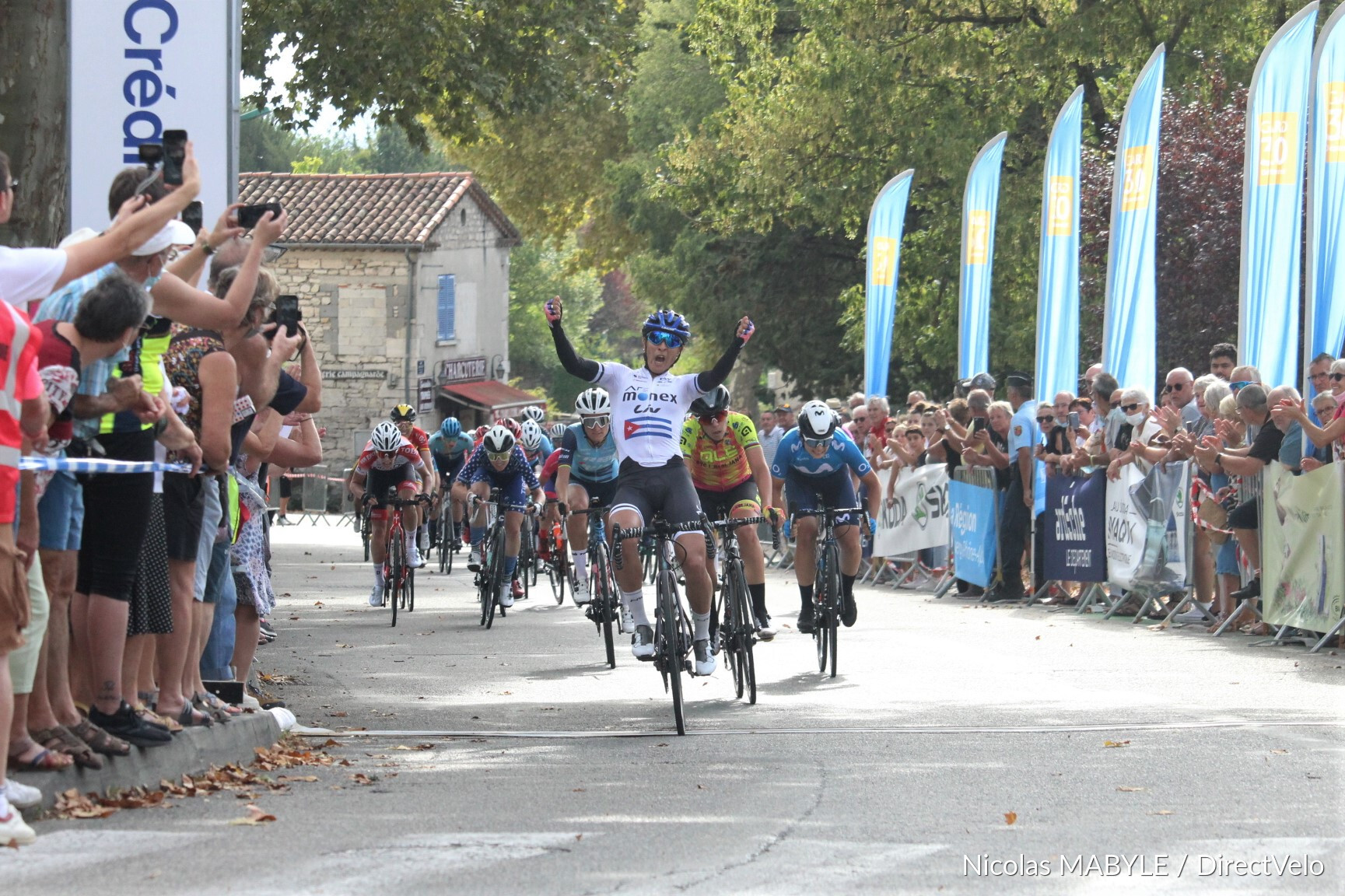