Page 75 - Get up to date with the latest news, scores & standings from the Cycling News Community.
Sidebar Sidebar
Previous Next
Y

The 700 metre climb at 7% should not have caused such carnage, but when it part of a 4.6km lap, then riders had less time to recover - If this was held on a 8km lap it would have resulted in less carnage - It did not help that the GC teams used questionable tactics - I'll also add that I don't see the need for an ITT in a four stage race, especially one that is 25kms long - Then again the course was set up for Reusser.
Reactions: Samu Cuenca

yaco said:
The 700 metre climb at 7% should not have caused such carnage, but when it part of a 4.6km lap, then riders had less time to recover - If this was held on a 8km lap it would have resulted in less carnage - It did not help that the GC teams used questionable tactics - I'll also add that I don't see the need for an ITT in a four stage race, especially one that is 25kms long - Then again the course was set up for Reusser.
Click to expand...

Though Reusser can climb quite well, too, so for her to have won the race it wouldn't necessarily have required such a long ITT either. But at least it's better than having a road race on the ITT circuit as they did last year IMO. And when none of the big races have a long ITT, then other races have to include them instead.

It will be hard anyone to beat Brand now, if she delivers tomorrow, butt here might still be a chance.

As predicted, my decision to pick Brennauer for the ITT turned out to be horrible as she lost too much time in the hillier second half. Brodie Chapman was flying through that part of the course and leads at the moment. Neff only lost 2 seconds to Brennauer in the first half and might be able to match/better Chapman's final time.

Ivanchenko crashed in the last bend and had to run to the line.

Swiss Timing not quite so Swiss today...

Or they got Champman and Roy mixed up.

RedheadDane said:
Swiss Timing not quite so Swiss today...

Or they got Champman and Roy mixed up.
Click to expand...

They didn't, but I don't know how they got Champman's time wrong and needed af ew tries to get it right (if it is right now), but didn't ask her to leave the hot chair until later.
Olivia Baril still has the fastest intermediate time, but there's no way that one is accurate either, unless she went out crazily fast and died at the end.

That looks a pretty solid time from Neff considering she seldom does this kind of thing.

Edit: I know she's from right on the German-Swiss border, but they're putting a lot of attention onto Lippert when Faulkner has passed her AND Klein.
Last edited: Jun 19, 2022

I think they need Rolf Sørensen's stopwatch in order to get the times right.
Reactions: glassmoon and RedheadDane

I like how Marty is trying to tiptoe around the fact that there are hardly any TT results to call on Rooijakkers and Koppenburg, because of a paucity of them on the women's calendar, outside of championship type events where, obviously, the Dutch and German teams have no need to worry about including either of them. Koppenburg's results in the past have been alright, mind.

Faulkner with a very impressive time. We haven't really seen her on a long and flatter time trial before, but she's obviously also still improving in pretty much every department. The Giant/Liv TT bikes are not bad companions either.

Yes, she is looking good and is about to catch Balsamo soon. Koppenburg has lost 45 seconds to her in the first part.
Brand is 16 seconds up on Rooijakkers, but is 8 seconds behind Faulkner at the intermediate point.

Yea, Koppenburg's TT has been a disaster in the first half, she needs a negative split or she has it all to do in the mountain stages. Rooijakkers looks impressive considering the paucity of race practice in the format.

Brand looked to be going at double speed when she flew past Koppenburg.

Brand lost quite a lot of time in the end, and Faulkner will be in the yellow jersey tomorrow (if the times are right).
Last edited: Jun 19, 2022

BEXtremely good morning for the team

BEX's has dialled in their equipment for the ITT on both the men's and women's team - I doubt that Faulkner can hold onto the GC lead as she will probably struggle in stage four, and BEX doesn't have a strong enough squad. Anyway, Faulkner is an interesting prospect as this is only her second as a full-time pro - I'm expecting more improvement in the next two years.
Last edited: Jun 19, 2022
Reactions: claude cat and StryderHells

Balsamo wins the stage ahead of Muzic and Lippert.
Lippert crashed with less than five Ks to go, and had to chase back.

Seems like she specifically rides for them for MTB purposes.
A

She was on their road team a few years ago, doing a few races. I did think that in this race last year, while she was part of the Swiss team, she was riding for Trek unofficially in the break with Deignan. Her bike is even a Trek-Segafredo bike....

Well, I rather overestimated that finishing climb!

I'm also annoyed because I picked Koppenburg over Rooijakkers solely on comparison of their TT metrics since I thought both were likely to be among the top 3 contenders in the climbs (and stage 1 appeared to demonstrate to that effect), but neither had done a representative TT in about 3 years. Pauliena pulled out a very good one comparatively speaking, and so I'm in the position that from a support perspective I probably want Rooijakkers to win the race, but from a Prediction Game perspective I really could do with her not doing that

Axel Hangleck said:
She was on their road team a few years ago, doing a few races. I did think that in this race last year, while she was part of the Swiss team, she was riding for Trek unofficially in the break with Deignan. Her bike is even a Trek-Segafredo bike....
Click to expand...

Well she is still being sponsored by Trek. Frei is also using Specialized bikes in the race, and I assume Indergand has been handed some by Liv/Giant as well. We'll see tomorrow if Brand and Faulkner suddenly have extra teammates.
Y

Samu Cuenca said:
Well she is still being sponsored by Trek. Frei is also using Specialized bikes in the race, and I assume Indergand has been handed some by Liv/Giant as well. We'll see tomorrow if Brand and Faulkner suddenly have extra teammates.
Click to expand...

Faulkner will probably only have Williams and Zigart - Faulkner should top five and possibly Williams can hold on for a top 10. 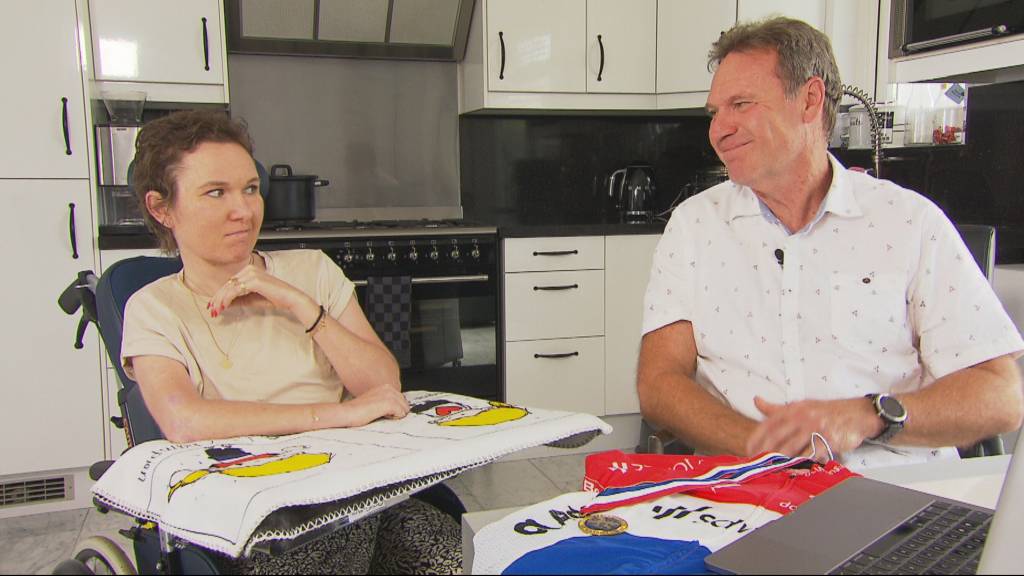 
She sits next to him at the table again. She nods at him, smiles occasionally in agreement. Sometimes there is a glimpse of the old Amy. It is actually the best Father's Day present that Peter Pieters could wish for.

But on the other hand: his daughter, who will not be able to defend her national road cycling title next Saturday, is not the same old one. "It's a very long road."

As she joins us last Sunday at the kitchen table in her parents' house, sitting in a wheelchair, Amy Pieters is far from the Amy she was before December 23, the day a heavy crash sent her into a coma of almost three months.

It is still the question to what extent she will be able to return to her old self after the brain damage she sustained. When father Peter touches her arm, she looks up and smiles at him. She cannot talk yet.

No longer hiding
But no matter how much patience the progress requires, the family no longer wants to hide her from the outside world. Certainly not now that the Dutch Championship is coming up, the championship where she finally took the title in 2021 after so many podium places. "People are curious to see how she is doing."

And how is she doing? "There is some progress. She is rehabilitating in Dordrecht, but in the weekends she is home now. They bring her on Friday and we bring her back on Sunday evening. That is very nice now. And it's good for her too, you can tell. "

It's a big improvement on mid-March, when she just woke up. "She woke up at a very low level. There was very little reaction from her. Very slowly that has improved over the last few months."

She is still partially paralysed. "Her right arm and right leg are not yet functional. She needs help with everything. But we remain hopeful. The doctors are also seeing progress.

Communication is increasingly possible. "She understands more and more when you ask her something. She nods yes or no. You also notice more and more that she has her own will again. That she sometimes says no. Do you want to eat? No. But despite everything, she's quite optimistic, quite cheerful in her dealings."

Connections
The frustrating thing for the family remains: the doctors cannot say a single word about the future. "There's nothing we can do about brains, they say. It has to happen on its own. The connections have to be made again on their own and that takes time. They tell us that if ten patients come in with exactly the same injury, they can also leave in ten different ways."

"We hope she can go to Woerden soon, there is a rehabilitation centre (Daan Theeuwes Centre, ed.) for younger people. That's where things can go really fast, there is attention for four hours a day, also to learn everything at the same time. Walking, talking."

Meanwhile, the thoughts of the family still prefer to avoid the crash and how exactly it came about, even though there remain question marks about it. And not everything has been said about the liability issue either, but her relatives would rather concentrate on her recovery than worry about that now.

"That cyclist Stig Broeckx? He had a very different brain injury, but he is still making progress after six years. I'd be pleased if Amy could get that far."
Reactions: Samu Cuenca, Dk one and Jumbo Visma Fan :)
You must log in or register to reply here.
Share:
Facebook Twitter Reddit Tumblr WhatsApp Email Link