Page 54 - Get up to date with the latest news, scores & standings from the Cycling News Community.
Sidebar Sidebar
Previous Next
D

Incredible performance by Roglic. Congrats.
Now, lets see how he performs when hitting the classics.
C

What an attack by Pogačar on stage 20. This was the only attack Roglič didn't respond to. I am sure that both riders are genuinely happy to share GC podium position. López tried and initiated some good attacks, but his legs just didn't want to cooperate anymore. Valverde in the end had to do some work, to defend second place in the overall classification. As for the Quintana, he likely just didn't desire podium position to such extent, as Pogačar did today, that made the difference. TJV did put a lot of heart in helping Roglič to win La Vuelta 2019. At each stage they basically went all in and gave all they had. Roglič took it from there on and did the rest. In addition stage 20 revealed that all main competitors and their teams gave all they had. Roglič won fair and square. There is still one stage to go, but hopefully final GC results won't change tomorrow.
Reactions: Sandisfan and Koronin
C

Congrats to Roglics on a very nice and deserved Vuelta win.
Reactions: Sandisfan and Carols
C

Champions are coming to Madrid.

Mayomaniac said:
He could be the one to break the Bianchi curse, first gt winner on one of their bikes since Pantani.
Click to expand...

I was wondering which other teams have used their bikes between? I can remember:

Finn84 said:
I was wondering which other teams have used their bikes between? I can remember:

Well, the Bianchi team which Ullrich rode for in the 2003 Tour.

tobydawq said:
Well, the Bianchi team which Ullrich rode for in the 2003 Tour.
Click to expand...

Yes, Ulle is probably the most obvious answer.
First gt win for Bianchi since Pantani and exactly on the 100th birthday of Fausto Coppi, a great day for them, Roglic and JV.
Reactions: Sandisfan 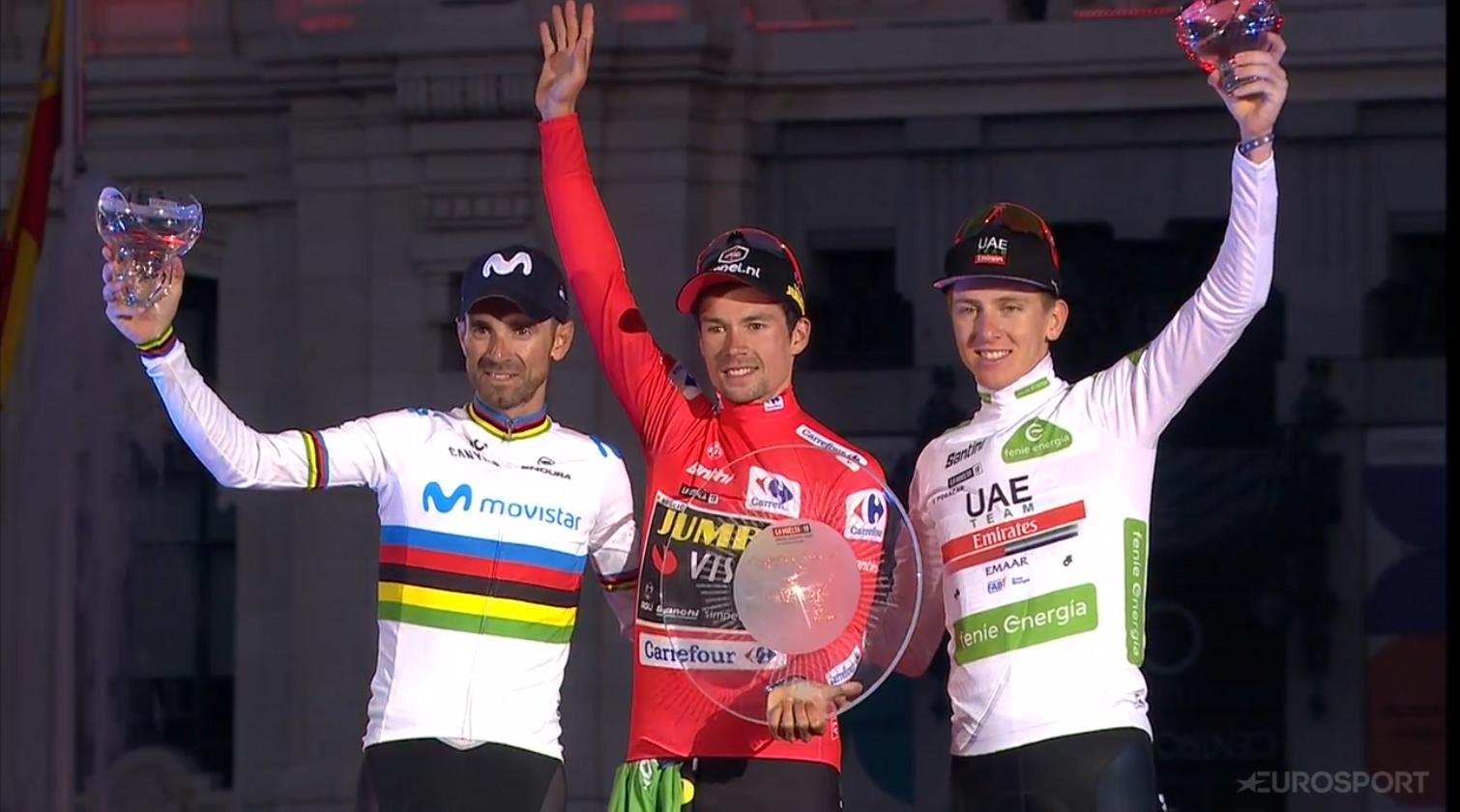 https://www.procyclingstats.com/rankings/me/world-ranking/individual
Reactions: Koronin and Sandisfan
B

OK, so where does Roglic go from here? What's really interesting about him is that his upward progression is really linear. You can't yet point to a year, or even really a race, where he went backward.
He didn't have a huge amount of difficulty winning the Vuelta, against the weakest field in all 3 GTs this year. However, he fought through adversity, including two major crashes that cost him probably the two best JV teammates (Martin and Kruijswijk), survived a crosswinds split and even Movistar's dastardly (i kid, just a little) tactics. He showed no weakness in the mountains and dominated his rivals in the ITT. If not for a semi-disaster in the TTT he'd have won by 4 minutes, if not more, b/c he'd have had SK in the mountains.

IMO, he has to be focused on the Tour next year and skip the Giro, although I'm still not convinced that Dumoulin in top shape isn't a better GT contender. However, we have no idea if Tom will be 100 percent next year, and JV's stated goal is to win the Tour de France, so they should be designated co-leaders and the plan from the beginning of the year should be to have them peak in July. Let Kruijswijk lead the team in the Giro and give him Bennett and Kuss, save De Plus and Martin for the tour. JV will need all the firepower they have against Ineos.

It may very well be that Dumoulin is stronger, and in that case Roglic should work for him, sacrifice his GC place and then go to the Vuelta. That's a lot to ask, but Roglic has apparently agreed to stay with JV till 2023, so he may just have to bite the bullet next July.
Reactions: Sandisfan

I honestly don't see any better plan than Roglic/Dumoulin co leading the Tour and going to the Vuelta with Kruijswijk/Groenewegen going to the Giro and Vuelta.

I might send Kruijswijk to the Tour if I thought he would be one of the best climbing domestiques the team has, but I don't think he would be so in the Tour after the Giro.

Keep in mind that the Vuelta starts in the Netherlands next year. That could well steer the Dutchies to that race a little more.
Reactions: Sandisfan

Super consistent through 3 weeks, best TTer, kept his cool even in difficult situations. Truly a dominant performance by Roglic in this Vuelta.
Reactions: Sandisfan

Amazing year. Winning the Vuelta is really the perfect way to top the results this season. He has completed the goal he had for 2019 - to win a Grand Tour. So that just leaves the Tour de France on the "bucket list".

But the season is not over just yet. His next focus is the World's ITT. In 2017 he got silver, behind dominant Tom Dumoulin. Last year he skipped it due to the elbow surgery after the Tour that prevented him from being in top TT form. This year he said he made it one of the goals in the winter already. On one hand, the competetion is not complete (Campenaerts, Dennis and Evenepoel should be the main rivals - and Thomas if he decides to ride), on the other hand he just did the Vuelta, so he won't be very fresh. But he finished it in much better condition than the Giro, so he might be better prepared in 10 days time. He will ride the road race in support of Mohorič.

After that, the Italian classics with the main goal being Il Lombardia. Now he was in the mix last year, but his late season form (after the Tour) wasn't really stellar, so he faded on the last climb. This year with the Vuelta, things might be different. We shall see. In any case, 5 stage races this year, 5 podiums, 4 wins. Everything else that he does is a plus and a bonus.
Reactions: Carols and Sandisfan

Honestly I find his Lombardia form from last year hard to rate cause he did go crazy on the Sormano and you gonna hve a set of legs under your chassis to do that.

Red Rick said:
Honestly I find his Lombardia form from last year hard to rate cause he did go crazy on the Sormano and you gonna hve a set of legs under your chassis to do that.
Click to expand...

True. But both in Tour of Britain (hilltop stage) and in worlds he "hit the wall" on the last climb. Roglič in Pais Vasco 2018 shape would be there with Woods, Valverde and Bardet in the end. Well, the lenght was the issue there too. As he cramped badly when they hit the bottom of the climb.

bajbar said:
True. But both in Tour of Britain (hilltop stage) and in worlds he "hit the wall" on the last climb. Roglič in Pais Vasco 2018 shape would be there with Woods, Valverde and Bardet in the end. Well, the lenght was the issue there too. As he cramped badly when they hit the bottom of the climb.
Click to expand...

The issue was also the crash in WCRR.

Honestly I think both Dumoulin and Roglic have unexplored potential in one day races.
Reactions: Sandisfan
C

It's official now. Primož Roglič and his team have secured their first grand tour victory. Amazing achievement and congratulations. Due to Tadej Pogačar finishing on podium, today Madrid was in a way a (cycling) capitol of Slovenia. Primož Roglič has such an amazing story, that took him here, and Tadej Pogačar is such a talent, both for sure have a growing global fan base. Rightfully so.

As for the future. Health, preparation, motivation, some politics, team support ... all this factors will likely be taken into consideration, when deciding. In general TDF 2020 was the plan all along. If you put the likes of Roglič, Dumoulin and Kruijswijk together, they would likely be able to challenge teams, such as team INEOS on TDF. But i don't know on how realistic such scenario is, for that to happen. Roglič likely will participate on TDF or Giro. Regardless, he needs a strong enough team, to compete and to try to secure the second grand tour victory.

I have yet to congratulate Primož for this amazing victory. Now it's only one step left, Le Tour de France. He'll get there

With this result he is a strong candidate for Vélo d'Or. It's between him and Alaphilippe right now. Of course a lot of races left, but mainly Worlds and Lombardia will decide the winner of the award.
Reactions: Sandisfan

He has a real chance to win the points title this year. With who is going to the Worlds ITT even with just winning the Vuelta he could podium if not win it.
Last edited: Sep 16, 2019
D

The most complete GT winner in the current peloton IMO. Maybe he can invite Nibali to look at his trophy cabinet now...
Reactions: Sandisfan, starlord and SafeBet
M

This is the first time since 2011 that every GT has been won by a rider who had not won a GT previously.
Reactions: Sandisfan and SafeBet
Y

A great day for Primoz Roglic, congratulations. Add to that the show that Tadej Pogacar has put on for us to marvel at and its been a great 3 weeks for Slovenia.