Ahead of the race, the question was whether this would be the day after or the day in between. After today, it is clear that it won’t be the latter, but there are some reports indicating a chance of crosswind action…


Route description
Comfortably the flattest stage between Denmark and Paris, although you can never rule out a successful breakaway this late in the race and there are definitely exposed sections along the way. It starts from Castelnau-Magnoac, one of the smallest towns to ever host the Tour at 800 inhabitants, and the first debuting stage host since Denmark. The roads out of the town are flat for a long time, and feature the intermediate sprint in Auch. 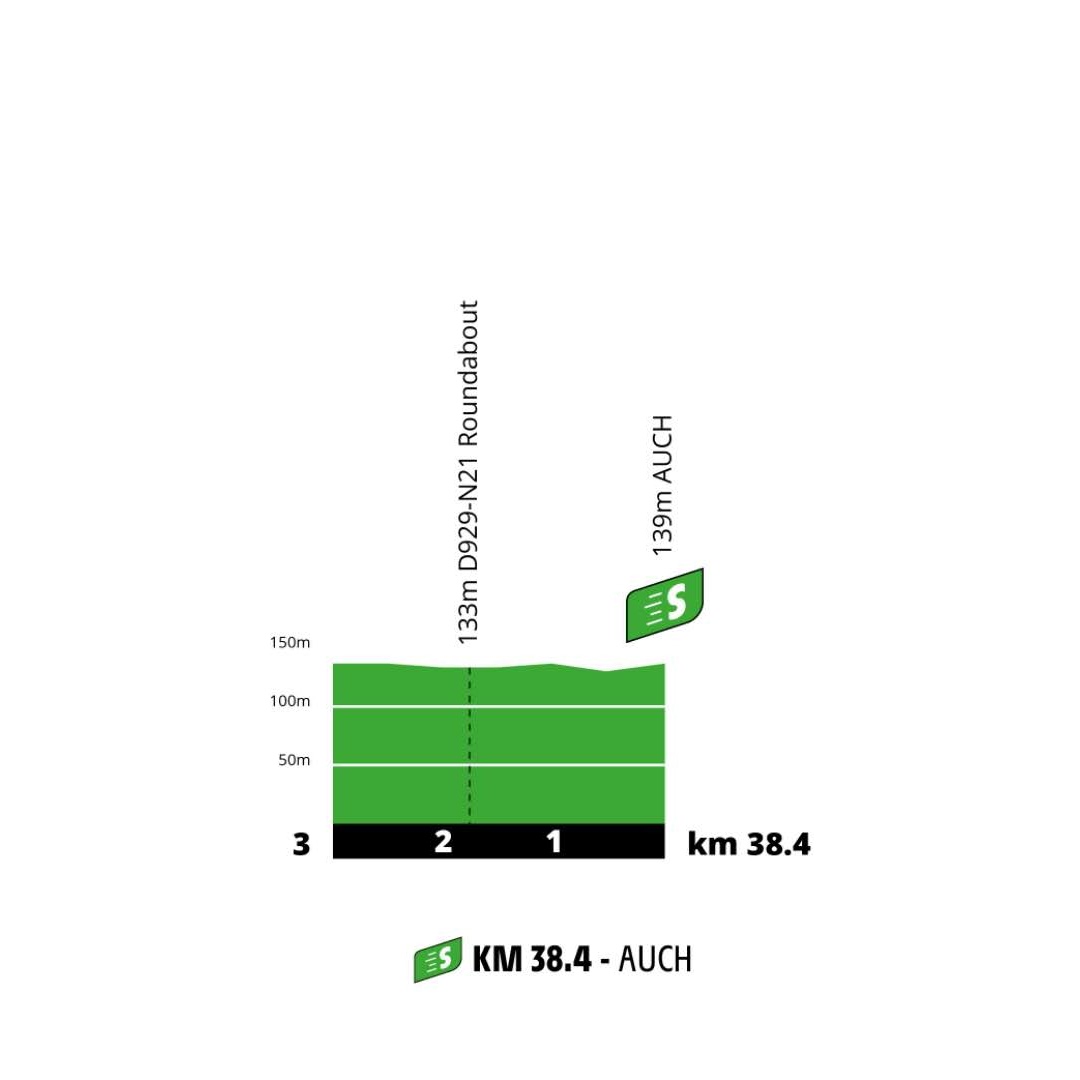 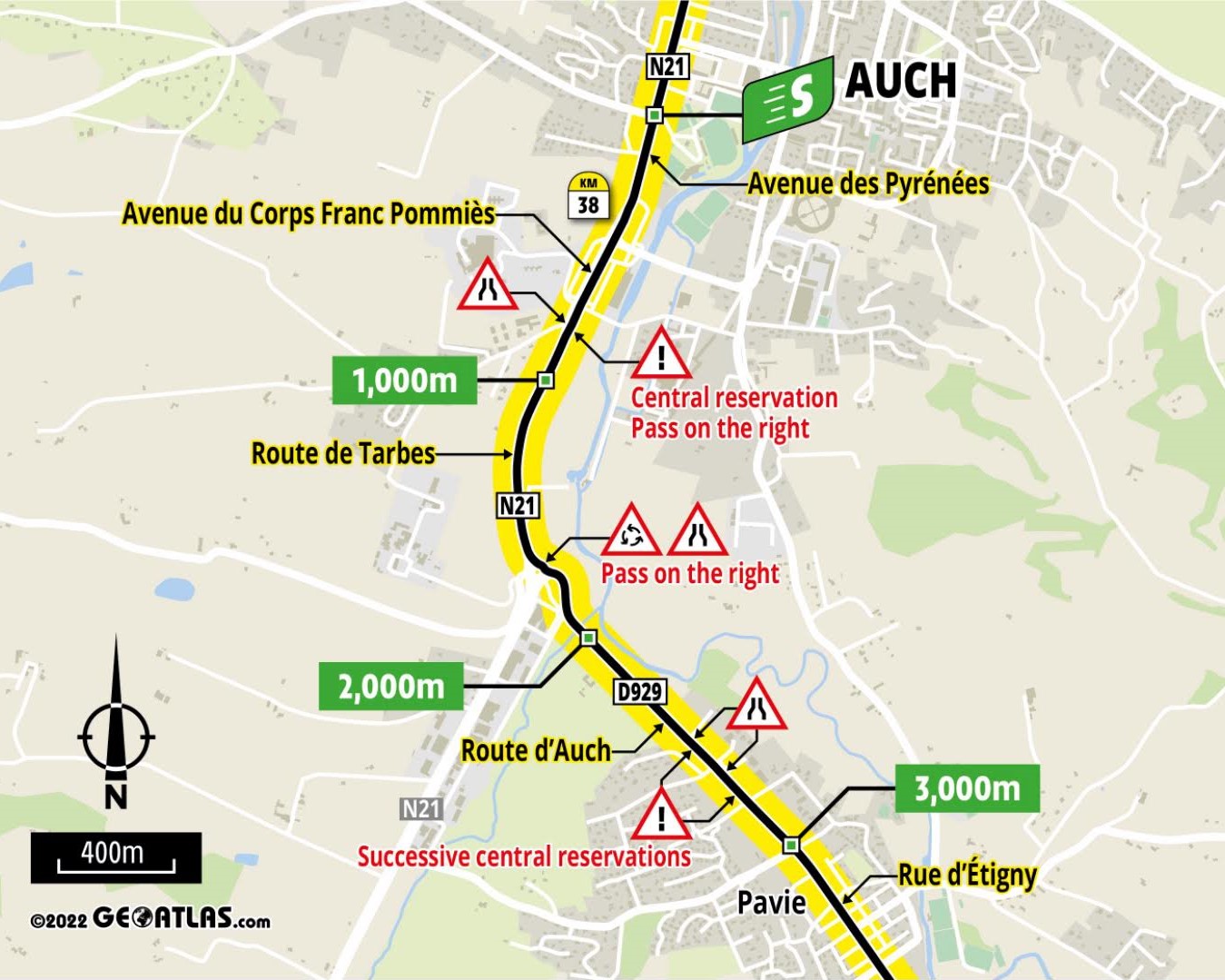 The roads become more rolling as we head for the Garonne, which is crossed at just over 100 kilometres into the stage, but none of these hills were worth being categorised. After another flat section, the race heads into the Quercy for the somewhat hilly final 50 kilometres, starting with the Côte de la cité mediévale de Lauzerte.

This is followed by the Côte de Saint-Daunès.

From here, the route heads for the Lot valley, which is followed upstream into Cahors, which hosts the finish. 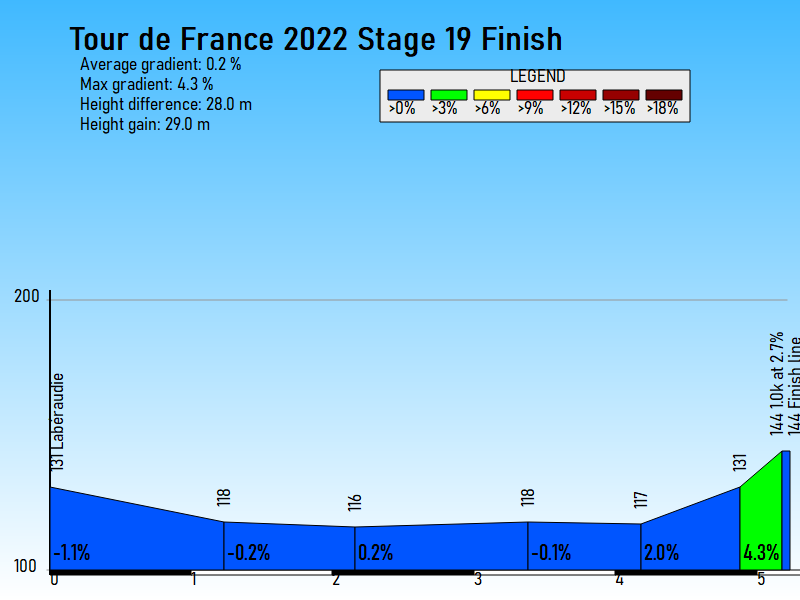 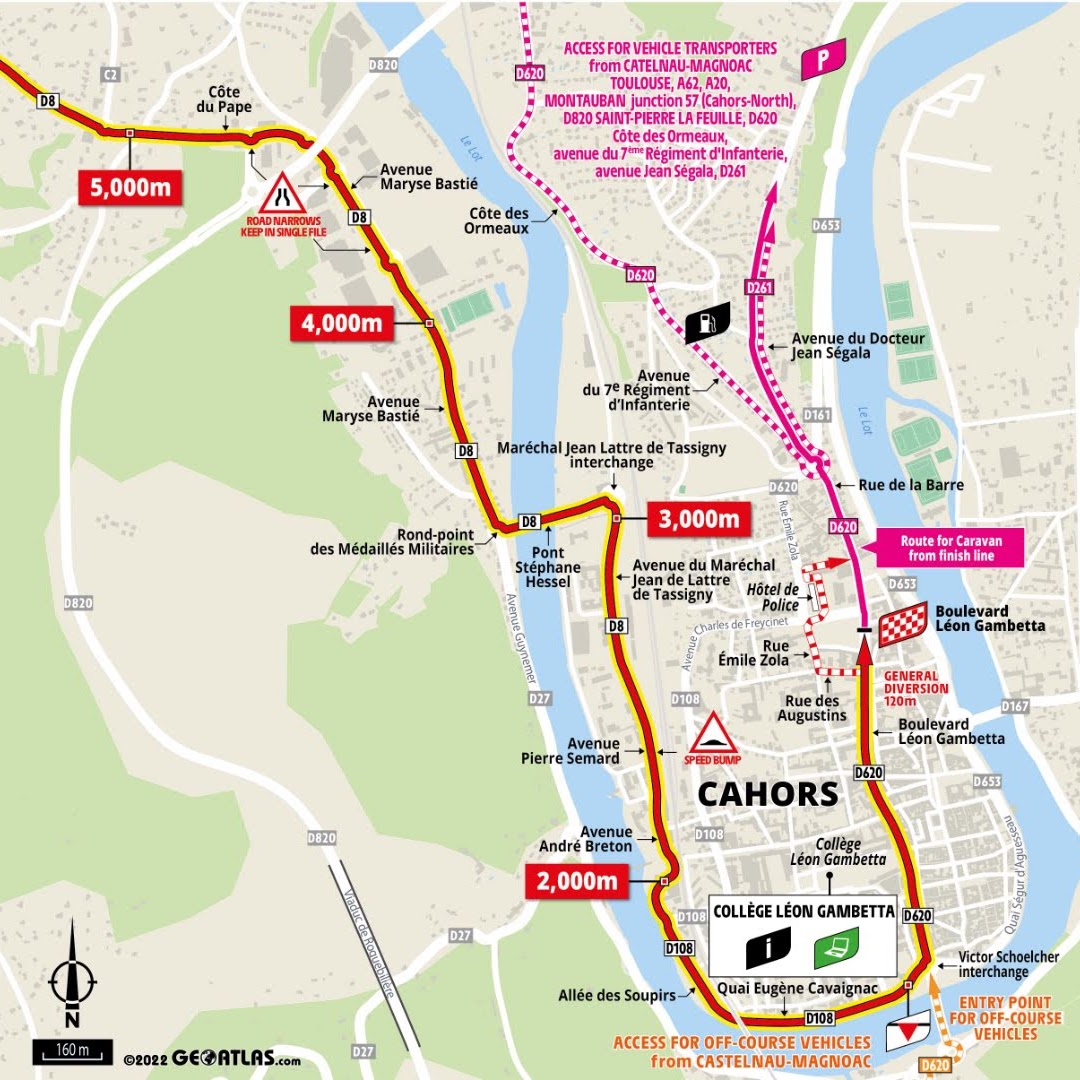 Finale that feels like it belongs in the Route d’Occitanie rather than the Tour – lots of roundabouts and the roads aren’t the widest, to say the least. The trouble starts at this roundabout 5.2 kilometres from the line, only the right side is open for this and the next four roundabouts. As you can see, the road is divided by a concrete barrier in the middle. I think this will be removed for the race, but even if it isn’t, the road will go to a single lane at the second roundabout anyway. 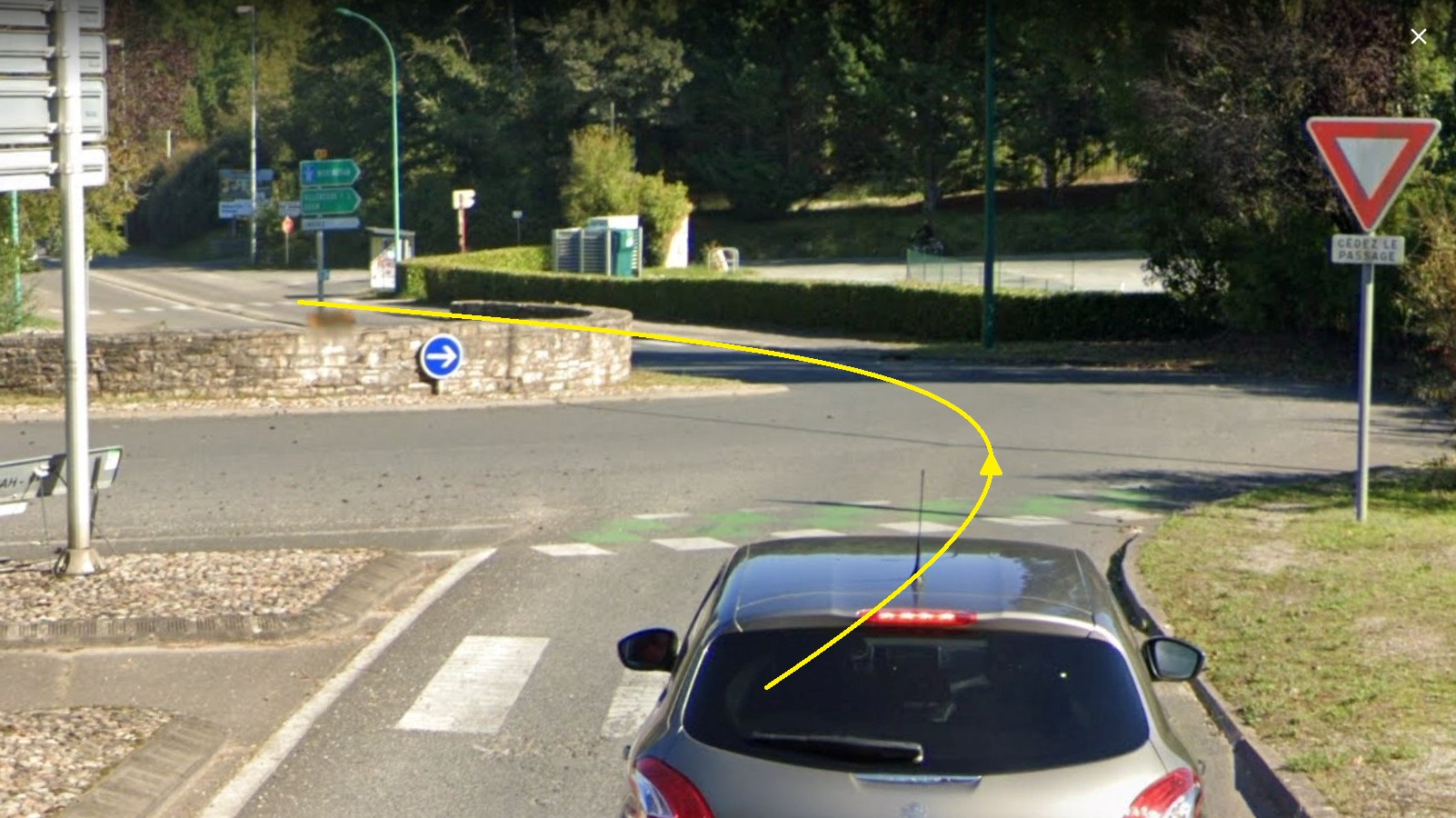 Here’s that second roundabout. It’s on a false flat downhill and presumably this is where the riders get funneled into a single lane, it’s asking for problems. 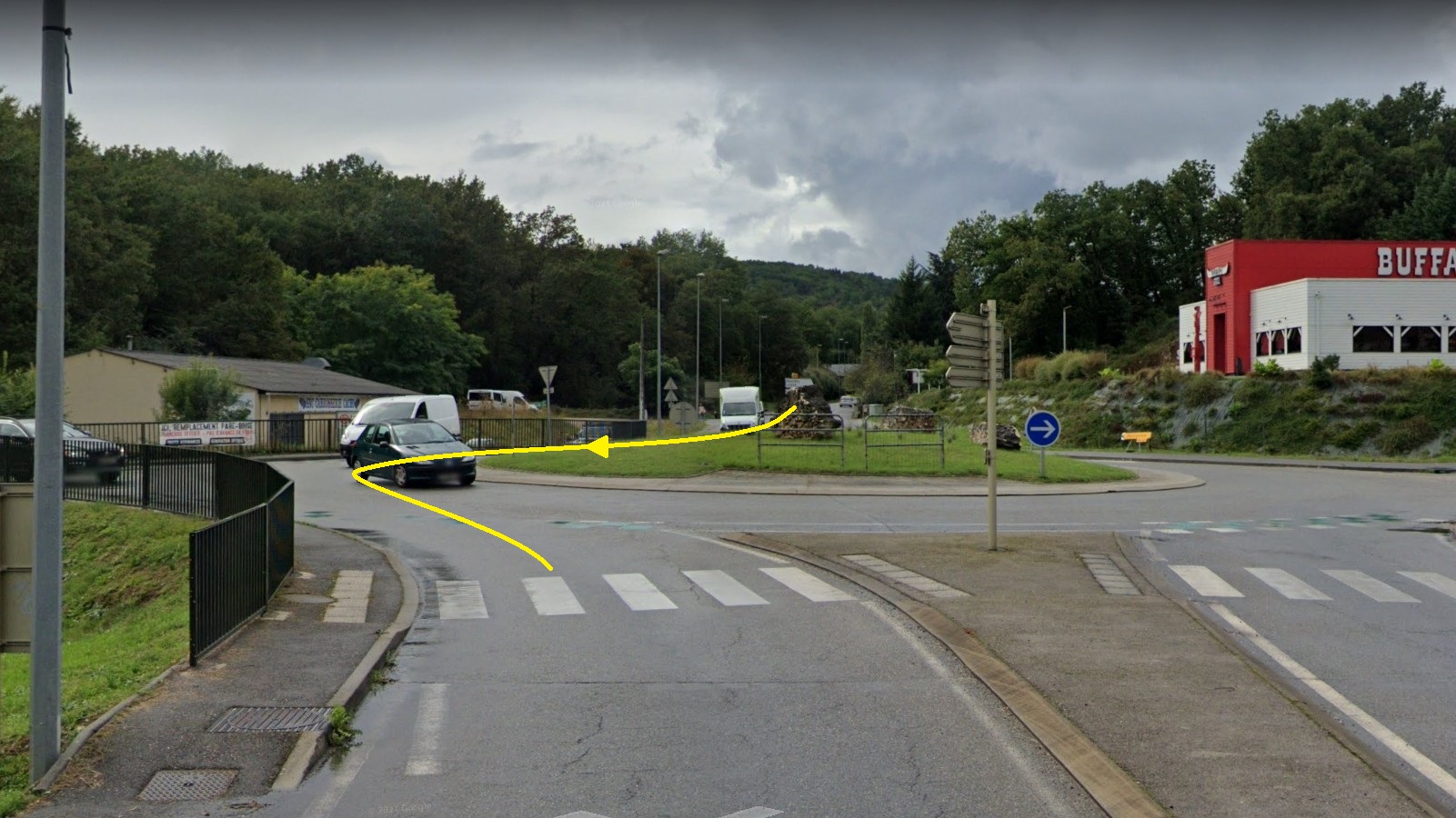 And here’s where the single-lane section ends, after the fifth roundabout. It looks like this for the 500 or so preceding metres too. I find it incredible that ASO decided this is the appropriate route into Cahors… 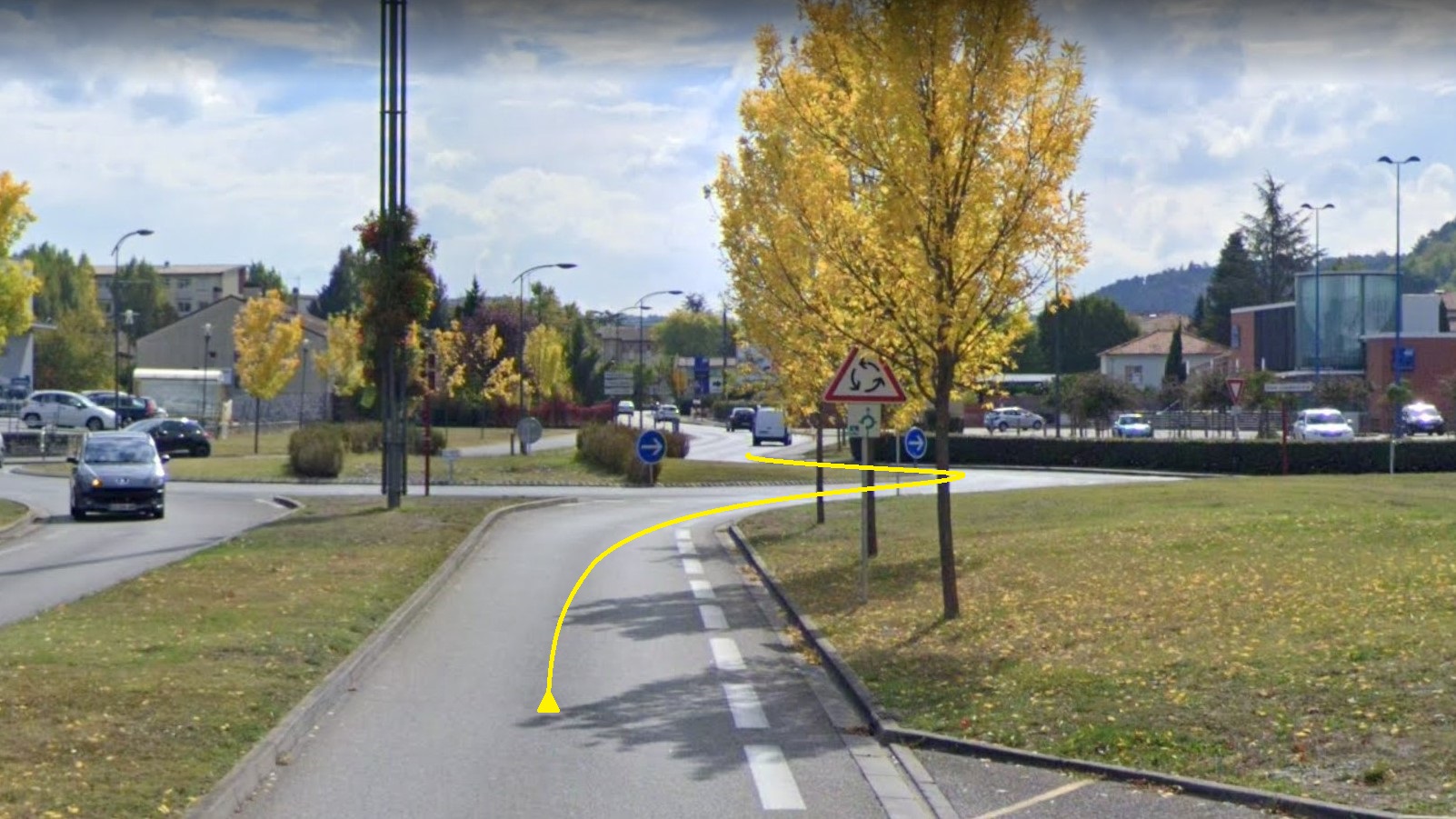 Once this section is over, the road goes back to normal until this roundabout, this time only the left side is open as the riders head onto the bridge across the Lot. 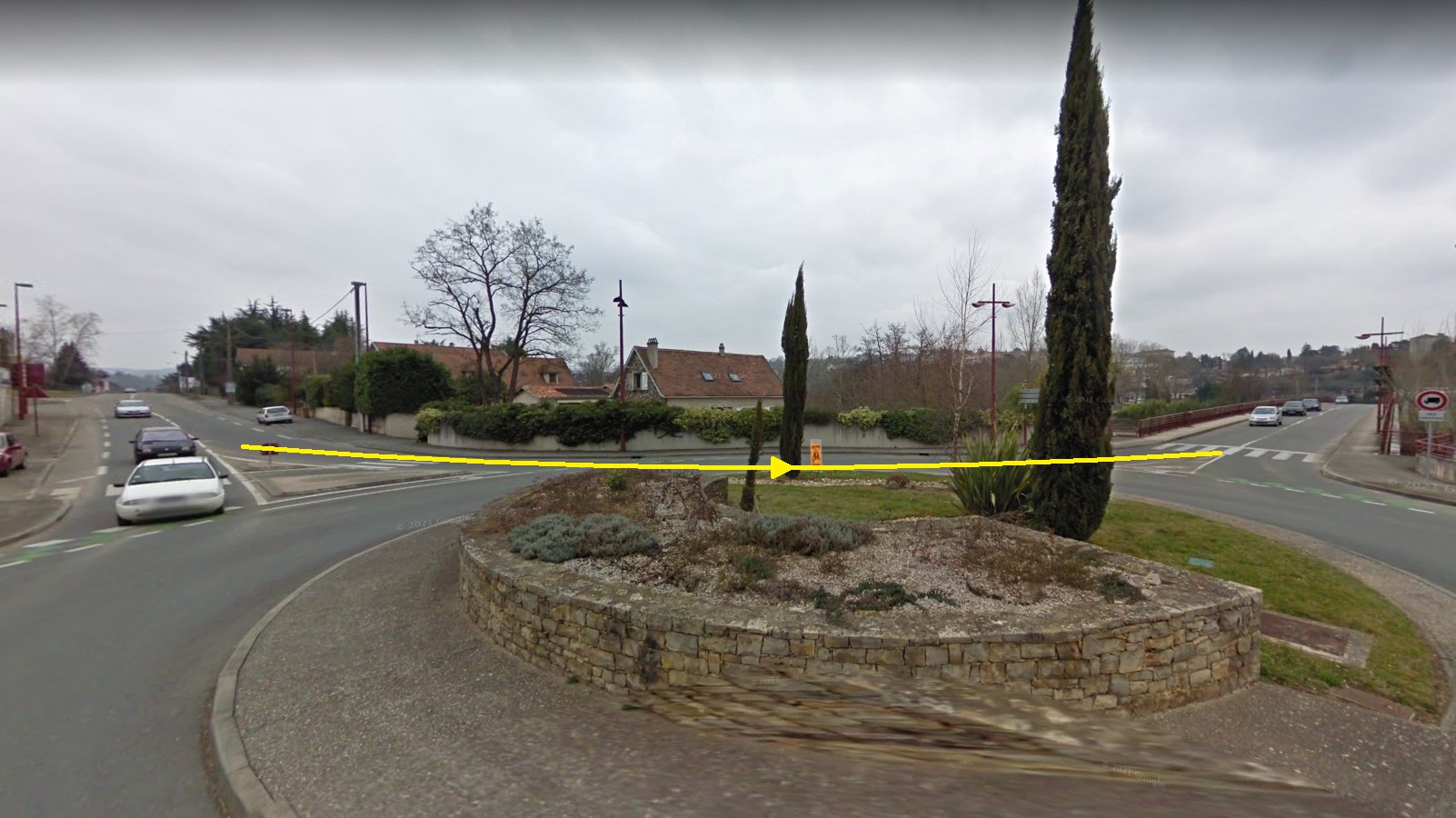 On the other side of the bridge, there is immediately another roundabout, to the right this time with once again the long way round not open. 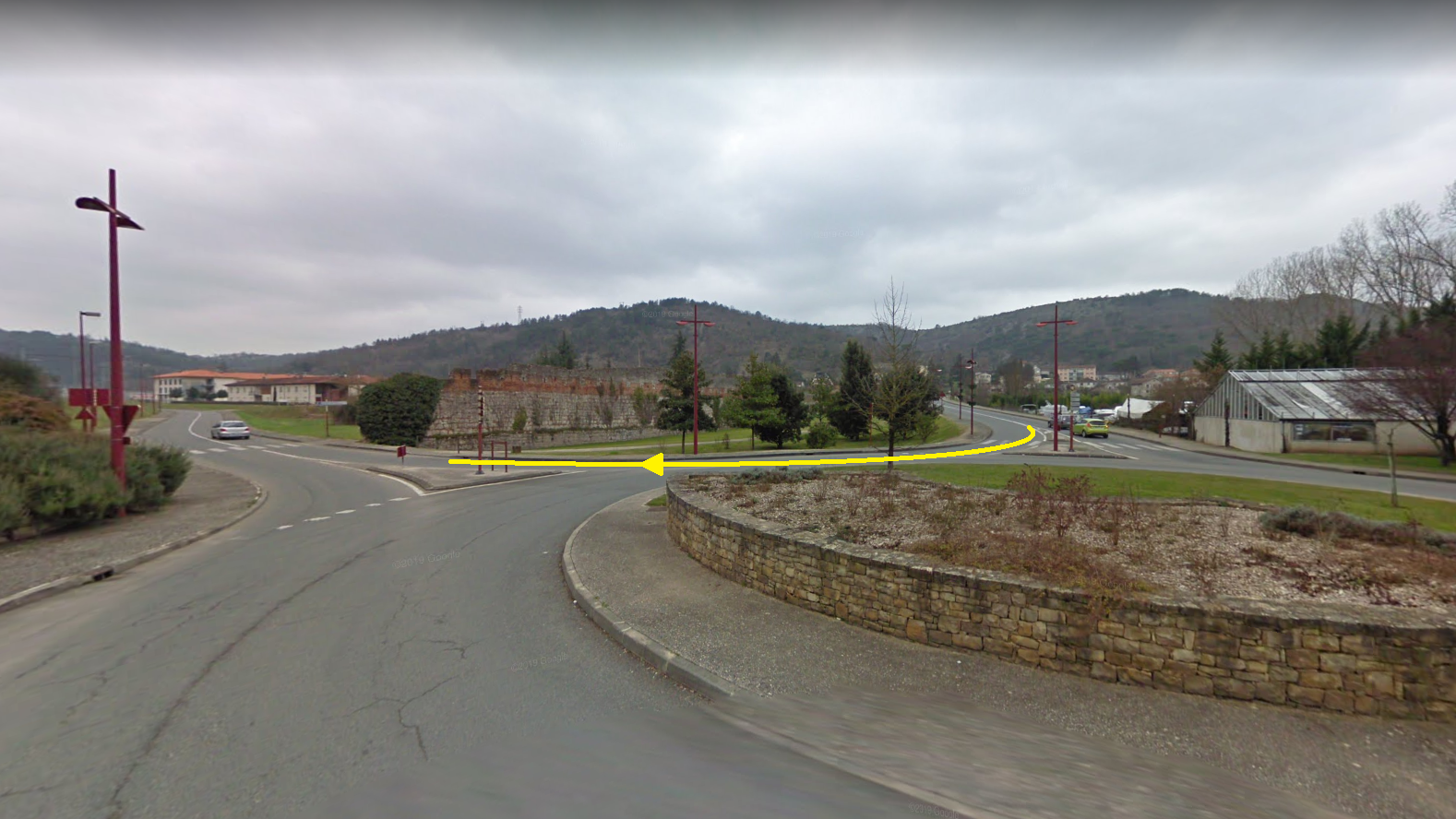 The road on this side of the river is quite narrow. The next obstacle is a set of tight bends, left, right and again left, at 2 kilometres from the line; the picture below is at the entrance to the first bend. There are some speed bumps leading into this section. 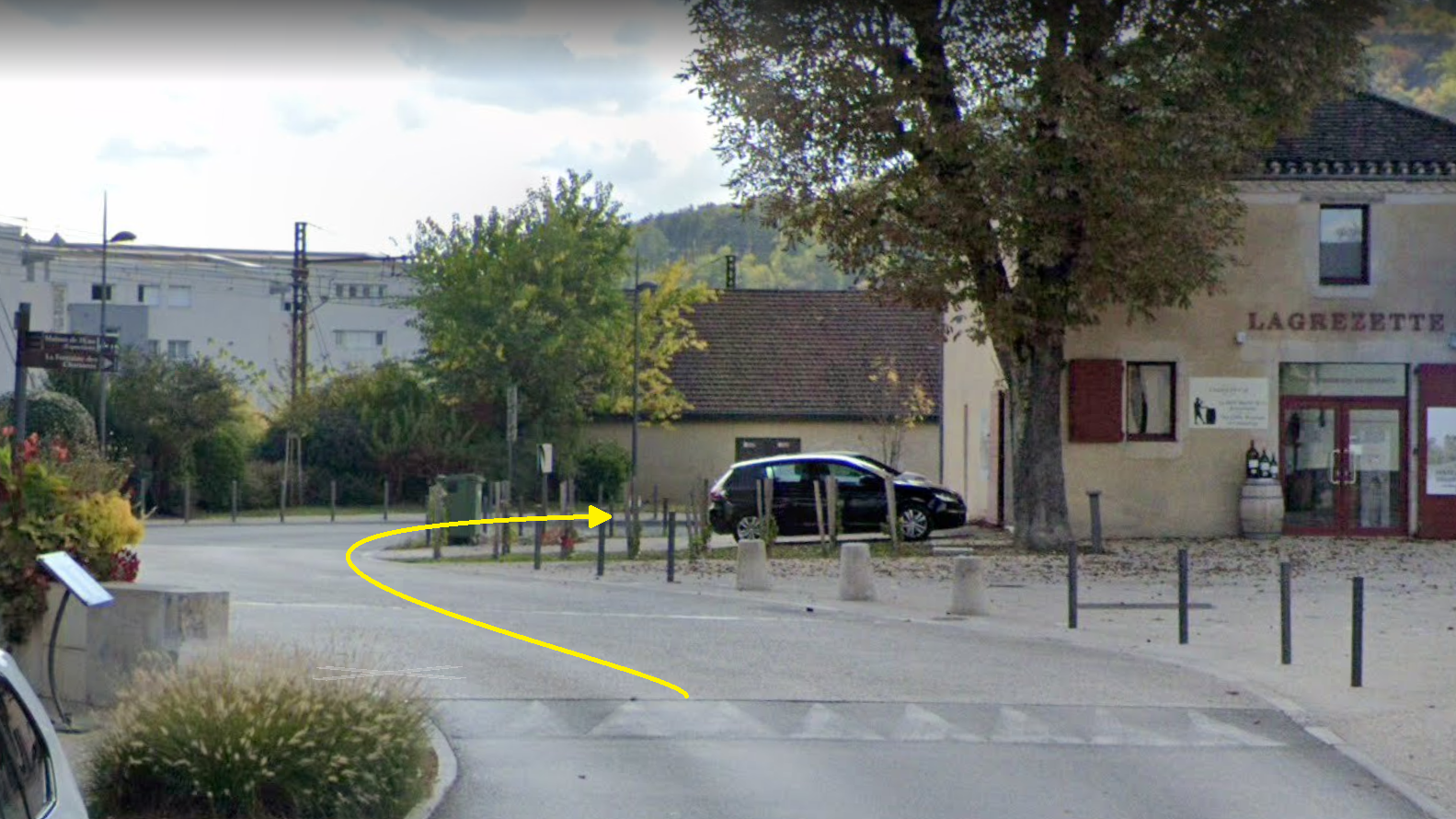 Coming out of these bends, there is a small unmarked roundabout that can and presumably will be paved over. The road continues to bend as it follows a meander in the Lot, again these curves are a bit tight. At the flamme rouge, the road starts to rise and immediately after this, we reach the final roundabout. 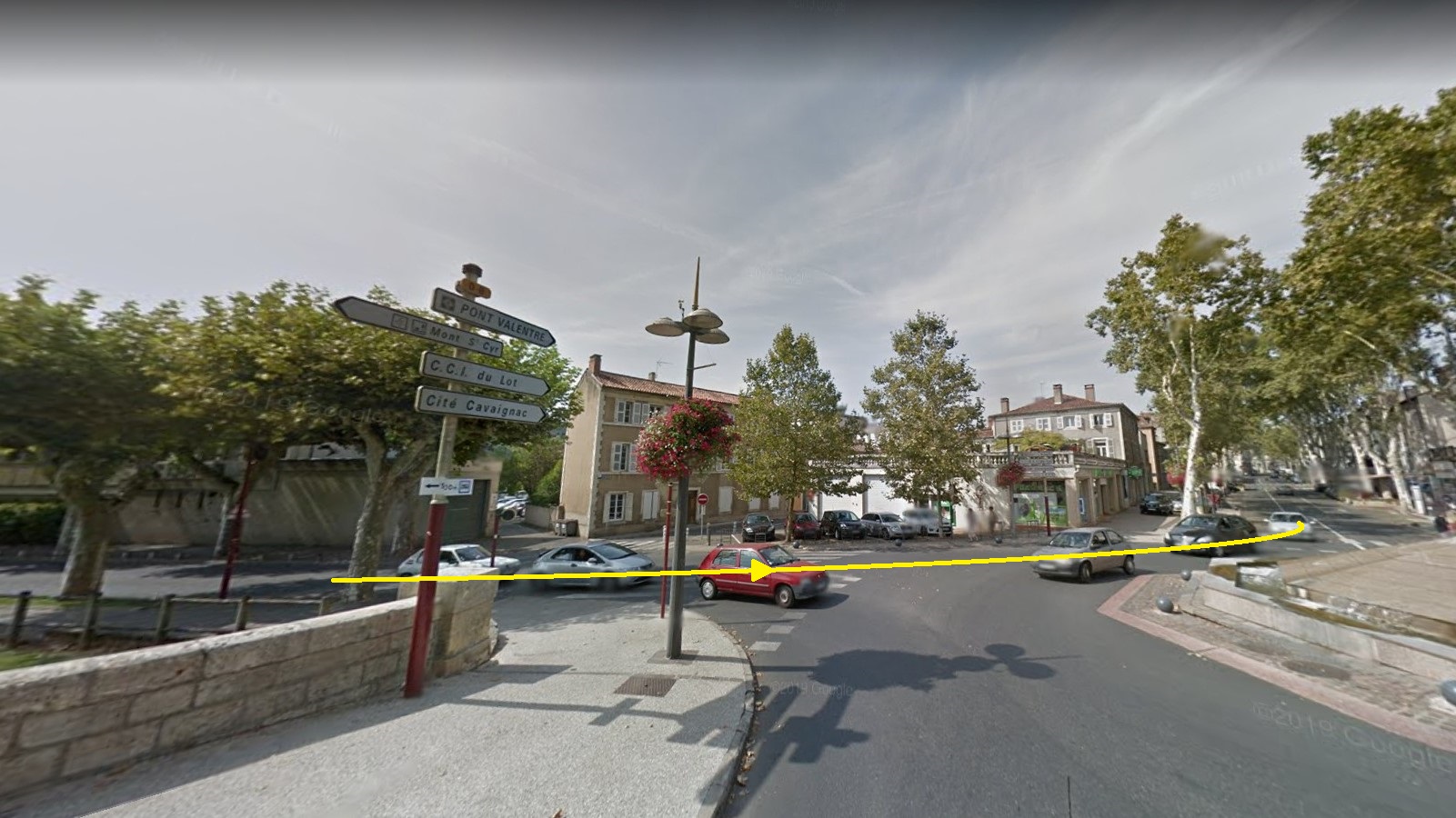 The incline gradually increases until 50 metres from the line, these final 50 metres are flat.

Cahors was already a city in Roman times, and rose in medieval times thanks to its strategic trade location and banking activities. Prosperity continued to rise until the Hundred Years’ War, which disrupted the trade upon which the city was built. Upon peace, it never reached those heights again. It is also the birthplace of Léon Gambetta, who proclaimed the Third Republic after the Franco-Prussian War brought an end to French monarchy for the final time. The main boulevard upon which we finish is named after him.

Fortified 14th-century Pont-Valentré in Cahors. Built in response to the outbreak of the Hundred Years’ War, it is now on the UNESCO heritage list.
Last edited: Jul 21, 2022
Reactions: Carols, TourOfSardinia, Jagartrott and 6 others

Ewan or WVA for the win.
Reactions: Sandisfan

WVA will attack on the last hill to TT away to victory.
Reactions: Sandisfan

Vintage Ewan finish. If he's in good position he wins. He finally has some form.

Ineos will cause carnage with echelons. Ultimately G will be in yellow by the end of the day.
Reactions: Didinho, SHAD0W93, Arked and 9 others

So is this the hottest Tour on record?
K

Bonimenier said:
Ineos will cause carnage with echelons. Ultimately G will be in yellow by the end of the day.
Click to expand...

And then he will crash in his style in the last meters of the TT losing the race by a second.
I

Bonimenier said:
Ineos will cause carnage with echelons. Ultimately G will be in yellow by the end of the day.
Click to expand...

Sagan probably the freshest of the remaining sprinters, though WVA seems to be a robot right now so who knows.
Reactions: Sandisfan

Wout van Aert for the win!

Actually, sadly, he'll be wrecked from his efforts today, so likely not. But the Champs!
Reactions: Sandisfan
W

The only guy in the top 10 who lost a Tour in the crosswinds
Reactions: SHAD0W93 and Sandisfan
B

DaLong said:
Sagan probably the freshest of the remaining sprinters, though WVA seems to be a robot right now so who knows.
Click to expand...

Sorry. I know this isn't about the race exactly, but it's pretty terrific.

Any KoM points up for grabs?
B

Amazinmets87 said:
Any KoM points up for grabs?
Click to expand...

2 times 1 point and also 1 point on stage 21. Not enough to dethrone Jonas.
Reactions: SHAD0W93, SafeBet, Sandisfan and 2 others

Again, really hard to say with confidence if this is sprint or breakaway.

One might think this is 90% likely to be a sprint but "flat" stages late in Grand Tours (after mountains) often get weird. This is possibly even more the case at the Tour when there is still the Champs Elysee to think about, which carries more prestige than this.

Looking at penultimate Tour "flat" stages in the last ten years, when they come after mountains (small sample size, I know):

I think today's stage is still probably a sprint, because at least five teams will think they have a worthwhile chance in a sprint, but everyone is very tired. And it'll be very hot. If, say, three of those five interested sprint teams get a man in the breakaway then it won't be coming back.

Philipsen (3-1) in case it's a sprint. I think he's the fastest right now, plus the slight uphill finish suits him, plus he appears to have coped better in the mountains than the other sprinters (hasn't finished in the last group on any of the last three stages).

DeWulf (275-1) from the breakaway. I think this guy has really good legs. He looked super powerful getting into the early breakaway yesterday, even though it didn't stick. He's generally good at making breaks (got into 3 in the last 5 stages of last year's Vuelta) can win solo and has a decent sprint if it comes down to a small group. He's a total longshot, obviously, but I think he's paying at least double what he should be.
Reactions: SHAD0W93, SafeBet, Sandisfan and 2 others

The best climber is getting the jersey. I'm with Lance when it comes to this jersey.

IndurainsTdF1994 said:
The best climber is getting the jersey. I'm with Lance when it comes to this jersey.
Click to expand...

No doubt there are better climbers than Geschke. But we’ve all watched racing long enough to know how these things work. Do we really think Peter Sagan was the best sprinter all those years he won he green jersey? He always consistently finished near the top and that’s one way to win it. Despite not winning a stage, Peter Sagan (Tinkoff-Saxo) was undoubtedly one of the most impressive performers at this year’s Tour de France. His remarkable consistency (12 top-10 finishes) earned him the green ‘sprinters jersey’, despite changes to the points classification designed to favour...

Armstrong has a point, of course. But he is also seems most himself when he’s trashing something or someone. We all know the type.
Reactions: SHAD0W93 and Sandisfan
M

Actually, sadly, he'll be wrecked from his efforts today, so likely not. But the Champs!
Click to expand...

The thing here is he doesn't get wrecked from these efforts, they are just a piece of Jane Fonda workouts for him. So it's Wout ftw, nice little opener before tt and the Champs Elysee.
Reactions: RobertCrawley

IndurainsTdF1994 said:
The best climber is getting the jersey. I'm with Lance when it comes to this jersey.
Click to expand...

It's still gotta sting to fight so hard for something, only for someone else to get it basically by accident.
Reactions: Carols, SHAD0W93, Sandisfan and 1 other person

RedheadDane said:
It's still gotta sting to fight so hard for something, only for someone else to get it basically by accident.
Click to expand...

And to get so close! Heartbreaking.
Reactions: Sandisfan and RedheadDane