Champagne and a bunch sprint. No other ingredients shall ever be included in the final stage of the Tour. Well, unless they do end up not finishing in Paris in 2024.


Route description
The stage starts from La Défense Arena, which will host the swimming events at the 2024 Olympics. It’s unusually close to the Champs-Élysees – had this been twenty stages earlier, they could have had a prologue between the two. Instead, we head for the usual route through the suburbs, passing the palace of Versailles and the obligatory final KOM at Côte du Pavé des Gardes.

From here, the route heads directly into Paris, skipping the Eiffel Tower but passing through the Louvre. Immediately after this, we reach the traditional final circuit, which is used for eight-and-a-bit laps. Of course, the Champs-Élysées is an absolutely brutal ascent, handing out KOM points in the first stage of the women’s race, the men are really being done dirty by there only being an intermediate sprint here (on lap 3, don’t expect the production team to pay attention to it because they never do).

After that, all eyes on the sprint. Just a little longer. 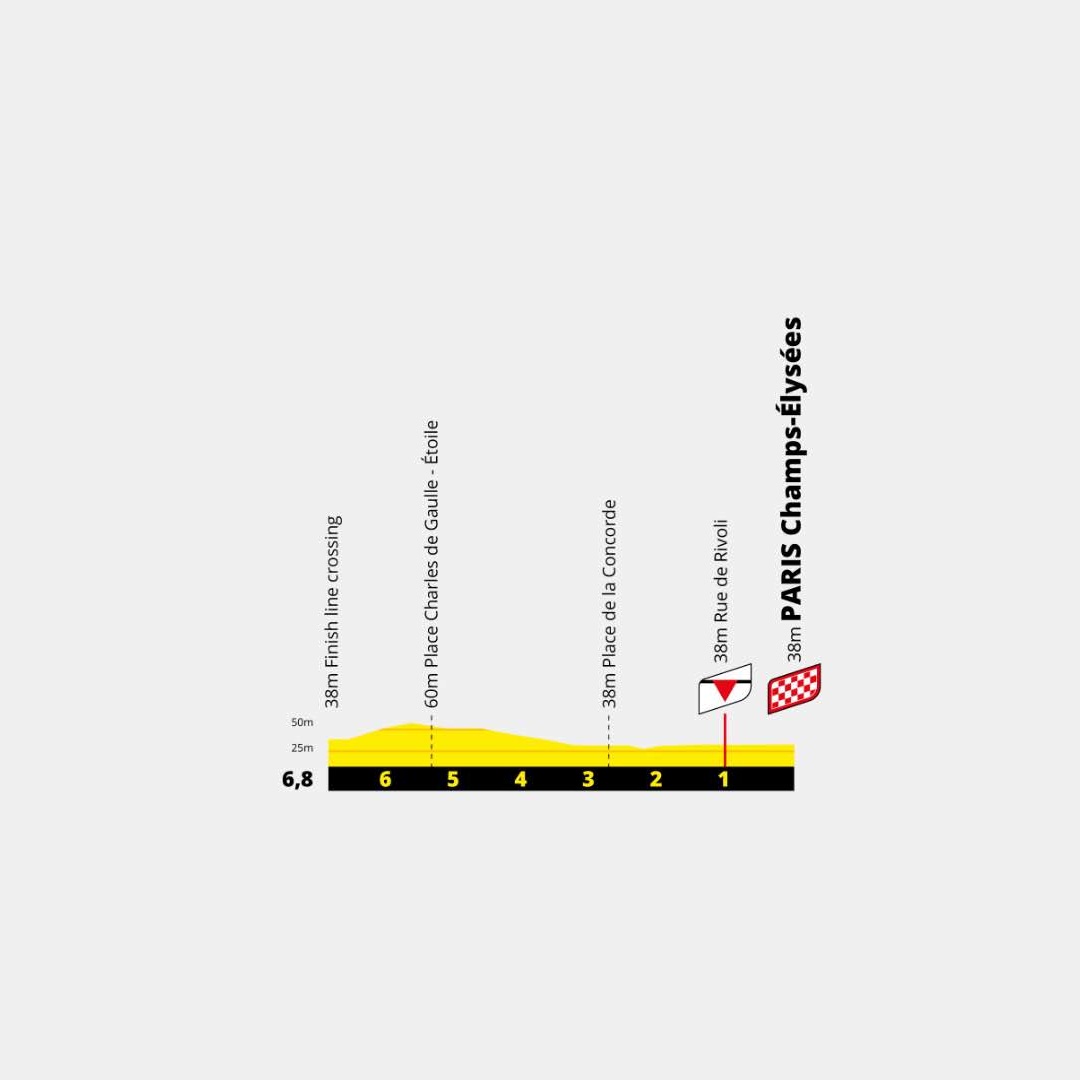 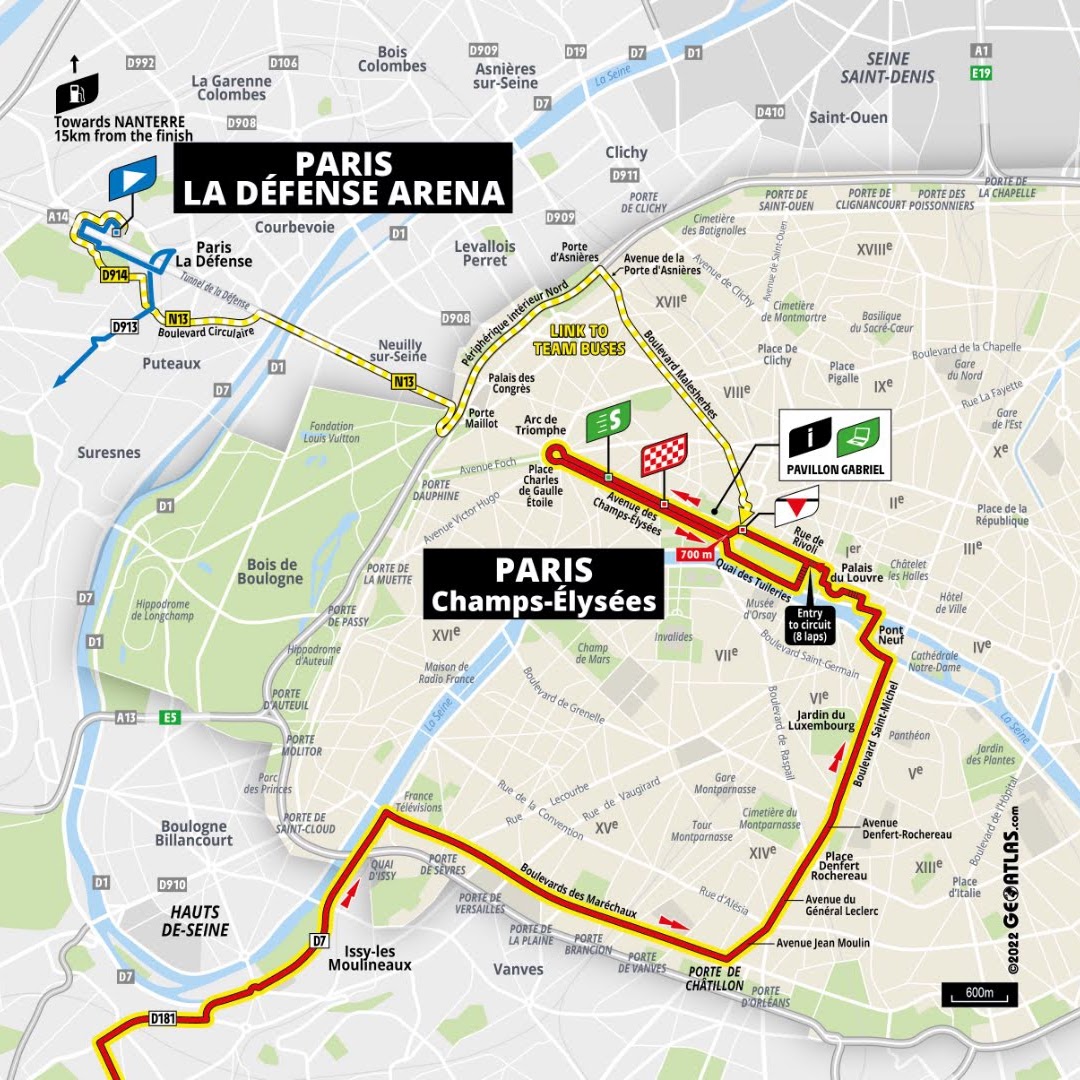 Keep in mind that they moved the finish away from the final curve last year, bumping up the final straight to 700 metres. They’ve kept that arrangement for this year.

I was actually about to write something about Paris here before I realised there’s not much point. No picture of a cycling bridge for me to add for this capital city, maybe sometime in the future considering the progress Paris is making…

And no, I won’t be repeating the bridge picture for every stage gimmick next year. Assuming I even have the time for these writeups by then. We’ll cross that bridge (pun intended) when we get there, though.

Pont Neuf, the final bridge of the Tour.
Reactions: postmanhat, red_flanders, StryderHells and 11 others

Using the shortest route, from start to finish would take about six kilometres (entrance from the another side of Arc de Triomphe). Now it's about 60.

Benoot will win this one.
Reactions: Carols, JosefK, Sandisfan and 1 other person

They should swap brains instead. I'd like to see Vingegaard attack from kilometre zero.
Reactions: Carols, hscoach2, Sandisfan and 1 other person

WVA to make it back to back like last year and keep his streak of winning +1 stage each edition going.
Reactions: Fuente De, claude cat and Sandisfan

Would love to see another ITT ala Lemond vs Fignon on the Champs. I was just a kid but remember it being riveting even at that age. I know tradition, etc but it would be super cool to have the final stage mean something to GC.
Reactions: Fuente De, StryderHells, claude cat and 4 others

A largely ceremonial stage with very predictable scenery, but I'll still watch because that's just what you do when you watch le Tour...

Thanks Devil's Elbow for doing all the write-ups! (Especially that one time when you had to travel to Germany where they apparently have no internet. )
Reactions: Carols, Devil's Elbow, JohnWayne and 10 others

Here's a conspiracy idea. Netflix scripted this whole Tour to fit their narrative. It's just too perfect.
Reactions: cen, SarahtheDane, Sandisfan and 2 others

Hoping for a Philipsen victory, I have gotten very fond of him throughout this race. A respectable sprinter how can get across obstacles, he looked mighty fine yesterday, but got snubbed..
Reactions: StryderHells, FrontHeadlock, Sandisfan and 1 other person

Tricycle Rider said:
Thanks Devil's Elbow for doing all the write-ups! (Especially that one time when you had to travel to Germany where they apparently have no internet. )
Click to expand...

Absolutely! Great write-ups. I love reading them and look forward to each one. Excellent job @Devil's Elbow
Reactions: red_flanders, StryderHells, Devil's Elbow and 5 others
B

As soon as Vingegaard goes back to the car to drink champagne, Pogacar will attack.
Reactions: Tobi, cen, Fuente De and 5 others

Ah, the Champs is already here. So quickly as always, especially so since I missed a week. The forum is quite funny during the Tour, and I loved seeing it for the first time this year. Thanks you forum members for a fun Tour!
Reactions: 75Driver, red_flanders, Lui98 and 8 others

get ready for Wout's next victory
Reactions: Summoned and Sandisfan

Jumbo Visma Fan :) said:
Ah, the Champs is already here. So quickly as always, especially so since I missed a week. The forum is quite funny during the Tour, and I loved seeing it for the first time this year. Thanks you forum members for a fun Tour!
Click to expand...

The rest of the year it's all seriousness.
Reactions: 75Driver, Fuente De, Lui98 and 7 others
Y

I expect BEX to line out their whole team for the last 5kms as they did in the last stage of Hungary - This is the only way to get Groenewegen to follow the wheel.
Reactions: Sandisfan

Gotta be WVA for this one.
Reactions: Sandisfan
K

This has been a very special Tour whether you're a Dane, a Jumbo Visma fan - or simply just a fan of cycling. Chapeau to all the riders who made this year's edition an incredible and unforgettable one!
Reactions: Carols, Stelvio and Sandisfan

Laporte to win the stage, because Wout was told not to in order to keep appearances...
Reactions: Lui98, Summoned and Sandisfan

RedheadDane said:
The rest of the year it's all seriousness.
Click to expand...

As serious as the “.” is.
Reactions: gregrowlerson, Sandisfan, Jumbo Visma Fan :) and 1 other person
H

I think this is great

Wout to "do a Vino". Meintjes to somehow wind up gaining a GC place after Bardet misses a split at the line. Albert Torres to drop 5 minutes to gain the lanterne rouge on the final day since Ewan is inevitably going to try to compete in the only sprint in a couple of weeks that he's made it to.
Reactions: Rechtschreibfehler, Red Rick, Lui98 and 2 others
You must log in or register to reply here.
Share:
Facebook Twitter Reddit Tumblr WhatsApp Email Link