Early thread because I'm away all day tomorrow to places without reliable internet (I'm heading into Germany).

The second sprint opportunity, but also the second echelon opportunity. There may not be an eye-catcher like the bridge on the previous stage, but the direction should be more favourable and the terrain onland seems a little more exposed this time – this might actually be the better day to blow up the race…


Route description
The stage starts from Vejle, traditionally the location of the queen stage in the Tour of Denmark. No Kiddesvej for this peloton, though, even though we pass its foot both in the neutralisation and at the bottom of the first categorised climb. Instead, we start with a loop through Jelling, the capital during the Viking era. The closest thing to a real hill that is used here is the uncategorised Hørupbakken.

Upon returning to Vejle, it’s time for the first categorised climb of the stage, Côte de Koldingvej.

From here, the route mostly heads south on roads with exposed sections longer and more frequent than yesterday’s, and things pretty much stay that way most of the day. The picture below is at the end of an exposed section about 40 kilometres in, but really I could have posted ten similar-looking locations here. 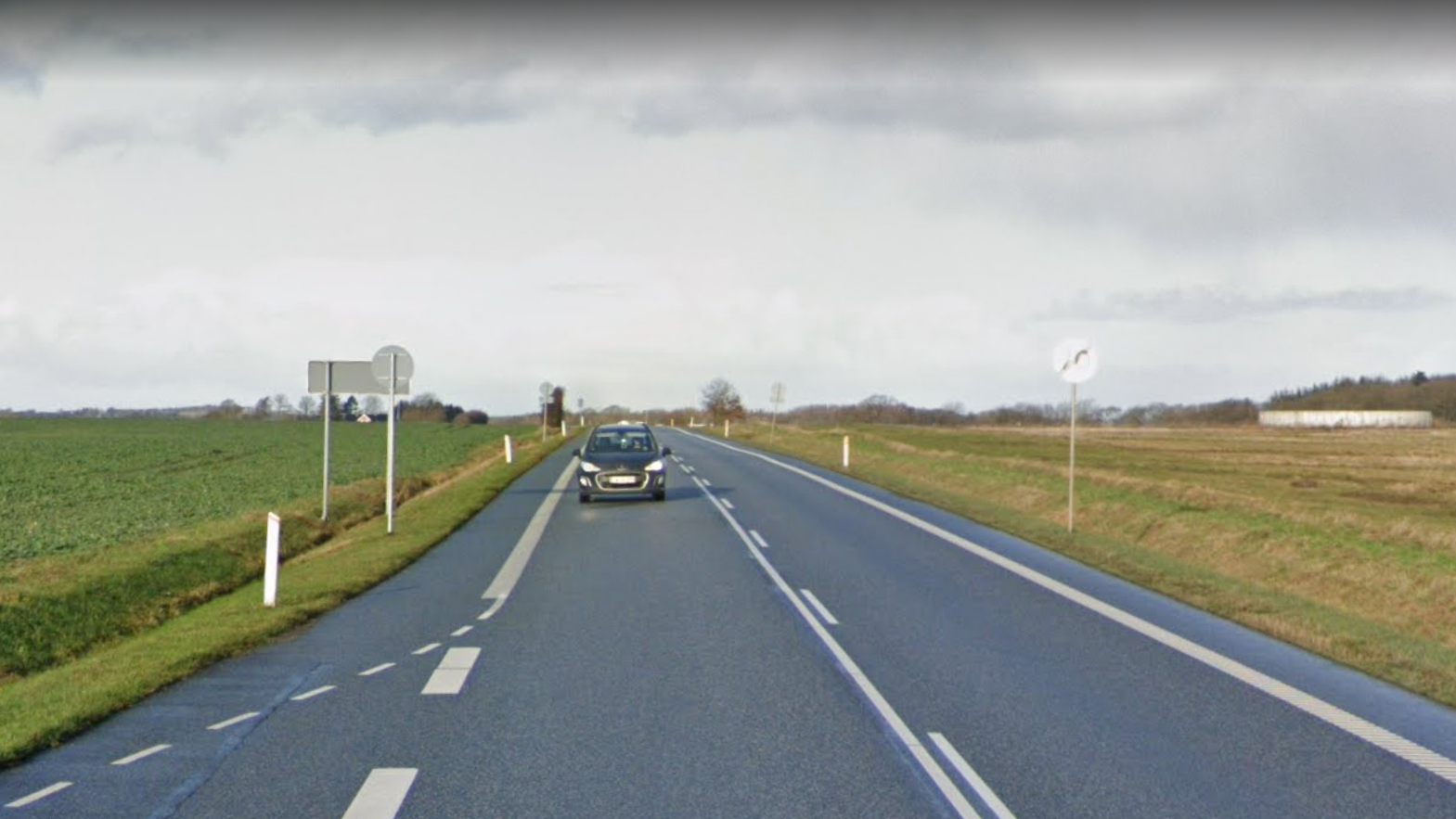 If no wind, the next two moments to stir us from our slumber will come almost halfway through the stage, at the Côte de Hejlsminde Strand…

…and, more importantly, the intermediate sprint in Christiansfeld, a town on the Unesco World Heritage List for its well-preserved centre, built entirely by the Moravian Church. 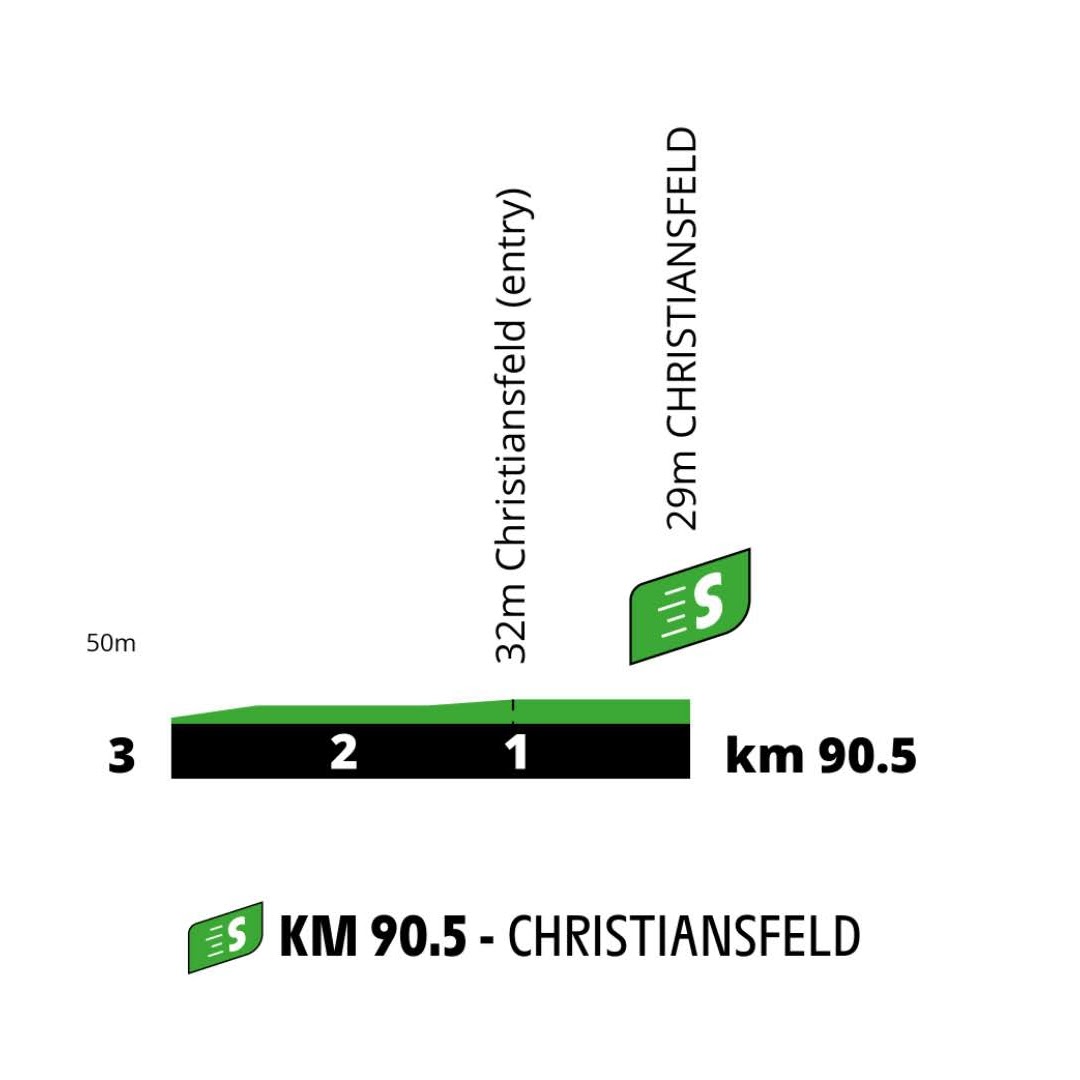 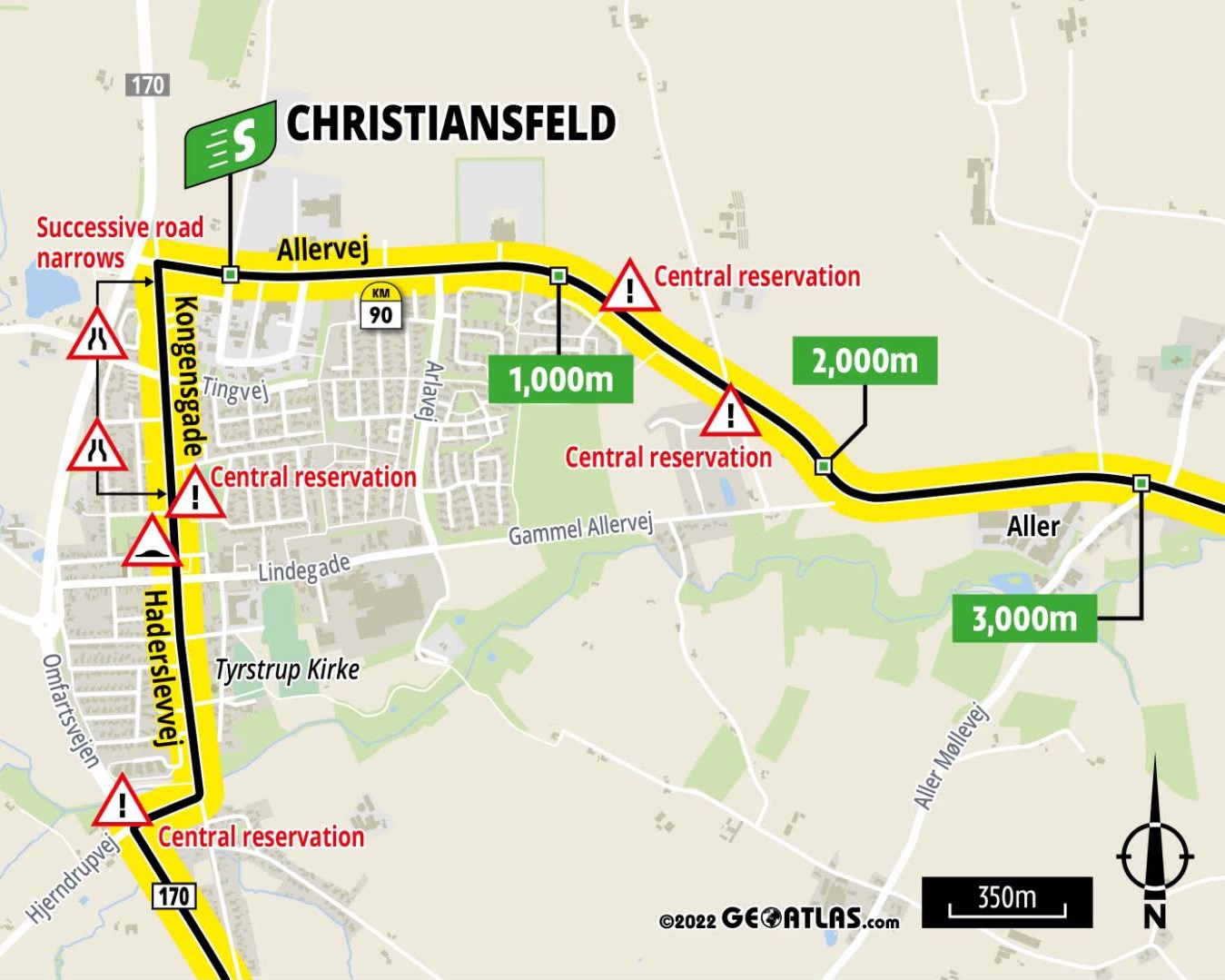 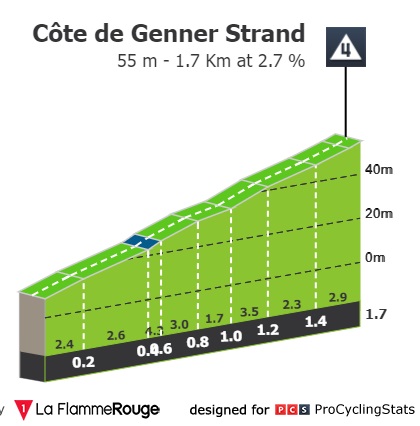 Indeed, the climb right before Aabenraa would have been the better option.

The route heads east towards Sønderborg from here, passing by the summer residence of the Danish royal family – they really crammed in every bit of monarchy veneration they could into this Grand Départ. 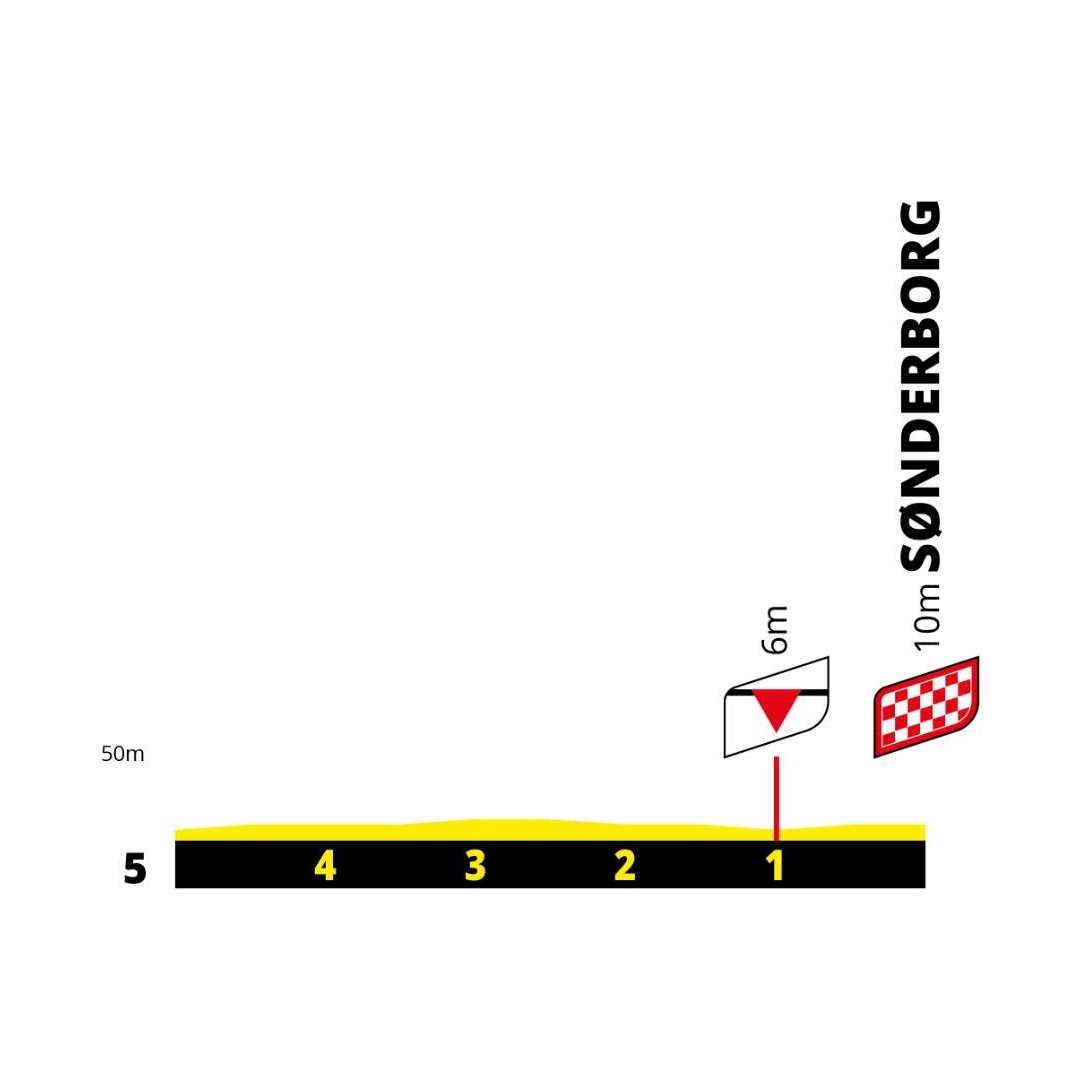 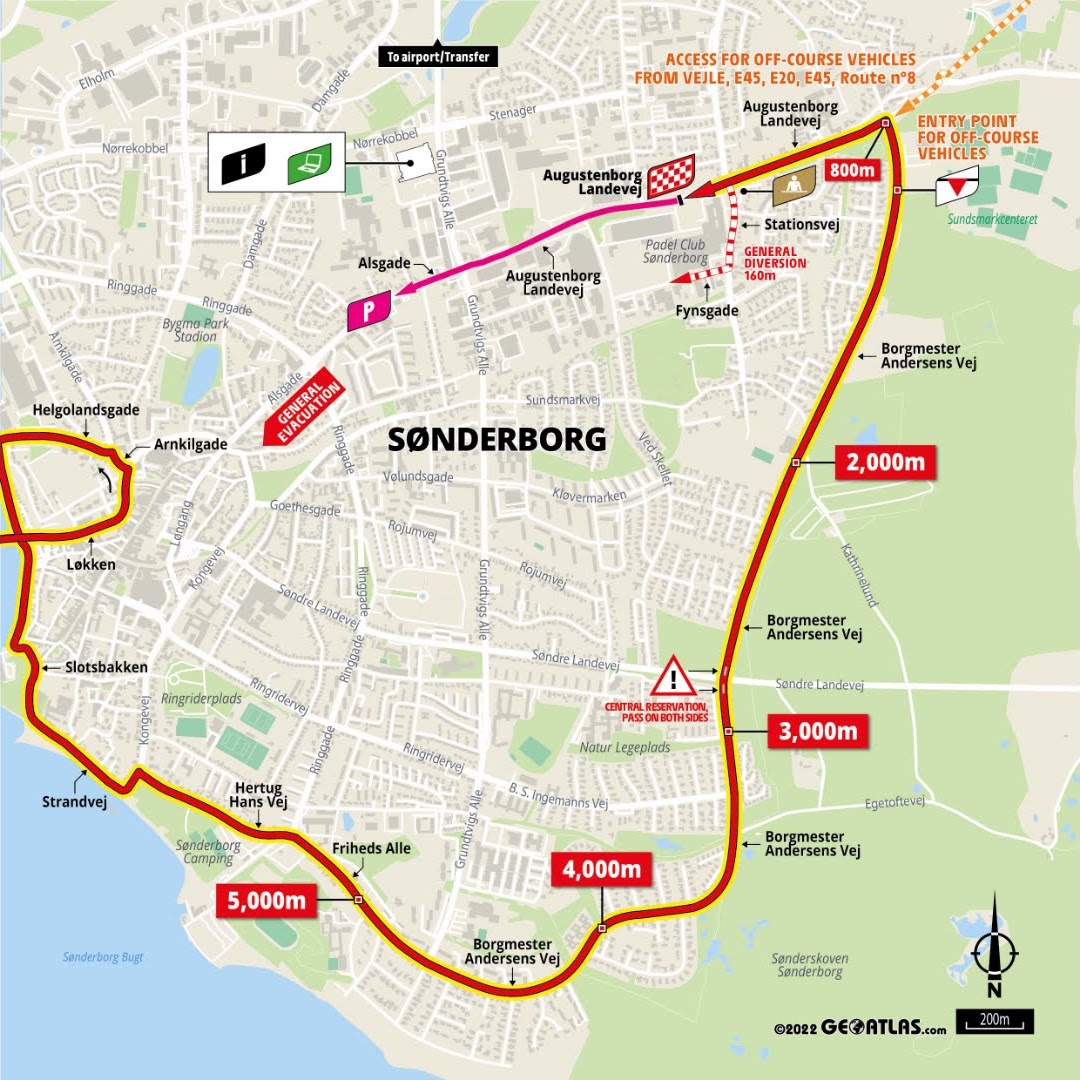 Not that much to say about this one. They enter town really early, at 10k to go, start by passing through the city centre (with some tight turns and urban cobbles), then head out onto the ringroad which is followed all the way until 800 metres from the line. There are traffic islands marked on the map at 2.9k to go, both sides are open but the right side is obviously the faster here. 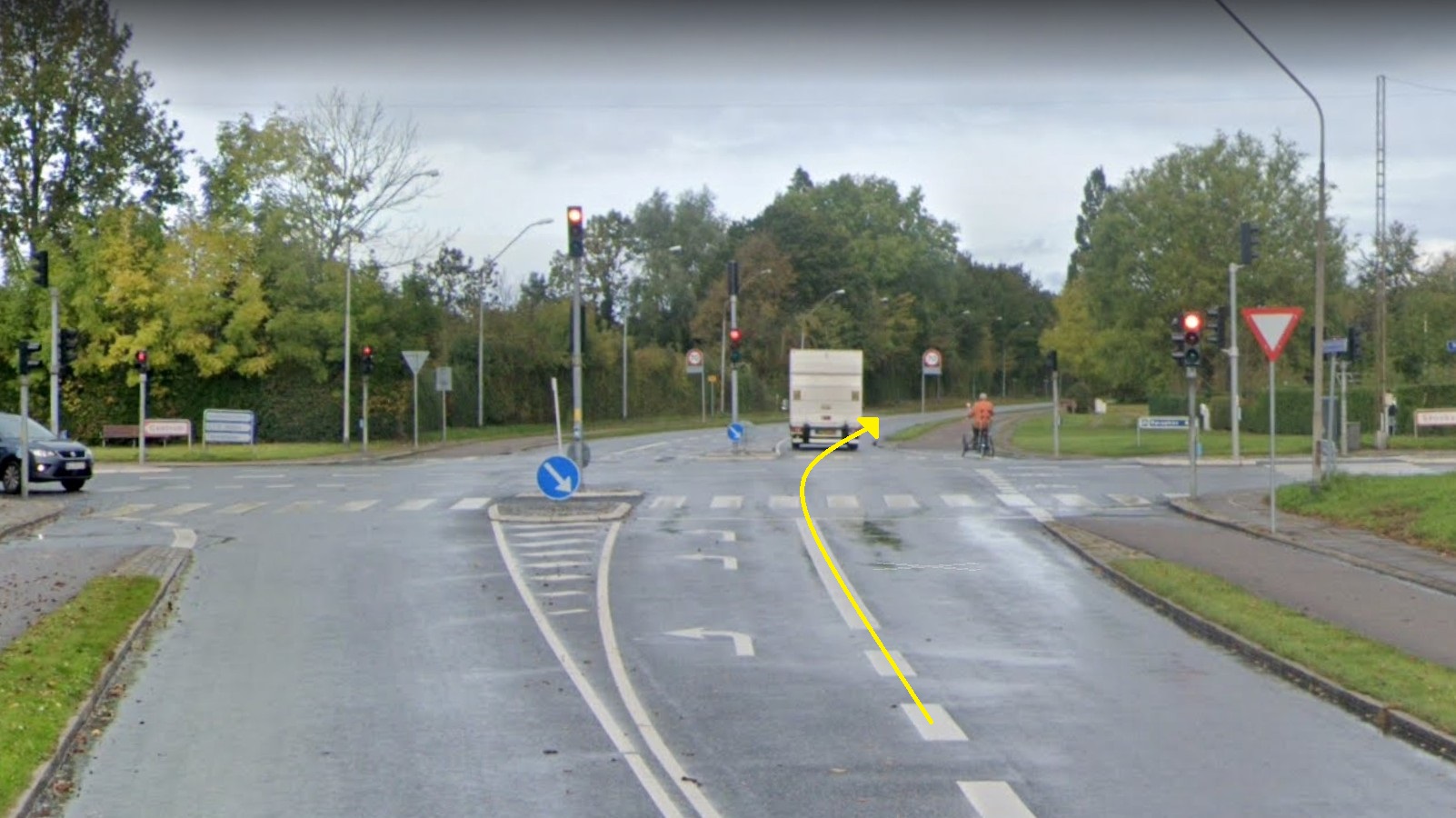 This is the left-hander at 800 metres to go, as far as I can tell the traffic island will be removed. From here it’s pretty much a straight shot for the line, as I think the finish line is exactly at the point where the road starts to curve right rather than in that curve, unlike the previous stage. If not, it’s 50 metres of the road dragging right at most, it really shouldn’t have a big impact. 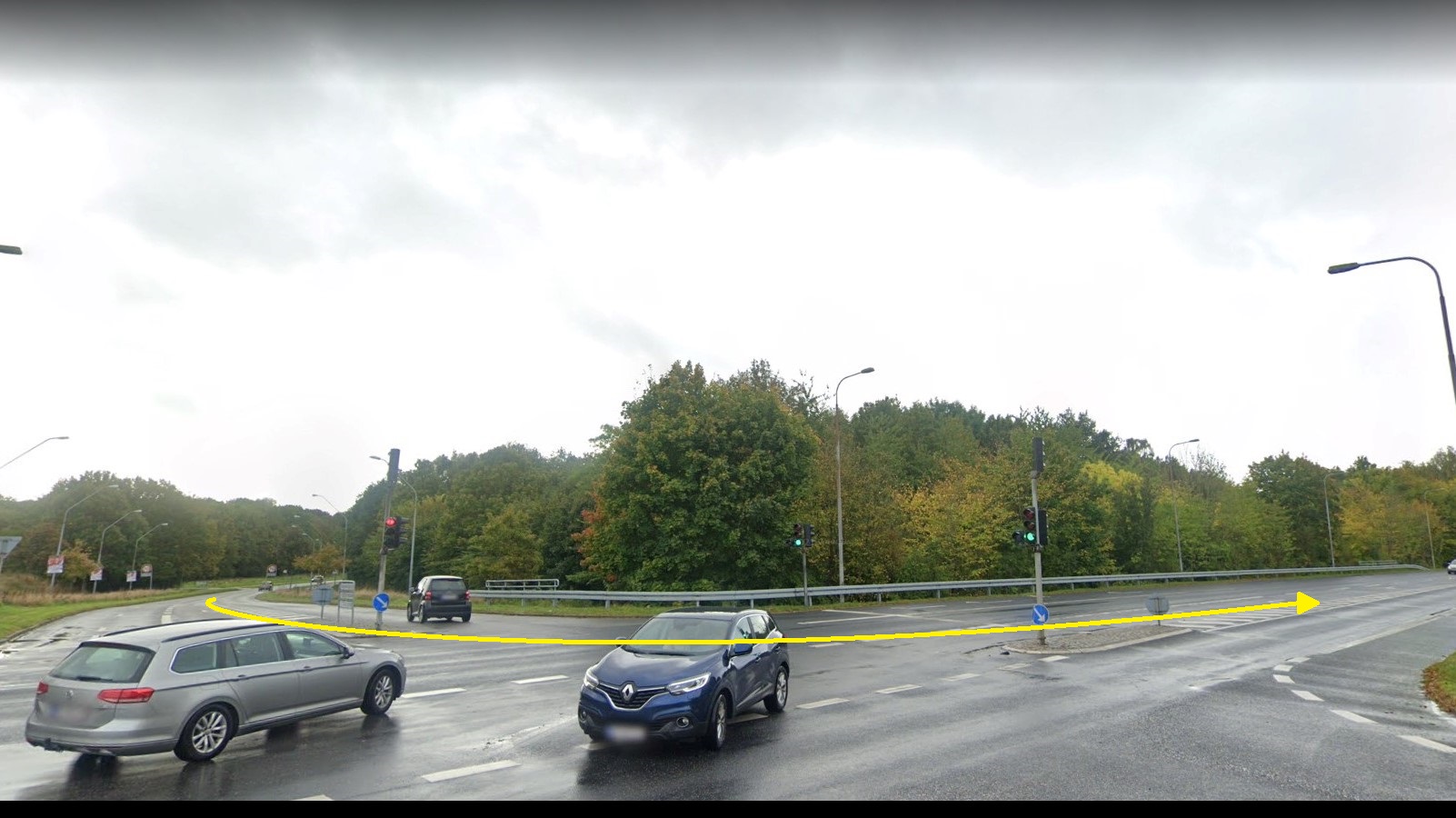 Sønderborg, the capital of the island of Als, doesn’t have the most exciting history, but its mainland suburb of Dybbøl was a battlefield in both Schleswig Wars, as Denmark and Prussia fought over historically Danish-controlled, but majority-German Schleswig-Holstein. The first time, Denmark won this battle, and ultimately the war. The second time, in 1864, the Prussians dealt what proved to be a decisive blow, and Denmark ceded all of Schleswig-Holstein. Following the First World War, Germany was forced to allow a referendum in majority-Danish Northern Schleswig, which voted decisively in favour of reunification with Denmark, though a small pro-German majority emerged in Sønderborg itself.

Following reunification, Denmark invested heavily in Southern Jutland/Northern Schleswig, this included the construction of this bridge in Sønderborg.
Reactions: CyclistAbi, steffr222, Tricycle Rider and 4 others

The profile and map are missing a couple of marks. 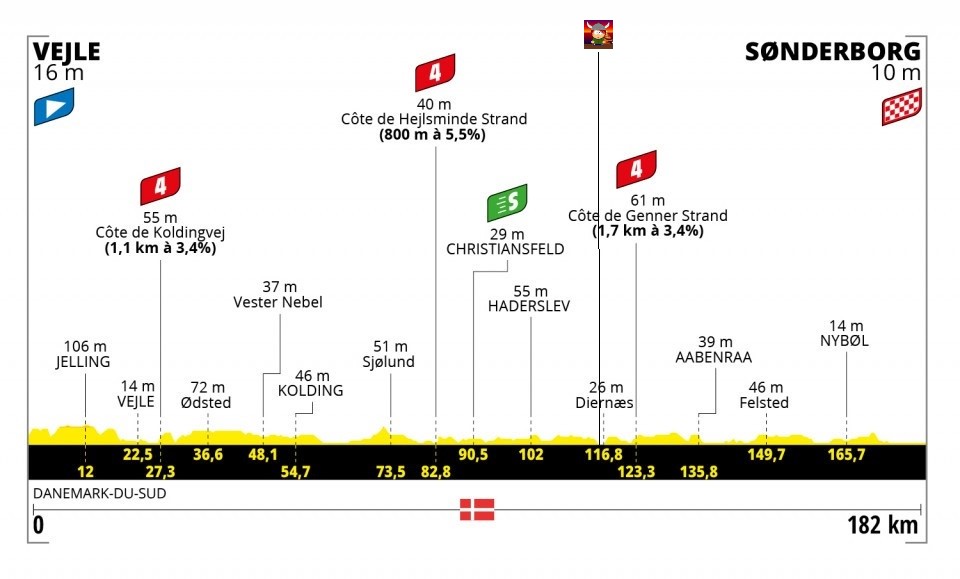 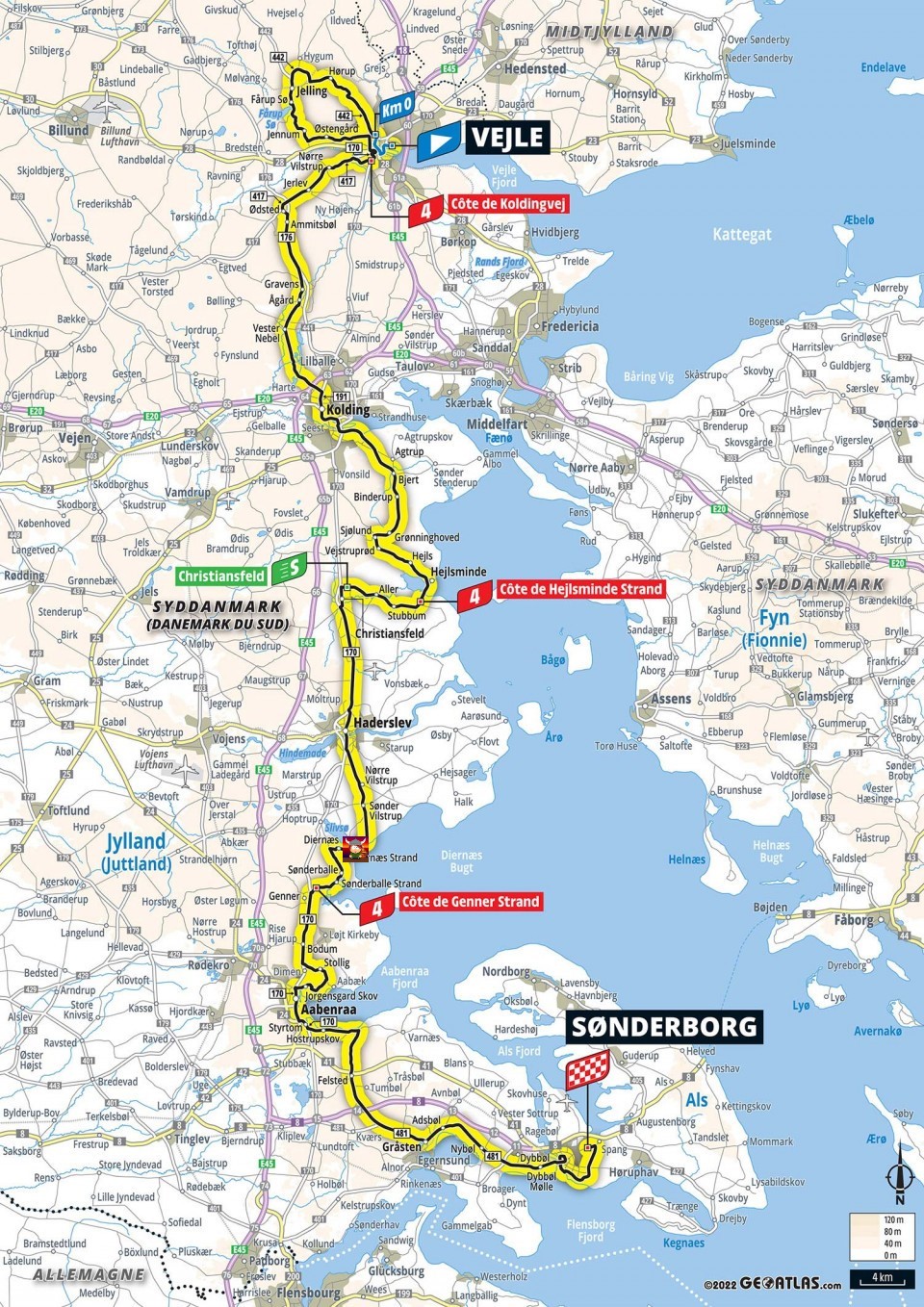 Time to sticky this one.
Reactions: Sandisfan

The riders might wanna be careful in 'Styrtom'.
Reactions: SHAD0W93 and mortand

Any wind forecasts for us?
Reactions: Sandisfan

Jumbo Visma Fan :) said:
Any wind forecasts for us?
Click to expand...

Looks like tail/cross in the final stretch 25km or so?
Reactions: Sandisfan and Jumbo Visma Fan :)
S

Cyclingnews and their clickbait headlines trying to start a damn war here, as if things weren't tetchy enough, I was about to get the league of nations on the phone.

Reactions: DoYouEvenRideBruh, noob, Lui98 and 4 others

Repeat of today. Another easy win for Jakobsen, another 2nd place for Wout.
Reactions: Sandisfan

Tim Cahill said:
Cyclingnews and their clickbait headlines trying to start a damn war here, as if things weren't tetchy enough, I was about to get the league of nations on the phone.

To add to this war. Last year Cav said Jakobsen will be at the tour next year so he allready knew for atleast a year that Jakobsen would go. Stop this nonsense please!
Jakobsen this year wins 11 out of 14 sprints. Cav is at 3 or 4 out of 13. It's a non-discussion.

Tomorrow Jakobsen wins again. Only challenge could come from Groenewegen or Ewan, but they need to be in position to challenge him.
Reactions: Didinho, Dekker_Tifosi, Lui98 and 3 others
C

Should Jacobsen get a green bike?
Last edited: Jul 2, 2022
Reactions: Didinho, dazaau, Sandisfan and 2 others

Carrick-On-Seine said:
Should Jacobsen get a green bike?
Click to expand...

He should glue a photo of Cav and/or Wout onto his handlebar so they'd get to cross the line first
Reactions: Sandisfan, Carols, SHAD0W93 and 2 others
C

Likely van der Poel to try to do something about that smirk on the van Aert face.
Reactions: Didinho, noob and Sandisfan

It's gonna be borefest but with beautiful scenery like yesterday.

The narrow Odsherred hills from stage 2 looked amazing with the packed crowds.

Still wish they had started in Odense and picked some proper hills rather than these three non-climbs.
Reactions: Carrick-On-Seine and SHAD0W93

Looks like such a boring and straightforward stage that serious things are bound to happen.
Reactions: Sandisfan and Skijumper Roglic fan
S

CyclistAbi said:
Looks like such a boring and straightforward stage that serious things are bound to happen.
Click to expand...

That‘s what I thought, too… In recent times, sometimes the (on paper) „boring stages“ developed to be the best stages.

The peloton today will consist of a 100% of riders who are still fresh, and who know a win today will bring them glory and much money in nearer future. I expect a nervous and motivated peloton.

Also for the ones like Pog, Rog or Vlasov, days like today‘s are not really easier than the „deciding“ mountain and TT stages. They still aren‘t allowed to be unconcentrated for even one second.

I also expect MVDP to try something in the finale. He races to win every time he starts a bike race.
Reactions: CyclistAbi
Y

Expect Bike Exchange to have 5 riders in front of Groenewegen for the last 4 kms, so there will be no excuse for Groenewegen losing the wheel.
Reactions: Sandisfan

Reactions: Sandisfan, SHAD0W93, Carols and 3 others

Big dig from Philbert either here or on stage 7
T

Go on lads give Cort 10 minutes you know you want to
Reactions: Sandisfan, SHAD0W93, Didinho and 3 others
Q

Wildcard teams really going all in before the rest day