The route of the 15th stage of La Vuelta travels from Ribera del Arriba to the iconic summit finish at Lagos de Covadonga. At 178.2 kilometres, the course is extremely hilly.

With 20 kilometres done the route crosses the Alto de Santo Emiliano after a 6.9 kilometres climb at 4.2%. Following the descent the riders continue on a string of non-classified hills to the Mirador del Fito. This viewpoint is crested two times – first at kilometre 100.1 and again at kilometre 137.6. It is an irregular ascent with the last 4.4 kilometres averaging a whooping 9.3%. Mirador del Fito offers a wide view over both the Picos de Europa and the coastline of the Cantabrian Sea.

The second passage of the Mirador del Fito is with almost 41 kilometres remaining. The first 10 kilometres are on descent before a nasty unclassified climb appears. For 4.7 kilometres the route climbs to San Martín de Bada. The average slope is 4.3%, so it comes across as tolerable – yet, the climb is pepped up with ramps much harder than that. As if to prepare the riders for what’s in store…

A 5 kilometres drop leads to 10 kilometres on the flat before the riders tackle the final haul up to the line. Lagos de Covadonga did serve twenty times as a summit finish in the Vuelta a España. If you think of the first inclusion, in 1983, it’s clear that the ascent to the lakes has become one of the Spanish Grand Tour’s favourite climbs.

And rightly so. The scenery is spectacular and the same goes for the climb. The distance is 12.2 kilometres and the average gradient 7.2% – nothing special, one could argue. Yet, it is an average. Some 4 kilometres up the mountain the riders face a 800 metres stretch at 15% and along the way double digit sectors alternate with small drops. The last kilometre, for instance, starts on descent before the route ramps up to 7.5% in the last 200 metres.

There is only one side to ascend Lagos de Covadonga. Since the climb debuted in 1983 a string of renowned riders have won here, including Marino Lejaretta, Pedro Delgado, Laurent Jalabert and Luis Herrera. Two years ago Nairo Quintana climbed to victory on the beautiful slopes. 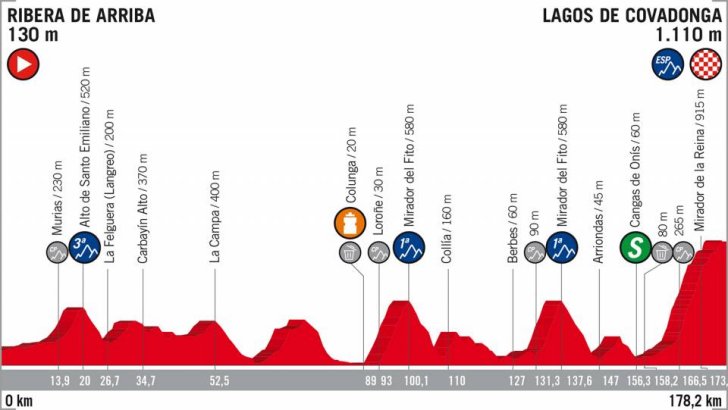 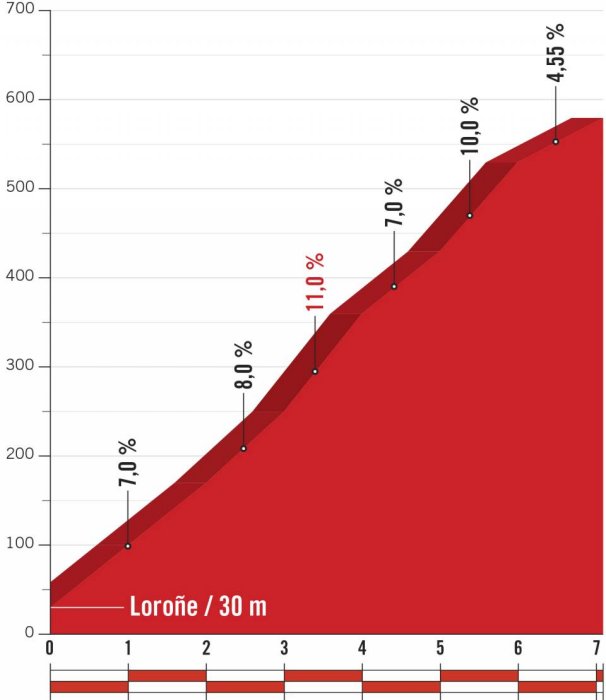 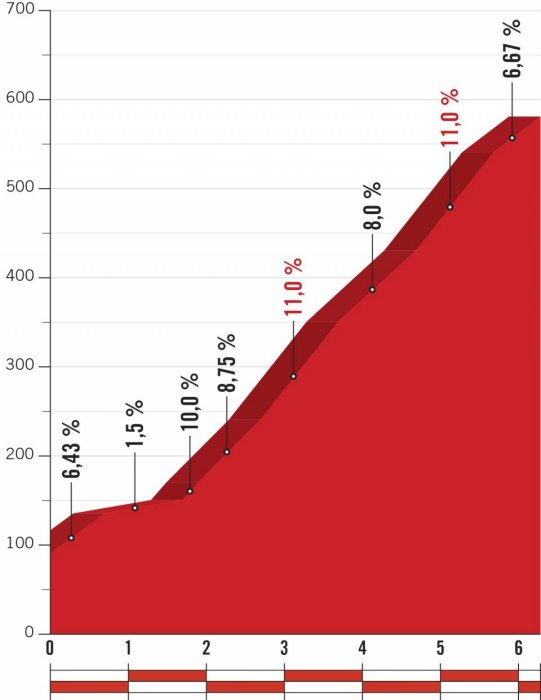 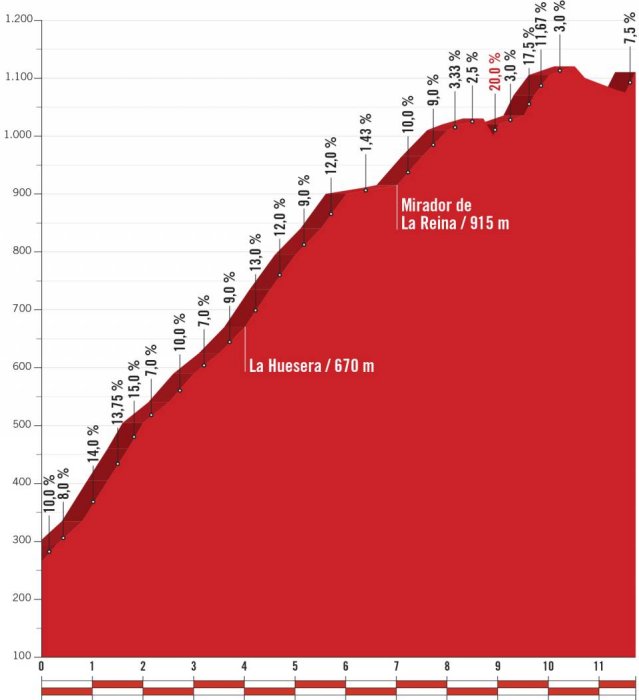 A Colombian win is expected.
I

Map of the stage -


Weather forecast - 24C max and strong chance of a shower or two.


Alexandre B. said:
A Colombian win is expected.
Click to expand...

Top 10 GC is covered by only 2 min 8 seconds and then there's Pinot, Kelderman & Aru, so one bad day and people can drop many spots on GC.
I

Thanks for the daily previews, really is a monster of a finishing climb, wonder will it be properly raced or will it be very late GC attacks from a 15-20 man group. Whats the total ascent for the day? if I had to guess it looks like over 4000m?

Superman
lopez
for
the
Win


Inquitus said:
Thanks for the daily previews, really is a monster of a finishing climb, wonder will it be properly raced or will it be very late GC attacks from a 15-20 man group. Whats the total ascent for the day? if I had to guess it looks like over 4000m?
Click to expand...

That is a somewhat misleading profile of Lagos, as the steepest kilometer is really La Huesera with 7k to go (which holds steeper max gradients than the 13% implied on the profile).

The stretch between km 1 and 2 after the Santuario also seems unusually steep, compared with other Altimetria profiles, that I know of.

MS and Movistar to play with each other let to break win and probably gift red to somebody who will lost it next mountain stage.
D

Break for the win?

Thanks again Robert for all these threads.

Break for the win.

If not the break then possibly either Yates or Valverde.
A


Koronin said:
Break for the win.

If not the break then possibly either Yates or Valverde.
Click to expand...

If a relatively high placed rider gets away will Michelton set tempo to protect jersey or simply relinquish it?

Koronin said:
Break for the win.

If not the break then possibly either Yates or Valverde.
Click to expand...

If a relatively high placed rider gets away will Michelton set tempo to protect jersey or simply relinquish it?
Click to expand...

Now there is a good question. They kept the break in check today (Movistar did) due to Kwait getting into the break. If someone does that tomorrow does M-S do it or do they expect Movistar to?

Quintana needs to attack on La Huesera and try to drop Yates, no matter if Lopez is with him or not. If he doesn't succeed he will ride in service of certain Don Alejandro Valverde for the rest of the race!

Oh, and I think break will take this.

Quintana needs to put Yates under pressure from far out. It doesn't matter if Lopéz is there or not.

If it all comes down together, Quintana will lose more time to Yates who is more dangerous in the TT than Lopez.

Valverde should try to anchor Yates if possible when Quintana has made his attack.

One of the hardest Covadonga stages I have seen which bodes well for the stage overall. I reckon Astana will try to control the stage since its a climb that suits Lopez very well. The winner? Basically a toss up between the 4 best riders.

I don't know who will control the stage. Break will likely get free reign, but so far every break has had people in it who were relatively close in the GC. Some very good climbers have systematically gone for the breakaways. Normally I'd say a breakaway needs around 3 minutes at the bottom, but climbers like Majka would have a shot with less than 2 minutes.

As for the favorites, Covadonga really tends to cause stop/start riding with groups shattering and regrouping. The easier late part of the climb might cause earlier attacks but it could also cause a sprint for the win if the break doesn't take it.

love the final climb
A

In Giro, Lopez conceded more than a minute to Simon Yates, so it should really be Astana who should be making the race hard.
M


Alexandre B. said:
A Colombian win is expected.
Click to expand...