Wednesday's stage after the ITT will see whom went too hard.

The race starts in Getxo to end after 157 kilometres in the saddle on a steep climb above Balcón de Bizkaia. The last 3.9 kilometres of the route is a toil at 11%.

Jonathan Castroviejo, the former European Champion time trialing who rides for Team Sky, lives in Getxo. Following the neutralized start the route continues to the proper start in Bilbao, near the Athletic Bilbao football stadium San Mamés. The riders head for the Alto de la Arboleda, a 6.9 kilometres climb at 5.2% with its peak at kilometre 16.7.

Following the descent the route is Spanish flat – which means the route is far from flat, yet there are no KOM points to be gained. For instance, the riders once again move through Bilbao (at kilometre 48) before they hit a 3 kilometres climb at 6.4%. Those eyeing up the polka dot jersey have to wait for the Alto de San Juan de Gaztelugatxe, a 4.2 kilometres climb at 6.3% that leads to a gorgeous sea view at the top. The San Juan de Gaztelugatxe is crested at kilometre 85.

The riders drop down to a section of some 20 kilometres on the flat. Still almost 50 kilometres out and five climbs to go. First the Balcón de Bizkaia, a 10.2 kilometres slope at 3.7%. A right-hand turn while going downhill would lead to the finish, but no, that would be too easy. A loop northeast of the arrival takes in the Alto de Santo Eufemia, a 3.8 kilometres climb at 6.1% with some double digits ramps early on, before continuing onto the foot of the Gontzegaraine, which slopes at 4% for 5.3 kilometres.

Where the descent meets the old route – in Munitibar – the riders turn left to climb back up to the Balcón de Bizkaia. The first 3.2 kilometres climb at 6 to 7% and when the route turns left, the ascent gets steeper. Actually, this is the road to the summit of Monte Oiz, but the route doesn’t go all the way to the top. The Oiz peaks at 1,026 metres while the finish lies at an elevation of 925 metres.

Getting closer to the line, the road conditions worsen. It’s merely a narrow corrugated concrete track with impossibly steep ramps up to almost 24%. The last 3.9 kilometres to the finish ride at 11%, while the final climb from Munitibar is a 7.1 kilometres toil with an average gradient of 9.1%. 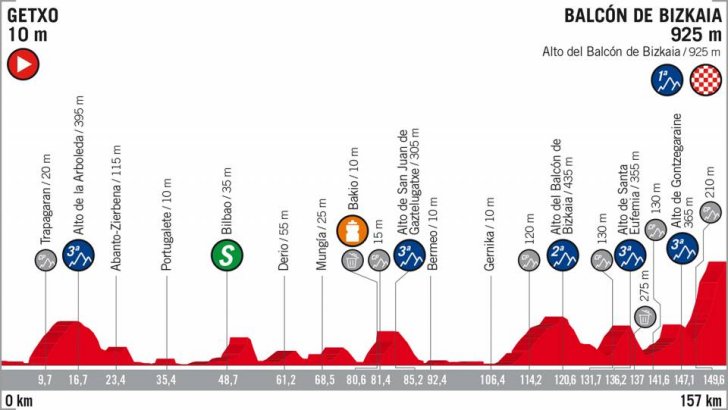 map of stage (looks like a bowl of spaghetti) 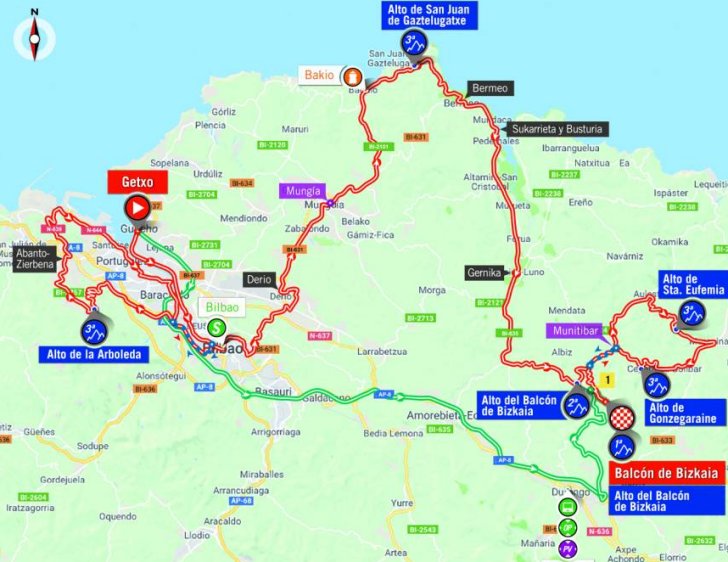 I'm very much looking forward to this one. Oiz is one of those climbs I wanted to see in racing action for years and now that finally becomes reality. This climb is so crazily irregular and full with steep ramps it's gonna be great. The only sad thing is that they can't climb all the way to the top for logistic reasons which means the super steep part is only 4 instead of 5 kilometers long.

Crushweak to crack everyone and get in red 10" ahead of Bala and Yates.

I am curious whether a break will be allowed much leeway. Those 10 bonus seconds for a win could make a difference for one of the GC guys. I guess it depends on who can get in the break, and who would have to ride in the peloton. Yes, I'm working part time as Captain Obvious.
I

I believe this is a more accurate profile of the last climb. They'll go up to 925m of altitude.

Balcón, you're saying... Must be a hell of a view.

Weather forecast for Bilbao is 28 C and partly cloudy. Looks like it gets windy on the final climb ...

If a team (LottoJumbo or Astana?) rides the last 30 km hard it could get interesting.

Only one man can stop Steven Crushweak from being victorious

Following yet another after-rest-day-mediocre-ITT, Tibopino finds himself, again, under the radar. Can he make it two?

Mas a surprise, SK really strong, the rest just about where I thought they would be. Ion and particularly Uran...not good. They may be tiring. At some point week-3, others may tire...This finish could reshuffle some of the cards.

If a breakaway - Michael Woods
If a GC day - Nairo Quintana.

I suspect it's a GC day for two reasons: (a) Bonus seconds are important and (b) Movistar and Astana have to make it tough early to have any chance of cracking Yates. No chance Yates cracks if they coast until the final climb.

Balcón de Bizkaia has great views down to the Urdaibai estuary and Gernika.

Monte Oiz is brutal. Ice&Fire's profile is the most accurate I think. The profile's over-stating of Gontzegaraigane made me think they were climbing Parriolaburu first but no such luck. The Vuelta has de-Basquified some of the climbs - "Santa Eufemia" is better known as Lekoitz-Gane, and was in País Vasco in 2014 when Contador won, in stage 5 and in the final day TT. As was Gontzegaraigane, in fact. Have to admit that I would have preferred a pass at San Kristobál and a descent to Durango or a finish on Urkiola after that, but it's good to finally see Monte Oiz in a bike race.

Since Mas got better every day I wouldn't look past him. And his home stages in Andorra are still to come.

Yates to win this stage before cracking on Friday and Saturday. If a break is allowed, I'll go with Oscar Rodriguez.

It's only 150 km to the last climb, so I'd expect it will be a fast stage and a long time for a breakaway to form. Pinot & Kruijswijk to go early and then we see what the others have left in the tank.
Yates to wheelsuck Quintana and yell every now and then, "Why don't you attack Nairo?!"

Today is the day the hype train will come back!

Lopez and Quintana will attack, but go nowhere, Mas to win the stage, Bala to finish ahead of Yates and take some bonus.
S


Red Rick said:
Only one man can stop Steven Crushweak from being victorious

Vincenzo Nibali will win this bike race
Click to expand...

unfortunately this doesnt really look like a stage that screams SK. It's like a PV Hilly stage. Too explosive. Will lose 10-20 seconds to Q/Lopez/Yates at least, probably Valv as well. :geek:
D

Break will try, who knows whether they will succeed. This is the day to try though.

Ambush has a shot as well.

MAL to launch an attack of no return...

Unless somone not too far in GC gets in the break, I don't think there's a team who wants to control the stage.
Perhaps Jumbo could do it, but DT is right on Kruijswijk not being at his best on these hills.

If Lopez and Quintana gets a gap to Yates, are they going to work together to take time on him?


Lexman said:
MAL to launch an attack of no return...
Click to expand...

If Lopez keeps laming I'm gonna be so done with him.
C


Red Rick said:
Only one man can stop Steven Crushweak from being victorious
Vincenzo Nibali will win this bike race
Click to expand...

Nibali is only 1:39 down on GC, still seems eminently possible. In my fantasy-cycling contest for the Vuelta I chose Nibali as one of my GC guys, I was liking the Shark