Vitoria-Gasteiz
It has been over 60 years since a La Vuelta stage first departed from Vitoria-Gasteiz. These avenues, though modernised, have remained almost intact over the decades. The excellent preservation work that has been carried out in its iconic medieval city centre has made Vitoria-Gasteiz a must-see destination for history lovers. Its history is also linked to cycling, as its cobblestone streets are the birthplace of Igor González de Galeano, La Vuelta podium (1999), who also wore the yellow jersey i the Tour de France for an entire week, in 2002.


Villanueva de Valdegovia
Villanueva de Valdegovía is a small rural Basque town with a very particular feature that attracts the attention of all who visit it: the Varona Tower. This historical complex, made up of a palace and a defensive tower, is considered the best-preserved medieval fortress in the Álava territory. Following the passing through of the World Tour peloton in 2018, during the Tour of the Basque Country, its tower is now getting ready to leap to the grand stage with La Vuelta.


On Orduña
Reactions: Carols, JosefK, Jungle Cycle and 7 others
A

Anyone have a profile on the lump after the Orduna?
F

Not expecting much from GC. Of course that doesn't preclude a good stage.
C

Amazinmets87 said:
Anyone have a profile on the lump after the Orduna?
Click to expand...

I do not have a profile, but if you look at topographic maps, it is around 2.4 km with 3%. Could be a little steeper at the beginning.

With that climb and the wind I think we'll see GC action. This race is looking less likely to finish by the day, they won't leave any chances on the table.

will-10 said:
With that climb and the wind I think we'll see GC action. This race is looking less likely to finish by the day, they won't leave any chances on the table.
Click to expand...

could more be the opposite because of the wind today, as it's a strong headwind on the final climb (and descent)

search said:
could more be the opposite because of the wind today, as it's a strong headwind on the final climb (and descent)
Click to expand...

Then we could see echalons in the terrain between the climbs. It should be a cross-tail wind there.

This wouldn't be great in the Tour (or this Giro for that matter) but it should be fun.
B

I think we'll see some GC action. The Orduña climb surely will see a few riders gapped -- looks like the meat of the climb is 6 km at around 8 percent.
I

This is just like S. Miguel de Aralar on a smaller scale. GC men drop most of the rest but get together to the finish. Is that what you call GC action?

We'll see something imo, the race has been too open until now.

Movistar should try send Soler up the road again at least which will probably force some kind of action as teams can't keep letting him just roll off the front.

Behind that there's a whole bunch of riders who clearly think they can get back into this too if no team is taking real control of the race, so wouldn't be at all surprised to see riders like Henao, Martin, Gaudu etc trying to skip clear again which could drag a few others out to play.

Then riders like Grosschartner and Chaves will take an opportunity on the final climb if the legs feel good as they might be given enough space to get clear if the others were to look at each other.

And lastly Carapaz continually shows that if his legs feel good he will attack so I'd not be shocked if he decided to see whether he can make Roglic work today before something more decisive tomorrow.
Last edited: Oct 27, 2020
Reactions: gregrowlerson

Philosopher Martin will probably give it a go once more to secure a 11th place finish in the GC.
Reactions: Sandisfan

Samu Cuenca said:
Philosopher Martin will probably give it a go once more to secure a 11th place finish in the GC.
Click to expand...

he said he is going for stages and (potentially) the mountain jersey, and enjoys this new role, not having to care about GC
Reactions: Sandisfan

search said:
he said he is going for stages and (potentially) the mountain jersey, and enjoys this new role, not having to care about GC
Click to expand...

Exactly what a man hell bent on scratching his way back to 11th would say to fly under the radar ¬_¬
Reactions: Sandisfan, gregrowlerson and Samu Cuenca
R

A lot of the race will have a side wind. Wonder if some echelons may form in between the climbs. In Movistar shoes i would try to put someone a bit bigger like Erviti or/and Oliveira (even if Soler himself is quite high) to be there on the flat run-in to the finish which will have a headwind and attack with Soler on Orduña and see what happens. If someone like Roglič has trouble and there's help from other 2ndary GC teams like Bora or Michelton then go deep to the finish as the time splits between the groups should be significant. The main problem is that the next stage ends on a hard climb and there's plenty of oppurtunity (Angrilu) to shake up the game. This stage should have been a part of the 3rd week tricky tests that Vuelta does every two years. 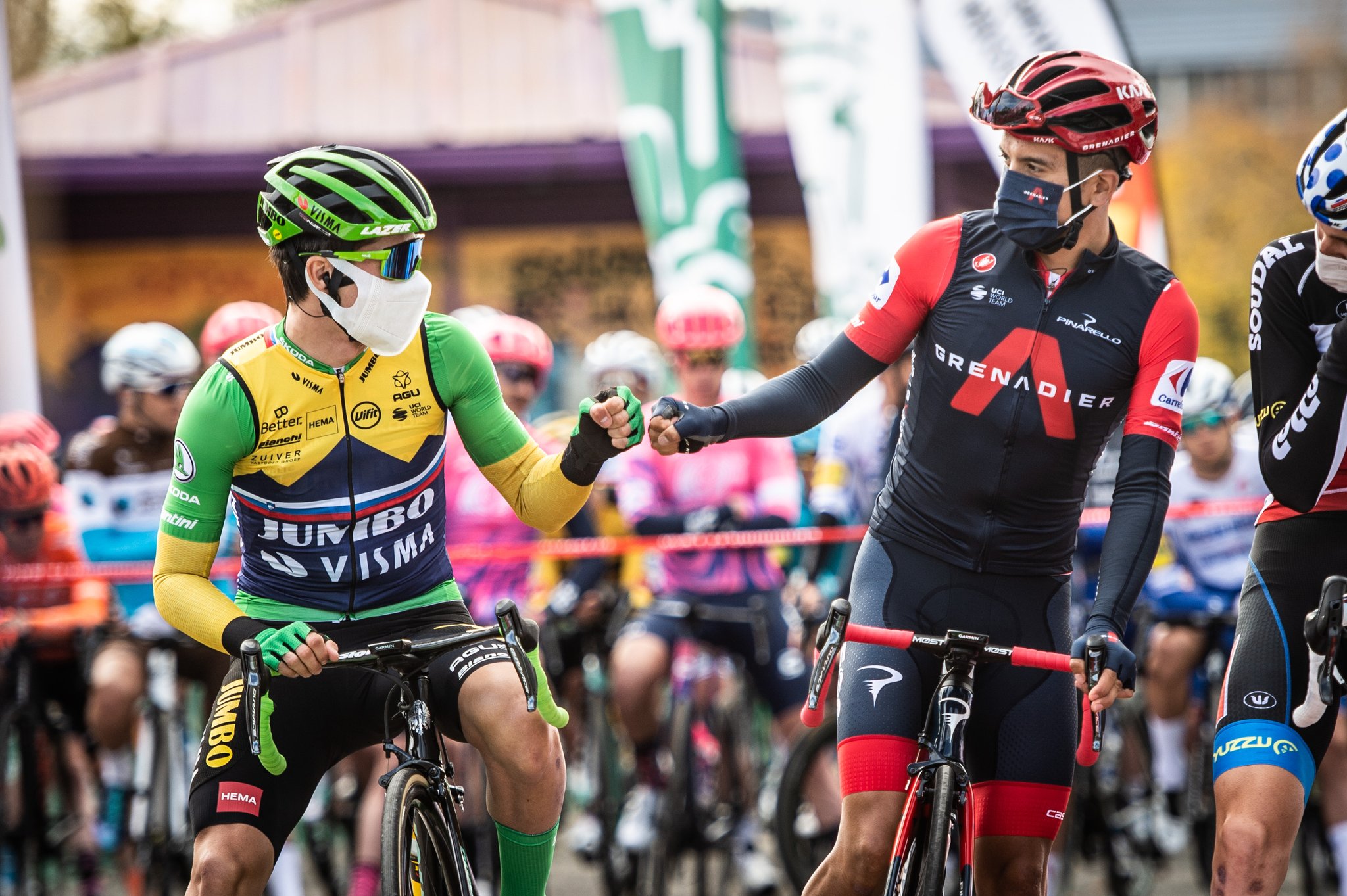 There is a lot of wind but nothing is yet happening.
Reactions: Sandisfan
Z

Break not settled yet, there’s a sizeable group trying to bridge
Reactions: Sandisfan

Big 2nd group
Froomy will have to work today
Reactions: Sandisfan and TourOfSardinia