I found the article announcing the 50 most influential people in cycling today puzzling. I know you must be struggling for content in this time of "no races happening," but this article reminded me of the gimiks used on the web to get browsers to view gross amounts of advertising. All of us have our favorites that weren't included in your list and I understand that is simply a matter of preference and opinion. However, I want to take issue with two names that were included that reflect negatively on the ethics of those who run the governing bodies. Veronica Ivy's inclusion on this list hints that professional cycling is becoming more interested in social engineering than sport. It also sends a message that women's sports are not really important and do not need to be protected from hijackers. Biology is biology, science is science, and to declare that how one identifies can change scientific fact is illogical and leads dangerous and harmful outcomes. If the UCI is bent on pursuing this experiment, simply start yet another organization and race schedule for transgender men and women. See how well that gets supported. Since I'm sure part of this is driven by "inclusion" concerns, I can't help but wonder where are the black faces in the peleton? Professional cycling is light-years behind other sports in the area of racial inclusion and there is certainly no biological reason to exclude them since they excel in almost every sport known to humanity. Where are the programs to develop teams from Africa, other than white riders from South Africa?

Secondly, how can you completely annihilate Lance Armstrong for being the most egregious cheat in the history of the sport, strip him of everything he ever won, and then include him on this list? If he does remain one of the most powerful and influential people in cycling, it is because you have allowed it. The documentary, 30 for 30, aired recently in the United States revealed his character from his own lips, and it was an ugly portrait. His actions set cycling in this country back 20 years. Why does the media insist on giving him visability? Why do I see his name on cyclingnews.com frequently?

There are so many names that could have been included on this list that were not. They may not be as colorful or controversial, but they have had a positive influence on the sport.
B

Where the hell is Lefevre in that list, lol. 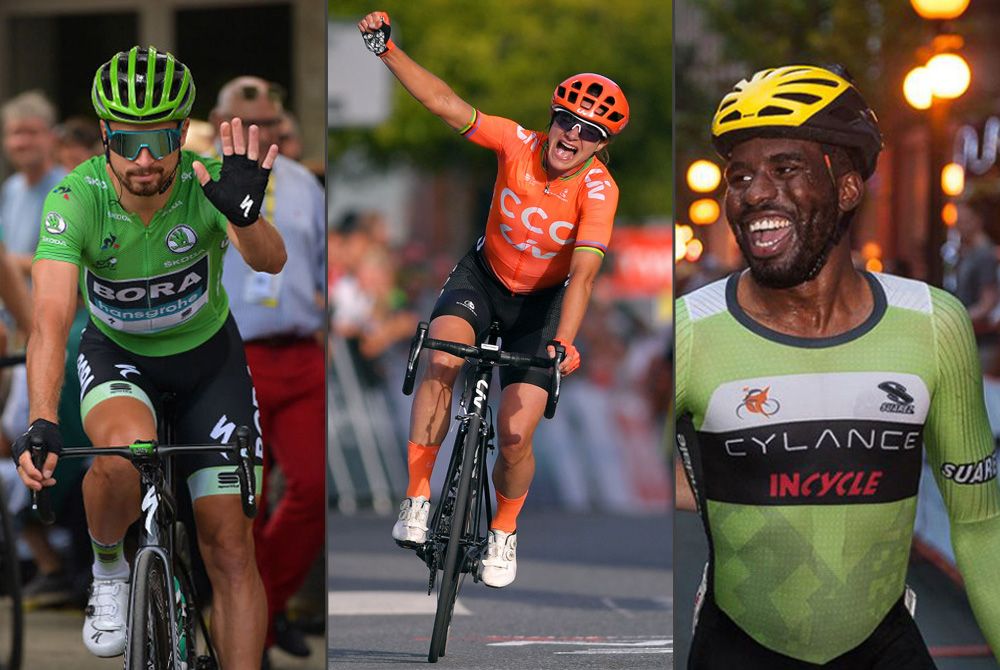 The Power List: The 50 most influential people in cycling

The riders, managers, agents, and stakeholders who pull the strings of the sport

And no Christophe Laporte?
Reactions: Wvv, SafeBet, Jungle Cycle and 4 others
F

Lol @ the Bahrain owner being on the list. Apparently cyclingnews thinks it is ok to whitewash the dictatorial Bahrain regime.

I'm trying to figure out how you put that list together and not include in Unzue. He put what is now Movistar together in the 1970's and took them World Tour in 1980. He's run and owned that team for 40 years at the top level. How exactly does he get left off the list?
Reactions: Wvv, Big Doopie and hayneplane

Actually I can't really say much about the matter, as the article was so unreadable for technical reasons that all I got were a view glimpses. I was so annoyed I stopped trying to make it work. (I know, that's not the place here, but hey, if anybody cares, your new website is a mess, guys, on my laptop and on my phone...)
Okay, but one thing I read nonetheless: They state it's a list about how it is, not how they wish it was. And while it seems they are being very inconsistent with this motto, it does make sense in regard to Armstrong and riders of colour. Because that's how it is: Armstrong is still there, a demon above the world of cycling, one of the guys people think about when thinking of cycling. And there are hardly any non-white riders on WT level, for whatever reasons. That's annoying, but not really cyclingnews' fault (unlike their website).
V

Yeah really terrible list. Bernal is a great rider but Bernal at 6 with no Unzue, no Contador, no Nibali, no Valverde is just bizarre.
Reactions: Koronin

Lefevere missing is the weirdest thing of all.

tobydawq said:
Lefevere missing is the weirdest thing of all.

Laporte has stated he didn't wish to overshadow and take away from the other individuals listed. Very noble of him and in his position why do that, we all know how good he is.
Reactions: SafeBet and tobydawq

Somehow I suspect those of us on his board could put together a much better list.

Koronin said:
Somehow I suspect those of us on his board could put together a much better list.
Click to expand...

My thought was more of a collaborative list then each of us doing an individual one.
Reactions: SHAD0W93

Nibali is also not on the list. I guess the author of the article doesn't subscribe to the voodoo conspiracy.

Koronin said:
My thought was more of a collaborative list then each of us doing an individual one.
Click to expand...

Oh collabs are good. Bring us together in these times. We could all do 10 or so and use the most picked. Maybe 20 would be a good number and more variety in who's picked.
Reactions: Koronin

are registered, I'd say. I'm even raising the required number, okay? 25 more names everyone.

BlueRoads said:
Good idea, so let's do it.

are registered, I'd say. I'm even raising the required number, okay? 25 more names everyone.
Click to expand...

Influential could mean within the cycling world, but also towards the outside world, politics, but also attracting young riders (by settings an example). In that sense great champions should be on the list... but if you start with that, your list will soon be too short. But i'd even consider putting a guy like Graeme Obree on the list. From what i remember as a kid, he was one of the first to really get into aerodynamics and spur some sort of revolution regarding aero positions and bikes, which was quickly followed (and improved) by others.

Influential can mean a lot of things. However, I suspect the majority (if not all) of us can agree that Unzue and Lefevre should be on the list.

Koronin said:
Influential can mean a lot of things. However, I suspect the majority (if not all) of us can agree that Unzue and Lefevre should be on the list.
Click to expand...

Obviously. I mentioned Lefevre in the first reply to the topic.
Reactions: Koronin

He's so influential that apparently nobody knows how to spell his name
Reactions: SHAD0W93, BlueRoads and Logic-is-your-friend

I would include those that have formed and form the world of cycling as we know it as stand-out individuals. People who have brought major changes and those, who are able to change and do actually affect the way we see cycling and the way it happens. Riders, organizers, technicians, sugar-daddies with interest in cycling, doctors, journalists. In my opinion there are not that many journalists that form our opinion, though, as one would imagine.
It seems the article on the front page has emphasized people who influence now and did not care much about what people have done in the past. (So it would not be Armstrong as a winner or a doper but as the media-person he is today?) But as I said before I did not really read the article... Anyway I would include the people who have shaped cycling if they still have a major effect on what is happening in the cycling world today.

For me those I would include on a list of most influential people in cycling would be:
Unzue
Leferve
Merckx
Hinault
Lemond
Valverde/Contador (I'd put them together. They have inspired a young Spanish kids to ride and race. They also both have their own teams to develop Spanish cyclists. Plus they are part of the Golden Era of Spanish cycling. Yes there individual for each as well.)
Indurian
Sean Kelly
Cancellara
Sagan
Nibali
Van der Breggen

SafeBet said:
He's so influential that apparently nobody knows how to spell his name
Click to expand...

Do I count for nobody?

Maybe Cecilie Uttrup Ludwig could enter in this discussion. With all her charming and loveable craziness, she sure does draw quite a bit of attention to women's cycling.
Reactions: Koronin

The problem with some of those is do you include them for the influence they have already had, or the influence they will have? For example, there's the Zwift founder on the list - Zwift is obviously a major success in terms of virtual racing, but that was its own minority interest club, and it's only because of being thrust into the limelight by circumstance in 2020 that many of us have come to view virtual racing. And I'm sure a good number of people will have been intrigued by it because whether or not they want to watch it, it could well be something that is fun to participate in. Likewise, on the mentioning of various people who are active within the péloton for what they do, I think - and I know I'm biased, before anybody says - but Cecilie Uttrup Ludwig could well be worth a mention. She has been publicly calling out the UCI for the ongoing divide in parcours between men and women which is paradoxically growing larger as women's cycling developed (back ten years ago the women used the same World Championships courses as the men, just fewer laps, whereas now they're increasingly finding the key-note obstacles off-limits to them) and writing and engaging people on the subject. And being somebody who has the kind of charisma to burn that she has, attracting fans with her interviews and off-bike shenanigans as well as enthusing people on the bike with her aggressive racing style, means that it being her that's calling out the UCI and race organisers more likely to catch on than if it is some random domestique. Annemiek also holds a lot of sway for that, having a good fanbase of her own personally, better contacts with the men's péloton than the majority of the women, and also having prominently and publicly complained about not having hard enough race routes. Annemiek was on the list and I think justifiably so, but while it's early days I think if she continues to be as engaging and as likable as she has been to date, and continues to bang the drum for women's racing, Cille could definitely at least become somebody who deserves a place on this list.

Edit: ha! Toby posted that while I was writing this up!
Reactions: tobydawq and Koronin

tobydawq said:
Do I count for nobody?

Maybe Cecilie Uttrup Ludwig could enter in this discussion. With all her charming and loveable craziness, she sure does draw quite a bit of attention to women's cycling.
Click to expand...

I definitely messed up the name that type. I have enough problems spelling in English.