I have a hard time judging how good this route is by the profiles, but I don't like the final stage. I like the 2016-stage much better when the finishing climb was the penultimate or 3rd last climb, that made for some really good racing. But I guess its definitely a better route that last year's which was pretty tragic tbh.

Landa or Ion ftw, I really hope a Basque finally wins again. Also, look at these past 10 year's winners!

Also, whats up with the name?
J

There has been a rebranding, with the help of the Basque Country turism office, it can easily be noticed in the stages info that includes tourism information about each town.

The first stage has a quite interesting end, with Aia (not the hardest side) and then the new climb of Elkano, 2,4km at more than 9% and a first km around 12% they will be riding along the coast, so helicopter images of the coastline should be expected

The second stage will be harder, the end is a constant up and down along the coast, with the last climb of San Pelaio, the start of the climb is through a very narrow and rough road and then 3,4km at 8,3%, this route has been choosen to show San Juan de Gaztelugatxe, it's next to the last climb. Another interesting point will be a small uphill road of 11% at just 400m from the finish line

The 4th stage will be harder than the 5th IMO, Endoia and Azurki are a good combination of climbs

I wish they'd swap stages 5 and 6 around though, the Endoia-Azurki combo to finish the race after the Arrate MTF would be a much better way I think.
T

The one posted in this thread is already the new one, the first one had the Jata climb just before San Pelayo
T

The one posted in this thread is already the new one, the first one had the Jata climb just before San Pelayo
Click to expand...

yes, the profile is, but the distance 152.7km that is given is wrong, as can be seen on that profile...

The one posted in this thread is already the new one, the first one had the Jata climb just before San Pelayo
Click to expand...

yes, the profile is, but the distance 152.7km that is given is wrong, as can be seen on that profile...
Click to expand...

True, didn't catch that, you are right, sorry!

Bump. This race is starting tomorrow!
Maybe nobody cares!

Wtf, they changed the name to Itzulia Basque Country?

Should be a good one.

Curious if we'll get images tomorrow of Nibali at the back of peloton regretting his life decisions.


Red Rick said:
Should be a good one.

Curious if we'll get images tomorrow of Nibali at the back of peloton regretting his life decisions.
Click to expand...

If Kwiatkowski joins him, maybe they can regret together

Yep Quintana did not appear happy about working for Valverde at Catalonia, so this is going to be even more contentious. Plus a preview of both Tour de Suisse and Tour de France. I think I'm going to need more popcorn and maybe some wine as well.

Also going to go with whoever wins this will not be a rider from Movistar.

Many riders to watch in this race. Many big names haven't performed very well so far this year, like Porte, Zakarin or Spilak and will finally want to get a good result, while I'm just personally interested how Mas will perform, and ofc the Movistar duel could turn out quite entertaining as well. I'm looking forward to it. There couldn't really be a better race to bridge the gap from the ronde to Paris Roubaix.
T

Does anyone know how Alaphilippe is approaching this? Just a rehearsal for the Ardennes or something more serious? If he's here to give it 100% then this profile for Stage 1 is absolutely ideal.

Well, if QS or Valverde don't win, it'll be a first this year. One of the Yates maybe or Uran as an ouside chance to a Movistar win.
A

Nah, he will lose tons of time on ITT, unfortunately.

There was a race without ITT this year and it was Catalunya but he fell ill right before that race.

Flat time trial must make the Izagirre brothers the favorite - They could take a minute plus off some GC contenders.

A rose by any other name would smell as sweet.


yaco said:
Flat time trial must make the Izagirre brothers the favorite - They could take a minute plus off some GC contenders.
Click to expand...

Porte will have something to say about that.

Profiles for the key climbs: 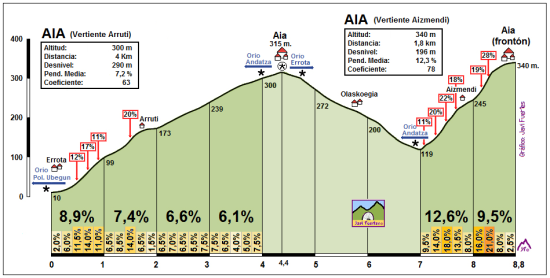 Frustratingly, nobody’s mapped this side of Elkano other than the official route book, but the descent via Meaga is mapped. The neighbouring Urdaneta climb is mapped but not Elkano from Zarautz. Looks like a killer, and should be a beauty, the coast around Zumaia and Zarautz is wonderfully scenic with the mountains rising straight out of the sea. 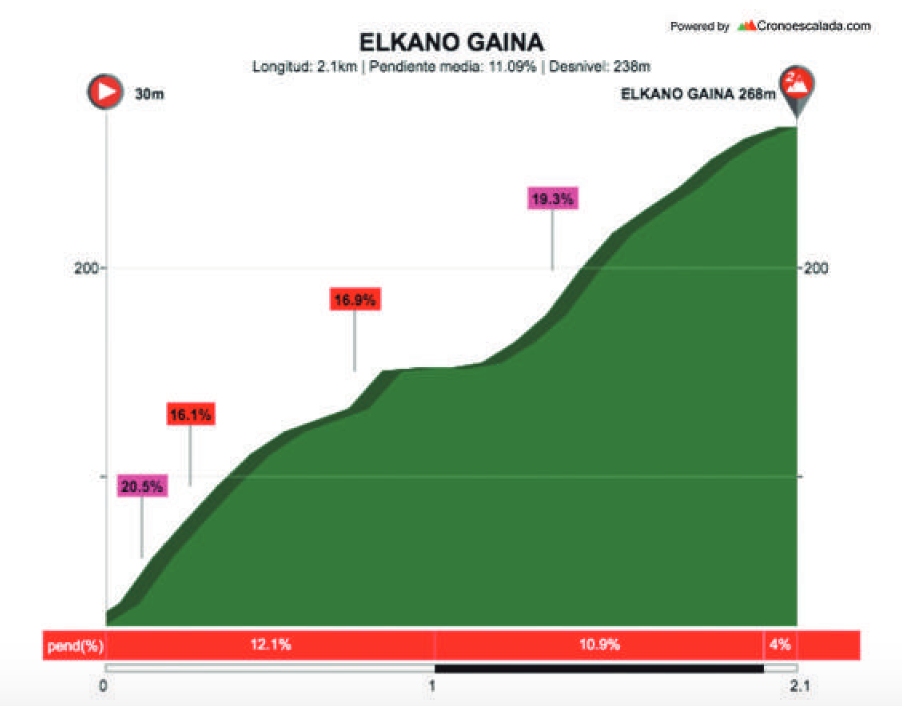 Debatable as to whether this or the Artike side is the toughest side of the classic Sollube climb. They move on to one of my very favourite Basque towns, Bermeo is a real beauty, nestled in the Urdaibai estuary which houses my favourites from the estropadak, and with Monte Sollube overlooking it.

It looks like with the attempt to ensure good shots of San Juan de Gaztelugatxe (a worthwhile sight in the area even if, like me, there is nothing you could possibly care less about than Game of Thrones) they’re going along the old northern road to San Pelaio, which is steeper and less consistent, so should be more selective.

Not much reason to care about this other than that it would be way cooler if they went over the classic Puerto de Orduña, which would result in a brief detour into Burgos and take us directly to the same finishing town as well as offering views of the Salto del Nervión, one of País Vasco’s best natural wonders, as well as being a harder climb with much more history. I have about 15 País Vasco routes stored up for use at various times in the Race Design Thread, the fact is there’s only so much that can still be discovered there however, but I’ve had a couple with an MTF across the Burgos border at Salto del Nervión parking immediately after Orduña. Anyways, this is the stage intended for the sprinters with the rolling outcomes, but as ever it’s País Vasco so there are few real sprinters on the startles - there’s the likes of Rojas and Albasini, sure, but this might be a good chance for the wildcard teams to get a good placement with the likes of Edu Prades or Nelson Soto. Realistically Michael Matthews will win.

About as flat a TT as we’ve ever seen in País Vasco, makes the overlong Güeñes TTs look like the Eibar-Arrate-Eibar or Oñati TTs.

I just wish they’d put Erdoitza between the climbs to improve connectivity, or put the Arrate MTF before this stage, because this finale is otherwise excellent.

Personally I wish they’d not always come back via Urkaregi as it stifles earlier moves, and while I appreciate that the classic side of Arrate had become too predictable as everybody knew when to make the moves, I’d be interested in what would happen if they’d have the first climb be via the Matxaria side and then the second climb to the MTF being on the classic side, but if instead of Urkaregi they instead went the other way from Markina-Xemein to Ziortza and climbed Muniozguren, the descent of which then would be through Trabakua, so essentially doing the first 10km of the real life stage in reverse, and then climbing the classic side of Arrate.

This is a beautiful race. The nature is stunning. I have ridden the Jaizkibel, very steady. I think the action will be on the steeper climbs. I hope we will se some action.