It's a very busy week with four stage races going on at the same time, but this still deserves attention.

Stage 1: Cazouls-lès-Béziers - Lacaune-les-Bains, 156.5k
The kind of Massif Central stage that isn't hard enough for the climbers. Maybe FDJ will try to control this for Démare; if not, we may get a scenario like 2017 where the breakaway gets handed a lot of time and it ends up deciding the GC.

Final 15k, not the most sprinter-friendly but also not steep: 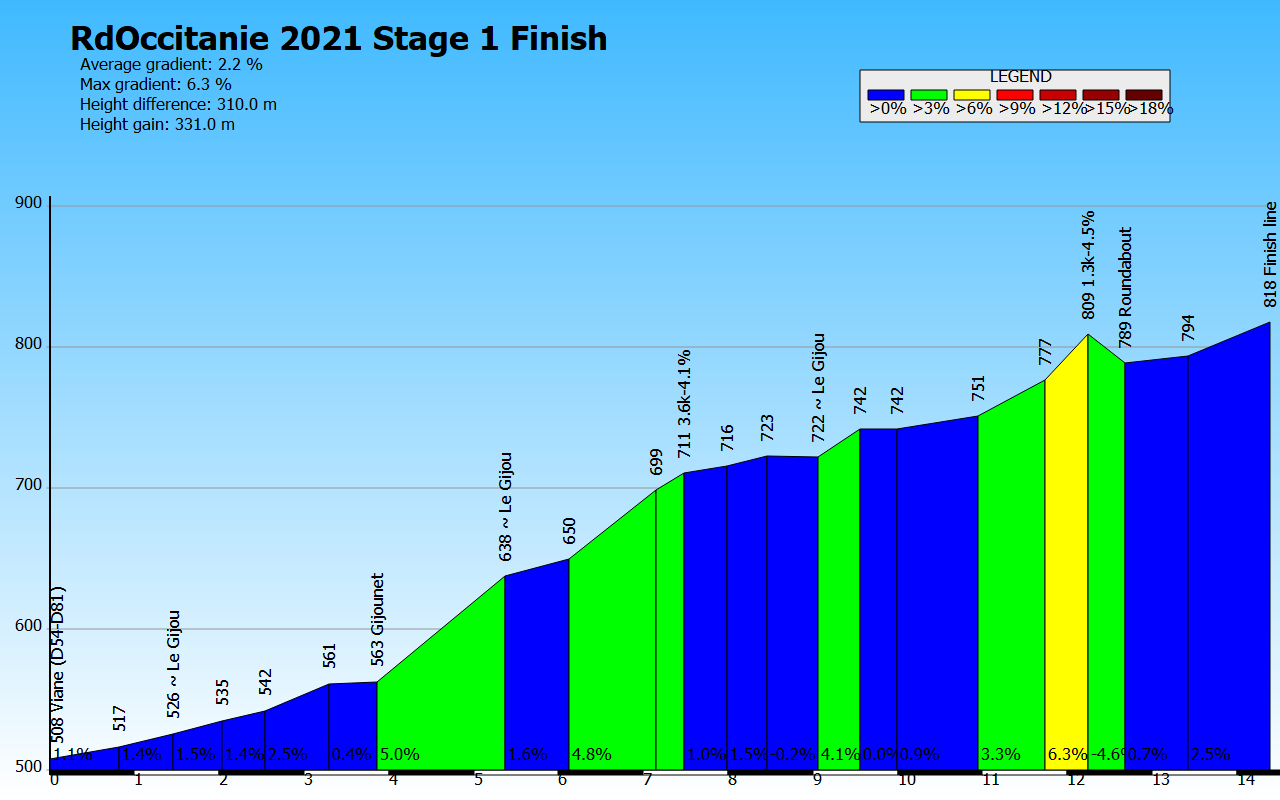 Stage 2: Villefranche-de-Rouergue - Auch, 198.7k
The flattest stage of the bunch. However, the final kilometer features quite a few tight curves with the final 600 meters at roughly 6%, including a section of 140 meters at 10% that comes from 400 until 260 meters to go. I believe it's a repeat of this stage in the 2015 edition, won by Steven Tronet.

Stage 3: Pierrefitte-Nestalas - Le Mourtis, 191.8k
Queen stage that's all about the easier (but still pretty difficult) side of Mourtis (which is basically Col de Menté with an extra ramp at the end). The GC battle won't end here, though. 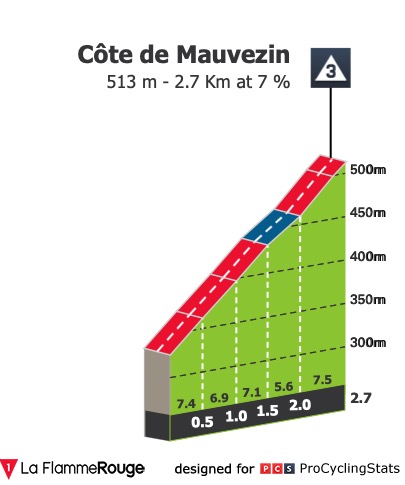 Stage 4: Lavelanet - Pays d'Olmes - Duilhac-sous-Peyrepertuse, 151.2k
Unusually for this race, the final stage is also an MTF. The only downside is that it's a garage ramp.

Got an error message when I tried to post the first time, tried again and this is what the forum software's done, oh well.

Apparently the official website resists hotlinking. I've got the maps and profiles up from a different site in this thread so if a moderator would be so kind to remove the other duplicate...
Reactions: Sandisfan

Wow... Would love if the Tour de France could use finishes like this.... or some of the uphill finishes from Paris Nice or Mont Faron... very interesting race
Reactions: Sandisfan
S

Probably the easiest route for this race in a while?
Reactions: SafeBet
Y

The organisers need to leave a stage or two for Demare.

Though, I dunno if the feed will just start, or you'll have to do something...
N

Scarponi said:
Probably the easiest route for this race in a while?
Click to expand...

This race design was absolutely great around 10 years ago but then has started to become worse every year.
Reactions: Sandisfan

Why do Trek start with such small teams nowadays? Is it about the covid-bubbles?
Reactions: Sandisfan
W

BlueRoads said:
Why do Trek start with such small teams nowadays? Is it about the covid-bubbles?
Click to expand...

It's harder to sub guys in at short notice at the moment with less flights etc. if someone is sick.
Plus they're running triple-program with Suisse/Occitanie/Belgium so perhaps less options available if someone does drop out pre-race.


Nirvana said:
This race design was absolutely great around 10 years ago but then has started to become worse every year.
Click to expand...

This is the one that sticks in my mind:

Nirvana said:
This race design was absolutely great around 10 years ago but then has started to become worse every year.
Click to expand...

Seems to be a side effect of the administrative reform of France.
Reactions: Sandisfan
N

will-10 said:
This is the one that sticks in my mind:

IMHO the best stage was the 2008 one with the Tourmalet at the start and a finish sequence of Val Louron, Peyresourde and Superbagneres (i always wonder if we'll ever see again Superbagneres in a race...).
Reactions: Sandisfan and will-10

Not so fresh, huh?

And now for the big question: What happened to Demare?
Reactions: Sandisfan

Not so fresh, huh?

And now for the big question: What happened to Demare?
Click to expand...

He lost 15:49, but you wouldn't have expected him to be in the front group on this stage anyway.
Reactions: Sandisfan

Samu Cuenca said:
He lost 15:49, but you wouldn't have expected him to be in the front group on this stage anyway.
Click to expand...

Guess I put too much faith in the preview on Feltet.dk...

RedheadDane said:
Guess I put too much faith in the preview on Feltet.dk...
Click to expand...

I was purely judging it by the guys that actually made the group, and only the best climbing sprinters in Vendrame, Cort and Swift (if you can even regard him as a sprinter these days) were in there.
Last edited: Jun 10, 2021
Reactions: Sandisfan

That was probably the worst broadcasted sprint I've ever seen with the feed cutting out first and then focusing on fourth placed Manzin Démare won it with ease ahead of Aular and Mosca, Groupama bossed the leadout.

Brambilla has gone solo from the break. Under 2 Ks to go.
No clue how far behind the others are.

Cort caught him, left him - and the camera moto - behind in the last few 100 metres, and took the win. Much as I like it when the Danes win, I feel bad for Brambilla.
Pedrero won the overall.
Reactions: Sandisfan