Page 11 - Get up to date with the latest news, scores & standings from the Cycling News Community.
Sidebar Sidebar
Previous Next

In fact in 1979, Hinault won the TT to Superbagneres, a breakaway, a flat TT, and the sprint on the Champs.
Reactions: Sandisfan, jmdirt, Big Doopie and 2 others

ChewbaccaDefense said:
This! They had the ability to address the win 2 days ago, and were too concentrated on the storybook ending. Well, the best books are the ones that flip the script.
Click to expand...

Yep. The team as a whole hit 25% of the four stage wins. They got cocky, believed their hype despite the signs that they can lose and are not all that, back a little, boxed in, and WVA with a huge sprint after his big TT.
Reactions: Sandisfan and ChewbaccaDefense

perico said:
For all the talk about Merckx, a lot of people seem to forget the other most dominant rider in cycling history and just how good Bernard Hinault was, and that he won the Champs stage 2 times.
Click to expand... 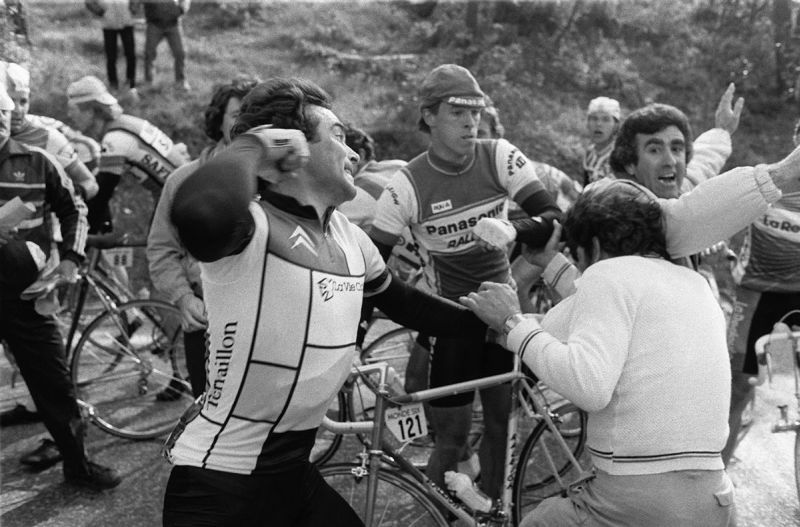 Reactions: Oliver, SHAD0W93, Sandisfan and 9 others

More people on the podium for the green jersey, the for the other three jerseys combined!
Reactions: jmdirt, SarahtheDane and Bonimenier

I like how Wout makes his bike throw 15 metres past the line...
Reactions: Sandisfan, jmdirt, SarahtheDane and 1 other person

burning said:
I am curious who is the last rider to win a mountain, sprint, and time trial stage in a GT?
Click to expand...

Hushovd did all in his career although not all in same year.
Reactions: Sandisfan, jmdirt and search
T

No French winner in 36 years.

Pogacar absolutely dominant, some would say there is little hope for the next 10 years.

But maybe not... it's like when the protagonist hasn't been seen all season, and returns amidst mass chaos to restore order. 2022. Get Hyped.

Cav should have taken his mask off..
Reactions: Andy262 and SarahtheDane

Carapaz got dropped getting onto the podium.
To be fair; he had to bring a quite a crowd.
Reactions: Sandisfan

perico said:
For all the talk about Merckx, a lot of people seem to forget the other most dominant rider in cycling history and just how good Bernard Hinault was, and that he won the Champs stage 2 times.
Click to expand...

Now there is a guy worthy to mention in the same sentence with Eddy!
Reactions: Sandisfan and perico
D

I think Contador does....
Reactions: mortand, Sandisfan, Roku and 3 others
S

Is it just me, or did it look like Vingegaard's baby just tried to kick Pogacar?
Reactions: Carrick-On-Seine, Wvv, Sandisfan and 3 others
M

Who the fk lifted that Denmark flag not up top in the flag pole but left sloppy shoud get a fist bump..
Reactions: Sandisfan and SarahtheDane

SarahtheDane said:
Is it just me, or did it look like Vingegaard's baby just tried to kick Pogacar?
Click to expand...

Not just you!
"Oh, I'm gonna make sure I'm getting no competition from your gene-pool when my time comes! "
Reactions: Wvv, Sandisfan, Bolder and 3 others

Leinster said:
Nice touch the 3 Slovenians on the front holding up Roglic’s number.
Click to expand...

I can't stand it he's not dead ffs. Almost as bad as the Brazil soccer players and their Neymar jersey
Reactions: jmdirt, Eeslliw, kingjr and 2 others

If someone had told me three weeks ago that the final podium of the TdF would be Tadej Pogacar, a Jumbo-rider, and an Ineos-rider, I... would probably have believed them.
If they'd then proceeded to tell me that the Jumbo-rider would be Jonas Vingegaard, I would've looked at them like they'd eated little blue nails!
Carapaz being the Ineos-rider is more expected.
Reactions: JosefK, Sandisfan and jmdirt
K

Wow, congrats to Van Aert on his incredible feat. Ventoux stage, flat ITT stage and Champs-Elysees sprint ahead of Cav. What a legend! There hasn't been such a versatile cyclist in the 21st century. Guys from other sports should be lucky that Vout hasn't tried their disciplines yet. During the Olympics he may fancy a new discipline though (maybe decathlon to avoid boredom?)

The race is over. Congrats to Pogacar on defending his crown. He did it in a spectacular style: the way he crushed his rivals in the Alps was legendary, they even feared following him the next day (Tignes) to avoid another beatdown (as Mas said). One TdF victory is difficult but defending it even more so (especially mentally), only the greatest cyclists managed to do it. And he did it while still being only 22! Youngest double TdF champion in history. This phenom is not going anywhere, we are in for Pogacar era.
Reactions: JosefK, Sandisfan, Nick2413 and 1 other person

Breezy1985 said:
I can't stand it he's not dead ffs. Almost as bad as the Brazil soccer players and their Neymar jersey
Click to expand...

With the rise of Vingegaard he could be dead man walking...

Joking aside, I agree it seemed a bit excessive, considering his injurys don't appear to be major. But it was also a nice and unharmful gesture.
Reactions: Sandisfan, gunara, jmdirt and 1 other person
A

titan31 said:
If WVA is allowed focus on stage wins, he'll probably take the record himself. 5 in 2 years now and he can win on any stage.
Click to expand...

Far easier to break the record as a one dimensional but elite sprinter than a versatile rider.
Reactions: Sandisfan and Eeslliw
D

Wanted Cav to win. But the Van Aert triple is pretty great. Max respect to these cyclists who can excel in multiple situations.
Reactions: FroomeWagon and jmdirt

dgodave said:
Wanted Cav to win. But the Van Aert triple is pretty great. Max respect to these cyclists who can excel in multiple situations.
Click to expand...