Question What first drew you to pro cycling?

Page 2 - Get up to date with the latest news, scores & standings from the Cycling News Community.
Sidebar Sidebar

Previous Next Sort by votes
0

Beijing Olympics. I ended up watching this live stream with no commentary and all you hear is the sound of tires, the shifting of gears. They whoosh through the turns and when the cars come by you can really hear it. It was not presented in a way that tried to explain the sport or the individual athletes. I did not know 1 rider nor any information about who the favorites were and if you remember the course it went by the forbidden city but it wasn't awe inspiring like, you know, the alps and whatnot.

I felt like I was really there. Looking back I feel it was the PERFECT way to present a single day race that way with no commentary talking over the live sounds. I was fascinated by the effort and the adventure these guys were going on. I was hooked after that, possibly because it was in the middle of a 10 year stretch where I didn't own a car and rode my bike everywhere. I got cycling TV for the next season and just started watching all the races I could. Still do.
0

2003 Tour de France, I have fond memories of especially Alpe d' Huez that year and I became a big Mayo fanboy, but he was just so *** in every other Tour, lol. Also felt really bad about Beloki who never was himself either again, and Ulle and Vino were just super cool and I always also rooted for them from that point on. Just so many legends and a great Tour
Reactions: Koronin
0

When I was four years old I made my first correct cycling prediction. My uncles often watched and discussed cycling. I only knew two names: Hinault, who was always first; and Zoetemelk, who was always second. In 1980 Hinault withdrew from the Tour because of a knee injury, so I said,

"So Zoetemelk is going to win!"

My uncles laughed and said that wasn't going to happen. Two weeks later it turned out I was right. Since then I always try to predict the outcome of a race. I now know more than two names and have more tactical insight, but that doesn't mean I always get it right.
Reactions: Big Doopie
0

Valv.Piti said:
2003 Tour de France, I have fond memories of especially Alpe d' Huez that year and I became a big Mayo fanboy, but he was just so *** in every other Tour, lol. Also felt really bad about Beloki who never was himself either again, and Ulle and Vino were just super cool and I always also rooted for them from that point on. Just so many legends and a great Tour
Click to expand...

Those were the days, don't forget Hamilton with his broken collarbone.
In the 2004 Tour only Basso and Klöden were pleasant surprises for me.
Then the 2005 TdF happened and I suddenly didn't care that much about Basso: 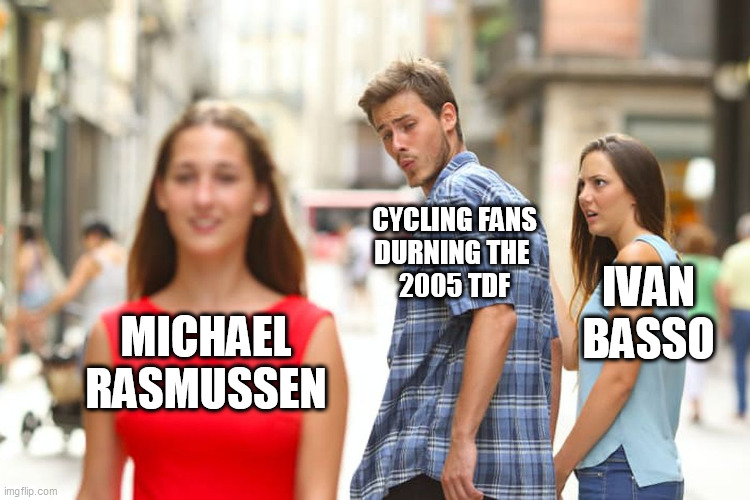 I was a moto guy who also rode a bit of BMX, played some ball sports, and ran for fitness, but I remember watching ABC Wide World of Sports when they would do their TdF weekly recap show, maybe starting in '86 (LeMond). I was always impressed with being able to pound out the miles day after day, but it didn't hook me too much. I also saw a really wet edition of P-R. Flash forward to 1991 when I got out of the Army and was looking for an athletic outlet. I bought a mountain bike on a Tuesday, and did a race that Saturday. It was joylessly miserable, and I have been riding ever since. I didn't really get 'drawn in to pro cycling' until '93 when I decided that I might be able to 'make a living' racing mountain bikes so I started training with a group of roadies who where always talking about Euro road racing. I started reading about it quite a bit, and watching whenever it was on USA TV or when someone got a VHS tape of races. The Internet also started making it easier for USAers to watch Euro races. Also at that time, it was pretty common for pro dirt guys to join composite teams at road races so I was literally drawn in to USA pro racing.

So to the OP, my involvement drew me to pro cycling I guess.
Reactions: Big Doopie and BlueRoads
0
O

Watching a well sponsored local crit that included US Continental touring pros and local amateur Cat 1,2; I saw crashes and attacks and thought this is a really an intense sport.
The deal was sealed the next weekend when I went to the local velodrome on a beautiful sunset evening with Mt. Rainier looming above the South turn, hot air balloons overhead and a certain Ms. Rebecca Twigg walked by in a skinsuit. Newly divorced, broke and needing an outlet for what ailed me my second reaction was: "what a beautiful sport!"
I had no idea where that would lead. Wouldn't change a thing.
Reactions: Irondan
0
P

What is the name of that polish guy who hassled Lance! Novinsky? What a ***. SSDD SSDD SSDD
0
R

My dad is a casual fan. He was hooked on the late 50s due to Bahamontes, who was born in the same region as him. Then he followed scarcely whenever there was a prominent Spanish cyclist (Ocaña, Delgado, Indurain...). While following Indurain, the attacking and fearless style of Pantani caught his eye, so he used to watch whichever GT Pantani entered.

My first memories are watching Giro 98 with him. Since he was rooting for Pantani, I picked Tonkov (his main opponent in that race) as my favourite. I liked that race and began following the sport until now.
0

Roku said:
My first memories are watching Giro 98 with him. Since he was rooting for Pantani, I picked Tonkov (his main opponent in that race) as my favourite. I liked that race and began following the sport until now.
Click to expand...

Any particular reason you didn't wanna root for the same rider as your dad?
0
R

RedheadDane said:
Any particular reason you didn't wanna root for the same rider as your dad?
Click to expand...

I guess it was just to tease him as a little child. I was just 7 years old then. In my defence, i rooted Tonkov from then on and have good memories of celebrating his success in Vuelta and later Giri (2002 in Fauniera, 2004 in Fondo Sarnonico).

And I have to say we started somewhat of a trend (I was a big Armstrong fan back in the day, he didn't like him at all. In hindsight he was right there; he was also a big Contador fan too while I didn't like him at all and supported Menchov back then), and we have had a lot of fun by teasing each other whenever our cyclists won/lose
Reactions: Irondan, jmdirt, Sandisfan and 1 other person
0
D

Was staying at my sister's for a few weeks in July 2010, one night bro-in-law left the TV on when he hit the sack and the Tour was on. Having spent time in the French countryside I was enjoying the helicopter shots, and got quite interested in the battle between Schleck and Contador, who - at the time for me were simply "the two lead guys". Naturally I knew almost nothing about tactics and rules (written or unwritten), aside from whatever the commentators may have said, so I couldn't understand what the fuss was about this "chain gate: thing!

Following year I was back there again, so got to see Cadel win, being Aussie that was a big thing.

2012 Tour was horribly boring, nothing really happened at all. But even still I just found watching a bunch of humans cycling out in the countryside was really enjoyable to watch, so I kept watching from there on, though only the Tour until 2014 when a friend into cycling told me to watch the classics, and so, along with the other GTs that was that.....
Reactions: Oldermanish and Sandisfan
0
S

My dad (a racer in the 60s) ably assisted by Phil Liggett and Paul Sherwen and Channel 4. I remember Hinault with blood all over his face as a 7 year old, this swish looking American as an 8 year old, Herrera with a spotty jersey and his mad long range attacks and Roche back from the dead as a 9 year old.

If only we could go back to those crazier days.....I still love it though.
0
S

I was a touring bicyclist and rode across the U.S. in 1979, but didn't know anything about racing. That winter, a friend convinced me to go see a movie I didn't know anything about. That evening, watching "Breaking Away" for the first time, I was enthralled by (the obviously Hollywood version of) the sport, and started looking at my bike, which was the only transportation I had my first year in Seattle, with a different eye. Started hanging out in bike shops and went to watch some local crit racing. But I really got intrigued with European pro racing after reading a fascinating Sports Illustrated article in probably 1982 or 1983, about Lemond racing and living in Europe when he was with Renault. Then came issues of "Winning" and and the John Tesh tour recaps on CBS with Lemond reaching the pinnacle of the sport. I was in for good.
Reactions: jmdirt, Sandisfan and Oldermanish
0

Hinault vs LeMond 1985-86. My dad was an amateur racer and coverage moved to CBS on the weekends in the classic adventure documentary format. Also the reason I’ve NEVER complained about Phil Liggett. I literally grew up with him as part of my family and remember the John Tesh years in real time.
Reactions: BulgaSpal and Sandisfan