After years of dwindling fields and interest and a botched first outing with a better field in the new calendar slot next year due to poor rider safety, the Tour de Luxembourg is back with a new look. Gone is the focus on shorter hills and smaller gaps, replaced instead by a hard route with a queen stage that could be considered a mid-mountain stage and an unusually long TT for a five-day race in this day and age. With the likes of Almeida, Mollema, Gaudu, Pinot, Quintana, Ayuso, Formolo, Cosnefroy, Chaves and Ewan here, the startlist is the strongest it's been for a long time too. This should be a good one. Stage 1: Luxembourg - Luxembourg, 140.0 km
The race starts with a shortish, but reasonably hilly affair. Despite some tricky hills in the middle of the stage, this one should be all about the final 10 kilometres, with the deceptively steep final categorised climb of the day and an uncategorised ascent of the Kirchberg, where the finish line is situated. There's a 90-degree left-hander at about 250 metres from the line, something to take note of if this is a reduced sprint. 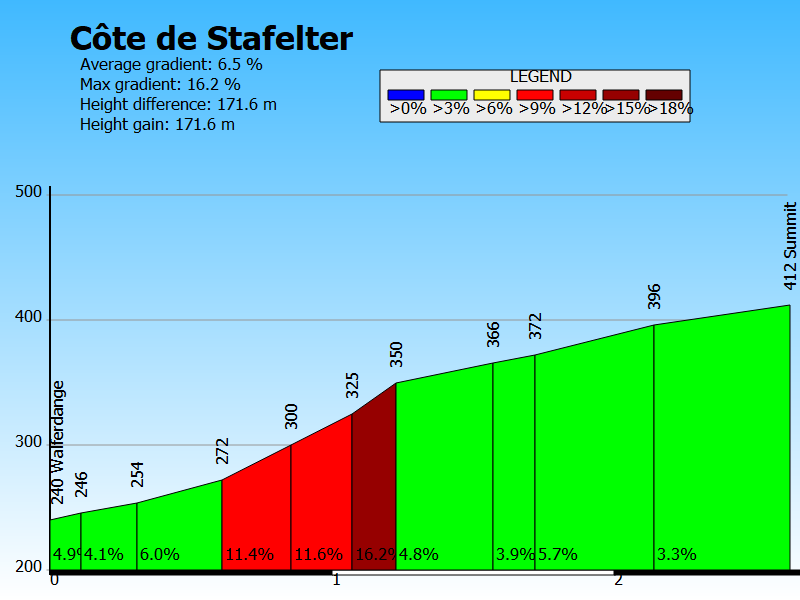 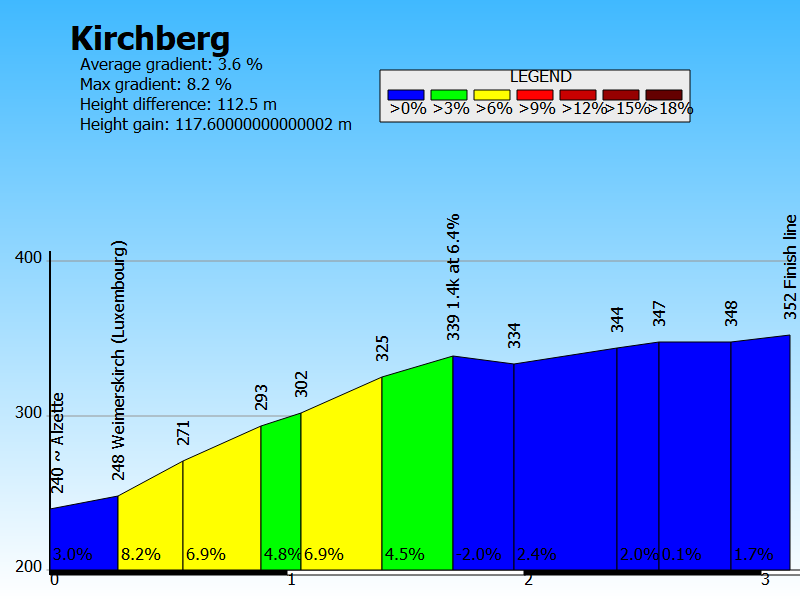 Stage 2: Steinfort - Eschdorf, 186.1 km
The queen stage comes quite early into the race. It's up and down all day, with some hard climbs before three difficult ascents of the climb to Eschdorf, 800 metres from the finish line.

For anyone looking for video footage of the climb: it featured mid-stage in the third stage of the 2017 Tour de France.

Stage 3: Mondorf-les-Bains - Mamer, 189.3 km
The longest stage of the race is also the most realistic sprint opportunity. Having said that, there's still quite a bit of climbing to do, with all eyes on Lotto Soudal, there's more than one way this one could go. The lap circuit, completed twice, is rolling, and ends with 900 metres at 2.0% starting from the final roundabout. 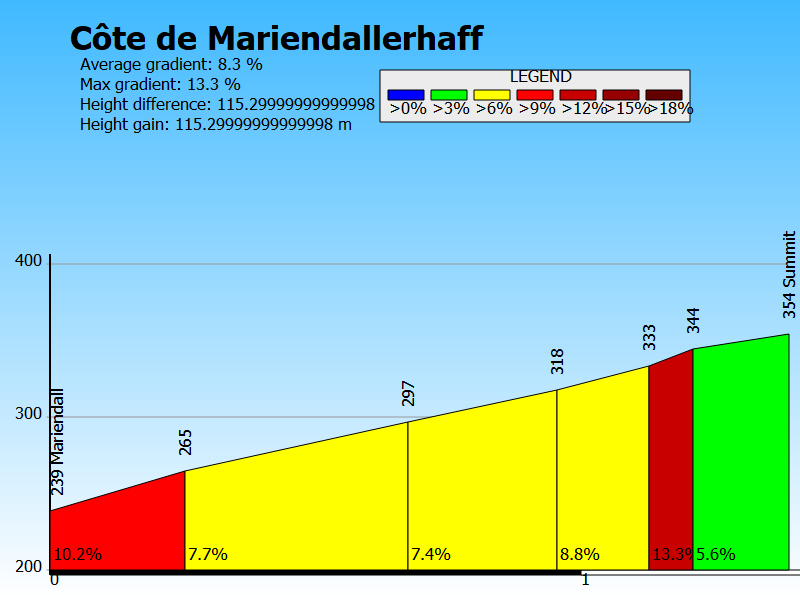 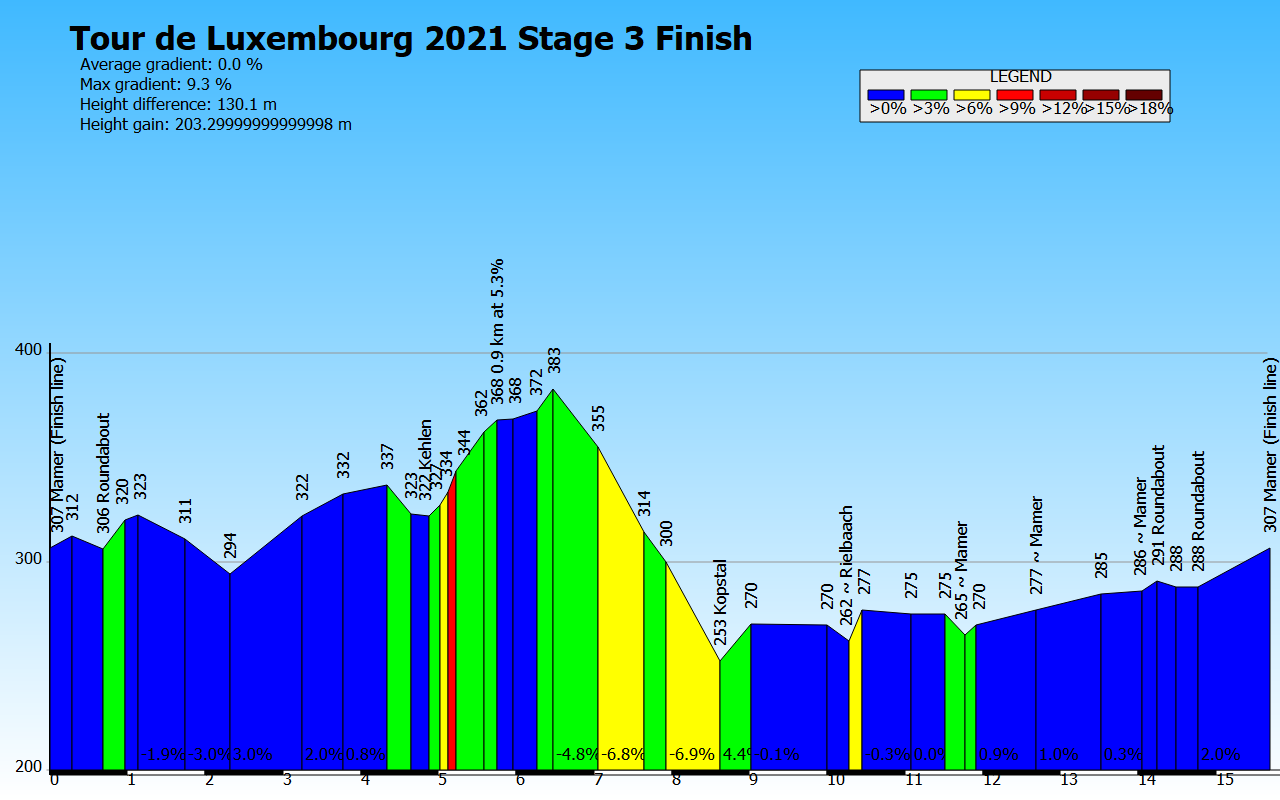 Stage 4: Dudelange - Dudelange, 25.4 km (ITT)
Yes, it's actually longer than the Euros TT... and both hillier and more technical as well. The steep section in the PCS profile doesn't actually exist, though. 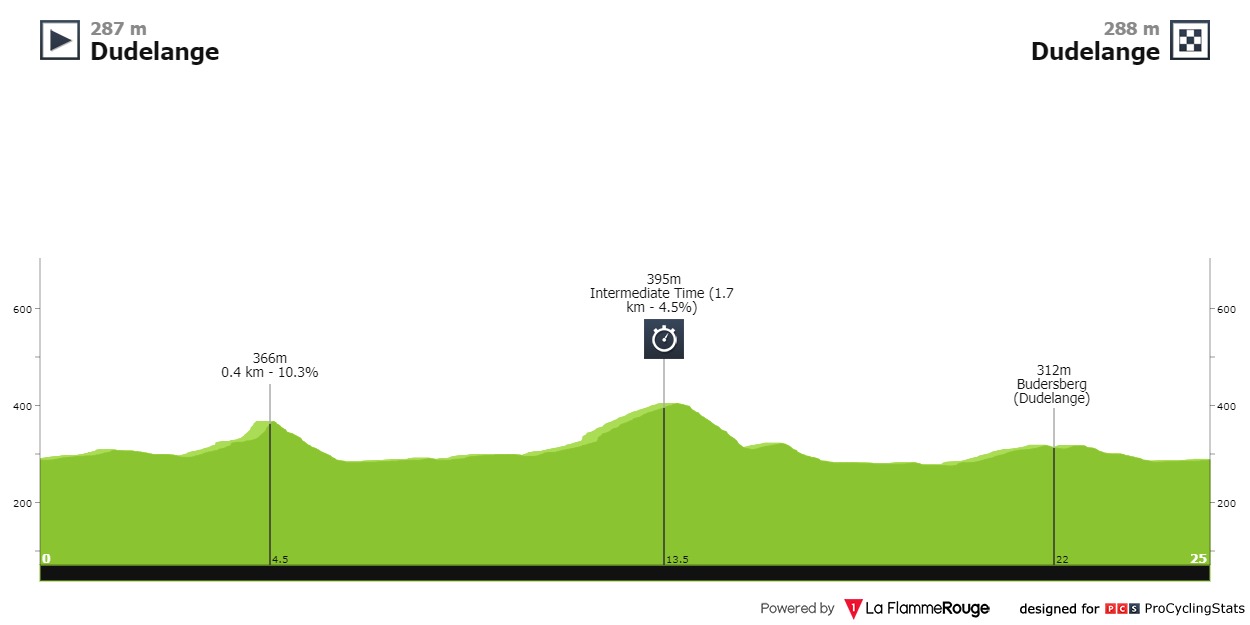 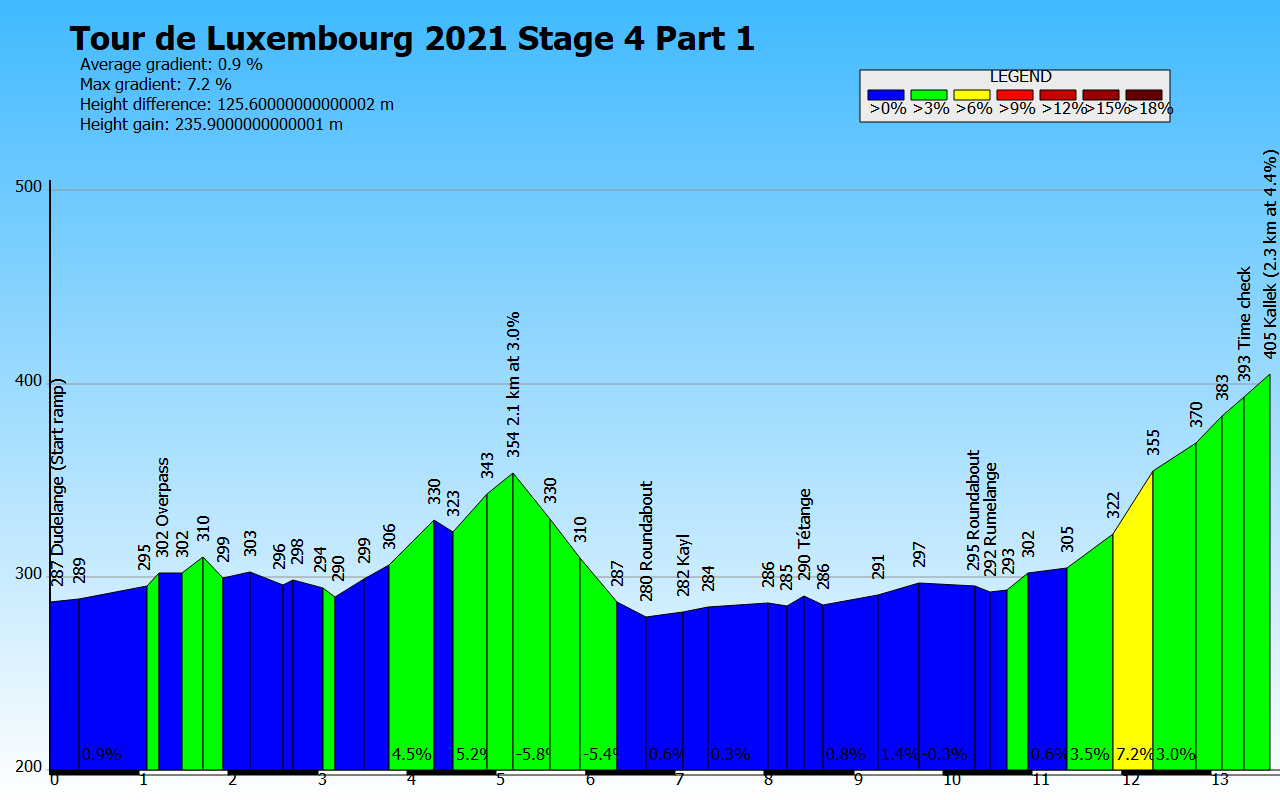 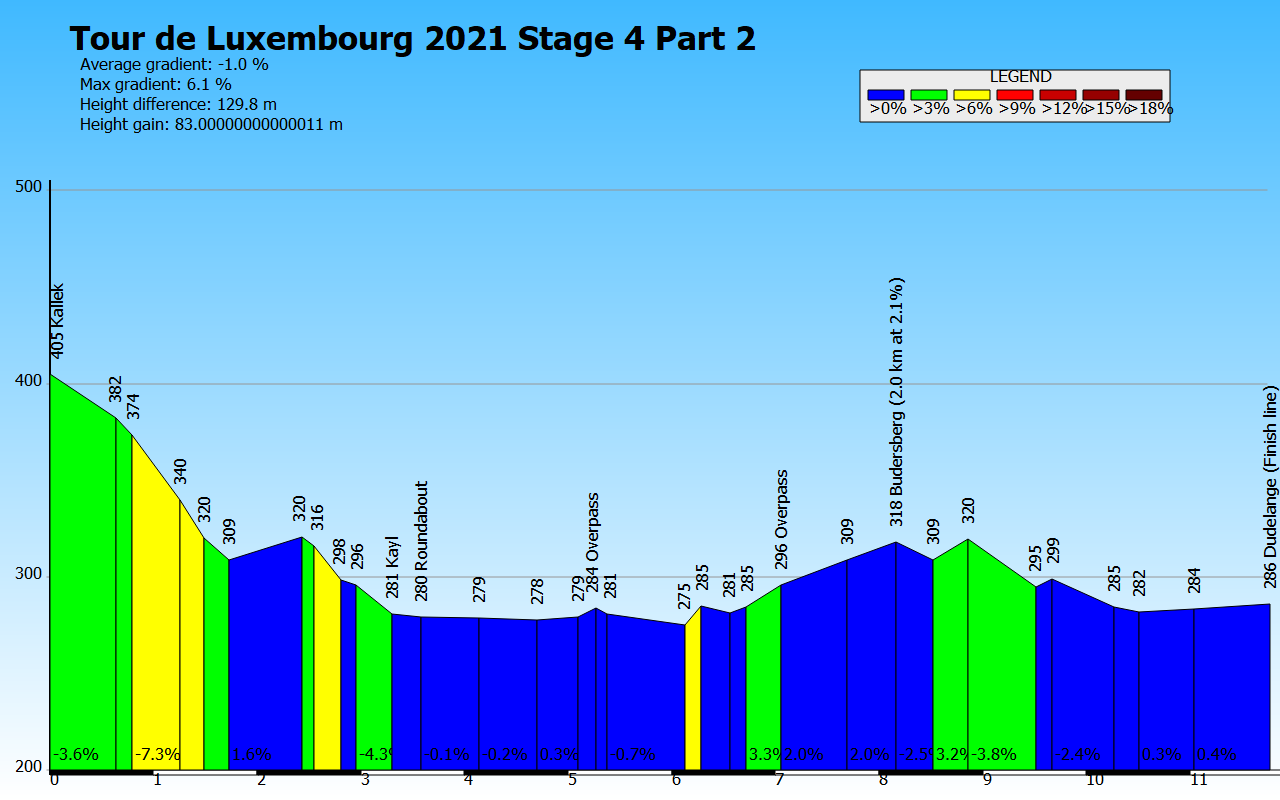 Stage 5: Mersch - Luxembourg, 183.7 km
The final stage is on much more familiar terrain, with the classic Pabeierbierg featuring on a longer circuit than we're used to seeing in the final stage of this race. The finish line is also after the usual double right-hander 300 metres out. 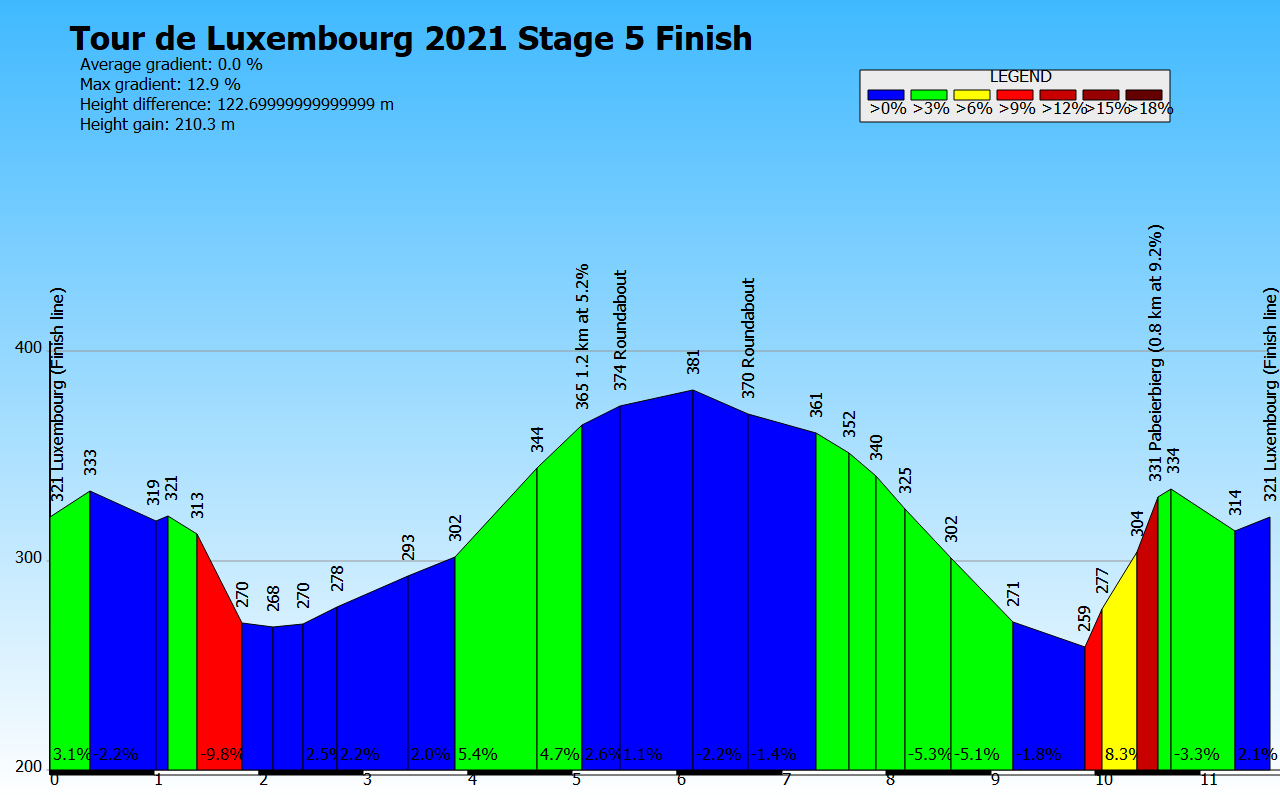 FAUSTO MASNADA is on the startlist after his injury in July!

He restarts the racing and looking to build for the Italian classics.

Really excited to see how he goes.
Reactions: Sandisfan

I'm really impressed with those HC climbs, will the riders be able to handle the altitude?
Reactions: BlueRoads, Ilmaestro99 and noob

This race might be one of the few "Tour de [Country]" races that actually covers (almost) the entire country.

Love how all the road stages are criss-crossing back and forth over pretty much the same roads, while the TT is just by itself down in the south.
Reactions: Sandisfan, DenisMenchov, Samu Cuenca and 3 others
Y

This should be a race for Almeida - Ewan is using this race as specialised training for the World's - Think he'll struggle to make the final of the World's but he's given himself every chance - Otherwise. Ewan would have ridden Slovakia.
Last edited: Sep 14, 2021
Reactions: Sandisfan

RedheadDane said:
This race might be one of the few "Tour de [Country]" races that actually covers (almost) the entire country.

Love how all the road stages are criss-crossing back and forth over pretty much the same roads, while the TT is just by itself down in the south.
Click to expand...

They should rebrand it as the Luxnebe Tour.
Reactions: RedheadDane
N

yaco said:
This should be a race for Almeida - Ewan is using this race for specialised training for the World's - Think he'll struggle to make the final of the World's but he's given himself every chance - Otherwise. Ewan would have ridden Slovakia.
Click to expand...

As much as root for Almeida I am not sure. It's a stronger field than Tour de Pologne. Even I can see that. But mostly it has so many attacking riders from last two GT. I expect attacking chaos, but I guess it all depends on how many are saving their energy for Worlds.
Reactions: Sandisfan

Looking at the start list I would take 10km off the ITT to make the race perfect since Almeida should be able to put GC out of reach over 25km.
Reactions: Sandisfan and F_Cance

The course suits Almeida better than Cattaneo, but he might not beat him in the ITT. Armirail shouldn't be fully disounted either, though he might struggle on the climbs in this field.
Reactions: Sandisfan

I think it will be interesting to see if Hirschi is truely on an upward trajectory.
For GC I think everything depends on how much each rider is saving himself and how much they are willing to give. Cosnefroy should be able to contend a few stages, but the time trial should be his weak spot.
Reactions: Sandisfan and noob

Finished the OP, I ran into the image limit (again) so the profiles of the lesser climbs are hyperlinked instead (again) because I forgot to add an overflow post when I opened the thread (again).
Reactions: noob

wheresmybrakes said:
I'm really impressed with those HC climbs, will the riders be able to handle the altitude?
Click to expand...

It's even better because there's no category below 1. Truly the truest of high mountain races!
Reactions: johnymax, southwards, Carols and 5 others

Infinitely better than recent historic editions of the race on paper. Really goes from somewhat disappointing to truly using the best of the country.

However, changing the prologue is a shame, I thought that ought to have been sacrosanct, the cameras following the riders through the narrow cobbled roads was beautiful.
Reactions: MrTea1976 and Sandisfan

Yeah that 25k TT is ridiculous is a race like this. Completely ruines the GC.

But apart from that, great parcours and lots of good riders starting.
Reactions: Sandisfan

Has he timed it right?

Gaudu riding away from the picnic

Almeida did it
Reactions: Sandisfan

Nice ride by Almeida.
But damn! I kinda wanted Gaudu to take it.
And Bauer...
Reactions: Sandisfan