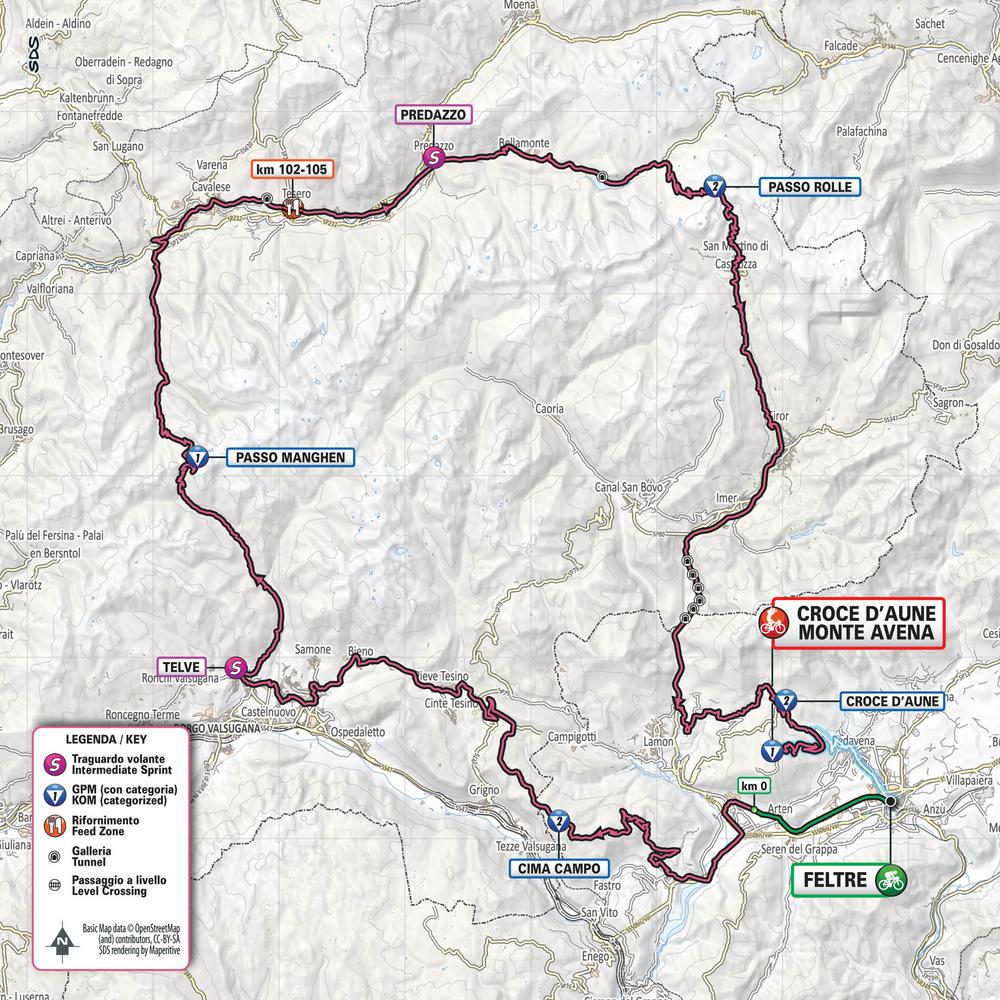 Technical Overview:
The final showdown has finally come. The stage with the highest potential of this Giro, a potential for either greatness or disappointment, as it is often the case with the last mountains stage of any edition. The stage starts in Feltre and finishes right above the town, on Monte Avena. In between, four GPMs and the last chance for the GC contenders to gain any serious amount of time, on a route that is almost identical to the Granfondo Sportful (except the finale). The first GPM starts just 8.5 km of flat roads after the start: Cima Campo (GPM2, 18.7 km at 5.9%) is a long and steady climb, almost always between 6% and 7% for the first 15 km. Its descent is narrow only in the first part and is quite straightforward, although it does feature a small ramp around halfway. It ends in the town of Scurelle, which also marks the beginning of the second climb of the day, the biggest one. One of the biggest of the whole edition, in fact. Passo Manghen (GPM1, 18.9 km at 7.6%) is a monstrous climb: the organisers have put the official start in Telve, where they also placed an intermediate sprint, but the climb actually starts 4 km before at a steady 5%. The first two thirds of this climb are very irregular, with two 2 km long 9% ramps in between three 5% sections. After them, however, its last third is much more regular, and also steeper, with 6.1 km at 10% average. Manghen is a very famous climb that has not been raced much in the Giro at all, and the last two times it was, in 2008 and 2012, it was far from the finish and saw little to no action. Today it's even further from the finish (116 km to go)... but unlike those two occasions, this time it is the last big climb of the stage and of the whole Giro. This is the last chance for those who need to gain more than, let's say, one minute and a half, so hopefully we will see some more action this time. The descent is very fast and narrow, and after it there is a small ramp of 3 km at 6-7% that leads to a flat section in the valley. This section is 15 km long and ends in Predazzo with the last intermediate sprint. Here, the road goes up again for the third GPM of the day, which is in fact a pass the riders have already partially climbed yesterday, albeit from the other side: Passo Rolle (GPM2, 20.6 km at 4.7%). From this side, it is easier, as its two main sections at little over 6% are divided by a false flat section of 7.3 km in the middle. At this point in the stage (and in the whole race), the riders should not underestimate any climb. The 6% sections of Rolle are more than enough to attack, if needed. The descent is long and very technical, and it could be another good place for an attack. At the bottom, however, there are 18 km of descending false flat down the valley, which admittedly are not ideal for attacking. The valley ends at 22 km to go, with the start of the penultimate climb (which was originally planned to be the last one), the Passo Croce D'Aune (GPM2, 11.1 km at 5.5%), which in terms of structure is a small version of Rolle: first ramp at 6.5%, the 4 km of false flat in the middle, then uphill again for the last part. This last section is much steeper than anywhere on Rolle though, with a solid 8.3% average and some short but very serious ramps (max 16%). Needless to say, that's another good place to attack, if you don't need a lot of time. The top of Croce D'Aune is at only 11 km to go, 4 of which are of descent. Up to here, the route is exactly the same as the Granfondo Sportful, to which it is inspired. The Granfondo would just go all the way down and return to Feltre... instead, the Giro goes up again to the finishing line of Monte Avena (GPM1, 6.9 km at 7.3%), a very solid but not particularly hard climb, that is GPM1 only because it is the MTF of the final mountain stage. So this is it. The last chance for the climbers. The TTers, however, still have one small chance tomorrow...

Passo Rolle, GPM2, 20.6 km at 4.7%
The first Dolomite. From this side it's not much, but it still has some decent ramps in the first and last sections.

Passo Croce D'Aune, GPM2, 11.1 km at 5.5%
Not particularly hard, but it does have a tough final section, which should be the last spot available to launch an attack of any ambition.

What to expect:
As with all final mountain stages, it depends on the GC situation. If it is done and dusted, expect nothing before Croce d'Aune. Same if it is too close. BUT if it is on that sweet spot of a fading leader with 2-3 minutes of advantage to an opponent on the rise... why not dream. A solo attack on Manghen is out of the question (...I think), but any decent pace there will isolate any leader that does not have the strongest team. Very important will also be the break of the day on Cima Campo: attacking on Manghen is totally possible if the goal is to connect with your teammates in the breakaway. In case there is only good pace on Manghen, a solo attack is maybe possible on Rolle, if the leader is isolated and weakened. Or maybe a small group of 2-3 contenders might get away. If nothing happens there, the last chance for a somewhat long attack would be Croce d'Aune, but it is not gonna give you a lot of time, unless the leader cracks completely.
In the last 3 editions of the Giro, the pink jersey has changed a total of five times in the last three stages of the race. That is, 5 stages out of 9 have seen a change of leader at the end of the Giro, more than half of them. Is this year going to keep up with the trend? 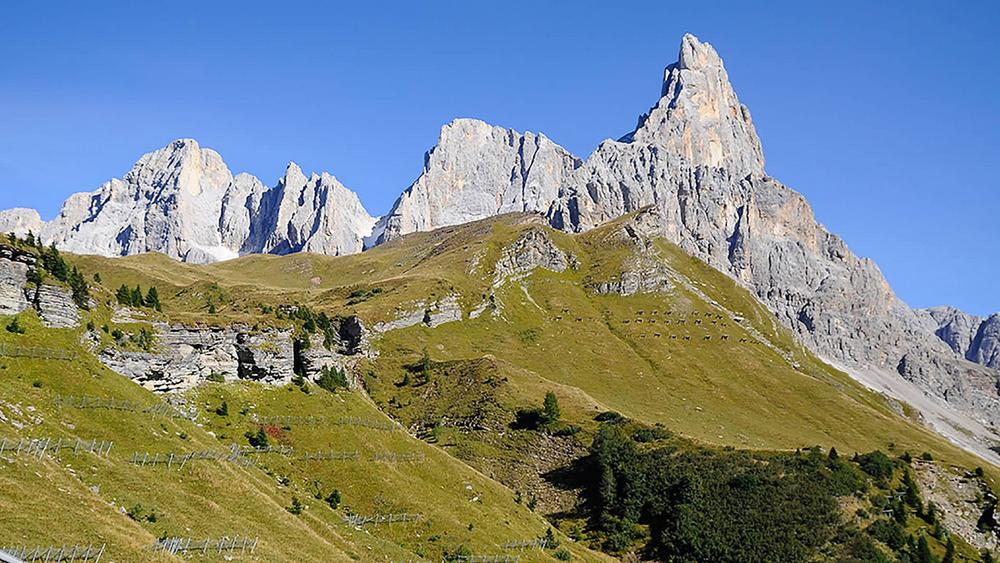 The Dolomites seen from Passo Rolle
Click to expand...

Nibali to do a Contador and lose his podium, Movistar to nail it, Roglic to keep his podium secure. Nibali to regain his podium in the ITT.

Landa to do a Contador vs Armstrong and gain 5 minutes.

Landa to do a Contador vs Armstrong and gain 5 minutes.
Click to expand...

It would be epic if Landa went crazy on Manghen and had a minute at the top and everyone else in pieces...
A

If not Landa would the favorites react if Lopez and Majka attacked on Manghen?
S

I really have no idea what to expect here. Nothing much would surprise me. Hard stage, but guys like MAL and Nibs will probably go for it at somebody point and then we’ll get to see who can hang on and who is done.

Superman will be dropped on the first climb.

And then yoyo his way to a stage win later on.
D

Movitrain will control the race until at least km180 and then we shall see.

Nibali to attack on Passo Manghen

5 Movistar domistiques to close it down

Nothing exciting to happen

Nibali should send Caruso in the break. Antonio and Pozzo to set a strong pace on Manghen and the first part of Rolle. In the last km's of Rolle, Vincenzo attacks and Caruso leads him until the flat part of Croce d'Aune. You should know the rest.

I really wanna see some GC action on Manghen. That climb is brutal. I had a hunger knock there during a training, one of the worst days of my life.
A

Huge Carthy to win the stage.

It's not just Nibali, Astana, EF, Zakarin and maybe even one of the Bora guys will all try to attack.
With Nibali signing with them I wouldn't even be surprised if we see Ciccone riding for him, after taking the Cima Coppi of course. 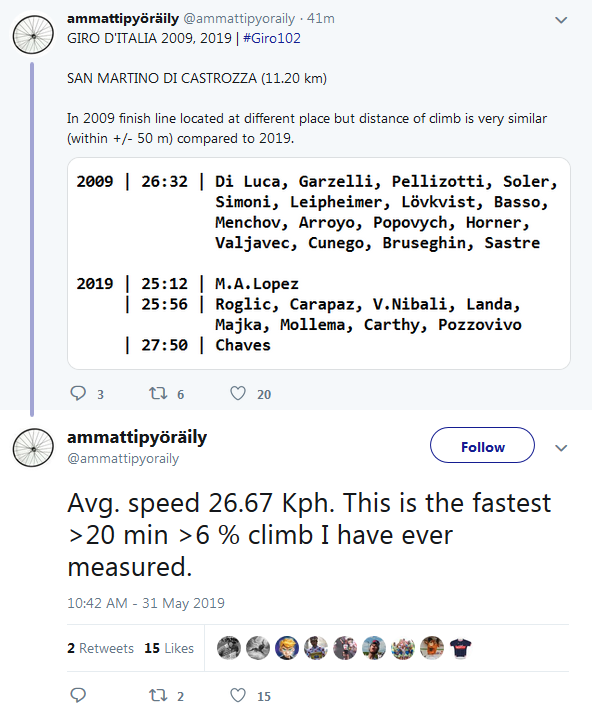 No one can beat Carapaz to death (>2min) on the last climb
If any guy there still has a dream about winning Giro, rockets have to be launched earlier.
Probably from the start.
Can't see team capable of.
A

Yea, I'm just hoping for early attacks that shed domestics. To see the GC contenders dueling amongst themselves before the penultimate climb would be a dream 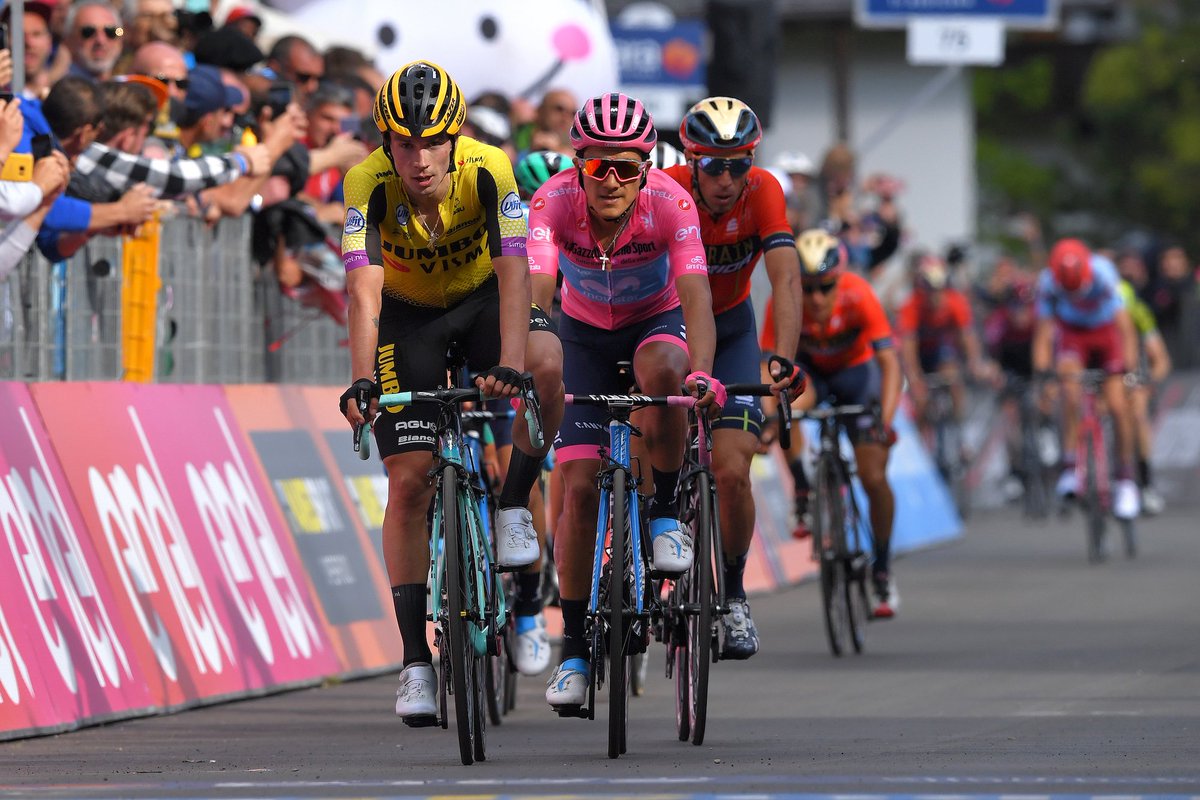 After this stage:
Nibs will seal 2nd place, Carapaz will seal the 1st place and Rogla will fight against Landa for the 3rd in final TT.

Nibali needs around 1:10, that'll be 1 min on the road and 10 boni if he wins the stage. There's another climb and a descent before the last one. Hard to believe but not impossible.
You must log in or register to reply here.
Share:
Facebook Twitter Reddit Tumblr WhatsApp Email Link