With bigging up Brand as a top climber, this isn't a stretch. Although she isn't explosive (which is kind of strange for a cyclocrosser, but apart from two top 10s (including an Amstel Gold podium) from the break she's fairly quiet in the Ardennes and has never contested the GC at races like Emakumeen Bira), longer climbs where the diesel can get warmed up she's top quality. She was 2nd on Torre di Fraele in the Giro 2019, 4th in the Teglio MTT, 3rd in the Campo Moro MTT in 2018 and 6th on Monte Zoncolan, won the queen stage in the 2017 Giro, and has been top 10 on GC there a few times. Was she likely to theaten Annemiek van Vleuten or Ashleigh Moolman-Pasio here? No. But she was definitely a shout for the top 10.

As for ES thinking Deignan will outsprint Rivera, Deignan has a good finishing kick and Marty McDonald is a bit of a Lizzie fanboy, and it wouldn't be the first time he's kidded himself as to her capabilities at a given time. At La Course he was genuinely thinking that she was still in it as her group sat several seconds behind the leaders while the sprint was being led out by van der Breggen.
Reactions: Samu Cuenca

Rossella <3 roll back those years!

Great that the race finishes early today. Let's see if they can work together and bring the break back.

Cille wants fireworks, but I'm not sure much will happen, but fingers crossed.
Faulkner and Jackson are fighting for the points jersey, so they'll have to keep an eye out for each other.

That was never going to work out for Ysland, but at least she got some more camera time. And it gave TV2 a perfect opportunity to both show her pre-stage interview and to talk about her. She is currently my second favourite 19 year old rider behind Bäckstedt, so seeing both of them at the front of the peloton today is just great.

Samu Cuenca said:
Great that the race finishes early today. Let's see if they can work together and bring the break back.

Cille wants fireworks, but I'm not sure much will happen, but fingers crossed.
Faulkner and Jackson are fighting for the points jersey, so they'll have to keep an eye out for each other.
Click to expand...

Libertine Seguros said:
This worries me for the Prediction game as Faulkner is within a bonus second strike of Mavi García's GC podium. I also lose out on Prediction game points vs. others if Cille wins and GC podiums, but a Cille win is a Cille win.
Click to expand...

Well, my only shot is a Rivera win now, but unfortunately Põhja Konn also ended up picking her. Still an extra 0.5 point is better than nothing.

Ratto was dropped, and Van de Velde now only has a minute to the peloton with 27 km left.

García was involved in a crash, and although she was quickly back on her bike, she is now 20 seconds behind the first group.

Jackson beat Faulkner in the last intermediate sprint and has taken the lead in the poinst standings, but there are still points left on the line. 9 km left.

García will lose a lot of time here, I'm afraid, LS. Trek and DSM are pushing the pace now. Valcar are also their with Consonni.

A lot of people were happy on Hosking's behalf (especially Worrack), after she's been out for some time due to a Covid positive and some other health reason.
She has however been travelling around of Europe, spending time with Julie Leth and her family in Denmark and visiting Cordon Ragot in France doing the Tour, for instance, before she was finally cleared to race again. And this win definitely meant a lot to her.
Reactions: Barnacle Bill and RedheadDane

Both García and Fisher-Black dropped out of the top 10. Jackson and Roy didn't get the memo about only riders with first names starting with either C or E being allowed to contest the sprint.

Apparently Jackson has won some salmon. 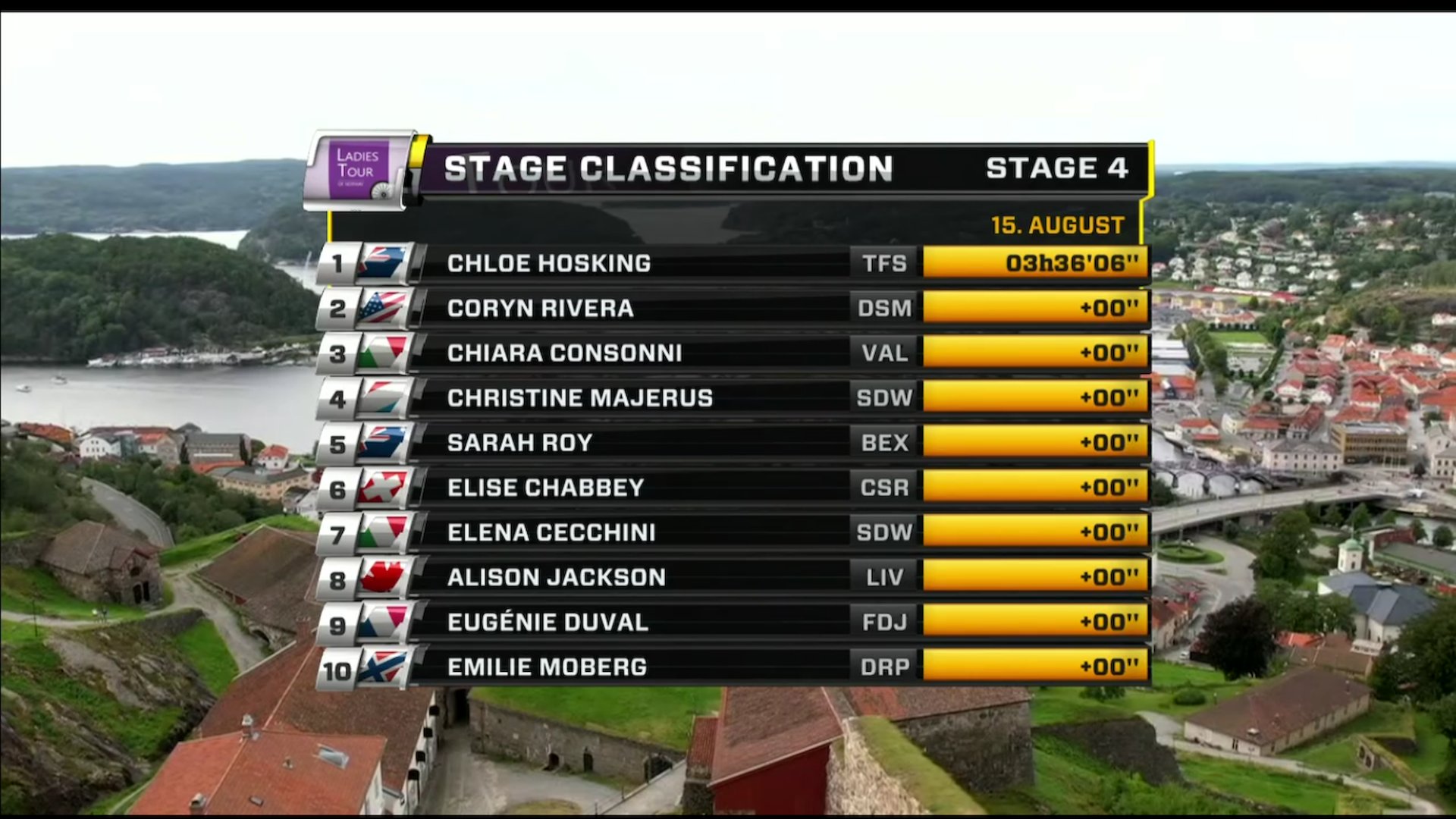 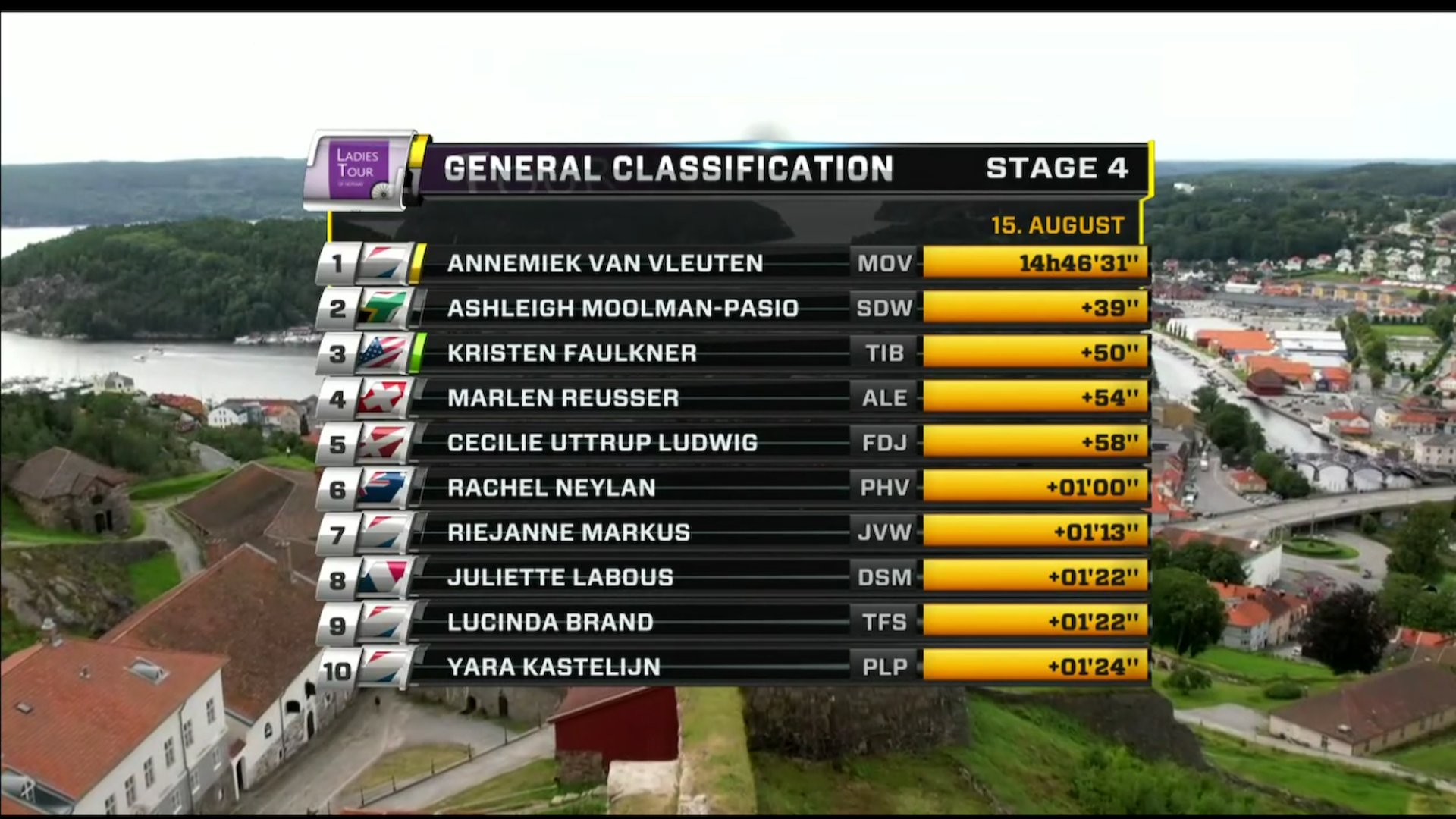 That was a beautifully crafted sprint by Hosking on a technical circuit - Think she'll be doing lots more touring of Europe in the off-season.
Reactions: Samu Cuenca
You must log in or register to reply here.
Share:
Facebook Twitter Reddit Tumblr WhatsApp Email Link