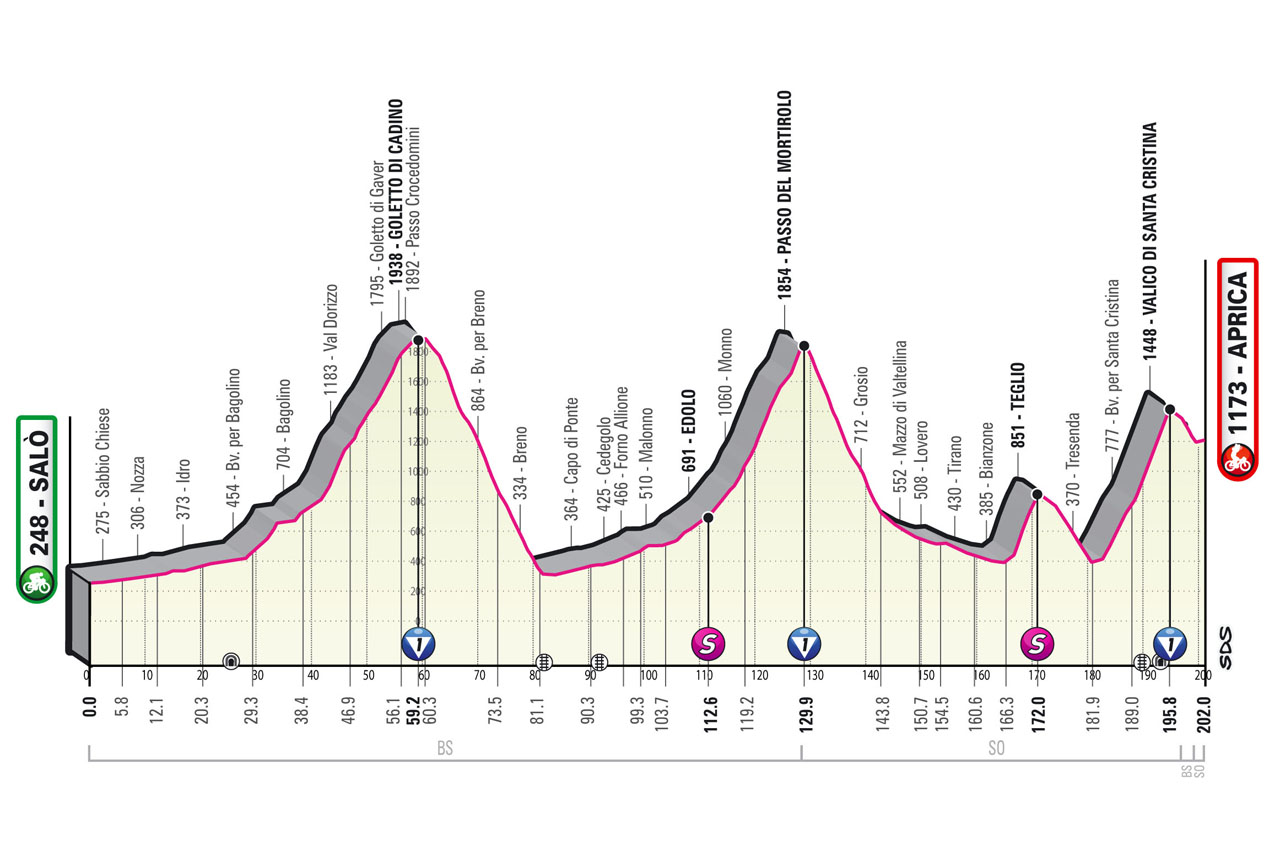 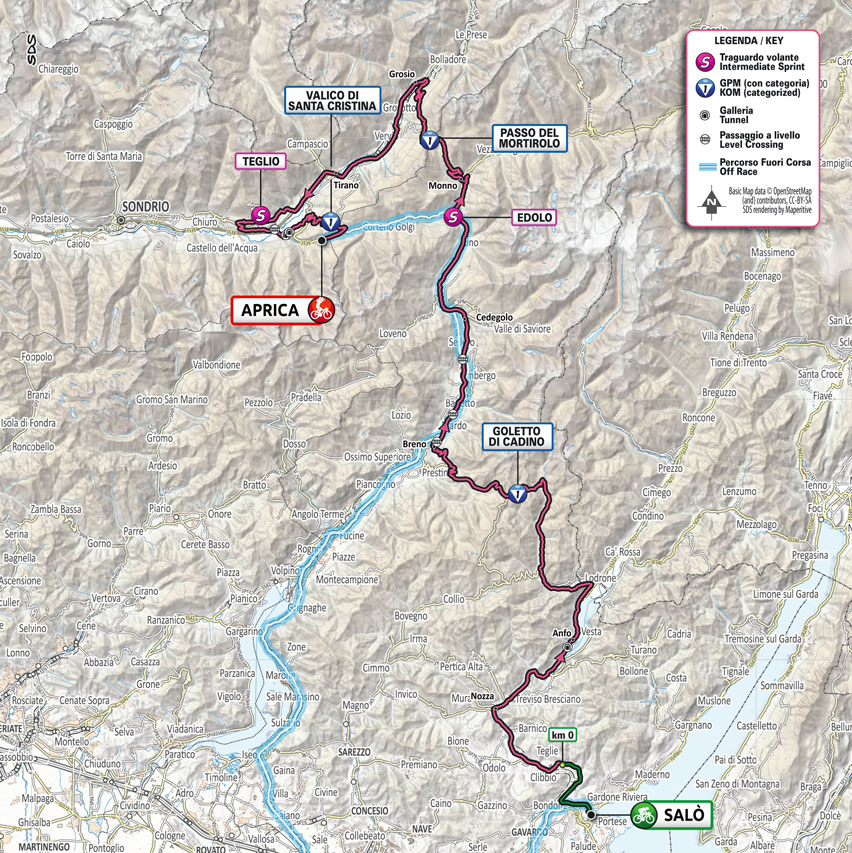 Technical Overview:
After the final rest day, it is time for the queen stage. From the town of Salò, on Lake Garda, the riders will head into the mountains and face big and famous climbs all day long. After a first 30 kms of gently ascending false flat, the peloton will reach the foot of the first climb of the day, a big one already: Goletto di Cadino (GPM1, 19.9 km at 6.2%), better known as Passo Crocedomini (which is a pass just a few meters below the actual top), is not as grueling as it is from the opposite side, but it is still a long and tough climb, that will wear legs down nicely, as well as determine the composition of the breakaway of the day. The descent is long, steep and quite technical, so this might also be a good point for riders to jump, if the breakaway is still in reach. At the bottom, the route will keep heading north along the Valcamonica for a little over 30 kms, all ascending with increasing gradients. On the way there will also be the first intermediate sprint, which will most likely be contested by the breakaway. After reaching the town of Edolo, the second climb of the day, the mythical Passo del Mortirolo (GPM1, 12.6 km at 7.6%) starts. Unfortunately this is the easy side, the one that is usually descended. Either way, this is far from being an easy climb, with gradients consistently around 8% with the exception of one flattish km near the top, before a final steep ramp. Its descent is also very tricky and might be a good spot for tactical moves to happen. The descent ends in the town of Grosio, and from there the riders will head down the Valtellina through 20 kms of descending false flat, the last easy part of the stage. At 35 kms to go, the hardest non-categorized climb of this Giro begins. Teglio (5.6 km at 8.2%) should be at the very least GPM3, but it is an intermediate sprint instead. It tops at exactly 30 km to go, 10 of which feature a technical descent. At 20 kms to go, with hardly any flat section in between, the final climb starts. The famous Valico di Santa Cristina (GPM1, 13.5 km at 8%), taken for the first time from the hardest road. Made immortal by the mythical stage of 1994, this pass has always been approached only from halfway, using only its steep second half. This added first half is not as steep as the top one, but it still provides good gradients and makes it a much more demanding climb. The top is at only 6 km to go, 4.5 km of descent and 1.5 km of false flat to reach the finishing line of Aprica, one of the most iconic Giro finishes. 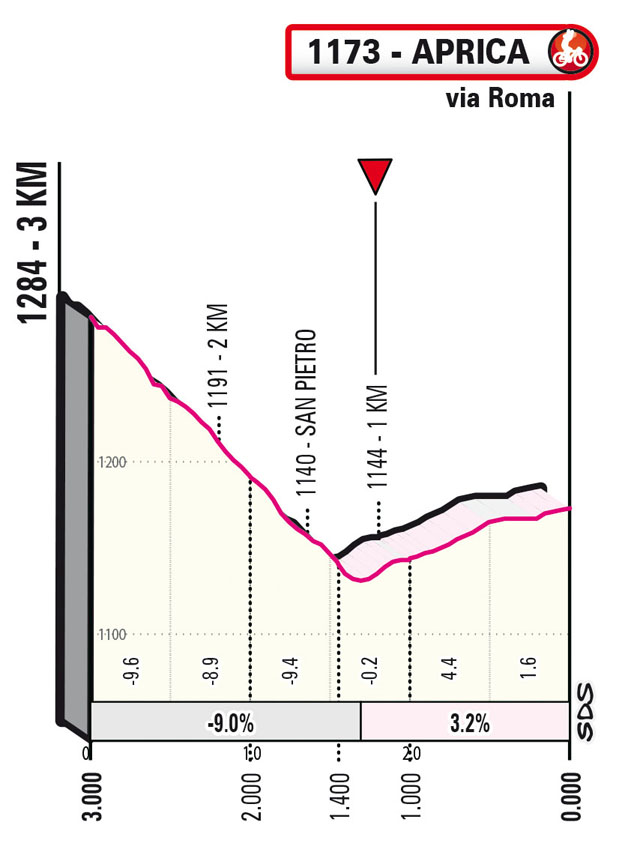 Goletto di Cadino: GPM1, 19.9 km at 6.2%
Much better known as Passo Croce Domini, this climb has been missing from the Giro since the ‘90s. This side is not crazy hard as the other one, but still a big climb that will wear legs down nicely. 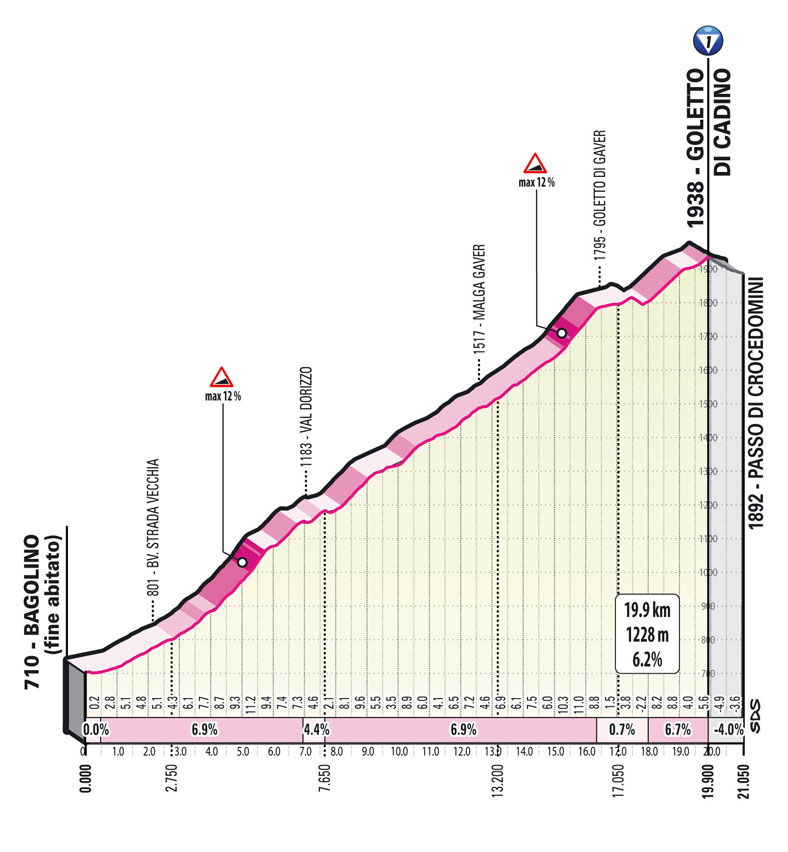 Passo del Mortirolo: GPM1, 12.6 km at 7.6%
The easiest side of one of the most iconic climbs in Giro history. 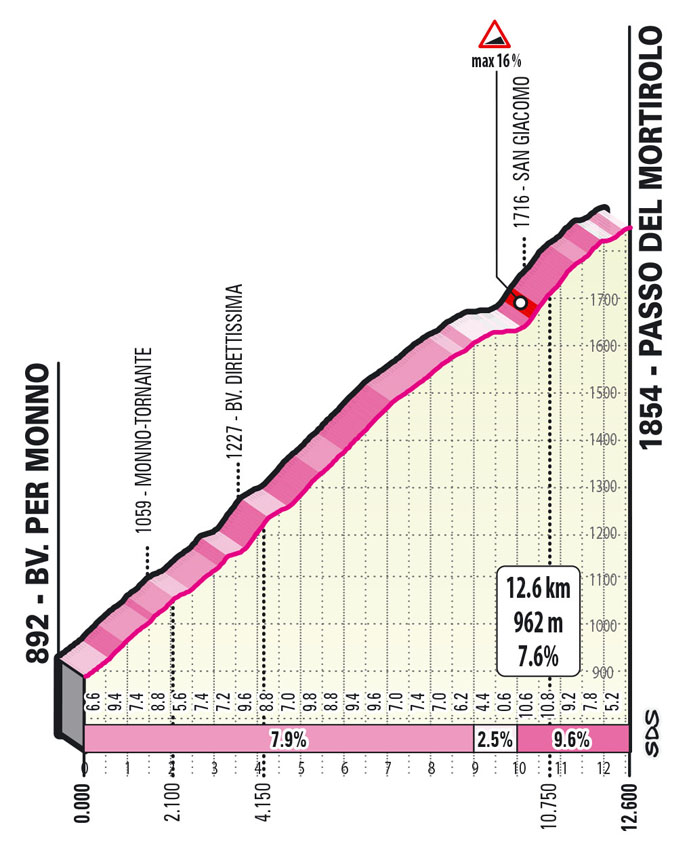 Teglio: 5.6 km at 8.2%
Here the answer of the 8-ball was “intermediate sprint”. We still have an official profile however, which is nice. And confusing. 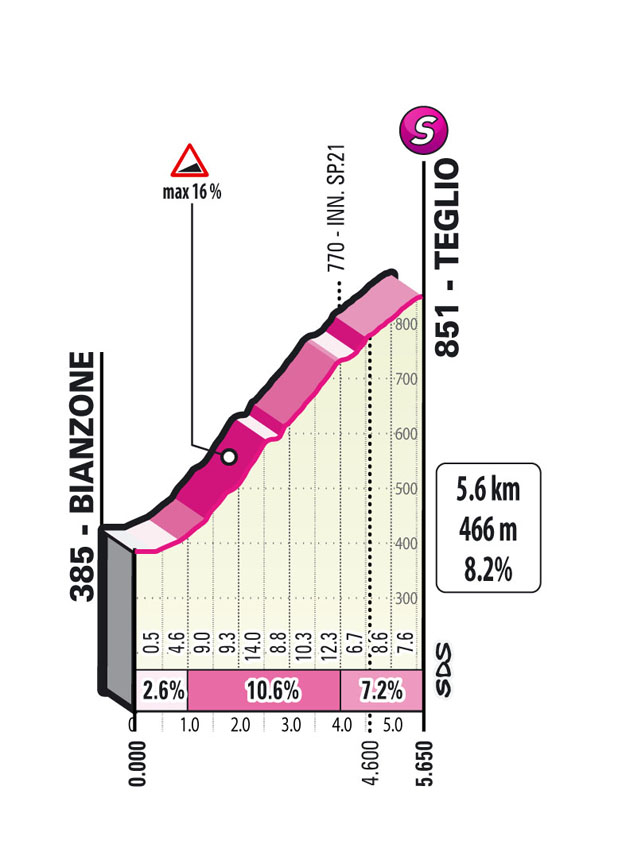 Valico di Santa Cristina: GPM1, 13.5 km at 8%
This climb is mythical since the 1994 stage, which all of you should watch if you never have. After that edition, it has been climbed only twice more, one in 1999 (but we don’t talk about that one) and one in 2010 (even going a bit higher, up to Trivigno). But it has never been climbed all the way from the bottom of the valley; this will be the first time. 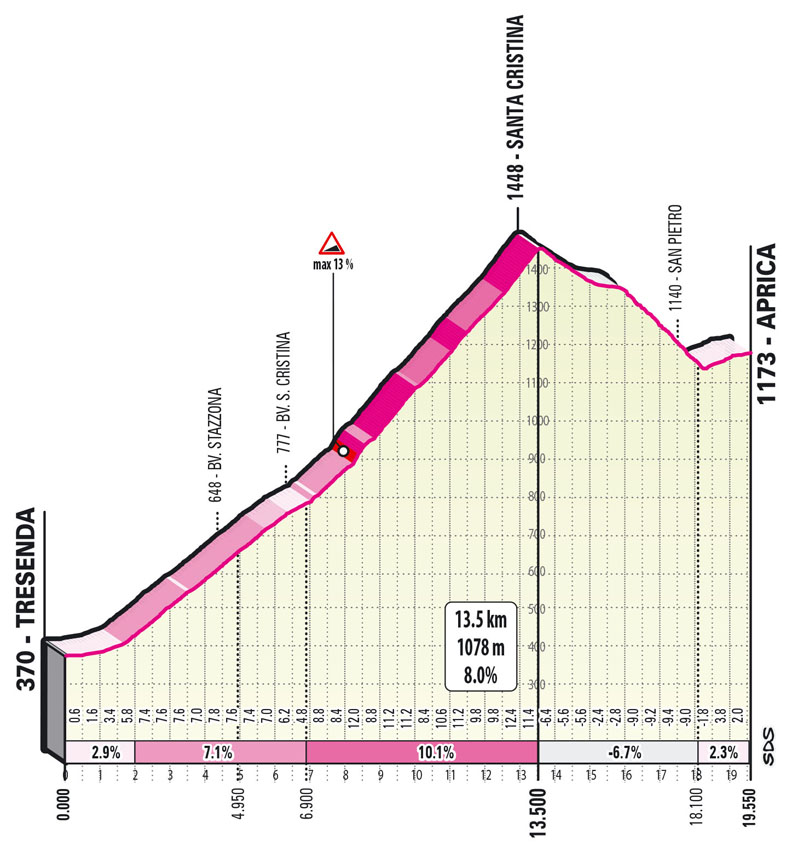 What to expect:
All out battle on the last climb, maybe action on Teglio if we are lucky. The first hour will be very important, what happens on the Goletto di Cadino will determine much of the rest of the stage. 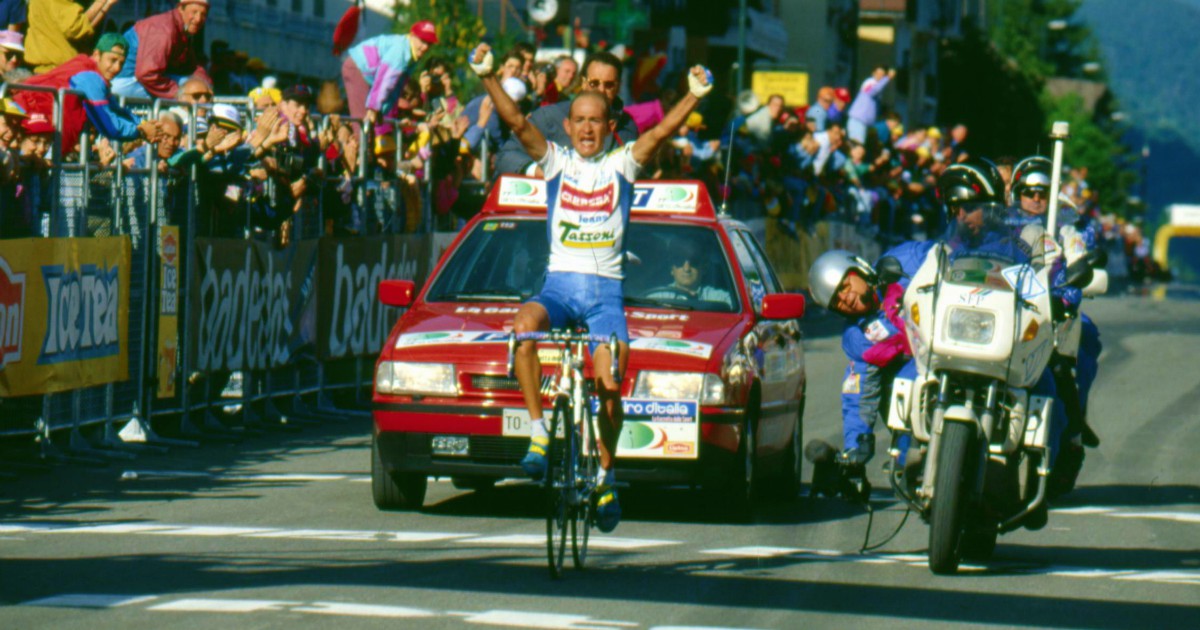 I'm going with Carthy (from a breakaway) here. The gradients suit him much better than today's stage.
Reactions: Sandisfan

Commentators couldnt shut the *** up about the "Mortirolo" stage.

The cyclists head from Aosta valley to very familiar Lombardian roads. One of the most important stages of the race. This time the weakest version of Mortirolo is served and it's also very far from the finish line. Together with Goletto di Cadino it should tire the cyclists though. No big GC action expected there but it's ok since there are still two difficult climbs afterwards. All-out fight on steep Santa Cristina (including almost 7 km at 10%) expected and crushing the peleton may already happen on tricky Teglio climb (with only short rest between those climbs). Last 30-35 km should be very interesting.
Reactions: Sandisfan 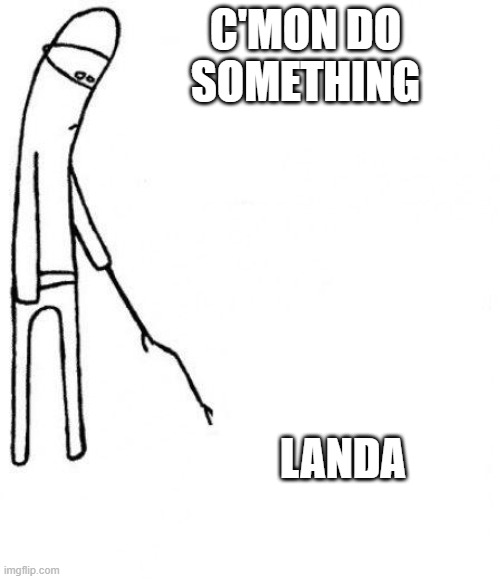 Clearly this is the Santa Cristina Stage but nobody's heard of that climb so sadly they have to hype it as the Mortirolo Stage
Reactions: Sandisfan
K

King Of The Wolds

Yates, from the GC group, rather than the break.
F

I don't see the break taking this, this isn't one of those B-team Giro/Vueltas where the favorites don't have a team strong enough to control the race. Mortirolo is a leg-sapper here but I'm more interested in seeing if anyone pushes it on the time sprint or the descent after.
Reactions: Sandisfan

Man would it make me happy if Nibali wins. But right now it kinda feels like we can't have anything good happen in the world of sports.
Reactions: DoYouEvenRideBruh, Sandisfan and PlanZ
S

Due to Netflix, I‘ve become quite a big fan of the likeable Carapaz.

But because he rides for Ineos, and has won the Giro already once in 2019, I hope for some action on Tuesday: a scenario which sees Carapaz crack just as Basso cracked on Stelvio in 2005, or Yates cracked in the third week in 2018. So I wish for a stage win for Hindley on Tuesday, and a 130th place for Carapaz, +45:00 minutes…
Reactions: JosefK and Sandisfan
H

This peloton will likely not attack until the final 3km climb to Aprica. Cannot afford to risk their precious 8th place finishes
Reactions: Fantastico, Ludwigzgz, Sandisfan and 1 other person

Hindley has looked strong. Ineos will out put the hammer down with Porte leading the train. Bardet would have been a great pick here. Too bad.

Valverde will be in the group on the last climb. So will nibali. Both neither will prevail. It's too steep for them.

Carapaz is good on these really steep climbs. If he is to be shook it needs to happen on the second climb. Almeida can't descent. Landa is a good pick perhaps for attacking there. Nibali will go with him.

I should definitely get a job as a speculator.

On Tuesday during a time period I’m usually busy but if the race goes long I can tune in for the final, I have a busier then usual day, so Hindley better win while I’m gone.
Reactions: Sandisfan
T

Surely a GC day? If Almeida again loses ground on the descents then whoever of the GC riders is up the road will surely work together to eliminate him from contention. Even if he's strong enough on the climbs, he could lose many minutes if he's dropped on the descent of the Mortirolo - and he's unlikely to have any teammates to help. if that jhappens then the pressure and co-operation of the GC riders will make it very difficult for the break to win.

Who wins the stage I don't know, but the combination of Nibali being (obviously) a great descender and being 3 minutes from Carapaz and Hindley (such that they don't really need to worry if he escapes in the last 30km and takes 30-45 seconds) makes me lean his way.
Reactions: Fantastico, danielovichdk2 and gregrowlerson
S

I would love to see Buchman show his climbing form of a few years back and go all in on this stage. I enjoy watching his climbing style when he’s on. But from what the CW here seems to be, I guess he should have done that when it’s warmer. I also thing it would be great for the race if he could take some time back and be a threat for the overall later in the week.
Reactions: Remy55

Coming after the rest day makes it even harder.
Not sure about the breakaway's chances. Not sure where can they build an advantage sufficient to hold on to it.
M

Some GC rider always pays dearly after the rest day especially on these types of stages. Expecting Bora and Hindley to do well as they are riding confidently and generally smarter than Ineos. Carapaz could be isolated on the final climb as Porte and Sivakov have been up and down and their descending can be a liability. Interested to see what Nibali and Almeida can do.. Be surprised if the break took this one. I expect Yates to take another stage win but not sure if it will be this one.
Reactions: Sandisfan, Cookster15 and SHAD0W93
R

Yates, Carapaz, Hindley, Landa plus either Bilbao or an inexplicable Ineos rider to go away. Yates to win and look suitably grumpy.
Reactions: danielovichdk2

Best case scenario for the racing: Bahrain puts someone like Domen Novak in the break, Poels and Buitrago blow the race open on Mortirolo and then Bilbao attacks on the descent taking Landa and a few other GC riders with him. They bridge to the break and Novak pulls hard in the valley. Then it's every man for himself.

But probably Bahrain is not desperate enough to try from distance?
Reactions: Sandisfan, Carrick-On-Seine and search

SafeBet said:
Best case scenario for the racing: Bahrain puts someone like Domen Novak in the break, Poels and Buitrago blow the race open on Mortirolo and then Bilbao attacks on the descent taking Landa and a few other GC riders with him. They bridge to the break and Novak pulls hard in the valley. Then it's every man for himself.

But probably Bahrain is not desperate enough to try from distance?
Click to expand...

I don't think the explosion Bilbao survives would be devastating enough.

This side of the Mortirolo is relatively easy, but that won't spoil the fun. It's a stage with four tough climbs. That short but Steep Teglio might play a crucial role. The final climb will be exhausting at the end of such a demanding stage. I hope the GC riders won't ride too conservatively out of fear for the next days.

This might be the stage where Ineos and Carapaz smack down the opposition. Somebody from the top 6 will lose a lot of time - possibly Almeida. Hopefully Landa finds his best legs, because this is the type of stage that suits him and he's less than a minute behind. A good Nibali would also add suspense. Cancel all appointments and stay home to watch this!
Reactions: Sandisfan and saunaking
You must log in or register to reply here.
Share:
Facebook Twitter Reddit Tumblr WhatsApp Email Link