Page 23 - Get up to date with the latest news, scores & standings from the Cycling News Community.
Sidebar Sidebar
Previous Next
H

But they love him in the GCN studio
Reactions: Sandisfan, Jumbo Visma Fan :), TourOfSardinia and 1 other person
N

Mayomaniac said:
Meida really lost over 1min, according to the RAI motobike he was asking for a gel to eat on top of the climb and cracked on the false flat afterwards, no longer able to push his biggest gear. Maybe a hunger knock.
Click to expand...

That wouldn't be the first time for him :O
Reactions: Sandisfan
S

Hindley seems stronger, but he only needs to sit tight and drop Carapaz in the final kms of Fedida and with bonus seconds it could be enough to make a buffer he can survive in the ITT
Reactions: Sandisfan and roundabout
B

Nibali at 6 minutes back is ideal for a stage win!
Reactions: Sandisfan

Tbf Wiggins probably thinks he was born in the Netherlands himself.
Reactions: Sandisfan, Monte Serra, Carrick-On-Seine and 2 others

Gigs_98 said:
I really want to know what Almeidas gap was at the top of the climb
Click to expand...

If you want that kind of information, next time you stake out at the top of the climb!

Brullnux said:
Nibali at 6 minutes back is ideal for a stage win!
Click to expand...

And all the guys who were behind him on the gc and in the same group lost even more time than him today...
E

Hirt with two breakaway days now only 1:24 away from a TOP 5 GC.
Reactions: Sandisfan

Devil's Elbow said:
Hindley is doing exactly the same and tbf the parcours incentivises this kind of racing with little TT and final climb-centred mountain stages. Such a poor edition.
Click to expand...

Remember the objections to the comparison to the 2012 and 2014 routes before the race?

saunaking said:
Hindley seems stronger, but he only needs to sit tight and drop Carapaz in the final kms of Fedida and with bonus seconds it could be enough to make a buffer he can survive in the ITT
Click to expand...

The fact that this is a genuinely possible strategy is such a damning indictment of this route. While racing everywhere else has become more attacking in recent years, GTs have become worse and it's entirely related to a really poor slate of GT routes in recent years.
Reactions: bob.a.feet and Rollthedice

He would not be able to hold a gap on his own today, and why should he then commit more to the group than Carapaz did?
Reactions: Sandisfan and Carrick-On-Seine 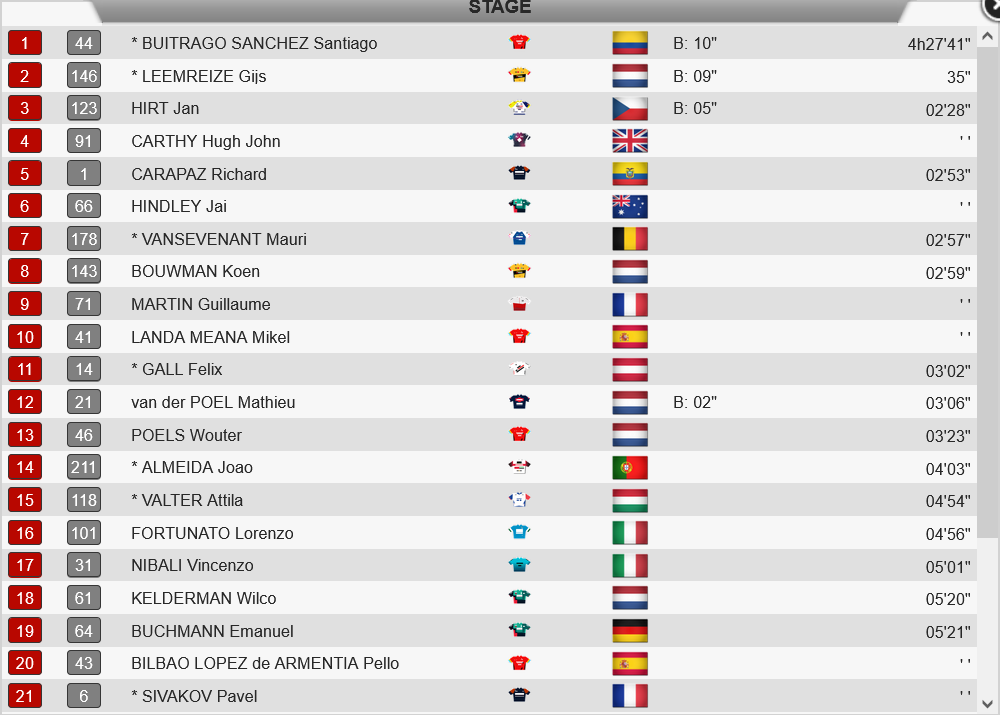 Don't tell me Valverde is still 9th or 10th on GC?
Reactions: Sandisfan

Netserk said:
Remember the objections to the comparison to the 2012 and 2014 routes before the race?
Click to expand...

Yes, sadly that's what a lack of kms of ITT does to the race.
Reactions: Lui98 and Brullnux

Brullnux said:
You have to think that Landa and/or Hindley go long range on Friday? Or try to properly go Carapaz? Ineos aren't strong but they're unable to gap Carapaz uphill, and the TT is a bit unreliable
Click to expand...

I would think if Carapaz is capable of it, he'll want to go himself to make a point.
Reactions: Sandisfan
D

It seems that Landa can't compete with the other 2 in terms of explosivity & sprinting. His only option to win the race is to go on a long rang attack on Friday or Saturday.
Reactions: Sandisfan

Fantastico said:
I care more for the GC guys as well, but that's super disrespectful.
Click to expand...

Well, I wouldn't say that so his face and it has nothing to do with him, its just how I feel about a race where the best riders dont care about stages and the producers rarely show images of the leading group. I literally could not care if it him him, Buitrago or a 3rd rider. I would have forgotten that in a week. Simply put, its not what I tune in for. I know some people care a lot about that stuff - well, I don't. Theres no point for me to tune in if thats all what Im getting. I might as well read the results on PCS or somewhere else, because I learn close to nothing about the race I really care about (the GC) watching the images they are giving me.

Anyways, enough ranting for today. Its probably a tune in with 14 km left on Passo Fedaia-angle and pray to the cycling gods that the break will be caught by then so they don't have to waste 80% of their time showing images of some decent to good climbers fighting it out instead of trying to show us who's actually winning the overall race.
Reactions: gregrowlerson

Three dudes incapable of dropping each other and only marginally dropping the fourth are dragging their bikes through Italy hoping to take home a sweaty pink colored jersey to their loved ones. I kind of prefer to see a Slovenian coalminer and a compatriot ski jumper.
Reactions: Sandisfan, Didinho, UselessToo and 4 others
M

Think Hindley will have trouble gapping Carapaz. That said, he's obviously riding well. Think Landa is riding for third at best. cracks starting to show for Almeida which will be a relief to the riders in front of him re the TT. Gutsy ride by VDP and a well taken win by Sanchez. Poels didn't leave anything in the tank for his team. Hindley probably has to do the TT of his life to win the race as Carapaz is looking better than he did earlier in the race.
G

Devil's Elbow said:
The fact that this is a genuinely possible strategy is such a damning indictment of this route. While racing everywhere else has become more attacking in recent years, GTs have become worse and it's entirely related to a really poor slate of GT routes in recent years.
Click to expand...

Also, 3-week competitions are a relic of the past now. I look at them as I look at some 3-day cricket match. Out of this world.

The accordeon guy has no explosiveness whatsoever, I keep rooting for him for years but honestly I don't know how he will ever win a race of his level
Reactions: Sandisfan

wheresmybrakes said:
Don't tell me Valverde is still 9th or 10th on GC?
Click to expand... 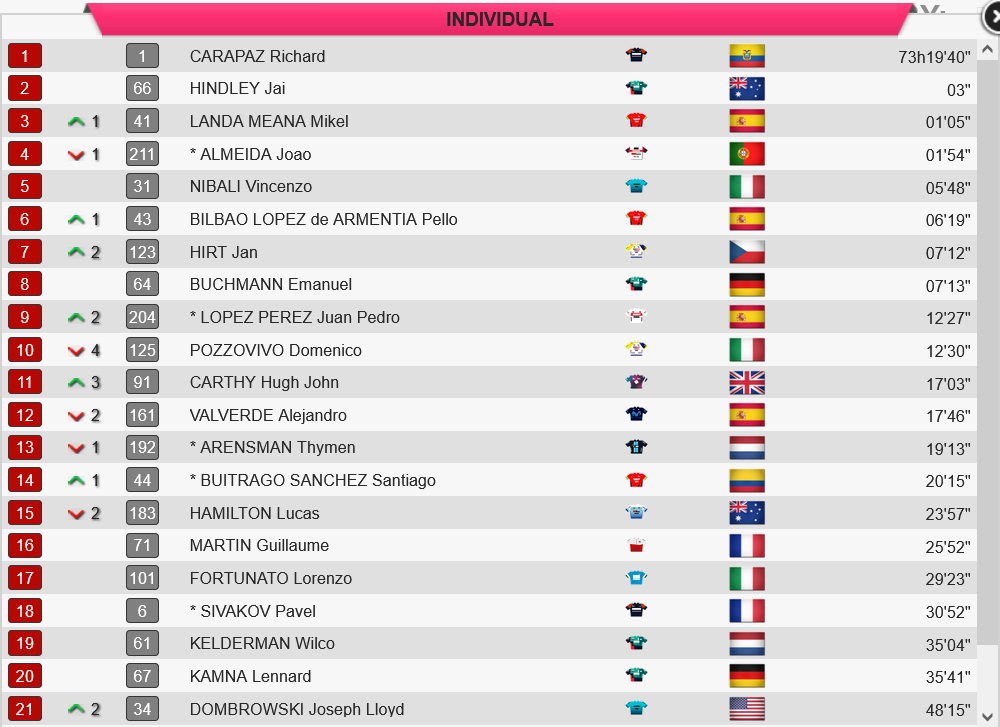 So MVP strikes again! But he came short again (despite gaining on a descent), big mountains are not for him. Third time lucky for Carthy? No, he lost from the breakaway again, for the 3rd consecutive mountain stage. Great finish by Buitrago, after Sunday's 2nd he's the best today. The same guys are in breakaways all the time, Hirt being another example.

As for GC guys, the Big3 almost unseparable again (except last meters). They will be on podium probably and the fight between Carapaz and Hindley will be continued until the very end. Almeida prefered bigger distance than 20 meters today and he lost the Giro as well as the podium (probably, given two mountain stages remaining).

Brullnux said:
Nibali at 6 minutes back is ideal for a stage win!
Click to expand...

Every silver lining has a cloud
M

spalco said:
People talked about it here, but the TV production ignored it entirely.
Click to expand...

The Giro TV coverage has definitely faltered in the past few editions . They just miss so much of the action. Maybe they have a new TV producer ?
Reactions: Sandisfan
You must log in or register to reply here.
Share:
Facebook Twitter Reddit Tumblr WhatsApp Email Link