Ricco' said:
Valentino Sciotti (boss of Vini Fantini company) says that he also gives up of cycling, after Androni said that they will pull the plug.
Click to expand...

Damn, so we might lose two more Italian teams
Hopefully the Silver Fox can pull a big rabbit out of his hat one more time

Ricco' said:
Valentino Sciotti (boss of Vini Fantini company) says that he also gives up of cycling, after Androni said that they will pull the plug.
Click to expand...

Damn, so we might lose two more Italian teams
Hopefully the Silver Fox can pull a big rabbit out of his hat one more time
Click to expand...

If there just was a cycling loving oligarch that lives in Italy and strangely enough gets along quite well with other controversial characters. Oh wait ... :lol:

Alexandre B. said:
Direct Énergie (Coquard) not invited for Milano-Sanremo.

Could this be related to Demare's holding onto the car incident.
Click to expand...

I dont think so, Demare rides for FDJ
Click to expand...

That's my very point - FDJ a WT must be invited - But not Direct energie a PCT.
Click to expand...

If this was related to the Démare incident then why are Cofidis invited to the race? Direct Energie haven't started the race since 2014 so it's not really that surprising that they aren't in the race this year.
Click to expand...

Bouhanni rides for Cofidis - He is a chance in MSR.
M


hazaran said:
Wait, Porte? I don't think he is doing the Giro.
Click to expand...

He must have meant Van Garderen, also König rides and not Majka
M


staubsauger said:
All that ****** talk about being Italian ain't enough to secure a Giro wildcard. And then they invite Wilier Triestina mainly because their team leader is Marcezko! Pathetic.

At least Savio used his riders to attend sponsors for his team. Wilier was involved in pay to ride heavily as well. Yet, only Savio pays the check.

Bernal and Torres alone should've been enough to invite Androni Giocattoli to animate the mountain stages. That team honored the Tour of Italy in so many editions. What has YelloFluo done for the race since 2013? Just like nothing!

That's almost certainly the final nail in the coffee for Gianni Savio. CCC & Wilier Triestina instead of Androni Giocattoli ain't no good at all!
Click to expand...

Mareczko is the biggest italian sprinttalent, with a huge potential, and in a sprinter-country like Italy he is someone who should matter a lot in the selections, and also Pozzato is still a big name, undeserving or not.

Androni has Gavazzi who gets many CQ-points, but honestly is a quite mediocre standard italian type rider rider who is not really an attraction and does not add anything to the race. Williers Busato and Fedi should be just as fine.

Then Torres and Bernal could be nice to see in the mountains, but Bernal is still too young to really matter and Willier also has D. Martinez that has sort of the same apeal and then Torres rarely hits his topform and has not done much in his first 2 grand tours so he is not really that important.

So for me Willier clearly deserves the wild card more than Androni, but in a italian race Androni should normally have had the wild card CCC got.


yaco said:
Bouhanni rides for Cofidis - He is a chance in MSR.
Click to expand...

Edit: I now realise Cofidis are a sponsor of the race so guess they will always get an invite. I still don't think the Demare incident has anything to do with Direct Energie not getting an invite, they didn't get an invite in 2015/16 so no surprise they didn't get one this year.

Just realized that if they'd downgraded the number of riders on a team to 8 like originally intended, RCS easily could've invited 24 teams with still having a smaller field in total.

Somehow I doubt this wildcard saga is all over. After all the UCI screwed RCS big time with forbidding them to go down to to 8 man teams on one hand. But on the other hand they clearly broke arrangements when they gave an undeserved wt place to a crappy team like Dimension Data that only blocks a place at the Giro. Only because of backroom politics between UCI & ASO.

If Vegni has any kind of guts like Zomegnan used to have he - and probably the Italian Federation as well - well seek the UCI to downsize team numbers to still invite Nippo & Androni after all and threat them to kick out DD otherwise.

That's what I expect actually.

Alghero is already revving up for Giro:
Lighting up the old Tower by the see - all PINK.


TourOfSardinia said:
Alghero is already revving up for Giro:
Lighting up the old Tower by the see - all PINK.

They did that in pretty much all the towns that will have a stage start or finish, even my homwtown. 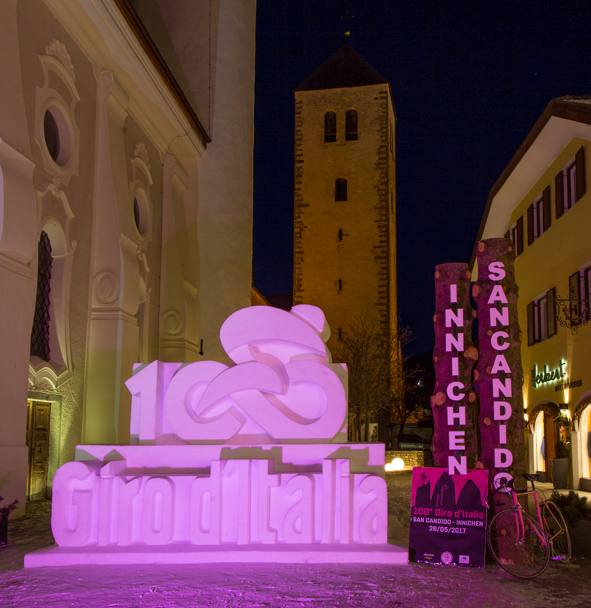