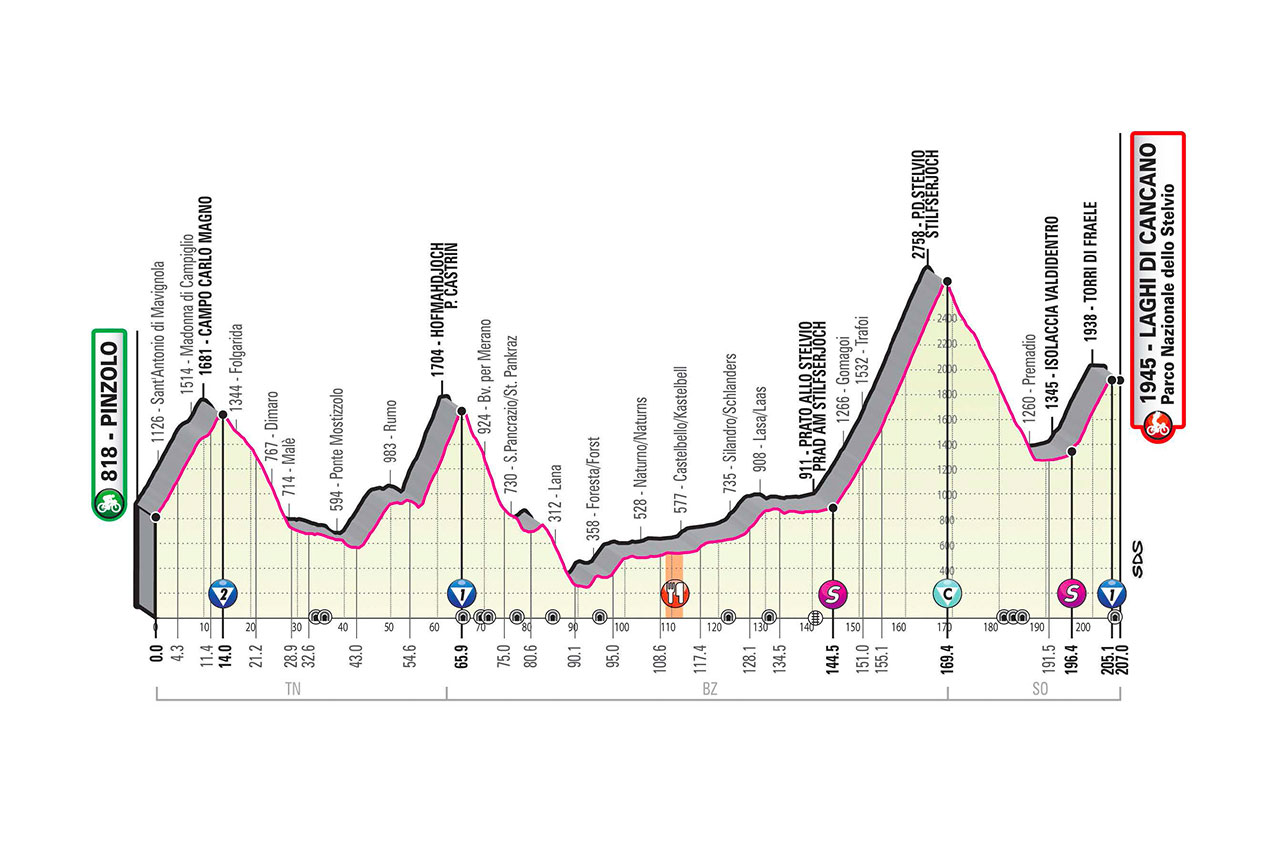 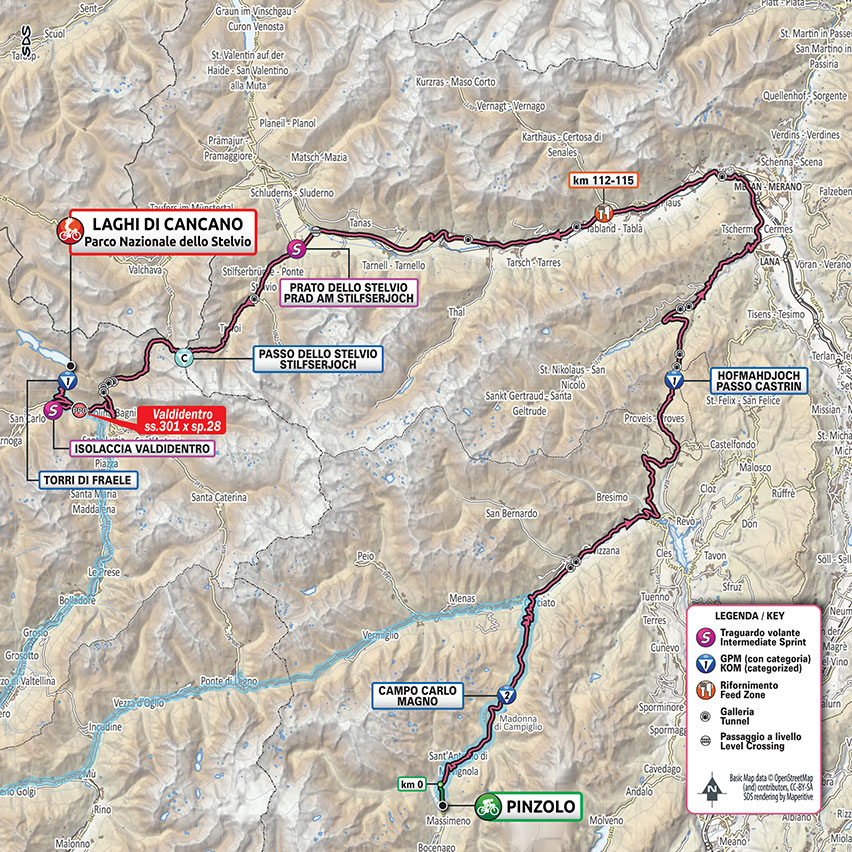 Technical Overview:
Here comes the queen stage of the 2020 Giro d’Italia, on stage 18, quite the unusual spot for Giro standards. It’s also one of only two GC-friendly high mountain stages, and the best stage for a long-range attack. From Pinzolo to the Lakes of Cancano, a never used finish that was due since quite a long time. The stage starts at the foot of yesterday’s last climb, which means the peloton will get to climb it again. This time, all the way to the top of Passo Carlo Magno (GPM2, 13.8 km at 6.3%), 3.5 km further up the road after Madonna di Campiglio. All in all, a solid climb, more than enough to create a strong break of the day.
The descent is very fast on wide roads, and leads down to the Val di Sole, where the riders will find 14 km of descending false flat. After that, the second climb of the day starts: Passo Castrin (GPM1, 8.8 km at 9.1%) has never been used before in the Giro. It would definitely do some damage if it was further down the stage, but being this early they will only be good to wear legs down, and maybe force a selection in the breakaway. Its descent is long (almost 25 km) but fairly fast and straightforward. It leads to the outskirts of the town of Merano, and subsequently to a short climbing section that brings to the long Venosta valley. Here the peloton will encounter 45 km of ascending false flat, with some demanding sections like the one after the town of Silandro.
At the end of this false flat lies the town of Prato allo Stelvio, where the first intermediate sprint is and the Cima Coppi of this edition (and many others) begins. The ultra-mythical Passo dello Stelvio (CIMA COPPI, 24.7 km at 7.5%) is a monstrous climb that is finally faced from its hardest side, for the first time since 2005. It’s the highest paved road in Italy and probably also the most iconic, especially on this side, with its 48 hairpins along 1850m of altitude gain. Its gradient is rather constant, in particular after Trafoi, always between 8-10%, without any respite for 15 km, all of this at high altitude. This is obviously the best spot for a long-range attack of the whole Giro, as the top is at 37.6 km to go, with a long and technical descent ahead. The descent itself might be a good spot to attack too. It is roughly 20 km long and features a lot of hairpins, with some very technical sections. The riders will not go all the way down to Bormio though, as they will turn right around one km before the town and head immediately towards the Valdidentro valley.
Here the riders will face roughly almost 10 km of flat before the next climb, something that is the only gripe I have with this stage, as a few of those kms are unnecessary: the route could enter the next climb much earlier, but instead the organizers decided to go all the way to Isolaccia, the second intermediate sprint of the day, and only then enter the final climb. A final climb which is a beauty. Torri di Fraele (GPM1, 8.7 km at 6.8%) is not an incredibly tough climb like the Stelvio, but it is arguably just as pretty. Its upper part features a series of 17 hairpins, one on top of the other, that will provide stunning views and hopefully stunning racing as well. If nothing happened on the Stelvio (God forbid), this climb will decide the winner. The top however is not at the finishing line, but 1.9 km before. This final stretch is mostly flat, with some very gentle slopes in both directions. 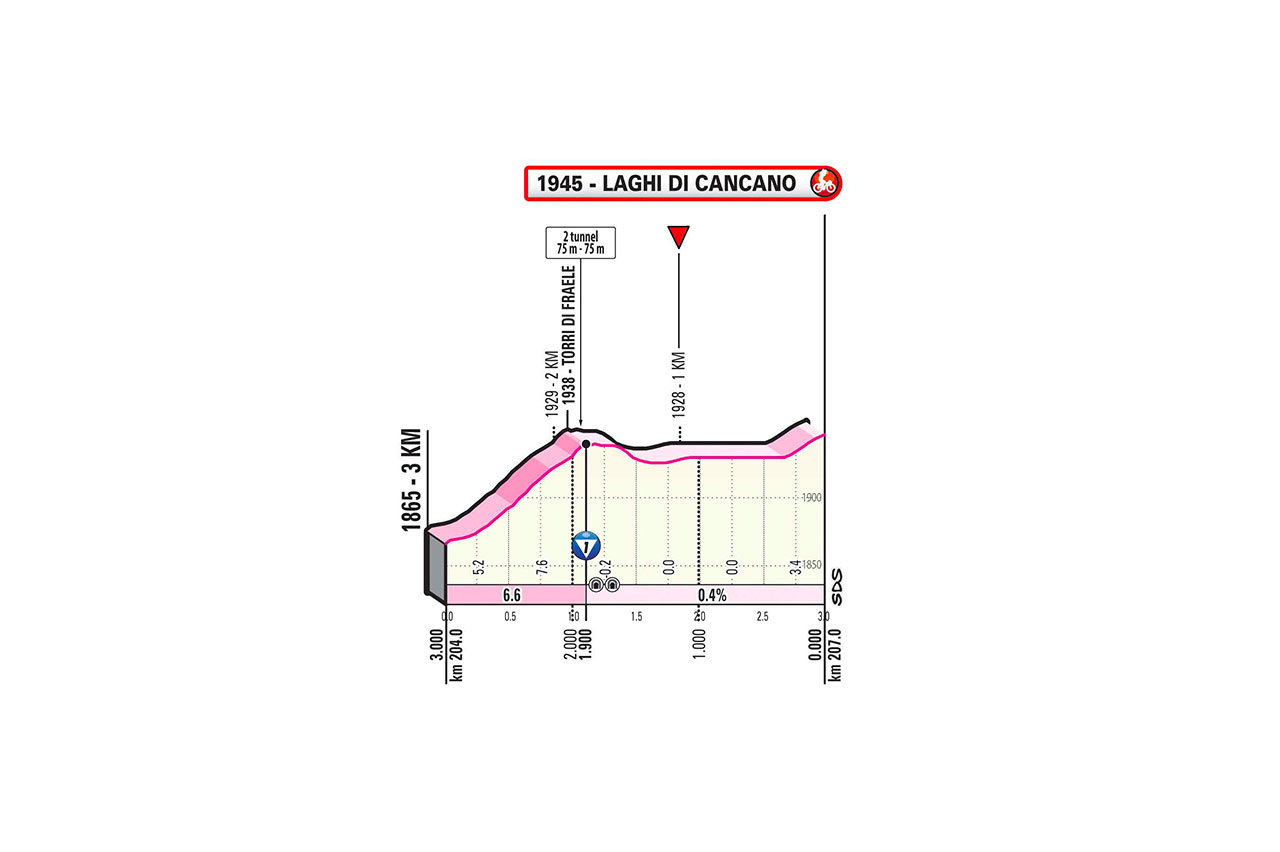 The Climbs:
Passo Carlo Magno: GPM2, 13.8 km at 6.3%
Basically the climb to Madonna di Campiglio from yesterday, plus 3.5 km with similar gradients. 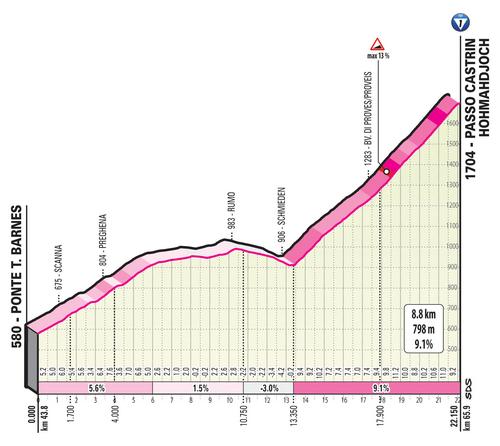 Passo dello Stelvio, CIMA COPPI, 24.7 km at 7.5%
His majesty, the highest paved road in Italy. First climbed in 1953, when it witnessed one of the last feats of Fausto Coppi, it was also the first climb to be dubbed “Cima Coppi” in 1965 to give homage to the recently fallen hero. From there on, the Cima Coppi title was given to the highest point of each edition. This will be the 13th time the Giro climbs it, if the weather allows. 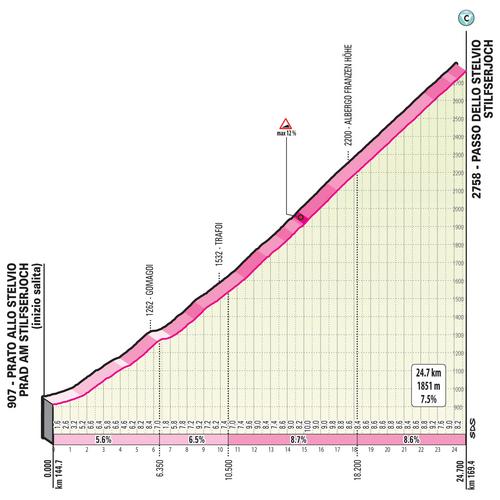 Torri di Fraele: GPM1, 8.7 km at 6.8%
New climb, looking very pretty and with a decent gradient. No matter what happens before, it will provide great views and a great spectacle. 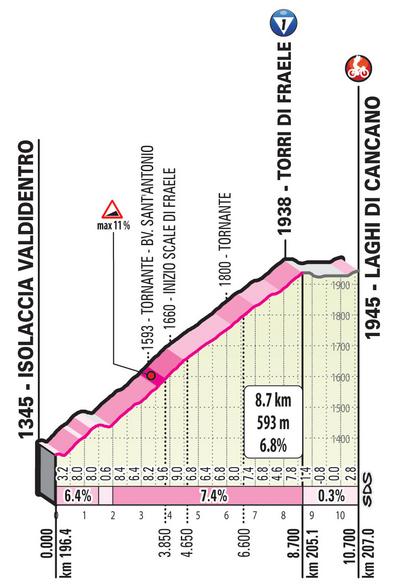 What to expect:
Well it’s the queen stage, and there aren’t many opportunities for pure climbers to gain time in this edition, so they have to use what they get. Big fight to get into the break of the day, then calm before the storm on the Stelvio. At least a huge selection there (if not full-blown attacks), and then everyone by themselves on Fraele. Legs are sore and tomorrow is a relatively easy day…

Edit: I actually wanted to make a serious poll about who will win, with Antonio as the only joke option. I pressed enter thinking I could then enter the next poll option but turns out that when you press enter while making a poll, the window closes and the options you've entered so far are the only ones. Of course I could have edited the poll again but seeing only those two options, it just felt like it was meant this way. So yeah, Antonio or Vincenzo?
Last edited: Oct 21, 2020
Reactions: baojoao, Sandisfan, repre and 3 others

Ballerini to win the intermediate sprint at the bottom of the Stelvio without even noticing it.
Reactions: Carrick-On-Seine and Samu Cuenca
R

Ugh, get that garbage out of my precious, beautiful thread.
Reactions: glassmoon, Krokro, Sandisfan and 12 others
R

Gigs_98 said:
Ugh, get that garbage out of my precious, beautiful thread.
Click to expand...

Here's what will happen.

Reactions: baojoao, Sandisfan, Jungle Cycle and 7 others
B

I sense that this is meant to be a joke but I don't get it
Reactions: Sandisfan

Gigs_98 said:
Ugh, get that garbage out of my precious, beautiful thread.
Click to expand...

That side of Sestriere isn't that bad, it's the final 6.5km of this climb.

Still, let's talk about tomorrow, they are climbing the most iconic alpine pass, it's the mountain pass.

Mayomaniac said:
That side of Sestriere isn't that bad, it's the final 6.5km of this climb.

I hope they'll descend that side and climb the classic.

I remember in 2016 when things were looking really bad for Nibali I jokingly predicted him to make a huge comeback after an attack on the Agnello and well we know how that turned out.

On another note, I totally jokingly predict Nibali to make a huge comeback after an attack on the Stelvio.

I took a day off because that's truly one of the most beautiful climb in the world and I couldn't miss it.
But at the moment I'm kind of afraid nothing will happen.
Reactions: Krokro, Sandisfan, Tonton and 1 other person
D

By the way, ridiculous that they don't at the very least put in the steep side of Pramartino before the Sestriere laps.
Reactions: Sandisfan and Forever The Best
R

Mayomaniac said:
Still, let's talk about tomorrow, they are climbing the most iconic alpine pass, it's the mountain pass.

I was in the area around Bormio in Sept '19... What an epic climb!!! You gotta be there to see and experience it yourself
F

I have a Linear Algebra course tomorrow between 10.30-13.30 GMT, hopefully I catch Stelvio.
Reactions: Sandisfan

Give unto me the chaos and carnage for which we hath waited oh god of cycling
Reactions: Krzysztof_O

Brumdog66 said:
I sense that this is meant to be a joke but I don't get it
Click to expand...

Nobody does.
Reactions: Bye Bye Bicycle, Sandisfan and JosefK

Last chance saloon for everyone vs Almeida (and Kelderman)

Gigs_98 said:
I remember in 2016 when things were looking really bad for Nibali I jokingly predicted him to make a huge comeback after an attack on the Agnello and well we know how that turned out.

On another note, I totally jokingly predict Nibali to make a huge comeback after an attack on the Stelvio.
Click to expand...

I can't remember...did you watch the Agnello stage back then in 2016? Are you watching tomorrow's stage? If the answer for the latter is "yes", can I ask you why?
Reactions: Krokro and Sandisfan
S

As always, Stelvio will separate the real contenders from the rest of the GC field. No tactics will work, no train can survive, the only factors are in your lungs and your legs.
Reactions: savornin
I

solo80k said:
As always, Stelvio will separate the real contenders from the rest of the GC field. No tactics will work, no train can survive, the only factors are in your lungs and your legs.
Click to expand...

Everything this Giro is so 2012
Reactions: Sandisfan, Summoned, JosefK and 4 others

Sad I probably have to miss this. What time will they hit the Stelvio most likely?
Reactions: Sandisfan
S

Never watched a stelvio stage live. Going to stay up until 3am my time to do this.
COME ON
Reactions: TourOfSardinia, Sandisfan, repre and 3 others
I

Red Rick said:
Sad I probably have to miss this. What time will they hit the Stelvio most likely?
Click to expand...

Just checked the schedule. They hit Prato between 14:00 and 14.30 CET.
I get out of work at 14:30 and have a 1h commute. Unfortunately, I'm not @Gigs_98.
Reactions: Red Rick
You must log in or register to reply here.
Share:
Facebook Twitter Reddit Tumblr WhatsApp Email Link