Welcome to the zombie race. Last held in 2019, everyone thought this race was dead, until ASO suddenly resurrected it a month ago. Sadly, no live footage of this unexpected move exists, in spite of the roadbook claiming the race will be broadcast in '190 countries across the world' (spoiler alert: it isn't).


Random thought because there isn't much to talk about in terms of the route: why do ASO call things 'climb of [insert Arabic name here]' for this race but insisted on using 'Côte de something' in Tour de Yorkshire?

Otherwise, this is the same slightly uphill 870 metres to the line as in 2019, the only other time this finish has been used, however that time it was the triple Bousher al Amarat stage that finished there.


There are two points marked with a warning sign in the final kilometres map, which makes this a technical finish by Middle Eastern standards. Otherwise, nothing to note here. 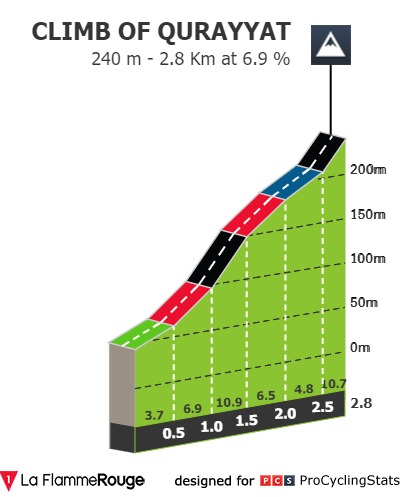 
After 2019's edition with the finish 27 kilometres after the final climb, this is much more similar to the finale in previous years. The highways on which the race takes place makes successful attacks like in the early years of the race (Froome won this stage in 2013 by outsprinting Contador and Rodriguez) quite difficult, recent editions have had sprints of 20 to 50 riders.

This is the side they climb twice: 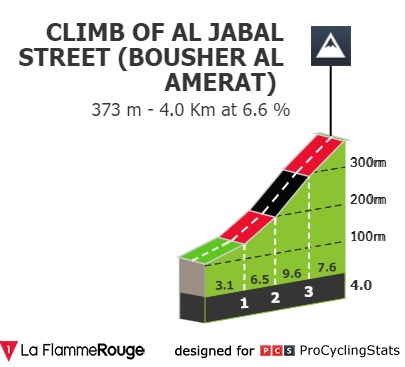 And this is the one they climb in between: 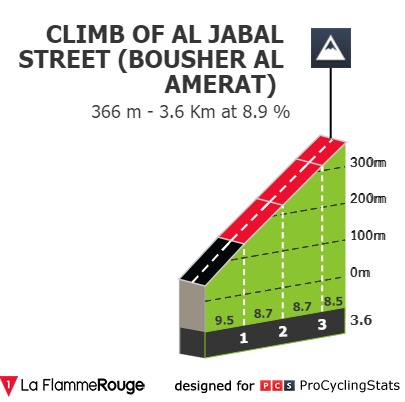 
We all know the drill at this point. The road goes all the way to above 2000 metres, but the only time they've climbed further than the usual finish, repeated this year, was in 2016 and even then they didn't go all the way to the summit. Either way, here's a profile. A day for pure climbers like Alexey Lutsenko, of which there are none on the startlist. 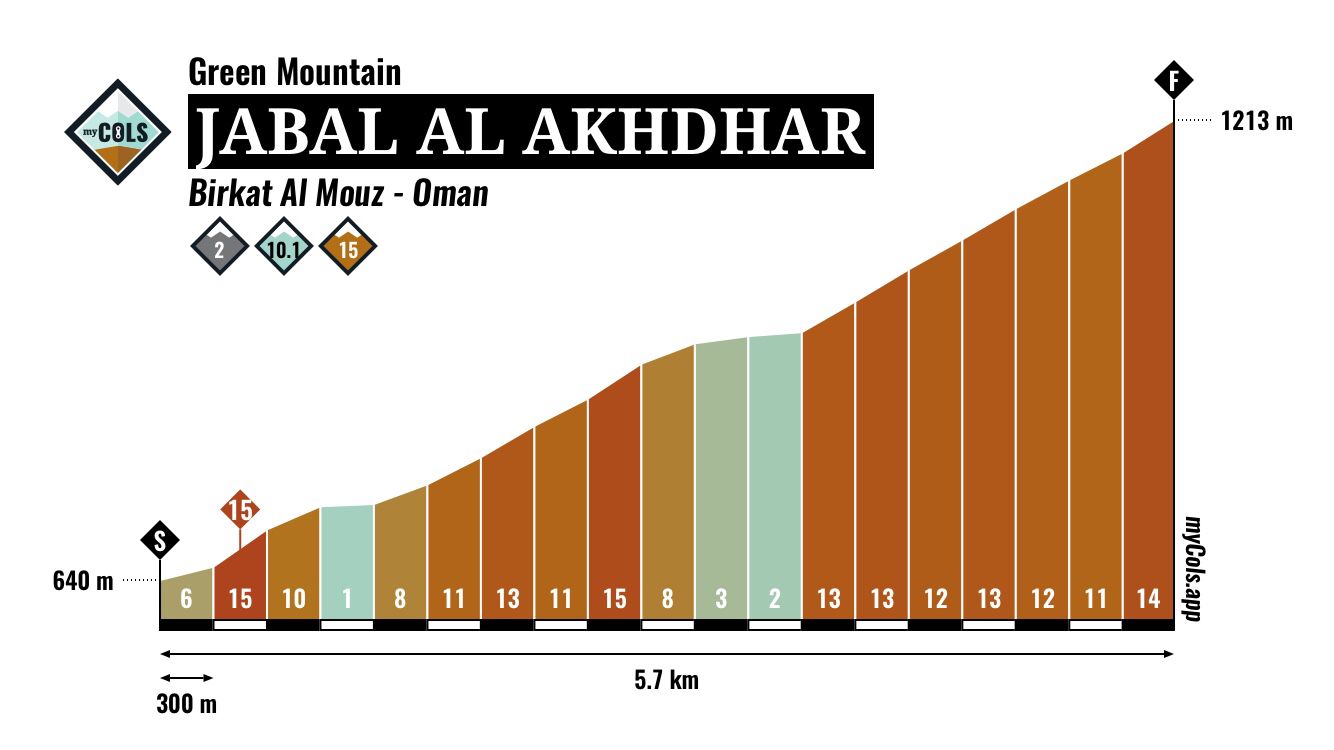 
As every self-respecting dictator knows, cycling races should end with the same parade stage through the capital every year, so that's what we have.
Reactions: Jungle Cycle, postmanhat, Sandisfan and 1 other person

This is the Tour of Utah of the Arabian Peninsula. I can't put my finger on quite what it is, but it's just got something that Abu Dhabi/Dubai/UAE, Saudi Arabia, Sharjah Tour don't. Qatar was slightly different because that was purely flat so was all about the cross-winds, but everybody else seems to have been going the same direction with their routes, and Oman just offers a more varied and interesting race even if it's still a fairly middling pre-season event. Would prefer stages 4 and 5 to be the other way around and maybe a 15km or so ITT instead of either stage 2 or 6, but apart from that it's a pretty well-drawn up race for what it has to work with, bearing in mind they always keep it largely close to the coast around Muscat. I also think the amount of Jebel al-Akhdar they climb is right - sure they could climb up to the summit, but that would make it even more of a one-stage stage race.
Reactions: postmanhat and Sandisfan

I agree. it's got something more. But I can put my finger on it: natural beauty.
Reactions: Sandisfan

I worry for the riders on stage 6. There are some gradients that have more than -90 degrees. I think they are going to fall hard to the ground.
Reactions: Unterlenkerfahrend, Newcomer, SHAD0W93 and 1 other person

Highlights are being shown on GCN app.
E

30 km to go, looks like the expected bunch sprint. Interesting was, that DSM rode the little climb 40km from the finish hard and tried to reduce the field..

wheresmybrakes said:
Highlights are being shown on GCN app.
Click to expand...

Even when there's footage, you can't actually see anything. Good to see Gaviria backing up the talk, though.

Devil's Elbow said:
Even when there's footage, you can't actually see anything. Good to see Gaviria backing up the talk, though.
Click to expand...

Well I liked the aerial view in the last km. Bad thing was that it stopped 50 m before the finish line..
Reactions: Sandisfan

Cavendish looks the fastest - Gaviria got a perfect lead-out, while Cavendish was badly out of form.
Reactions: SHAD0W93

The Hegelian said:
I agree. it's got something more. But I can put my finger on it: natural beauty.
Click to expand...

And that's without even including probably the two most interesting parts of Oman, Musandam and Salalah. Sadly neither area will ever make it into this race though.

That's the only way that Gaviria can win!! LOL.
Reactions: Sandisfan, SHAD0W93 and Ilmaestro99

Good win for Gaviria especially when it took so long last year to get one, perfect leadout by UAE, Cav with good legs after all the off-season turmoil and couldn’t come back being a rider behind on the little uphill, and surprising that Quickstep had 4 riders and leading the peloton hitting the 1 km to go and suddenly getting swapped in a not strong sprint train field.
N

Richeze is still the best lead out along with Mørkøv, incredible that they are forcing him into retirement after the Giro and if it wasn't for Hodge injury he wouldn't have even been here. If I were a TM from a team with a good sprinter I would do everything in my power to sign him.
Reactions: Sandisfan, postmanhat, Wyndbrook and 3 others
L

Costa 12 seconds bonus with Masnada. This is important. Costa uphill is faster in sprint than Masnada.
Reactions: Sandisfan