ILovecycling said:
why should he worked with Konig?
Konig was going for places in GC,Majka obvious stage win with no GC threat,Konig would have pulled alone anyway.
Click to expand...

They ended 10 or so seconds behind Nibali. If he would've pulled, maybe they could've sprinted for victory. Otherwise, it's also pretty much not done unless you're protecting a leader or someone up the road.

Pretty low action in my and most people's books.

Jagartrott said:
They ended 10 or so seconds behind Nibali. If he would've pulled, maybe they could've sprinted for victory. Otherwise, it's also pretty much not done unless you're protecting a leader or someone up the road.

Pretty low action in my and most people's books.
Click to expand...

bolded...plus like I said,he wasnt good enough imtoh Konig is impressive,such a talent and great wildcard by ASO

ILovecycling said:
Konig pulled 100%,he (majka) probably wanted to save energy and attack in last km,but obviously wasnt that strong,nothing to do with tactics imo.
Click to expand...

He did not try to do anything apart from outsprinting König for 2nd, pretty difficult to win a stage that way.

roundabout said:
Didn't seem to want that stage win when Nibali attacked, did he?
Click to expand...

Nibali attacked? Seemed more like the others just couldn't hold his wheel. Maybe I misremember things.

But yeah weird that Majka didn't pull after that or put in a dig to try and follow Nibs (unless he was on the rivet ofc).

Attacked was probably a wrong choice of word.

roundabout said:
Ok, got a gap.

Attacked was probably a wrong choice of word.
Click to expand...

I think Nibali would've been fine with doing a Mosq/Santa with König (who then by law of nature later would test positive and the win handed back to Nibali ), but Majka probably spoiled that. That said, I do think he rode away accidentally.

Netserk said:
I think Nibali would've been fine with doing a Mosq/Santa with König (who then by law of nature later would test positive and the win handed back to Nibali ), but Majka probably spoiled that. That said, I do think he rode away accidentally.
Click to expand...

Those guys were a bit slow, Valverde/Pinot were only, I think 20 sec. down so he just accelerated.

TJ vs. Purito will fight for the win!

cineteq said:
TJ vs. Purito will fight for the win!
Click to expand...

Miburo said:
I agree with the nibalifans. Contador wouldn't be able to do anything against nibali.

This all should be ignored. Nibali is the best!!

And Froome, meh nibali would have crushed Froome cause he has better bike handling skills.

But still some nibalifans were happy Contador crashed. It's the bike handling skills, too good.
Click to expand...

This made me smile.

Though I don't agree with it totally. As another poster said, we haven't really seen the best of Nibali vs. the best of Froome/Contador. I believe that Nibali '13 Giro and 14' TDF is a better rider than the '11 Giro/'12 TDF versions.

There is no way that Contador would have the yellow jersey right now if he hadn't crashed.

But he might have taken back 30-60 seconds since then, and we'd have a real race on our hands.

And that's the sad thing about it all.

whittashau said:
The fact is that none of us have ever seen Nibali at his best ride against Froome or Contador at their best. Yet the pretentious attitude of people who claim with certainty one way or another that such and such would happen is laughable. People need to take their eye patches off.

I will say that when it comes to Nibali that people have constantly under estimated him. People swore that the Vuelta was a fluke. Then he wins the Giro. Ryo claims that there are 35 climbers better than he is and that he would never win another GT. People before the Tour claimed that Valverde and Talasky would beat him. The same people who are writing off his chances against Froome and AC are the ones who wrote him off all along, so excuse me while I take your opinions with more than just a pinch of salt.
Click to expand...

All in all this was a very good stage. Not much action on the penultimate climb, but this was due to the heat I believe, that climb itself had a lot of steep sections. And the final climb was a beast.

Though typical for the Tour, quite a stretch of flat valley road in-between. Always makes a long range attack less of an attractive proposition.

Horrible day for Porte, and I'm a bit disappointed with that as I had high hopes for him. Though his crack wasn't the biggest of surprises.

Expect to see Purito in the breakaway tomorrow.

I am impressed with the way that Kwiatkowski limits his losses not too badly after cracking really early.

The older Schleck, nice ride. Who would have thought that his career would out last younger brothers?

Majka wasn't entertaining on the stage, but the posts on this thread about him were!

Valverde was entertaining for the entire climb; and for entirely varying reasons.

I think that TJVG is looking good for the third spot on the podium.

But there is no doubt that in the Tour of 2014, that Nibali is the boss.
D

Nibali crossing the line with more left in the tank: 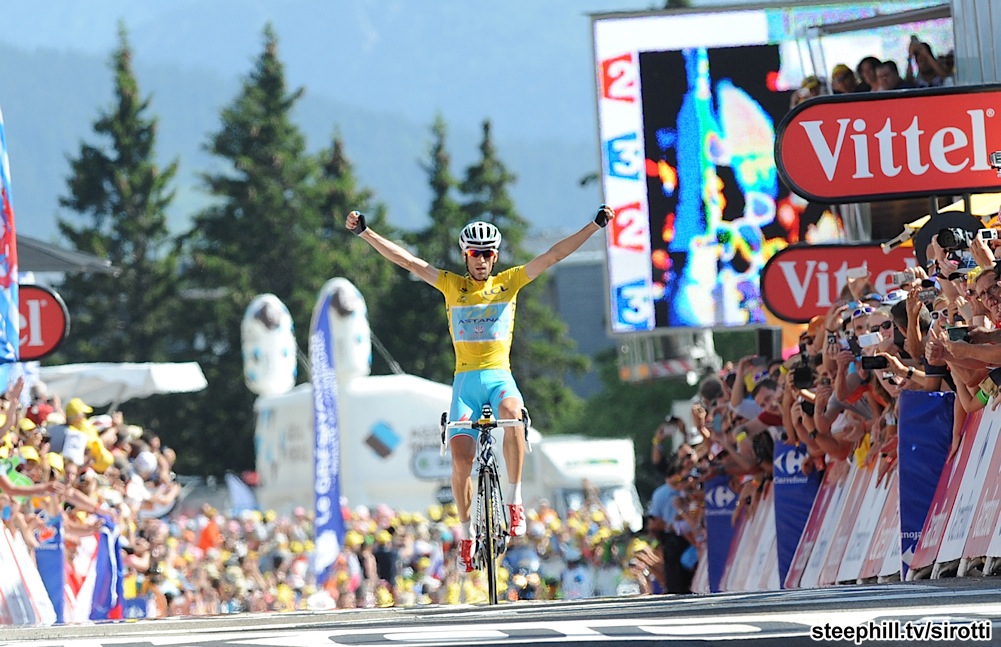