The first sprint opportunity. That alone is a guarantee for a very nervy day, and the possibility of echelons will serve to heighten the tension in the peloton. Most of the discussion has been about the Storebæltsbroen, or Great Belt Bridge, which is where the vast majority of the final 21 kilometres will be raced, however the fact that they are heading west means a headwind is the most likely scenario. On the other hand, the 40-odd kilometres after the intermediate sprint head south and entail a number of exposed sections, this might be the more suitable location to let the race explode.

Note that I wrote this text a week ago, currently the wind is forecasted to blow from the southwest which would practically rule out echelons.


Route description
The stage starts from Roskilde, best known for its Unesco-listed cathedral, which is the burial site of the Danish monarchs, the large number of Viking ships excavated from the adjacent fjord, a number of which are on display in the city’s Viking Ship Museum, and its music festival. From here, the riders head northeast for a rolling first half of the stage, but neither the hills nor the exposed terrain (which is still quite limited in this part) should cause any problems. In the second quarter of the stage, the west coast of Sjælland is reached and here the hills are a bit higher; ASO have squeezed in three cat. 4s: Côte d’Asnæs Indelukke…

After this, the hills become more scarce, but so do the trees. While this part of Denmark is too densely populated to have very long exposed sections, there are still a number of stretches of 2 or 3 kilometres in length that are both fully exposed and almost always heading south, a wind from the west or northwest can really do a number if it’s strong enough. The first of these comes at the halfway point of the stage, but it isn’t until after the intermediate sprint in Kalundborg that they are decently close together. 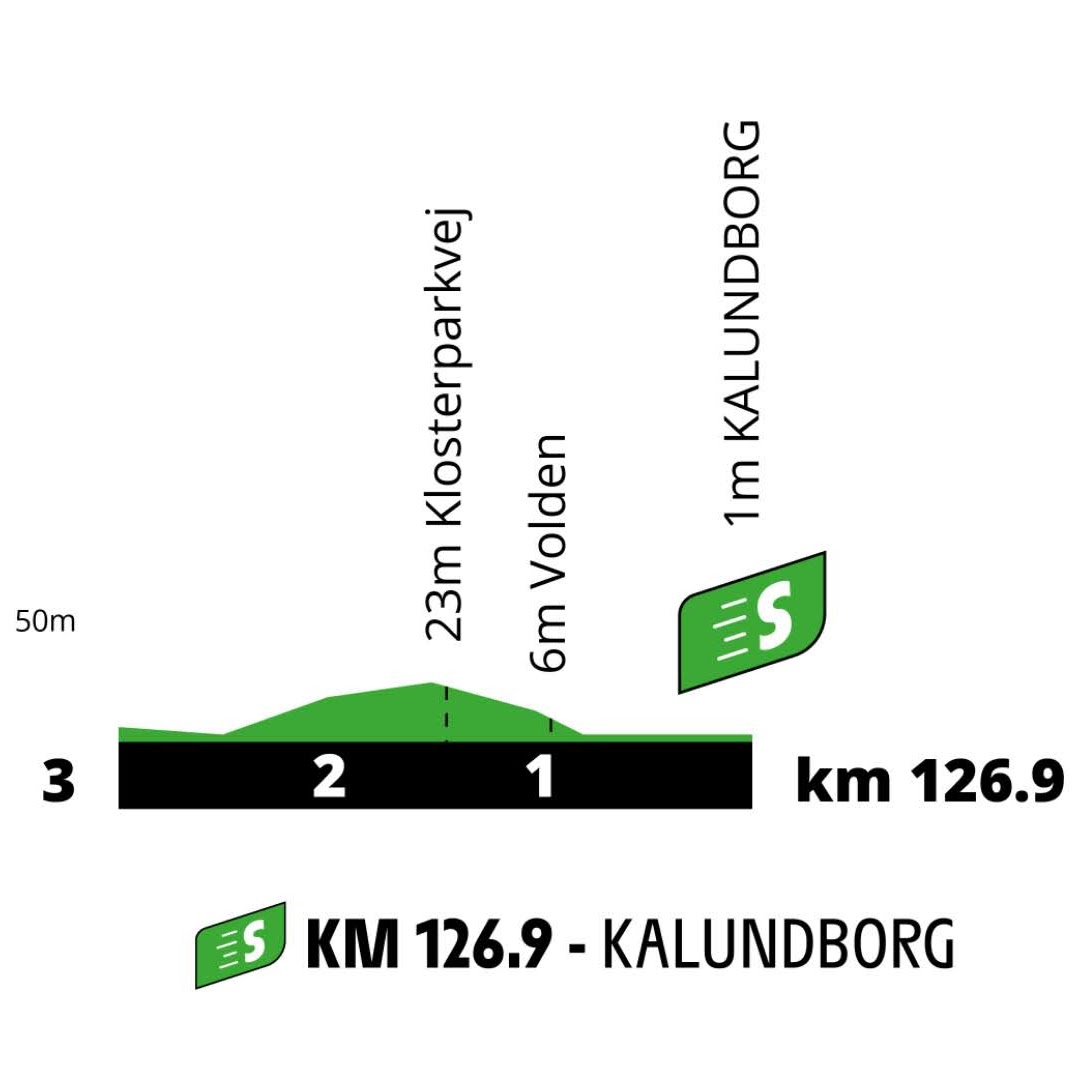 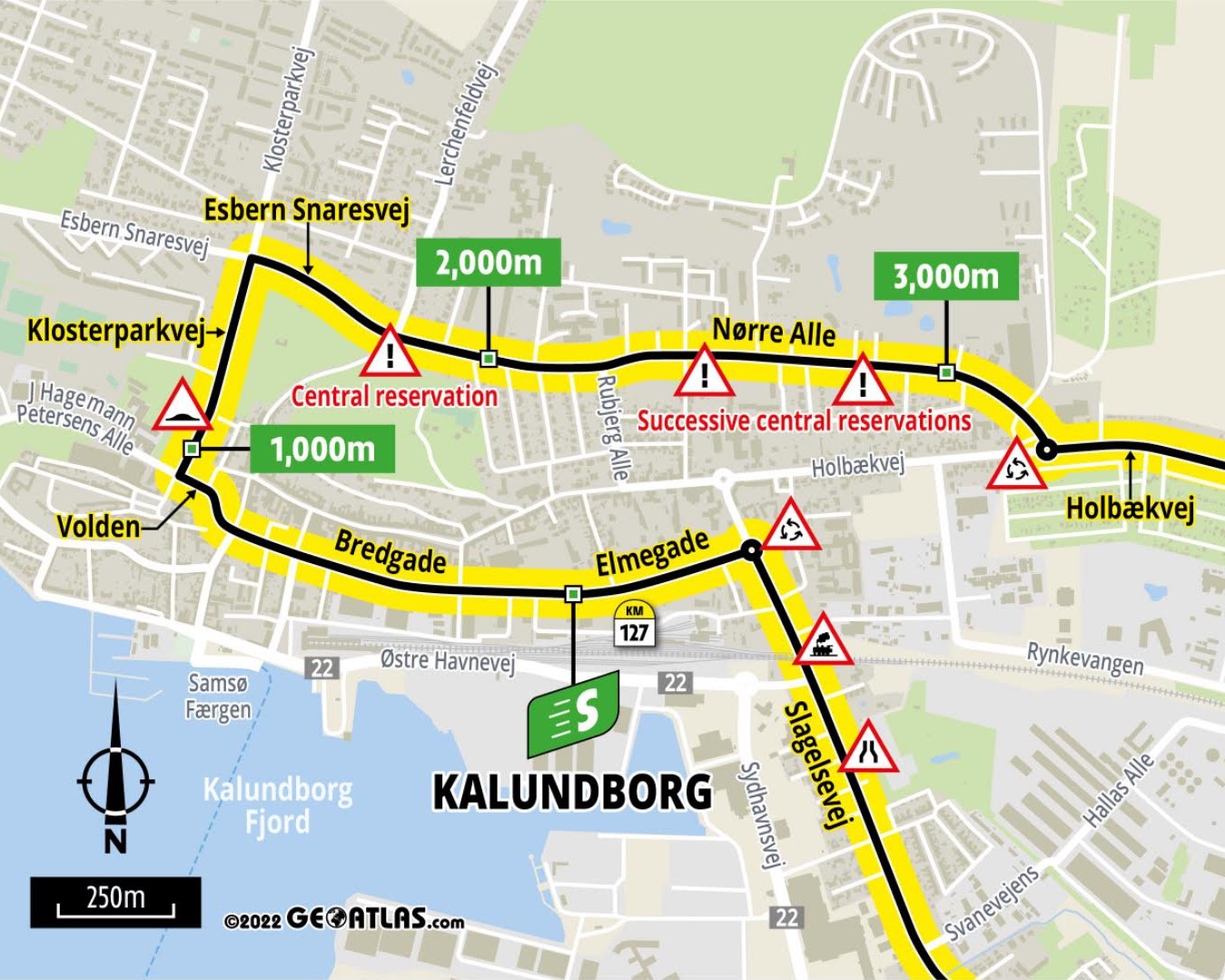 The most dangerous section is this one, between 68 and 60 kilometres to go. Over a distance of 7.2 kilometres, there are only short protected sections to interrupt the openness of the terrain, and a headwind on the Storebæltsbroen means a crosswind or cross-tailwind here (unless the wind blows from the southwest, in which case nothing will happen on this stage). 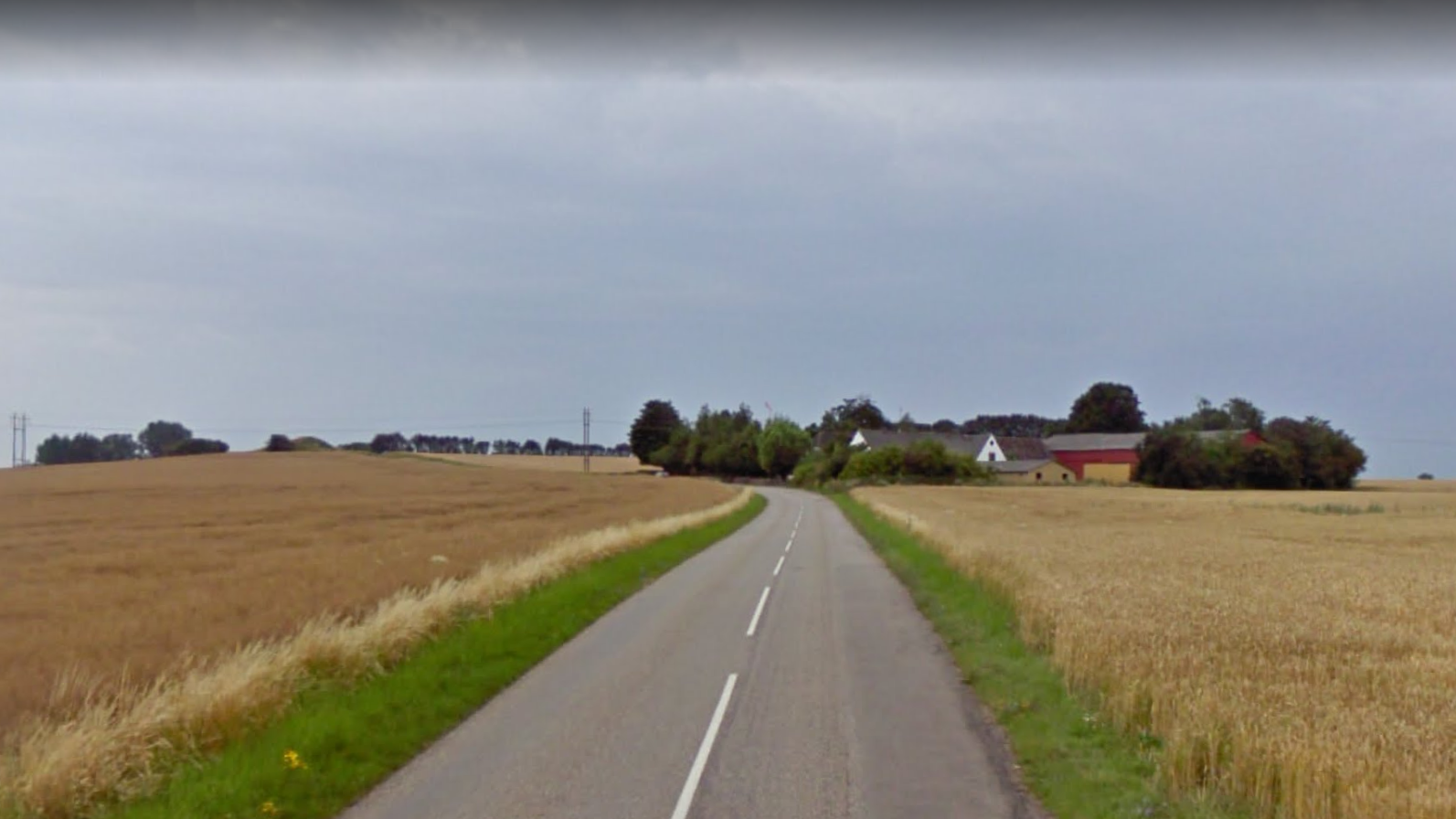 Sample of the terrain in this section – not perfect, but if the wind is strong enough…

At 31.4 kilometres from the line, the route turns west once more to approach the Storebæltsbroen. We head onto the motorway at 24.2 kilometres to go and shortly after that, it’s onto the bridge and into the wind. The road heads WSW, so unfortunately a headwind is the most likely scenario, but in any other case, not much wind is required to fracture things here… 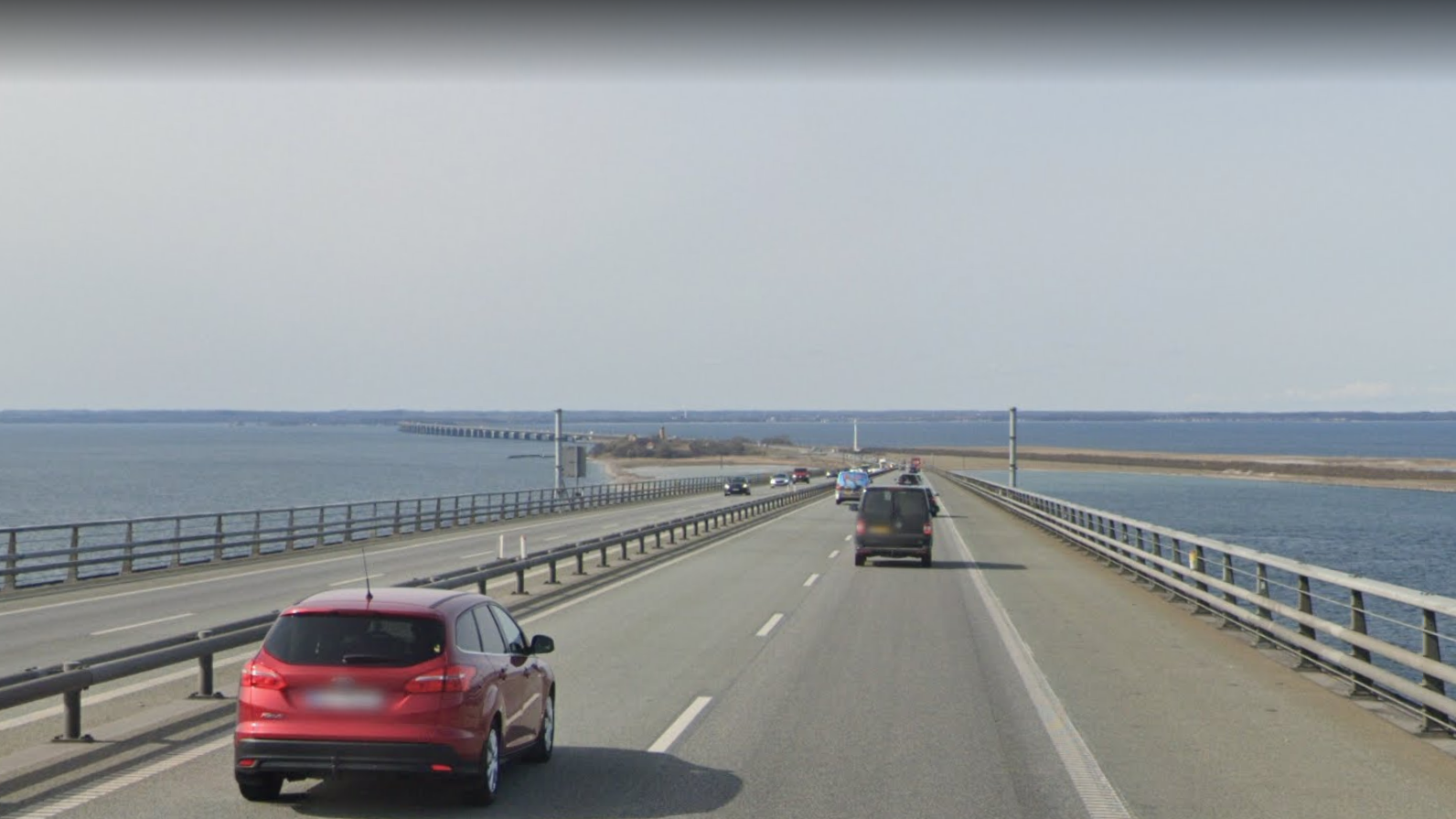 Downhill section of the bridge – if no headwind, speeds will be crazy 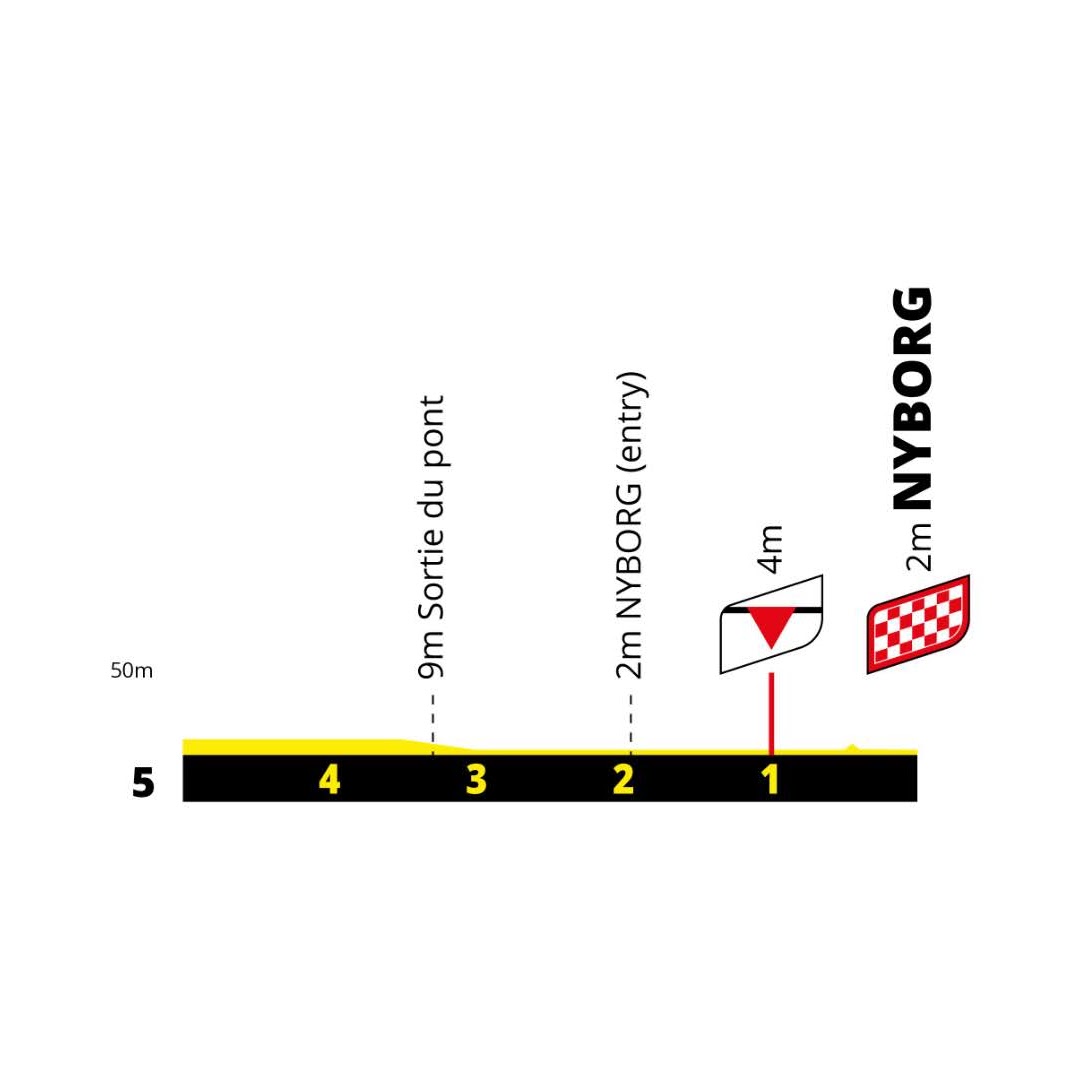 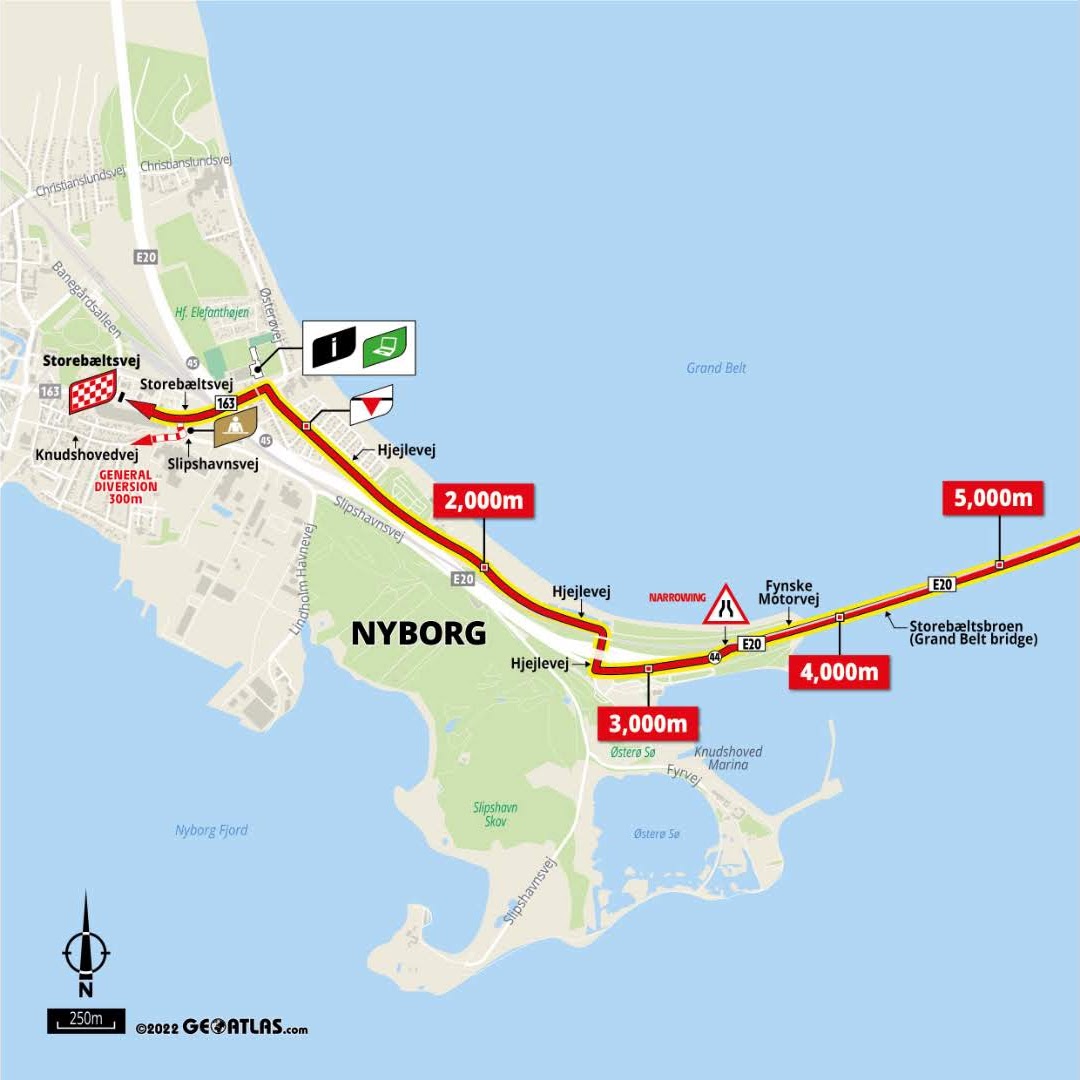 Ramrod straight until they leave the motorway at 3.3 kilometres to go right as they come off the bridge. The fight for positioning will be fierce here, as the slip road is naturally much narrower than the motorway. 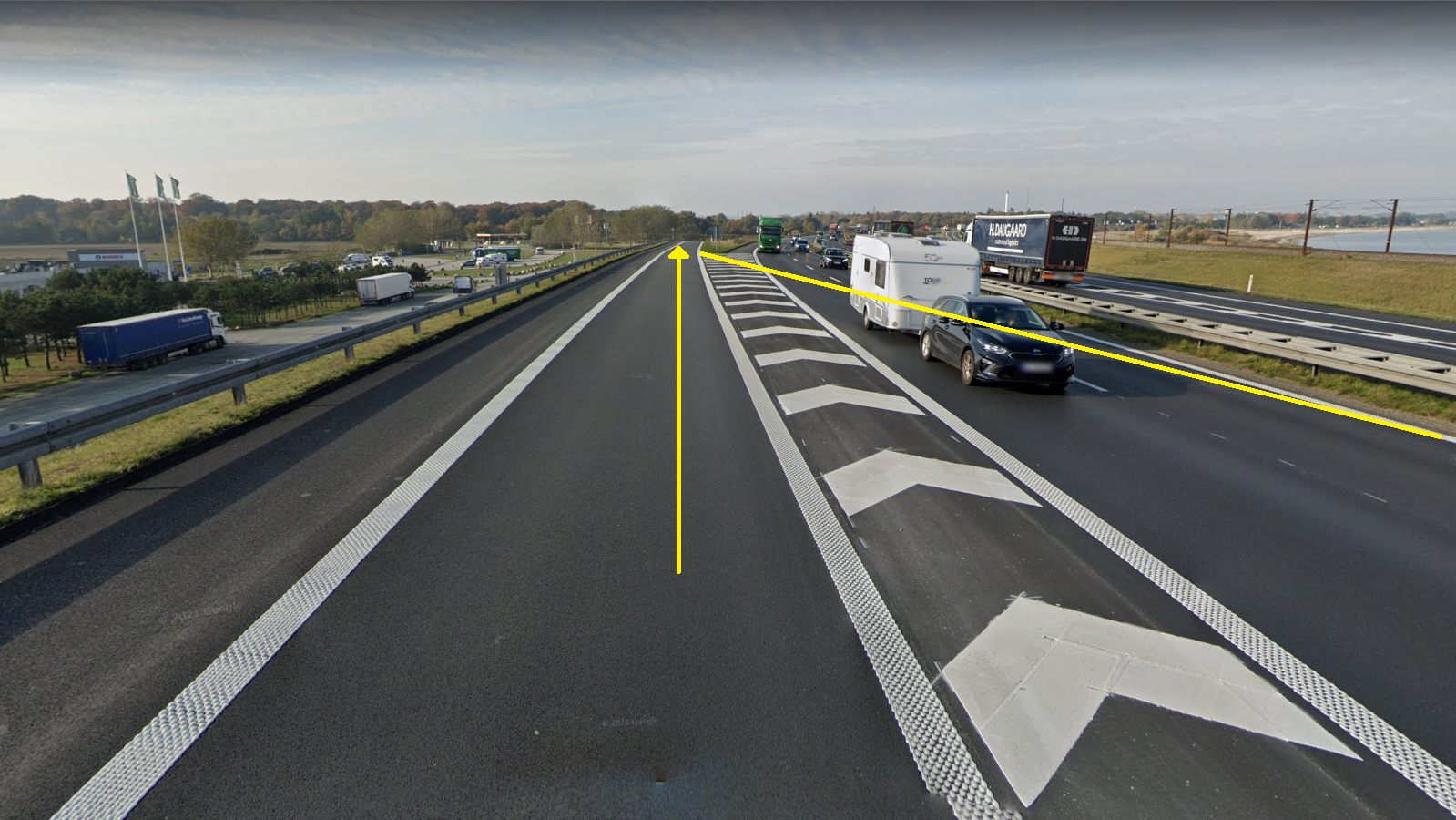 To exit the slip road, there is a 90-degree right-hander onto a road that passes under the motorway and the railroad before turning sharply to the left. 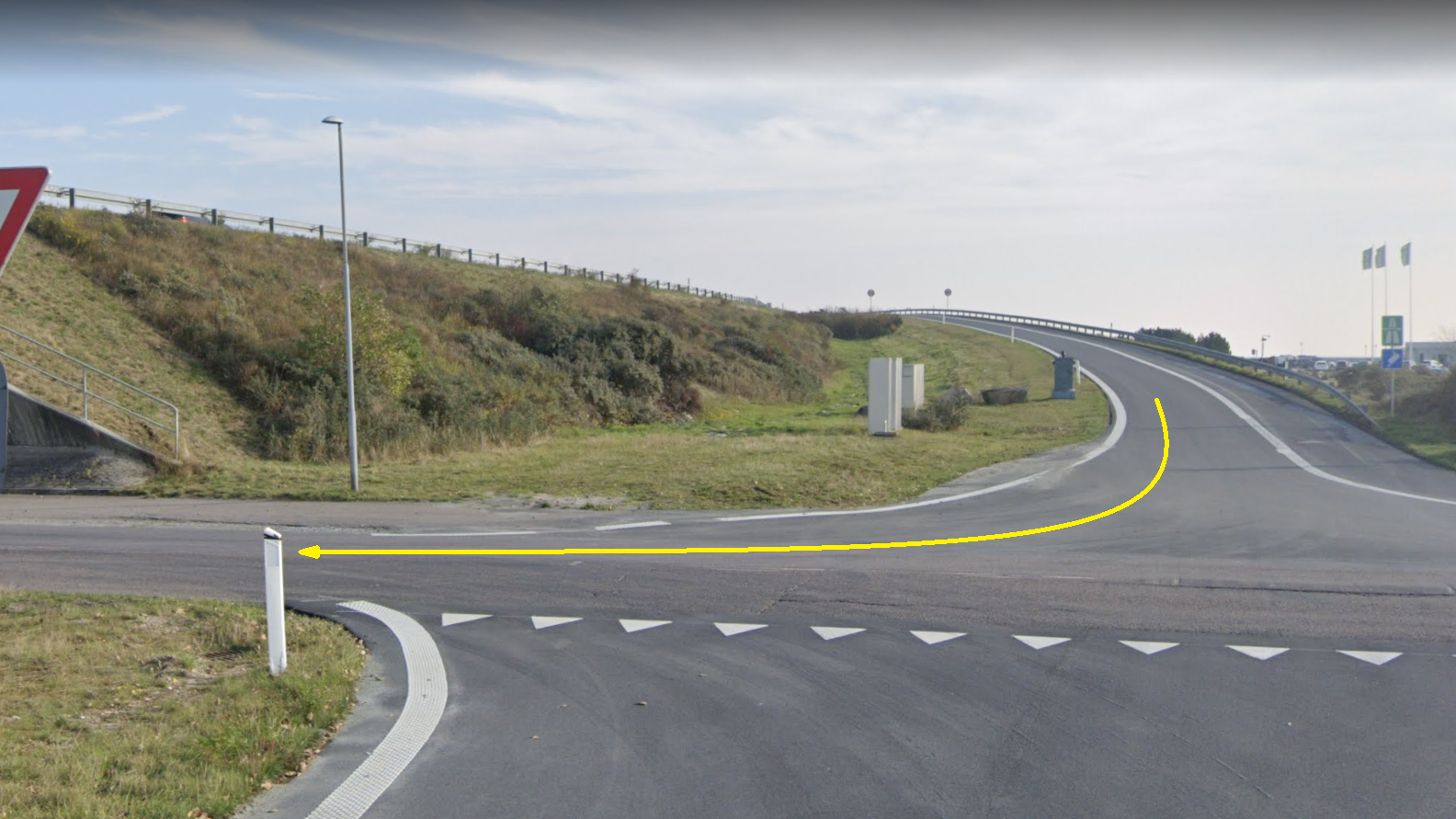 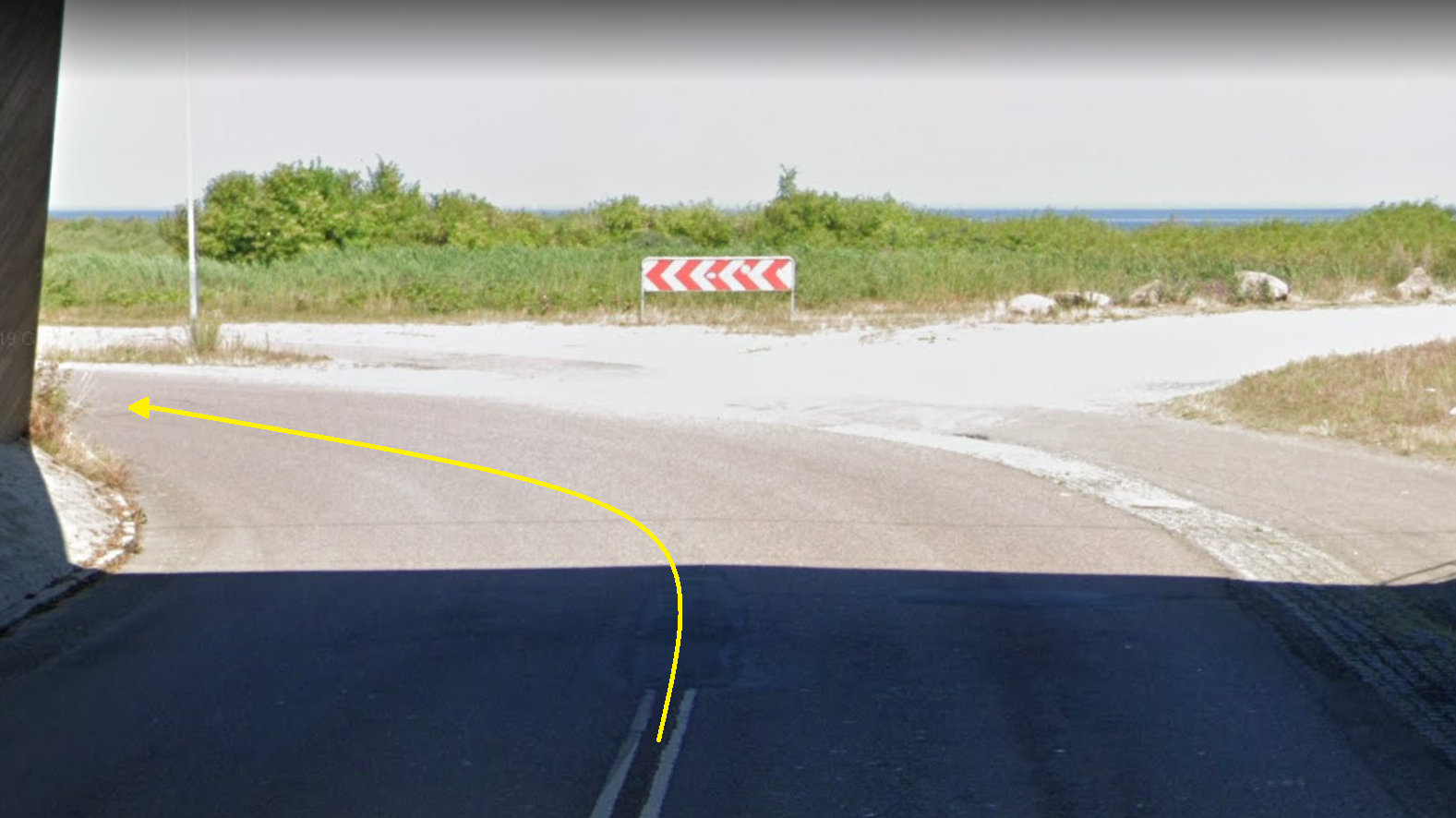 As you can see, this road isn’t exactly the widest and the riders only leave it at 0.8 kilometres from the line. 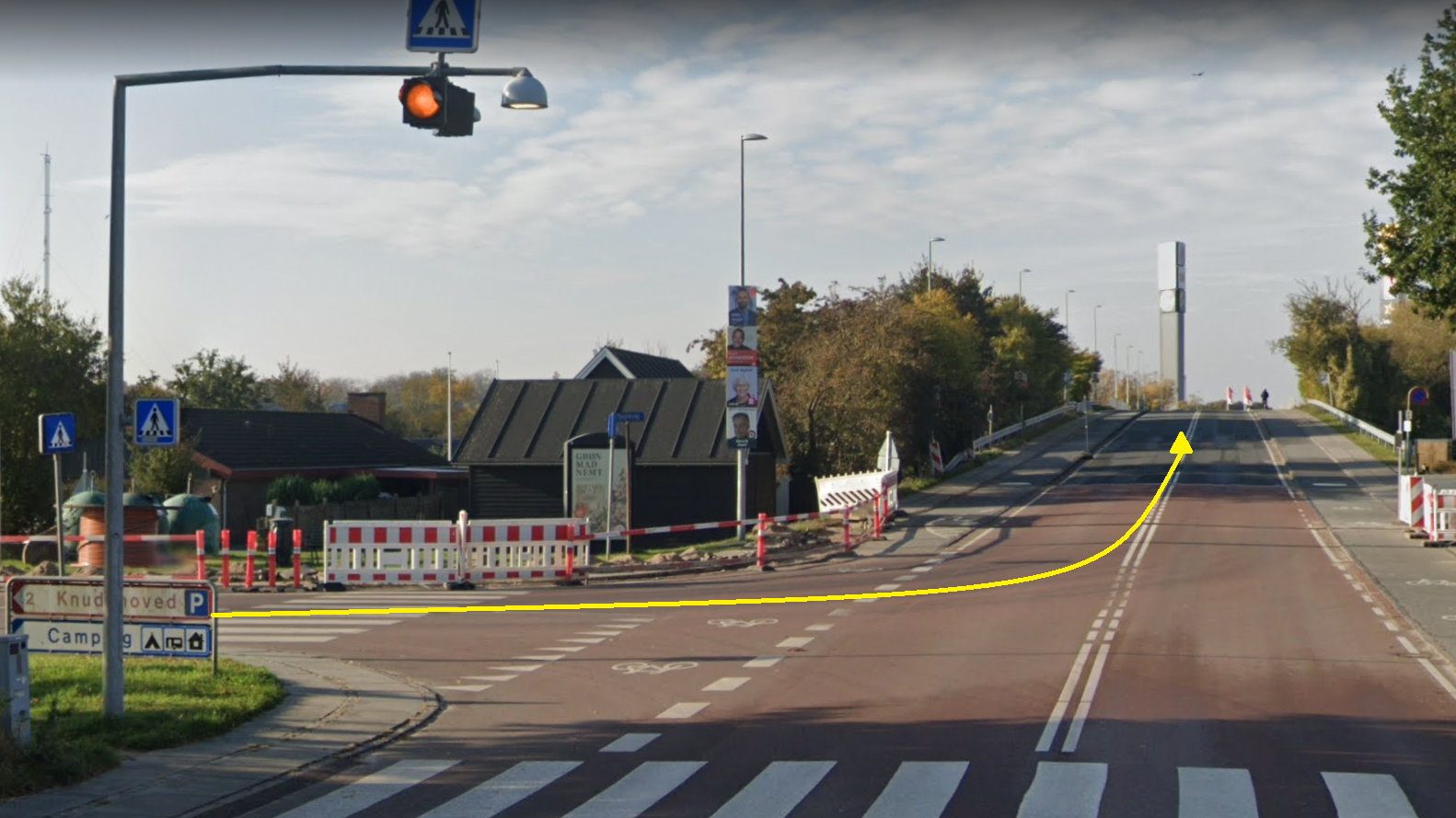 Nominally this is the final straight, but this final stretch is mostly on a long, gradual curve to the right, before turning slightly back to the left in the final 100 metres. Moreover, the road first rises slightly to cross the motorway, which means that it then gives way to a false flat downhill off the bridge at about 600 metres to go that lasts until about 300 metres to go. It ’s probably the least safe sprint finish of the Tour, coming on the first sprint stage of all places, and it hasn’t been chosen for scenic purposes either – the line is located in the middle of a half-abandoned business park. 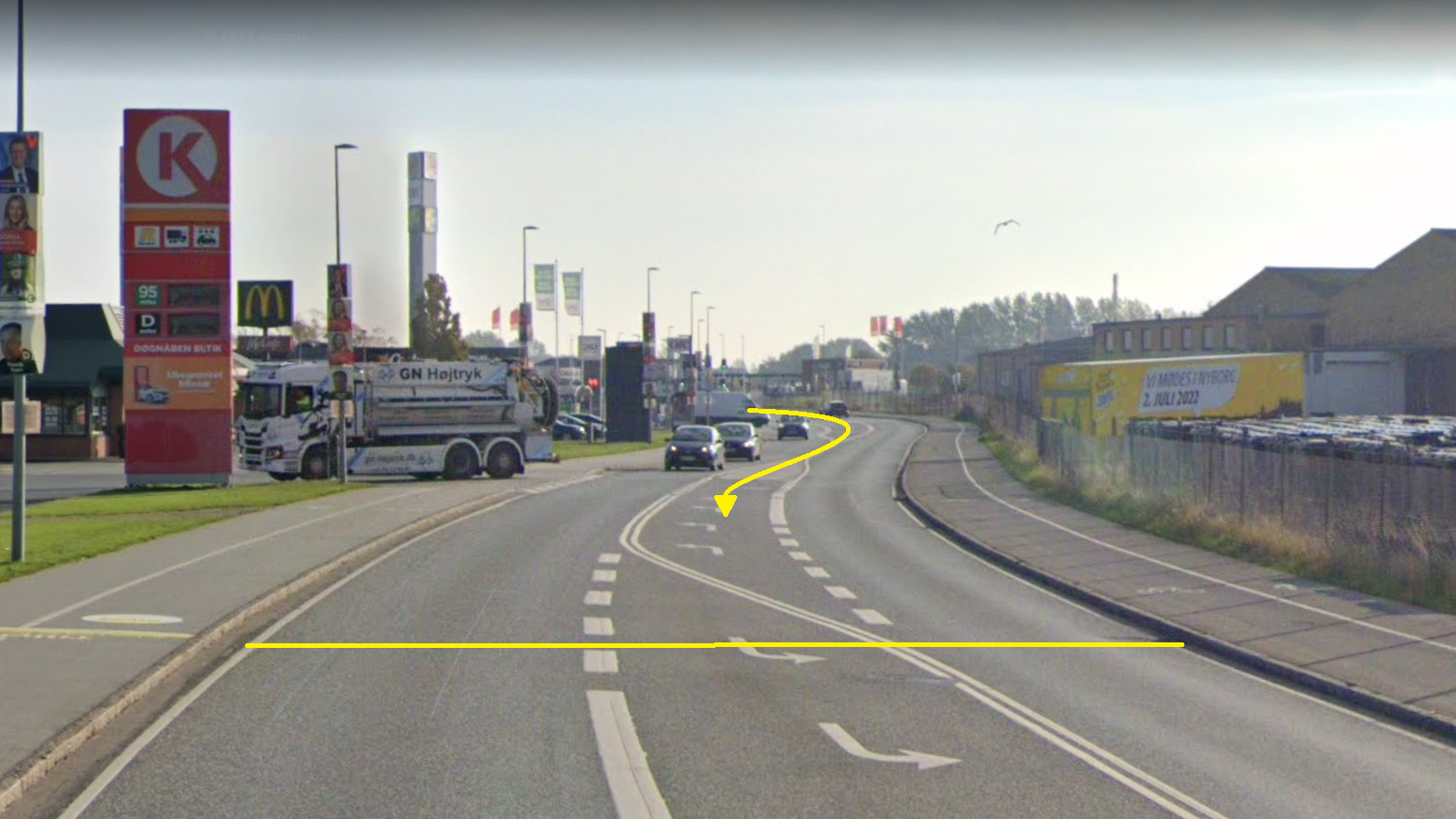 The town of Nyborg developed around its castle, which served as the seat of the Danish monarchy in the middle of the 16th century. It is the historical western stop for traffic crossing the Great Belt, originally by boat, and via the bridge since the 90s, and it is in exactly that role that the Tour is using it here. 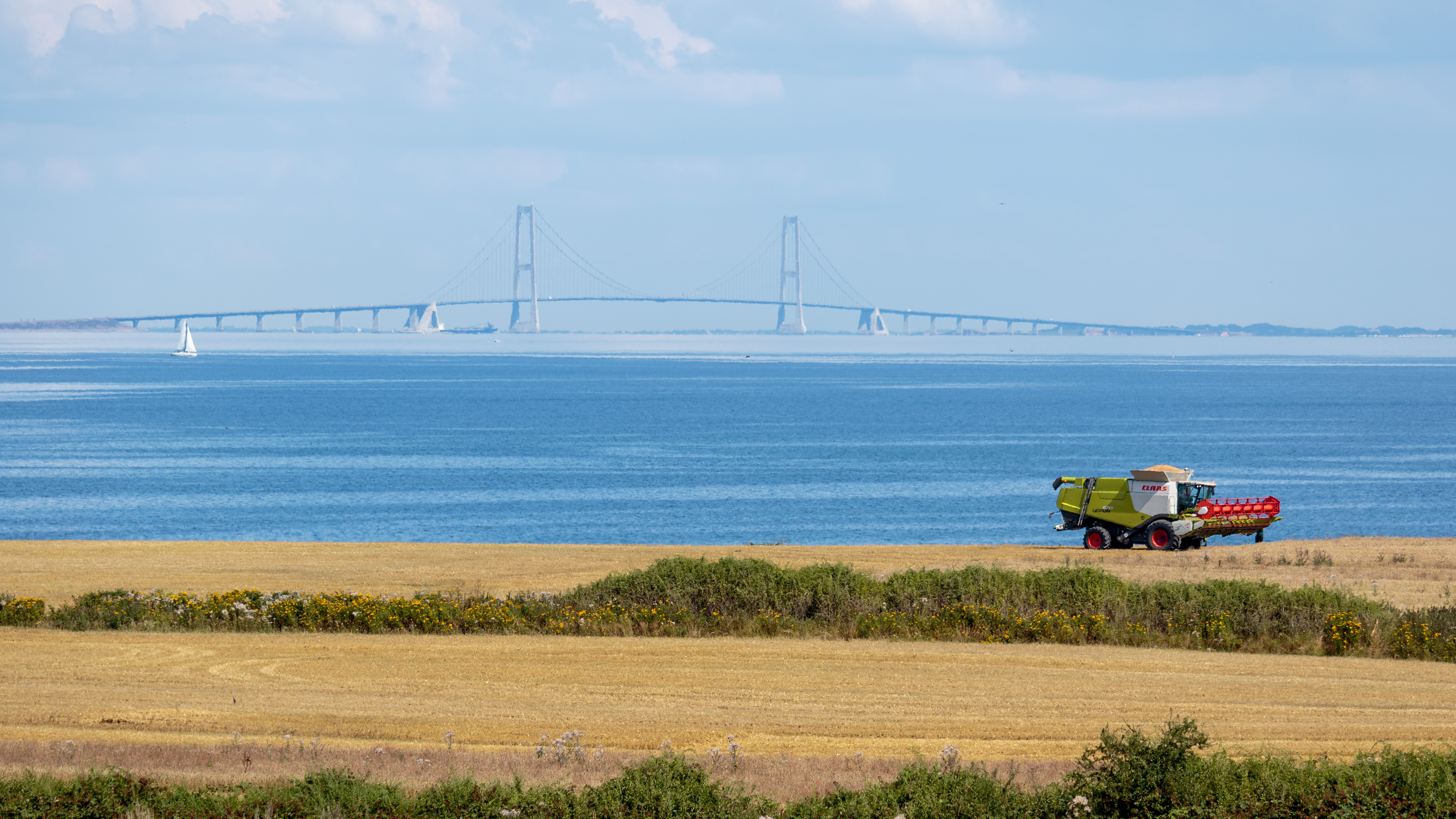 The Great Belt Bridge from the northeast.
Reactions: DenisMenchov, postmanhat, Volderke and 20 others
T

Echelons or this stage sends me to sleep.
Reactions: Sandisfan

The Tour will be over again.
Reactions: Sandisfan, DoYouEvenRideBruh, topcat and 2 others
S

This isn’t the bridge from “The Bridge” series, is it?

No, that one goes to Sweden.
Reactions: jsem94, Sandisfan and Sciatic
J

No that one separates copenhagen and malmo
Reactions: Sandisfan and Sciatic

I heard Prudhomme tried to get Boogie Down Productions to come and play in Nyborg.

The most exciting thing about this stage might be the writeup by Devil's Elbow? Great job.

A lot will depend upon the wind, hopefully no crashes. Hopefully a bunch finish and we get to see which sprinters are in the best form.
Reactions: claude cat and Sandisfan
M

Devil's Elbow said:
Note that I wrote this text a week ago, currently the wind is forecasted to blow from the southwest which would practically rule out echelons.
Click to expand...

Let's see what happens - I would clearly prefer echelons for some fun. Then they can do a classical sprint on stage 3.
Reactions: Sandisfan

With the current wind forecast it honestly seems more likely to have echelons before the bridge than on it. It would be a bit of a letdown if the next two days go past without any echelon action but that seems like a very plausible scenario right now.
Reactions: Sandisfan

Too high expectations on the bridge, can only lead to disappointment.

So probably borefest and Jakobsen to win.
Reactions: bambino, Sandisfan and KZD

Yeah, better not to have too high expectations.

johnymax said:
Yeah, better not to have too high expectations.

Lutsenko wins in a five man sprint with Thomas, Roglič, Fuglsang and Quintana.
Click to expand...

I have to LOL at my own post...lol
Reactions: Sandisfan and DoYouEvenRideBruh
C

Teams will be nervous and will want to stay at the front. Where a lot of energy is wasted for nothing. Hence in my opinion it won't take a big amount of wind. For Quintana to win this Tour edition.
Reactions: Sandisfan
L

As always great write-up, but Roskilde has far stronger memories of festival concerts by My Bloody Valentine, Mogwai, Shins etc than it’s cathedral
Reactions: shalgo, Cookster15, Sandisfan and 3 others
T

The way this bridge has been hyped everywhere the past month anything but Passage du Gois levels of annihilation will be a let down.

I still have Johnathan Vaughters going absolutely flying in my head, as far as I know he's still soaring through the air to this day.
Reactions: Unterlenkerfahrend, Cookster15 and Sandisfan

JV chasing Quintana and a spectator not happy about it.
Reactions: DenisMenchov, wheresmybrakes, danielovichdk2 and 2 others

danielovichdk2 said:
I heard Prudhomme tried to get Boogie Down Productions to come and play in Nyborg.

Not sure many will get this one but I certainly appreciate the reference!
Reactions: StryderHells

I know. Those two were not in any particular order
Reactions: laarsland
M

Hopefully not too much carnage, typical of these types of stages but echelons always catch out some GC riders.
Reactions: Sandisfan
P

My experience is whenever everyone sounds the alarms about echelons they don't happen because everyone is prepared and focused. Only crashes can make it happen.
Reactions: Sandisfan
S

Pistolas said:
My experience is whenever everyone sounds the alarms about echelons they don't happen because everyone is prepared and focused. Only crashes can make it happen.
Click to expand...

You mean the forum controls the wind? What power we have!
Reactions: Sandisfan
D

Thanks @Devil's Elbow for these amazing previews!
Reactions: BR2 and Sandisfan