No Thread for this race and i was going to tweet about it,

With Oman off we have seen stronger fields flock to France for example, this race again is no exception. The race had few punchy winners but last year two climbers in Pinot & Bardet battled it out. The top 10 had a a bit of a different look. 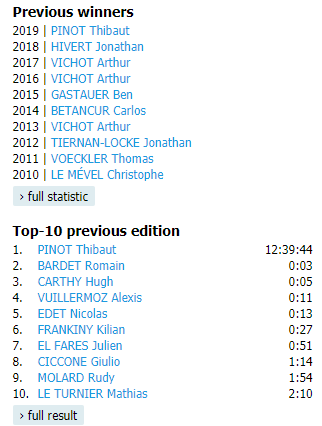 Their are a few more WT teams in this years edition, with 9 in all. Porte is added to this field, while Quintana continues his French adventure. Calmejane & Masnada don't get a mention in the team highlights but are worth watching on this parcour and feature in the top 10 competitors.

Rolling day, their is plenty climbing at the end some of it not noted. Last kicker is 3km at below 6%, we will know whos competing for GC after this one.

This one is less rolling but they go higher and with longer climbs, later in race they climb a 6.5km climb steeper than day before, nearly 20km of downhill before hitting the final climb which is longer and more testing than day before, expect this finish to be contested by a further reduced field. The climb looks pretty steady so team tactics will come into it.

You should get the picture now why Pinot & Bardet fought this one out last year with Carthy 3rd. The 3rd day is very much back ended, 2 intermediate sprints will likely interest a few looking to nail a sprinters jersey. Don't expect much action if any before the final climb, not a giant by any means but the steepest finish of the week at 8.4% over 5.7km, at 3km it does hit a flat spot, so this climb really is the most testing, expect the final 3km to be raced hard.

Great to see teams coming to these well organised southern France races, Quintana is going be very hard beat off his superb effort up half of Ventoux and a supportive team. If Pinot was indeed slightly off last week then this is the ideal chance for him to redeem, Bardet makes his European debut and its hard to tell how quickly he is going to get upto pace from his trip down under, he does have the super Cosnefroy here with him. Porte after a strong visit home will always be in the discussion here.

Masnada is interesting a world tour rider now with CCC in theory he should enjoy this type of racing. Watch for Chris Hamilton on debut after breaking his balls literally. While Ben O'Connor showed glimpses that he might return to something like he showed 2 years back before a big crash setb back. Molard supports FDJ here, but Sunweb's other option Oomen will surely get a chance of his own. Kangert gets the EF leadership and needs make the most of this one.

Watch out for Hungarian rider Valter, with the Giro in Budapest this year he is certainly riding to prove his place in a grand tour team, although given lack of GC ambition, CCC might be happy to carry him but he did have a solid L'avenir last year with Hungary keen to start putting a cycling stamp down. . British fans, Mark Donovan makes his Sunweb debut so keep an eye out for him.
Last edited: Feb 21, 2020
Reactions: Bronstein and DJ Sprtsch

Sorry my image links, seem to have cut out, will try again

TV update if anyone has details, but looks like maybe Eurosport France or highlights
Last edited: Feb 21, 2020
Y

Interested to see how Porte performs in this race - His form at the TDU was better than in 2018/2019.

I think that Quintana and Porte will give us a nice show.
R

Quintana will shred them on the last stage.
H

Is this race live anywhere ?? Anyone got a link
F

Perez wins stage 1, ahead of Turgis and Storer.
B

It's a little sad this race gets so little attention, no broadcasting, nothing... There are a lot of riders I would like to see and the route is not bad.
Reactions: RedheadDane

BlueRoads said:
It's a little sad this race gets so little attention, no broadcasting, nothing... There are a lot of riders I would like to see and the route is not bad.
Click to expand...

I agree! Though, that could be in part because of my want to see everything mentality. But, the start-list and the route certainly helps.
H

If anyone comes across any highlights please post here
I would like to see the battle between Porte, Quintana on Eze
Alosto see Pinot & Bardet

I'm not sure if Eze and Faron are long enough for Quintana show his dominance.

It looks more like the climbs Porte usually thrives on.
D

A bit late to the party, but this is a great little stage race. If Porte can stay on the bike he should be able to bring this home.
H

It looks more like the climbs Porte usually thrives on.
[/QUOTE]

Is it live somewhere?

Logic-is-your-friend said:
Is it live somewhere?
Click to expand...

He dropped Pinot with a single acceleration and put 30 seconds into him in about 3k time. Something is brewing here.
Reactions: Logic-is-your-friend

40 seconds ultimately. Nairo is taking no prisoners right now. Pinot sprinted off his wheel like a fly, Porte humiliated on his Col d'Eze.

But some of the names in that bunch, do put the results into perspective.

Edit: by which i primarily mean those of Pinot, Bardet etc
Last edited: Feb 22, 2020

Pinot ,Bardet and Porte are names not to be sniffed at esp Porte at this time of the year. Quintana is absolutely flying at present
The thing will he still be in June when the Tour starts

Still not a bad performance by Pinot. It's still February. He doesn't need to be in strongest form, yet. On the other hand, Nairo is looking fantastic, and I think this is very good for him to regain confidence and belief in what is (again) possible.
You must log in or register to reply here.
Share:
Facebook Twitter Reddit Tumblr WhatsApp Email Link