Unofficial I hate Versus thread

Page 8 - Get up to date with the latest news, scores & standings from the Cycling News Community.
Sidebar Sidebar
Previous Next

El Imbatido said:
I live in Australia so we also have Phil and Paul. But whats irritating though is like every few minutes you here Phils voice in the background (can't really make out what he is saying) but by my guesstimation it is him to voice overs for commercial intros and exits. Can someone confirm or deny it?


Sorry if it was already asked by i ain't re-reading this whole thread?
Click to expand...

He actually does a radio commentary at the same time which is why you can hear him in the background at times.
D

BroDeal said:
I have been muting versus and listening to Eurosport audio. Only problem is that the audio is about thirty seconds behind the Versus video.

From now on I will try to find a video feed to complement the Versus video. There are so many commercials and stupid features on Versus that their is precious little actual racing. They used to reserve most of these stupid features for the expanded coverage. Grrr.
Click to expand...

If you have a DVR you could pause the video feed for 30 secs and bring them back into sync. Where do you get the Eurosport audio feed from?
A

DavidT said:
If you have a DVR you could pause the video feed for 30 secs and bring them back into sync. Where do you get the Eurosport audio feed from?
Click to expand...

You just blew my mind.
D

At 3 miles to go when Cancellara dropped off Liggett and Sherwin were giddy in their sycophantic adulation of Armstrong saying he was the leader on the tour on the road and he would "certainly" be in yellow tonight, conveniently ignoring the 9 riders 6 minutes up the road.
D

OK, I just saw something worse than Versus here in the USA; ESPN's Sportscenter 2 minute summarization of today's 7th stage. It was quite painful. They mixed up Contador and Cancellara, and mispronounced their names. But they got the Lance interview for all the baseball loving fanboys.
R

DavidT said:
OK, I just saw something worse than Versus here in the USA; ESPN's Sportscenter 2 minute summarization of today's 7th stage. It was quite painful. They mixed up Contador and Cancellara, and mispronounced their names. But they got the Lance interview for all the baseball loving fanboys.
Click to expand...

No reason to ruin cycling with ESPN. Ignore.
R

Compared to CTV, Vs is indeed poor: Too many commercials, too many features, too many bike manufacturer infomercials, too much announcer nonsense, and too short segments. But they have to pay for the rights to broadcast the race; they are trying to attract the non-cycling audience; they are making an appeal to the women; and they have alternative broadcasts for the more cycling oriented. Also, I think Bob Roll is pretty cool, and I respect Phil and Paul's vast knowledge, but they're just boring. I'd rather pay CTV to watch the race with no commercials and better announcers, but we have what we have: At least we get to see the Tour, live, at home, without dealing with the drunken Spaniards (I am one, so I can say that!)

OK, so I am also listening to VS today (normally I have the net feed of Eurosport on for the audio). I think P&P must be under contract to talk about LA every few minutes. It's not anything against LA, but holy crap, they keep on talking about the same stuff. And they just sounded off that they feel there is too much dope testing on LA. I think Phil said it was "ridiculous ... really" (and they alluded to the same for all the riders). WTF?
T

Of course the Versus coverage is amateurish and repetitive and heavy on the armstrong. It's geared to hold the attention of non cycling fans in the US. They're in this to make money, pure and simple.

I once saw some British commentary on a US football game played there. Equally amateurish.
D

Vs is typical american sports coverage

All the stats, repeated ad nauseum.

What truly ****es me off is the graphics covering the riders. I want to see the race not your BS.

Whoah, Sherwen is a player. 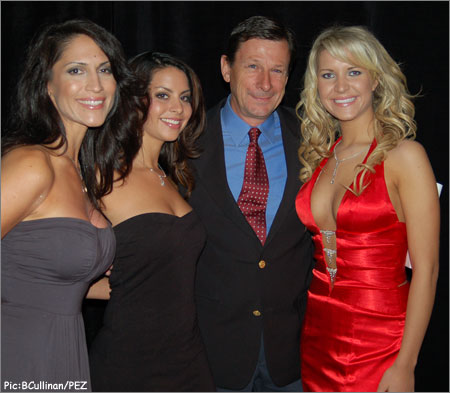 Yes, the Versus coverage is boring and the marching orders the commentators got to always refer to #2 Contador and #3 Armstrong as "Armstrong and Contador", and to shine the bright light only on Armstrong is just tedius. I watch the last ten minutes of the live coverage, and unlike in years past, do not bother with reruns later in the evening. Summer re-run television is a lot more interesting. The blame for this is does not go to the commentators; it is the producers who have created the script for this coverage, and they have botched it completely. Given a different script, the commentators might actually be allowed to cover the race rather than blather on incessantly about Armstrong.

"Someone told me tonight that viewership for Versus' Tour coverage is up 80+%. Great news, been an exciting TdF. Tune in folks!"

Ha, ha, ha. Is he serious? It's no doubt very exciting for him ready to stick it to Alberto in the ITT if he can and take a lead into Ventoux, if he can.
F

While enjoying a vodka tonic(@4) at happy hour at my nearby pub.The tour came up and people actually knew about it.Men and women.There reason was Lance.Our papers have the GC and previous days results,and most days a paragraph or two about the race.People(non cyclist) like VS there is just enough of that"here what drafting looks like" stuff and enough of regular BS about all things cycling.I don't like Lance but I am sure the networks are taking notice.Keep in mind that 80% more of the ten thousand of us who are watching is still a small number by TV rating standards.Maybe Simon Cowell can fix the tour coverage.If Lance is in the hunt after three weeks don't be surprised to see a major network put a recap show on.
L

Having Jonathan in the commentary booth helps a lot!

linenoiz said:
Having Jonathan in the commentary booth helps a lot!
Click to expand...

Agreed; it played out more like the Universal Sports coverage of the Giro. They actually talked about Tyler.

thank you for this thread. how many times do they need to play the tour intro?

Hummer is a tool

Who is worse Frankie Andreau or Robbie Ventura? (should be its own thread)

how often does a station need to run commercials about itself?

and Phil and Paul are tired. Phil cant get the names right most of the time and I feel like I am finishing his sentences for him...

how many different male enhancement products shill on this stupid network anyway?
I especially hate the one with the guy that says
"after i heard the commercials a hundred times i thought i would give it a try"
yeah try & justify bombarding us under the guise that eventually we will buy something if you become a big enough pest. great marketing

It does not get any funnier than this: Hummer is calling Armstrong Contador's mentor.

And some wisdom from Bob Roll: The Schlecks' body types are not good for time trialing because they are lanky and have a hard time folding themselves into a time trialing position. Someone should tell Contador this.

I was so excited to come home from work tonight and watch the ITT (which I recorded on DVR from the morning's broadcast). But about 14 minutes after Armstrong left the start house I couldn't take it anymore and just turned it off. Please, please stop with the Armstrong. Please. He's the THIRD strongest rider on his team (would be the fourth if Leipheimer hadn't broken his wrist) but he gets as much screen time as any two riders combined.

I know this has been iterated countless times already in this and other threads, but...dammit. I just needed to vent.

Yup it sucks.
Universal was better for the Giro.
K

"The fast cadence prevents the lactic acid from seeping into the muscles."

(On Wiggins): "Perhaps believing the hype a little too much and going out way too fast."

Boeing said:
thank you for this thread. how many times do they need to play the tour intro?

Phil cant get the names right most of the time and I feel like I am finishing his sentences for him...

Boeing-
That is the funniest s**t, I catch my self doing the same, it's pathetic.
Universal sports coverage of the Giro was so much better. Versus is extremely bias, I'm wondering how much the LAF pays Phil, Paul and Vs. for the overwhelming mentions of Lance. Contador wins the TT and soon after he crosses the line Phil and Paul go into a half hour explanation on how much effort Lance put into his run, WTF!
Click to expand...