Page 7 - Get up to date with the latest news, scores & standings from the Cycling News Community.
Sidebar Sidebar
Previous Next
S

after stage1 and today waiting for the Majka sprint tomorrow..
Reactions: Sandisfan

broppo said:
but he was only good in the last week of the tdf, I think he might have enough juice left to at least fight for the red.
Click to expand...

Maybe so! One thing is for sure, he's off to a great start with today's fantastic victory.

Libertine Seguros said:
Nairo gets so much negative press for his poor racing that people write the many occasions where he actually did light the race up and make attacks out of history. Am I surprised he pulled this off? Yes. I thought he, Roglič, Roche and Urán would ride all the way to the sprint to maximise time gain, and Quintana would inevitably lose out from that, but you can't fault his tactics here. He's got into an attack move by being among the strongest on a climb, then in a move that's gone at the end of a downhill, and then attacked that group on the flat to win the stage. When he's in form, he absolutely can ride like a champion, but because he is really negative when he isn't feeling good, people just act like he's never done anything aggressive in his racing career, which is just preposterous when you consider how he got those two GT wins, those Tour podiums and that polka dot jersey. Yes, he often rides conservatively and then picks one or two stages in advance to go for broke from far out on, meaning he rides quietly for the vast majority of the race - but there are other riders who use a similar strategy who get praised for what they bring to races. Quintana may have failed to take advantage of his climbing strength and cost himself significantly on a number of occasions, but he really doesn't deserve to be cast onto the same pyre as Levi Leipheimer, Simon Gerrans or Louis Meintjes.
Click to expand...

Quintana to me is an old style racer who cant deal with modern train tactics but anytime he is out on his own with other isolated GC guys he is full of life and just like on the road to Annecy all those years ago we see The Condor fly
Reactions: Sandisfan

Salvarani said:
So business as usual. You burn the helper first... which can be a tactic that can discussed if it wise to do or not.
Click to expand...

Exactly. A tactic which is stupid but nonetheless the norm.
T

LOL, without Roglic no win for the wheelsucker today
Reactions: Sandisfan

There goes my feared Ineos pick to win the Vuelta (Tao).
Reactions: Sandisfan
I

The podium celebration has gone cheap with beer instead of cava wine
Reactions: Sandisfan
M

Well taken victory by Quintana. Roglic seemed to be struggling a bit on the chase but did do a lot of the work. Amazing how Nieve stayed upright. Good to see Roche get the leader's jersey.
Reactions: Sandisfan
N

They've finished with Jakobsen and Richeze. If they were seriously Ineos' GC hopes that's beyond awful. I'm wondering if there have been any reports of illness in the team?
Reactions: Sandisfan

One of the best stages I have seen in a GT in a while.

Northerner said:
They've finished with Jakobsen and Richeze. If they were seriously Ineos' GC hopes that's beyond awful. I'm wondering if there have been any reports of illness in the team?
Click to expand...

Poels asked to be included in the Vuelta team a week ago, so I doubt there was too much hope
Reactions: Sandisfan
H

Laplaz said:
Roche vs. Rogla vs. Uran
Click to expand...

Bet you didnt think this morning you'd be saying that


search said:
Poels asked to be included in the Vuelta team a week ago, so I doubt there was too much hope
Click to expand...

So why send Kenny home ??
S

JosephK said:
Maybe so! One thing is for sure, he's off to a great start with today's fantastic victory.
Click to expand...

Dekker_Tifosi said:
One of the best stages I have seen in a GT in a while.

And so he strikes again
H

I am going to give a little love here to 35 year old Nico Roche who rode that stage so well . He said Quintana attacked at the perfect spot and would have gone after him but wary of others (I think he meant Uran) and then it was too late
Reactions: Sandisfan

- So Astana was exposed. I know Fuglsang is preparing for the worlds but he can at least try to help his teammates. And I thought from the rest of the team that someone would make the front group with Lopez.

- Lopez again with his tactical ineptitude. When he realized that nobody was pulling is was too late. LOL. He should have been told that every important rider in the group had a teammate in front.

- Easier to read the races and do tactical moves for Movistar when there are 2 leaders and not three. Valverde has worked with Quintana many times in the past. Easier with two as I said.
Last edited: Aug 25, 2019
Reactions: Sandisfan and Pantani_lives

At least, we will always have that jersey! 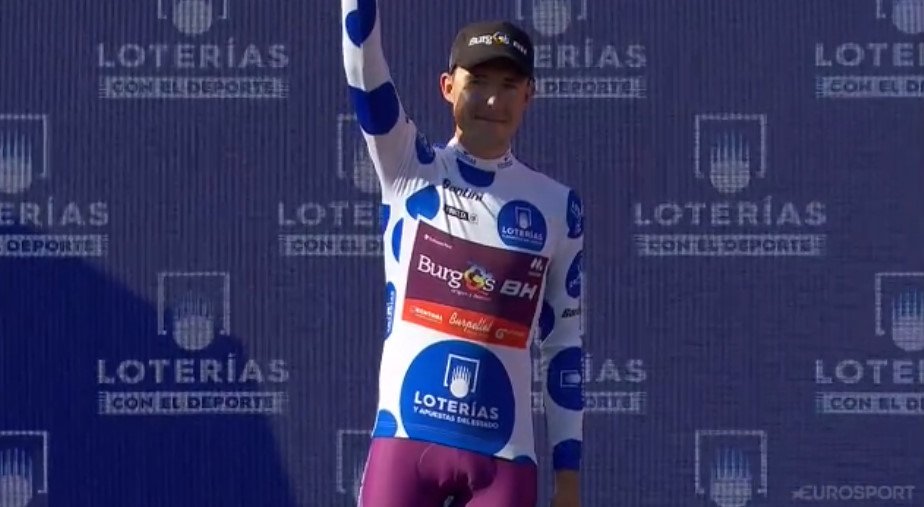 Black Betsy said:
At least, we will always have that jersey!

I was afraid Valverde would get that after sprinting for points for some reason on the Cumbre del Sol climb.

Let's just say that that would have been a downgrade.
Reactions: Black Betsy

I wonder if the team were telling Quintana to not push too much with Valverde chasing? And same with Nieve, he has Chaves chasing.
Anyway the biggest surprise was Fabio Aru, is the the old Aru we are now seeing?
Reactions: Sandisfan
B

Attacking Quintana is the best Quintana.

Actually any attack is a good thing. I wish more riders would realize this.
Reactions: Sandisfan
N

Hmm... In addition to the performance of Poels and Geoghegan Hart, Ineos also had Kiryienka finish over 5 minutes behind the last group on the road
Reactions: Sandisfan

Lequack said:
I wonder if the team were telling Quintana to not push too much with Valverde chasing? And same with Nieve, he has Chaves chasing.
Anyway the biggest surprise was Fabio Aru, is the the old Aru we are now seeing?
Click to expand...

As Quintana is known for not working in groups I doubt the team said anything to him anyway. Plus he's had a habit in the past of not following directions if he's supposed to be helping a teammate until the team has yelled at him in over the radio.
You must log in or register to reply here.
Share:
Facebook Twitter Reddit Tumblr WhatsApp Email Link