Another mountain top finish today, not as long as stage 5 but much steeper.
Last climb is 4km @ abour 12% average. 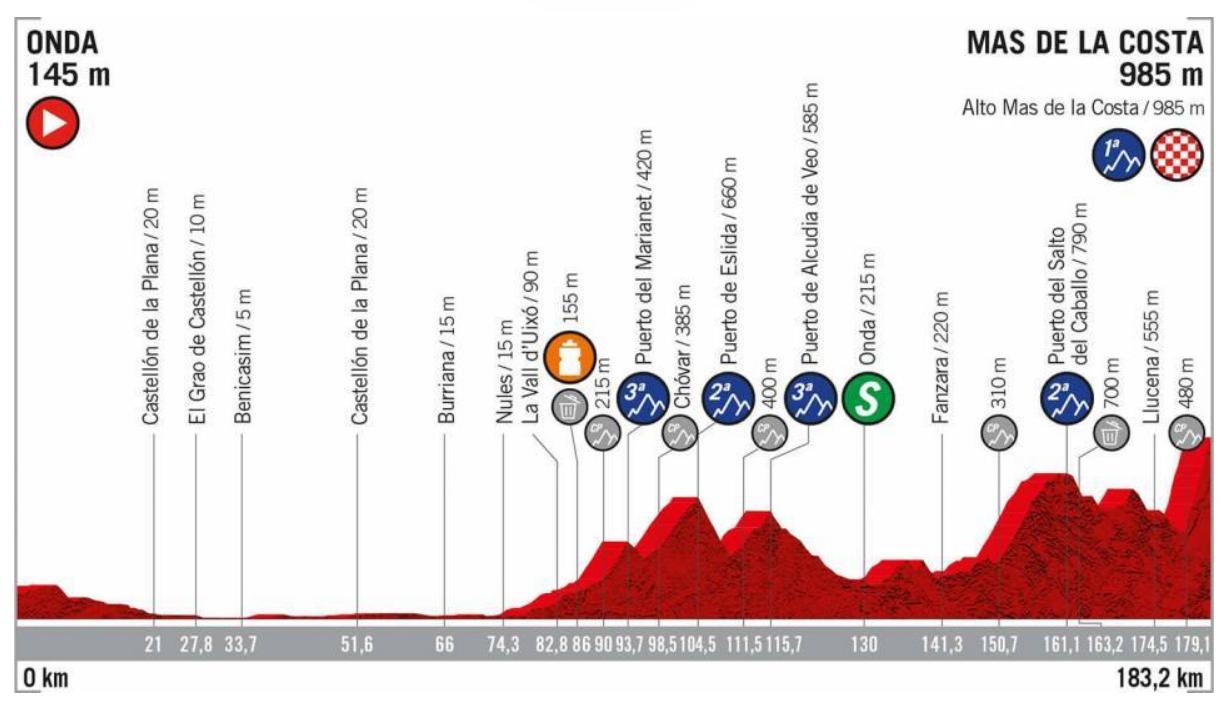 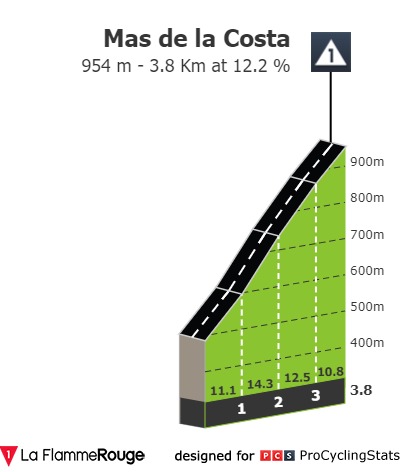 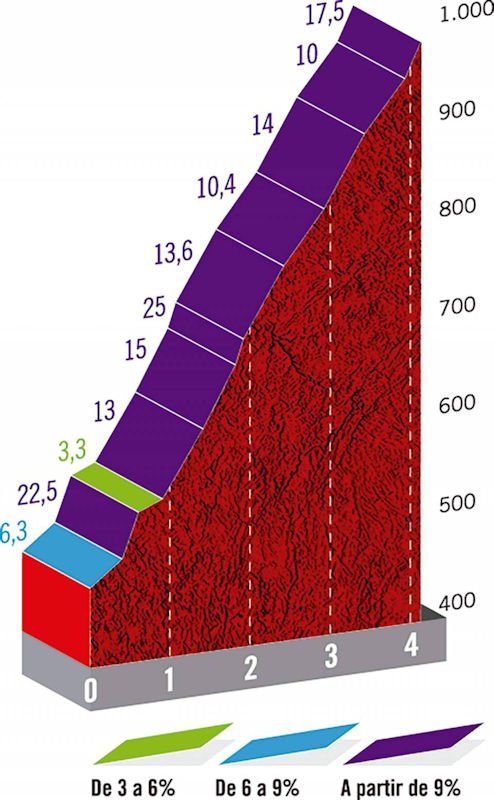 Onda is famous for its Muslim past. The city enjoyed its moment of greatest splendour when this culture prevailed, and the place still preserves a large part of its heritage from those days in its streets and people. Moreover, Onda has its own cycling history, linked to the Cabedo brothers, who were born in this little town in the province of Castellon. The elder brother, Víctor, sadly passed away in 2012 while training, and the younger, Óscar, took part in La Vuelta 18 as part of the Burgos BH team.

Mas de la Costa is not called this way because it’s near the sea, as it is over 30 kilometers inland, but instead because of its extremely steep slopes. This daunting finale first featured in La Vuelta 16, as one of the highlights of the race’s final week. The winner of the stage that year was Mathias Frank, from Switzerland, who was part of the former IAM Cycling team, recording what was to be the Swiss team’s last victory prior to its disbanding.

In the 2016 edition Froome, Contator, Quintana and Chaves all finished together on top of this MTF as the top 4 GC contenders. Valverde finished one minute back. Full results from that stage:

View full results of Stage 17 in Vuelta a España 2016 from Castellón to Llucena. Camins del Penygolosa over 177.5 kilometre. Won by Mathias Frank before Leopold König (2nd) and Robert Gesink (3rd). 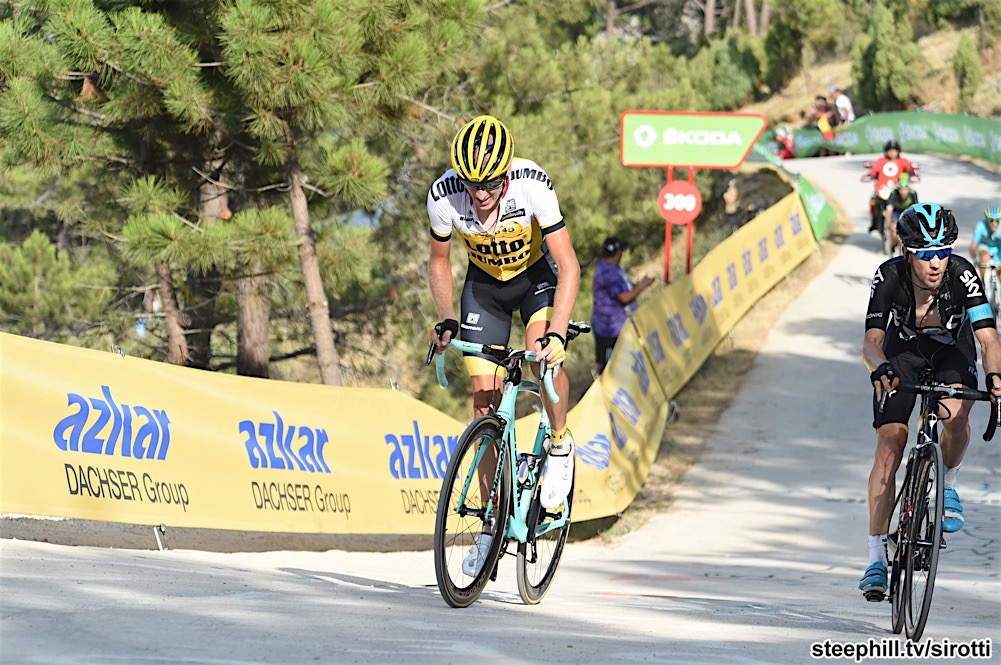 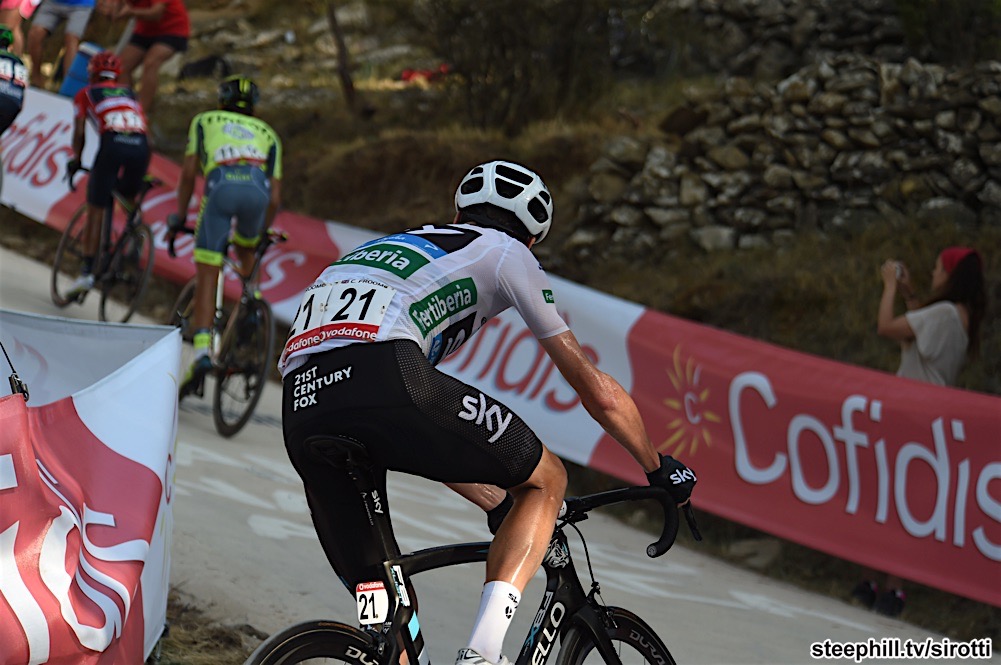 Also it was used in the Volta a la Comunitat Valenciana the following year, with Quintana winning.
Reactions: Pantani_lives
Z

One of the great stupid murs.
Reactions: Rollthedice, Red Rick, Flamin and 1 other person
N

Roglic can put the hammer down here. This is the type of climb that valverde isn't stellar.

I thought Valverde WAS the mur guy.
S

that does look rough. There will be gaps for sure...although likely not huge.

Murias or Caja ftw
it has to be a why not get someone in the break the last 2 days...

Lequack said:
I thought Valverde WAS the mur guy.
Click to expand...

But I wouldnt be surprised if he won today either. Seems to be in great form.
Reactions: LaFlorecita

This is just exactly the kind of ridiculous stuff I watch the vuelta for.

Noddy97 said:
Roglic can put the hammer down here. This is the type of climb that valverde isn't stellar.
Click to expand...

If he's in top form, and I believe that he is, Valverde is the man to beat there 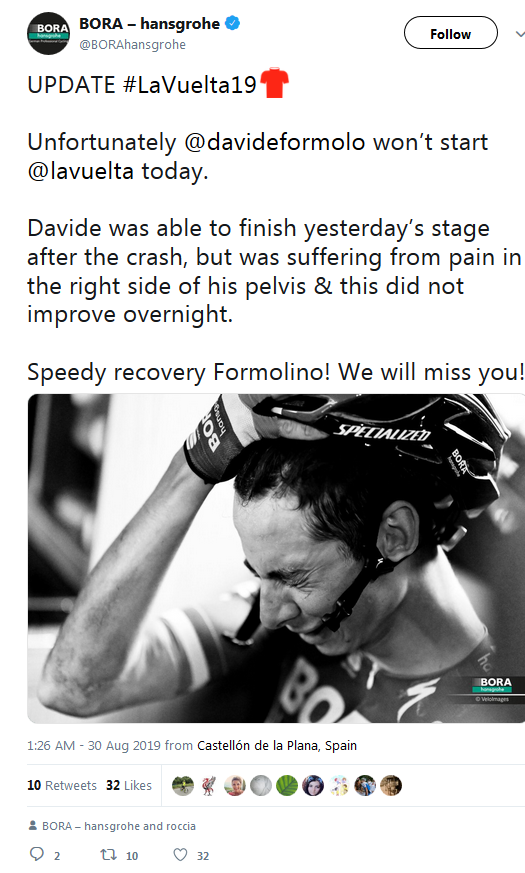 Gigs_98 said:
This is just exactly the kind of ridiculous stuff I watch the vuelta for.
Click to expand...

I hope Formolo will be ready for the Italian classics and Lombardia at least. I would have liked to see him get another Monument podium.
Reactions: Sandisfan

I hope there are riders left still at the end of the race.

Lequack said:
I hope there are riders left still at the end of the race.
Click to expand...

It would be pretty stupid if there's just one rider left to take any risks, so I suppose we're guaranteed of someone finishing. Unless of course, at some point all the remaining riders take each other out in a crash.

Look who "rode" to the start line 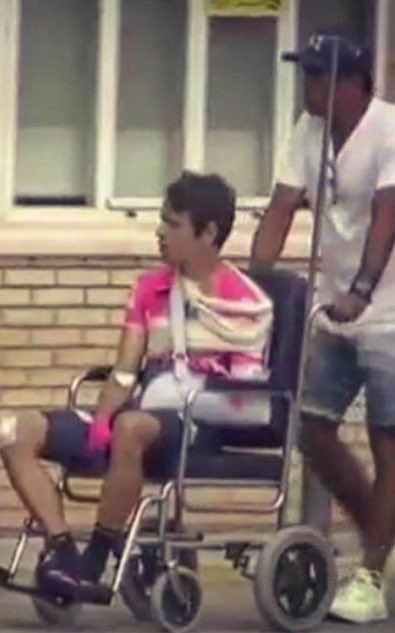 Should be plenty of slow motion action. Sprinters must loathe these stages.
Reactions: Sandisfan

Alberto Condator also fracture his hand at this Vuelta 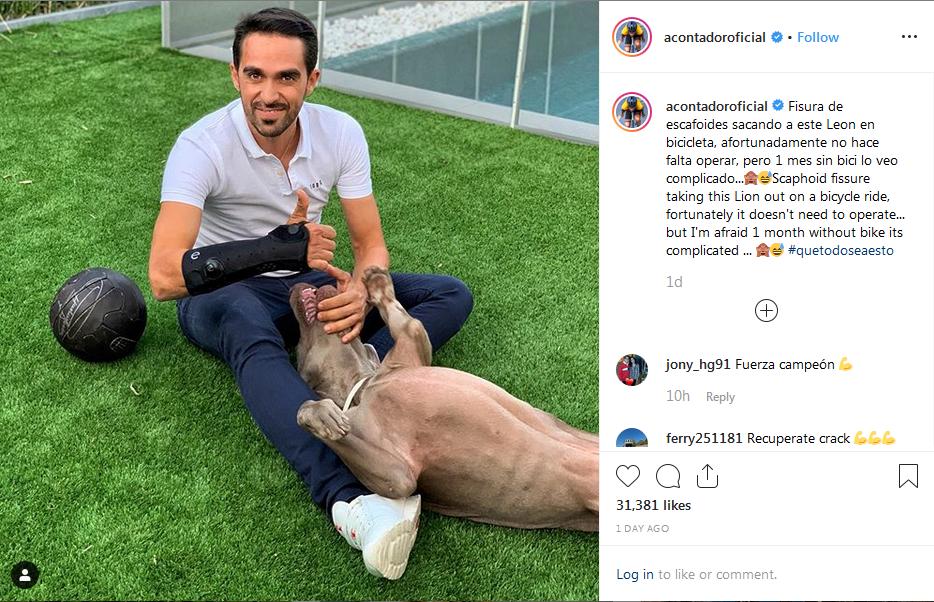 Aru in a bad way too ...did he also crash yesterday

Aru : I managed to get to the front but the pains are widespread and I find it hard to push from the seat. We'll see how the next few days will go, anyway, I try to hold on, as always!
Reactions: Carols
You must log in or register to reply here.
Share:
Facebook Twitter Reddit Tumblr WhatsApp Email Link