The last of the six clear sprint opportunities is also the hardest to control, with lots of small climbs in the second half of the stage.

The first half of the stage is quite easy, with only the climb out of Beranga, as far as the junction to Riaño on the profile below, to contend with.

The sole KOM, Alto de Hijas, comes shortly past the midway point. None of these climbs are difficult on their own, but together they may cause headaches for a sprint field of the quality seen on Friday. 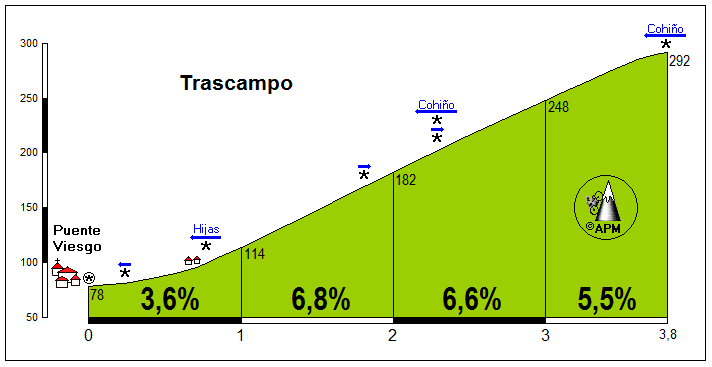 It's followed by Alto de San Cipriano, the same side of which was categorised on the Suances stage won by Roglic last year.

From here, it's rolling terrain all the way to the finish line. The ramp at the start of the profile below is 450 metres at 4.0%, but that isn't the main worry here: the roads aren't the widest or the straightest, especially in the final kilometre which frankly isn't suitable for a race of this size. For reference, this road comes just past the flamme rouge. Let's hope everyone stays safe.

Trentin vs Matthews try to get rid of Jakobsen and someone else wins
Reactions: glassmoon, gunara, Sandisfan and 2 others

Yeah undoubtedly some teams should be interested in dropping Jakobsen, and I'd probably do it on Hijas already.
Reactions: SHAD0W93

How about... Cort?
Reactions: glassmoon, Jungle Cycle, Sandisfan and 1 other person
I

Just keep the GC guys safe and we are good.
Reactions: Carols and Sandisfan
M

Storer will like the look of this one although harder climbs would suit him better. Can't see the sprint teams controlling this stage.
Reactions: Sandisfan
H

Would be a nice novelty to see Matthews try to hit the break rather than put his whole team through a fruitless toil in the heat to control the race.
Reactions: glassmoon, SafeBet, movingtarget and 1 other person
I

hayneplane said:
Would be a nice novelty to see Matthews try to hit the break rather than put his whole team through a fruitless toil in the heat to control the race.
Click to expand...

Lequack said:
Carlton Kirby sure has some girly notes (not that that's a bad thing)

Love those notes. Indeed like done by a 12year old girl (not me, mine would never have looked so neat). It's definitely something he's good at, maybe he can use that to switch to another job.
Reactions: Lui98, glassmoon, movingtarget and 1 other person
B

movingtarget said:
Storer will like the look of this one although harder climbs would suit him better. Can't see the sprint teams controlling this stage.
Click to expand...

I've had a flutter.

It doesn't look like a super predictable stage. It's one of those "bet on everyone but Matthews" ones.
Reactions: movingtarget

It's Jakobsen's birthday, and in the interview he just said that the team will do everything they can to get him on the podium today. Also Matthews was skeptical about much of a selection. According to him there are plenty of sprinters' teams willing to control, and on the final climb a head wind is likely to prevent any action
Reactions: CyclistAbi and BlueRoads

Also there is some wind today

Hopefully they don't start falling off like that new helmet he decided to test out on the Planche TT
Reactions: Rollthedice

Crash in the peloton.

If it it’s true that DSM and FDJ are riding at the front and controlling the break then they are really thick. Too thick for words. Maybe someone should tell them that Jacobson is the fastest sprinter in the field and it is quickstep’s job to control the stage
C

Rackham said:
Crash in the peloton.