Is it Bjarne Riis at Hautacam showing what a 60% crit can do?

Ricco riding up the Pyrenees on the 54?

Rasmussen and Contador sprinting up hill in tandem?

For the record my personal unbeatable classic has to be Lance @ Sestrieres in 1999.

The cream of established doped up Euro talent sprinting furiously in the slipstream of Lance, all of them going so fast that if you tilt your head it looks like a breakaway in a criterium. Lance looking cool and almost apologetic....when he rides away from them I swear he has to feather the brakes in the first corner....hilarious!

I know that the guys in the press room were cracking up - things had suddenly gotten back to 1998 levels of ridiculousness.

Never seen a sprinter chase down another sprinter, and put ten lengths into the bunch, in the last 250 metres.

Cav riding 260 kms, is not credible, even accounting for the first 100km piano tranquillo, but that sprint was something else.

2005 Vuelta a España. Second to last day. A nearly 40 km ITT. Not uphill! And somehow Roberto Heras manages to be almost even with the first place time, getting second in the TT and 'winning' the Vuelta (well, at least for a few minutes )

My favourite part, this caption "Roberto Heras (Liberty Seguros) may be a lightweight, but today he rode faster than anyone in any grand tour long TT, save for Ruben Plaza", found here. Just for fun, check out the other results. Some serious doping that year from the looks; one wonders how much Roberto was taking.
J 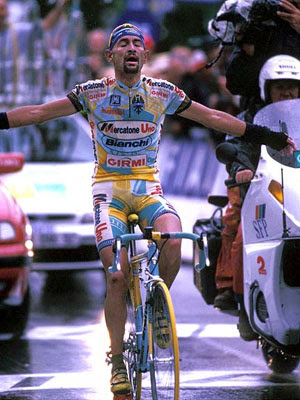 Rasmussen Contador in 2007 was hilarious. They looked like they had rockets propelling them.
Contador on Angliru.
Vino Albi TT.
Lance 01 Alpe.
Lance 03 Luz Ardiden.

My favourite though is Jan on Andorra 1997.

Special mention to Di Luca sprinting up mountains at this year's Giro.

This is one of the more novel threads in The Clinic, I must say.

I'd have to say that I was much more gullible in my earlier years of watching this sport so a lot of the stuff that jumps out to some was pretty much lost on me. I just didn't see anything out of the ordinary...ignorance is bliss they say.

So I'd have to go with one of the OP's suggestions of Ricco in the Pyrenees...I recall at one point he was just looking back and smiling as he just accelerated away from everyone.

To a lesser extent, Contador beating Wiggins in the prologue...because the optimist in me wants to believe he's clean, but the recently discovered skeptic in me does wonder.
A

Leipheimer riding the last TT of the '07 tdf faster than Indurain had ever ridden a TT.

Contador in the last TT of this year's Tdf.

Moller said:
Contador in the last TT of this year's Tdf.
Click to expand...

This one is definitely up there. Looks like the extra work on his TT effected neither his climbing nor his ability to accelerate 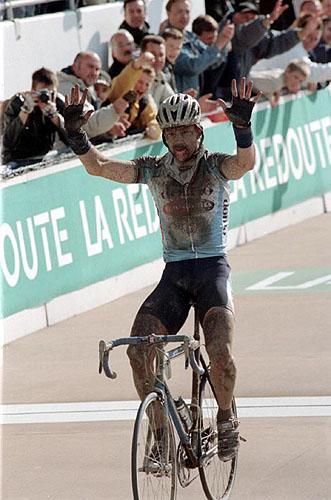 Pantani at Les Deux Alpes also does it for me. It was a legendary day with horrible weather. That day will always stick in my mind.

Was it the 2004 Tour de France that Lance caught Jan in the opening time-trial. I just remember thinking, **** the Tour is over on the very first day. God, those were boring races.
A

She's like 50-something now, right? That's a loooong career.
D

pmcg76 said:
Pantani at Les Deux Alpes also does it for me. It was a legendary day with horrible weather. That day will always stick in my mind.

Was it the 2004 Tour de France that Lance caught Jan in the opening time-trial. I just remember thinking, **** the Tour is over on the very first day. God, those were boring races.
Click to expand...

05. Jan looked like he was grinding two rocks together.

Certainly a different angle on the matter.
Although she did most likely turn in a doped performance.

They didn't call him 'Tricky D!ck' for nothing!
Perhaps he should have gone to work with Ms. Hartley in a more respected profession.

Digger said:
05. Jan looked like he was grinding two rocks together.

My goodness I don't see how anybody could have taken that seriously. The commentating is emberassing.

What, no mention of Floyd yet? Wow, there's so many to choose from.
Iban Mayo '03, superb. Tyler, also very impressive that year.
Ivan Basso 2006 Giro, totally dominating.

Man, I could go on all day. Pantani and Armstrong duelling in the mountains. etc. etc. etc....
M

I'm amazed nobody has cited stage 17 yet. Nothing can compare with Mr Jack Daniels, IMO.
Mind you, Gweiss was something special, even in the EPO golden era.

Steel4Ever said:
Certainly a different angle on the matter.
Although she did most likely turn in a doped performance.
Click to expand...

There's a lot of power in those thighs! Sheesh!

I just love how her and her...ahem..."team-mate" have matching kits! Seems as though the 80's were big-budget across the board!

So many to choose from. My favourites of the past few years are Contador & Rasmussen toying with the field (and the mountains), Ricco & Pantani get a nod for pure obviousness and arrogance, Basso dominating the 06 Giro, and Ivan also gets an Oscar for being so convincingly indignant when Simoni called him an "alien".

But I add my vote to Armstrong on Sestrieres 1999. Was that a mountain? That is how I ride on the flats! And the way he rode away from a highly suspicious Escartin... well that was truly a top fuel performance.

I'm going to stick with "known" to begin with. And that's the 1998 Tour de Romandie. This race was a testing ground of sorts for Festina, two months before Willy Voet was busted. Riders were going uphill so fast they had to often jam on the brakes before going around corners (similar to what others are saying about 1999 Sestriere).

Pantani completely crushing everyone in the 1999 Giro, before being busted.

1996 Tour was interesting too.

I'd say Floyd's 2006 Tour win, but I liked the way he gutted it out with great strategy. Both exciting racing, and a great "dirty performance".

Hamilton's broken collarbone 2003 Tour. He was one doped up puppy, though he did tough it out.

Leogrande going from being an average racer, to cleaning up at Superbike 2007.

As to "highly likely", the 2005 Tour prologue was something. Most of the 2004 Tour. The 1992 first ITT at Luxembourg where Induran took five minutes out of most everyone else. Lance chasing down Pantani on Ventoux. Lance 2009 Giro and Tour as well.
B

Lots of good ones already posted. It's really hard to choose from them all, but for me it's Riis at Hautacam in 96. That was before I lost my innocence in 98 (the doping one, the other is a bit over a decade earlier ). The way he moved backwards in the group to look at everybody and then rode past everybody was just mind blowing. As a Dane I cheered and yelled at my TV with joy. In 2007 with Rasmussen I just shook my head in disgust.
You must log in or register to reply here.
Share:
Facebook Twitter Reddit Tumblr WhatsApp Email Link