Page 142 - Get up to date with the latest news, scores & standings from the Cycling News Community.
Sidebar Sidebar
Previous Next

I will not entertain any thoughts of Cav retiring after what came out of Lefeveres egotistical mouth.
Reactions: SHAD0W93 and jmdirt
W

Red Rick said:
I will not entertain any thoughts of Cav retiring after what came out of Lefeveres egotistical mouth.
Click to expand...

Red Rick said:
I think there's both a bit of a disdain for sprinters and a deification of Merckx in particular. Some other sports do it with the earlier legends too. But let's be real. A bunch of Merckx wins were half stages, and he rode in days when a bunch of riders were semi-pros at best.

There seems to be this underlying idea Cav wouldn't be worthy of the stage record for some reason, or that he's unworthy of being a legend of the sport in his own right.
Click to expand...

Let's be real. Cavendish got at least one win after missing the time cut. All of his wins were in bunch sprints. Most of them in pan-flat stages. The vast majority of the stages he won were thanks to relying on a wonderful train (HTC back in the days, Deceuninck this year). If we were to point out the flaws in the wins leading up to the record, Cavendish surely won't look better than Eddy.
Reactions: inri2000 and 70kmph

With Greipel retiring, what are the chances of him heading to ISN?
Reactions: Eeslliw
C

Avoriaz said:
With Greipel retiring, what are the chances of him heading to ISN?
Click to expand...

I have to say, I would enjoy watching Froome helping Cavendish beat the time cut in the mountains!
Reactions: FroomeWagon, Leinster and spalco

Tour's over. Great run for Cav and enjoyed it. Sad that he couldn't make it a total fairytale on the Champs Elysee but oh well. Can't have it all.

With the way Quickstep operates, i expect him not to get an extension for next season unless there is an external sponsor willing to step up.

Great comeback show and one of the highlights of the storylines this TdF.
Reactions: SHAD0W93, jmdirt, spalco and 1 other person
L

canarydan23 said:
Although personally as a big Cav fan there is a part of me that would like this Tour to be the end of his TdF career; 4 time stage winner and green jersey winner, even with another fortunate set of circumstances it's almost impossible that he'll repeat that next year and pretty unlikely he'll grab one stage win, never mind multiple. Wouldn't it be better if this was his last Tour de France, rather than a potential dud?
Click to expand...

If he goes back to Bahrain for next year he'll win 5 stages, including one in the mountains. And one with a 25km solo.
Reactions: SHAD0W93

Of course no Vuelta but it’s okay. I honestly think he never really enjoyed racing there. Hopefully Jakobsen wins some stages. If he races next year I think going to the Tour depends on how he performs. If he is still able to win before the Tour I think he should go. Maybe even do first week of Giro and see how he does. Four is still good and green is wonderful. Maybe the mountains took a lot more out of him than he let on. Honestly as long as whatever team he goes to keeps him out of the wind, helps with the stage, and gets him to the final km he’s good. The first two stage wins was him surfing wheels and coming from far back so he could win on the first week of still in this form.
Reactions: jmdirt and spalco

Roku said:
Let's be real. Cavendish got at least one win after missing the time cut. All of his wins were in bunch sprints. Most of them in pan-flat stages. The vast majority of the stages he won were thanks to relying on a wonderful train (HTC back in the days, Deceuninck this year). If we were to point out the flaws in the wins leading up to the record, Cavendish surely won't look better than Eddy.
Click to expand...

Is there anything wrong with flat stages and sprints?
Reactions: jmdirt, Wyndbrook, RedheadDane and 1 other person

Red Rick said:
Is there anything wrong with flat stages and sprints?
Click to expand...

I will save this for when you comment on the next TDF route reveal.
Reactions: Lui98, roundabout, Jungle Cycle and 2 others

SafeBet said:
I will save this for when you comment on the next TDF route reveal.
Click to expand...

In race design, obviously. But I think it's a bit ridiculous to blame a sprinter for winning sprints and taking a record that way. The record is specifically about Tour stage wins, with no style points attached, and nobody uses that record to prop up Cavendish as a champion like Merckx anyway.

Cavendish is already hurt in his palmares by being a sprinter in that he can't win stage races of any prestige and that he can't win most classics of any prestige. But there's nothing wrong with the best sprinter in the sports history taking the Tour stage record, considering for Cavendish winning Tour stages is the main reason sponsors want him while for Merckx winning Tour stages was something he did on the way back from the bakery.
Reactions: perico, PlanZ, jmdirt and 4 others

“Yes I’ll like a side of Tour de France stage win with my blueberry bagel and chocolate donut. No no take your time, the other riders are hours behind.”
Reactions: jmdirt, Lui98 and Red Rick
L

Before this Tour, I would’ve been one of the on-the-fence types re Cav being the best sprinter ever, but I think the book is closed on it now.

When I was a kid watching Abdu, Jalabert, vanPoppel (sr) etc winning bunch sprints, the almost mythical target was Andre Darrigade and his 22 sprint wins. This was considered a separate record to Merckx’s 34 stage wins, because every record in cycling needs to be placed in an “other than Eddy Merckx” bracket really.

Cav blew past Darrigade’s record on the Champs in 2012, and kept going. He hit some leaner years in the mid-2010s when Greipel and Kittel started pulling in big stage hauls, and Sagan owned the green jersey, but to come back after all that, and produce the Tour he just did, is a phenomenal effort.

I made the point earlier in this thread that when you look at Cav’s 2nd, 3rd and 4th places at theTour, they’re almost all behind some combination of Kittel, Greipel, and Sagan. It’s pretty good company to be losing to, and now we can add VanAert (ok, and Philipsen) to the list. And he also has his SanRemo and Worlds wins, which only the tippiest-toppiest of other sprinters can boast (Like Cipo. Darrigade also had a WC and a monument; Lombardia, in a bunch sprint on the Milan velodrome, back when it was a very different race to the climbers’ classic of today)
Reactions: jmdirt and SHAD0W93

With all due respect, that does not make any sense. The palmares is limited to someone's ability. It would be like saying Mads Kaggestad was already hurt in his palmares by not being able to win anything apart from Ringerike GP. (Weird enough I remember him from early 2000th Cycling Manager games and looked up his career profile a few weeks ago)

Discussing simply about sprinting, there are several prestigious races that can be won by sprinters. MSR is one of the most prestigious races in the season and it is usually won by a sprinter. Scheldeprijs, KBK and París Tours (the latter until the change of route in the late 2010s) are other relevant sprint classics. TdF green jersey is highly valued. Every four/five years there is a chance for sprinters to win WC... In fact, sprinters can win a sh*tload of races throughout the season, while other riders have much fewer chances. A third tier sprinter can grab a few victories per season, which is highly unlikely for a third tier climber or hill specialist.

For instance, 7 of the Top 12 riders by wins this seasons are pure sprinters, including someone like Phil Bauhaus who is a third tier sprinter.
Reactions: jmdirt and roundabout

Sprinters have won Roubaix and Ronde as well in the not so recent past.
Reactions: jmdirt

I can see the discussion about the definition of sprinter coming a mile away...
Reactions: jmdirt, Red Rick, Lui98 and 4 others
L

“Tommeke had an ok palmares. For a sprinter.”
Reactions: SHAD0W93, King Boonen, jmdirt and 1 other person

King Boonen said:
I can see the discussion about the definition of sprinter coming a mile away...
Click to expand...

King Boonen said:
Chris Hoy would win Ronde if he bothered to try...
Click to expand...

Wow, no love for the God of Thunder smh


I will say he probably has my favorite celebration wearing the national champs jersey and winning the cobbled stage in 2010 Tour beating on his chest with Phil and Paul screaming it’s the God of Thunder!
Reactions: jmdirt, Andy262 and Red Rick
C

CaV wOuLdN't HaVe EvEn BeAtEn MeRlIeR iF hE dIdN't HaVe To PlAy LeAdOuT tO pHiLiPsEn. 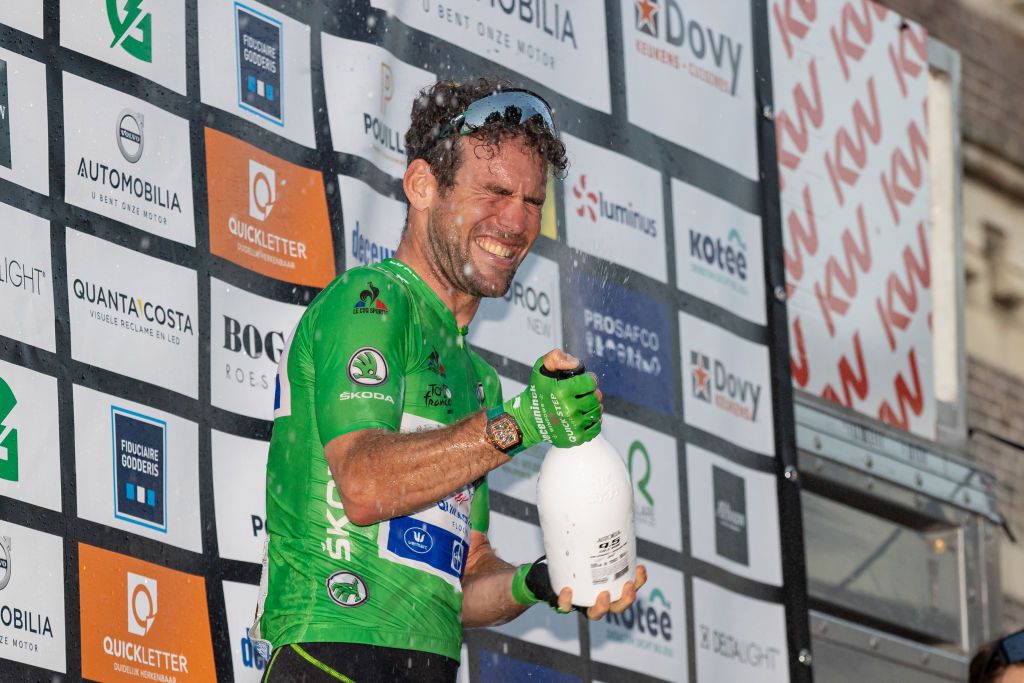 canarydan23 said:
CaV wOuLdN't HaVe EvEn BeAtEn MeRlIeR iF hE dIdN't HaVe To PlAy LeAdOuT tO pHiLiPsEn.

Not 4 times he would have. Merlier is clearly quicker than Philipsen, but as shown in both the Giro and the Tour he can't get over mountains so he'll always have trouble making the time cut 3 weeks straight.
Reactions: jmdirt
You must log in or register to reply here.
Share:
Facebook Twitter Reddit Tumblr WhatsApp Email Link