The other Belgian sprinter-friendly semiclassic that often sees big crashes. At least this one has the route to provide moderately interesting racing after the broadcast has started. It's also a bit of a historical moment, with the prize money being equal for the men's and women's races. 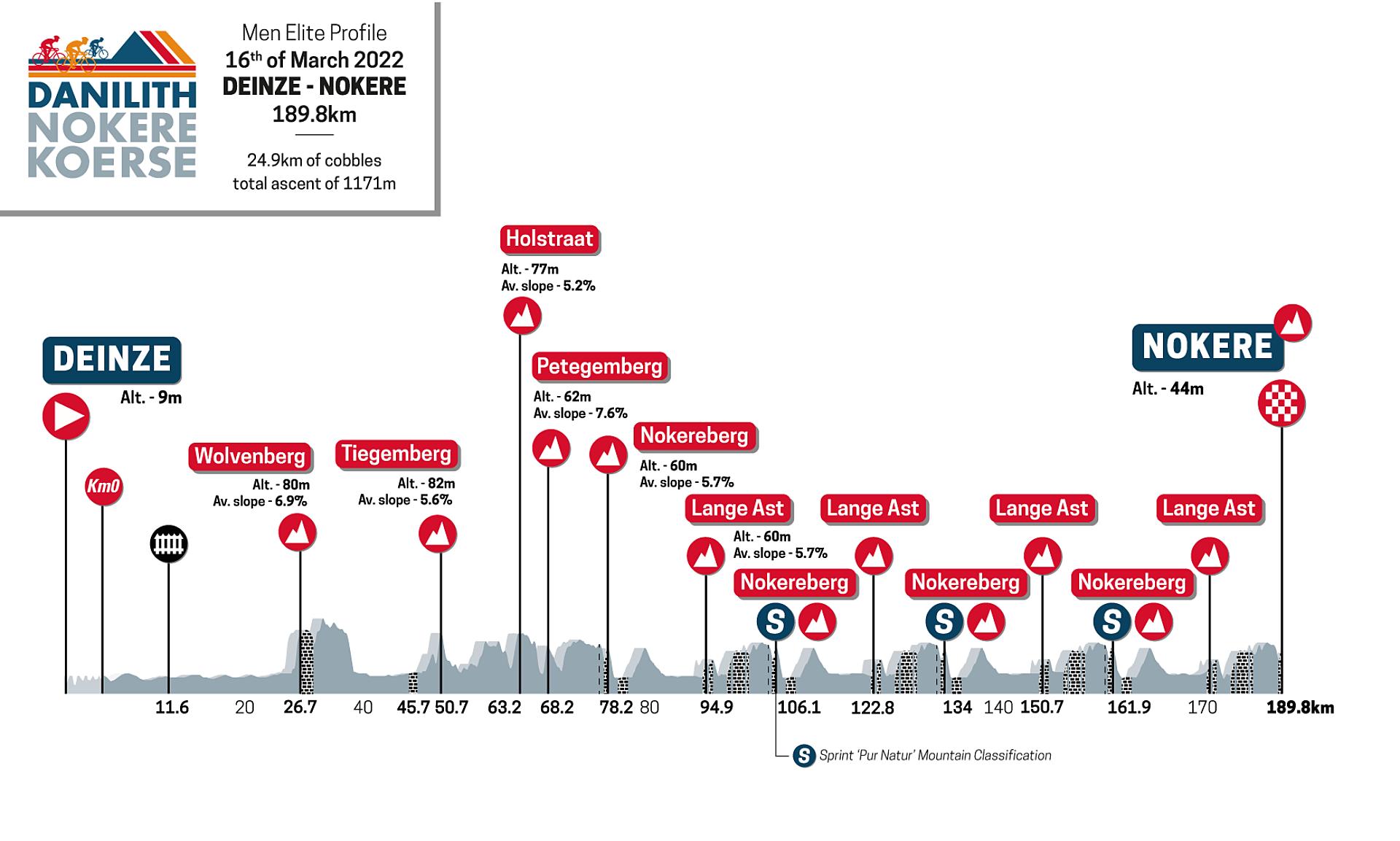 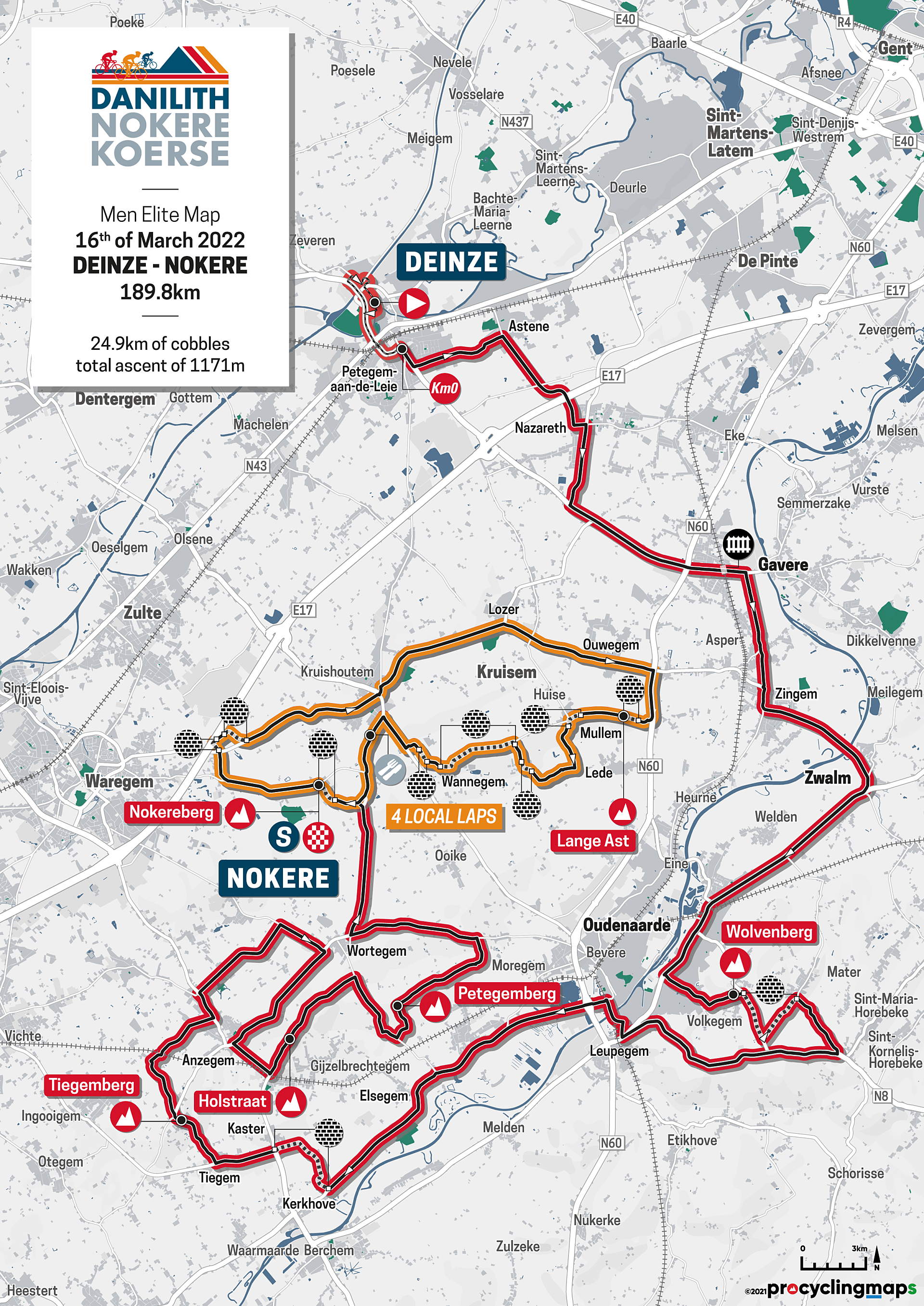 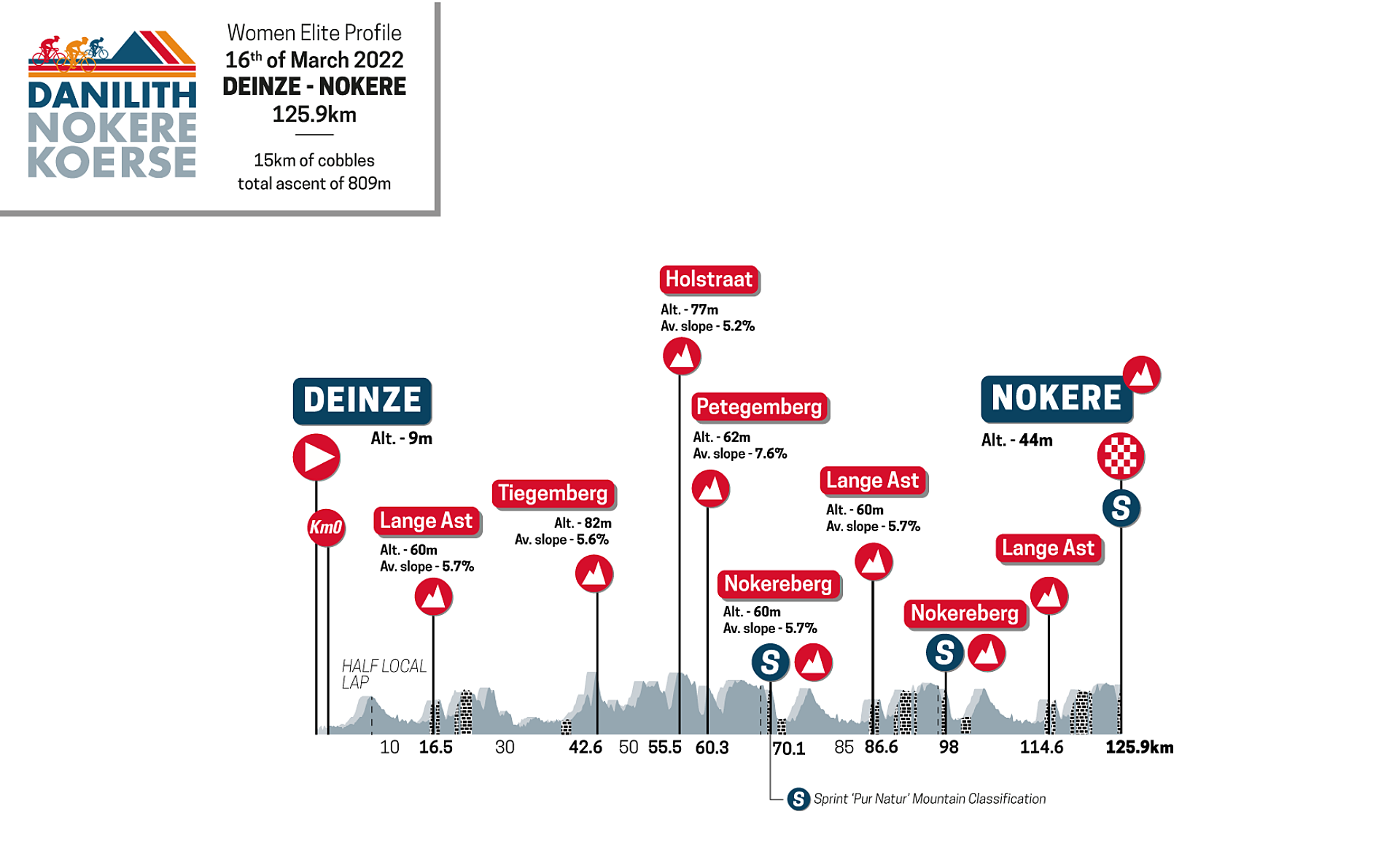 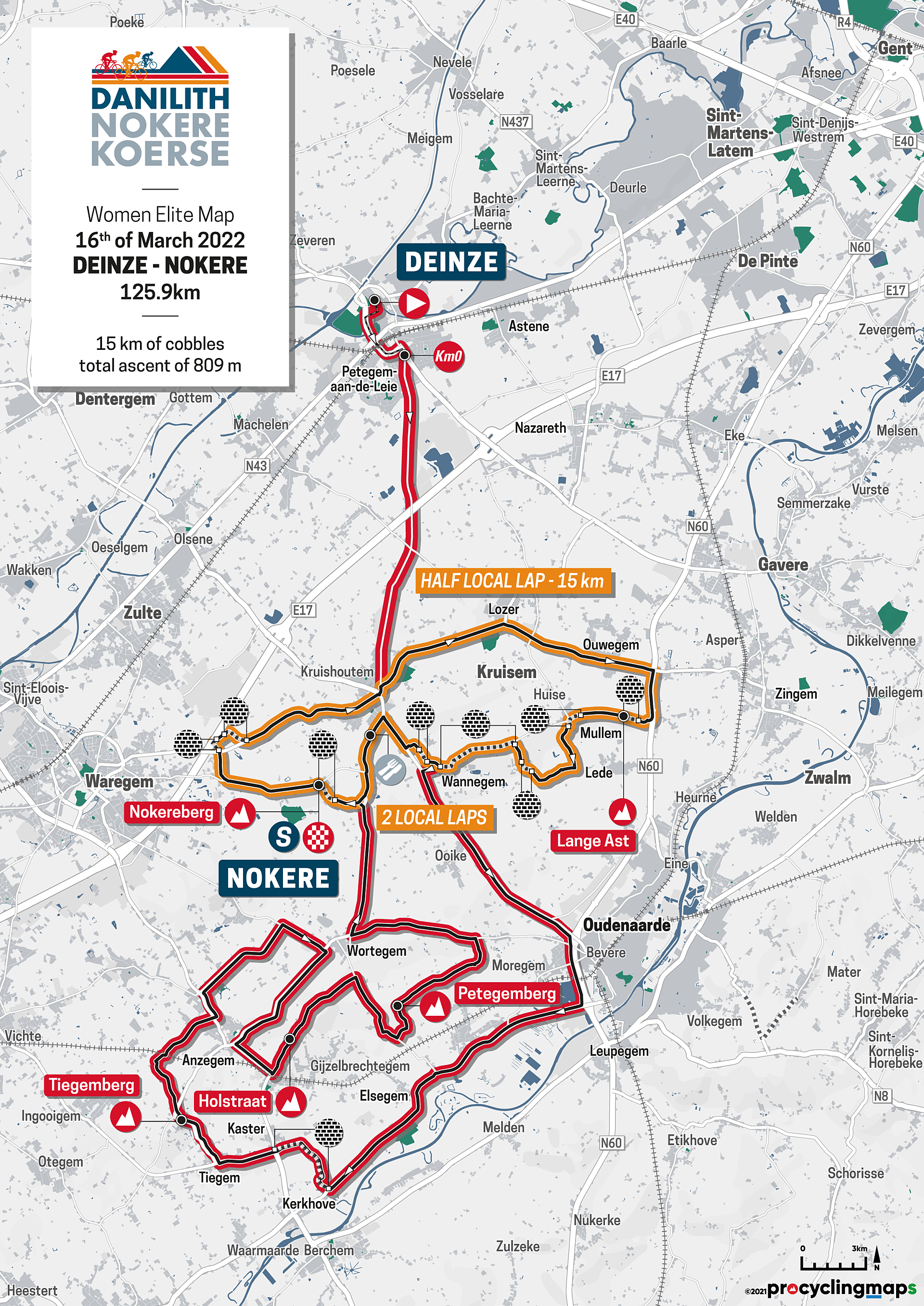 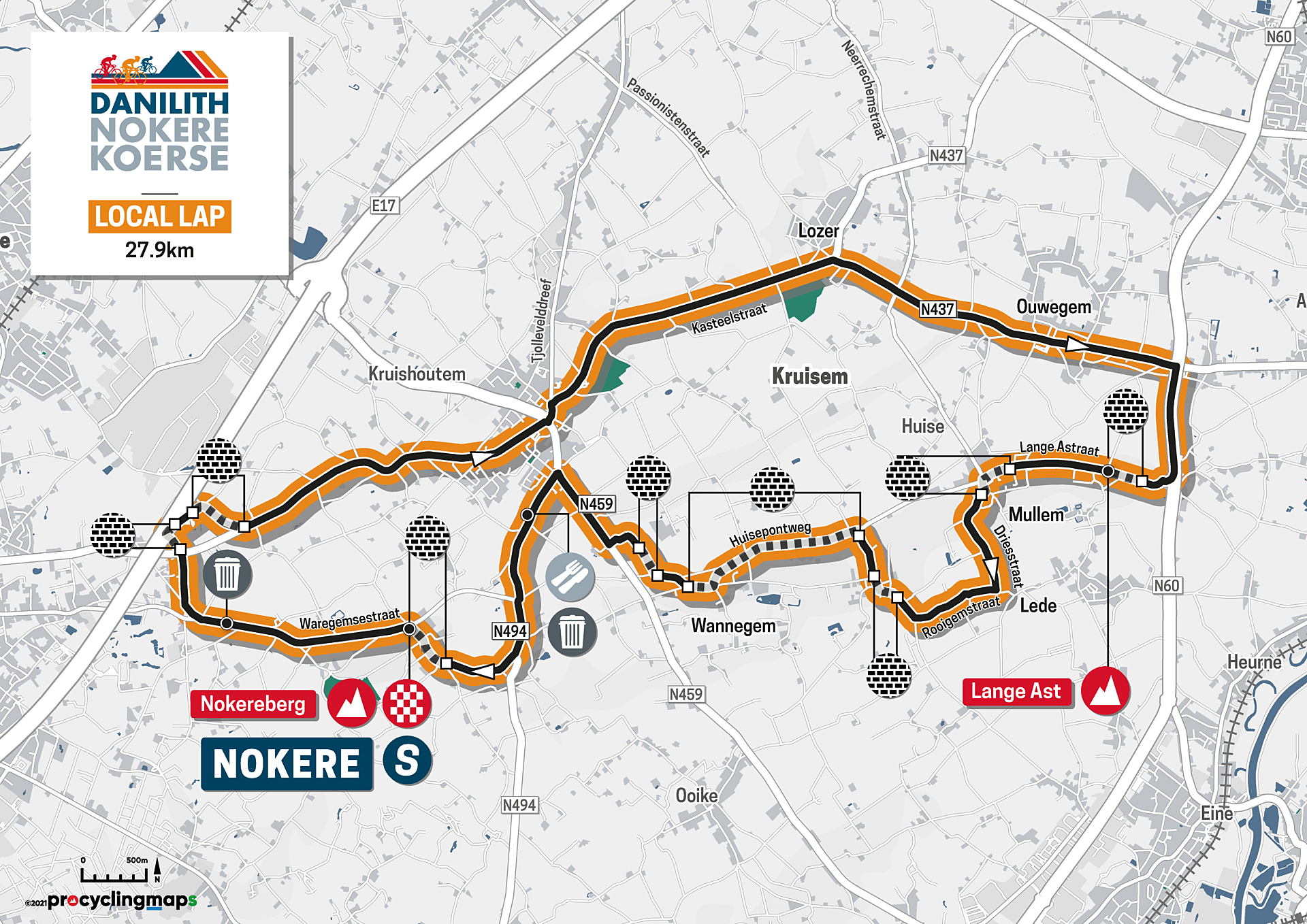 From the finish line, they first head to the cobbled section of the Herlegemstraat, the final difficulty of Dwars door Vlaanderen. Don't expect any rough cobbles at this race, it's all pretty manageable. This is followed by a long flat section on relatively wide roads, one of the key reasons why (in the men's race) most sprinters usually survive this finale. Either way, eventually they turn onto the Lange Ast, on cobbles between 250 and 700 metres on the profile below.

From here, cobbles are almost the norm, but they're usually easy, also by Flemish standards. First those in Huise, then in Lede (between 250 metres and 450 metres on the profile below)...

...then the longer Huisepontweg, followed almost immediately by the very short, but very narrow Hoevenstraat. After this it's a return to paved roads, narrowing inside the final 2 kilometres as they approach Nokere. The road dips downhill in the final kilometre (700 metres at about 3% - a key factor for crashes, recall the time we briefly thought Mathieu van der Poel's spring was over after being escorted by ambulance upon going down here, only for him to win Dwars, Brabantse Pijl and Amstel) to the foot of the cobbled Nokereberg, the traditional finish of this race. Ignore the elevation marking for the finish line, you can see from the y-axis that it's wrong. 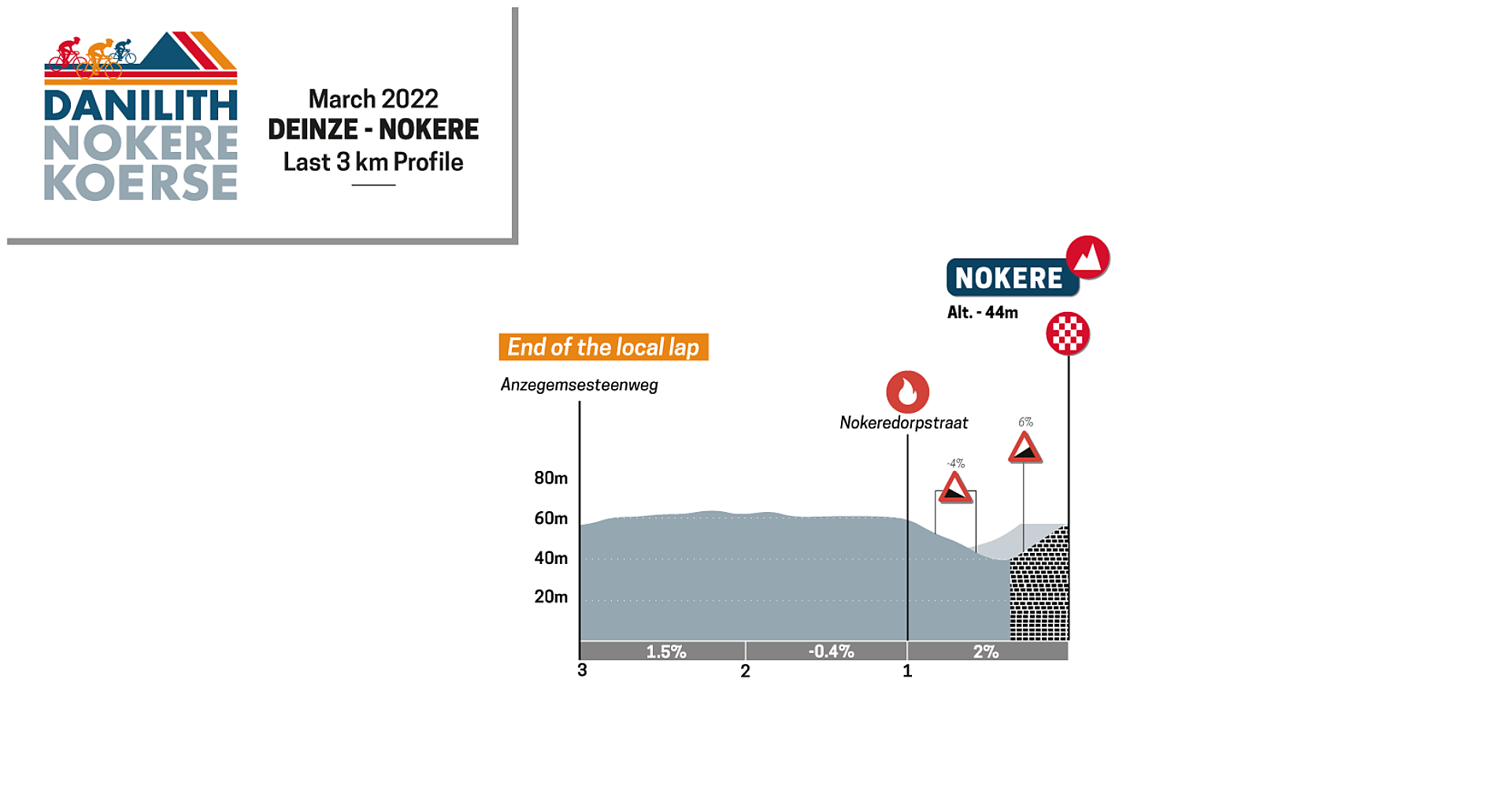 So Merlier for the expected favorite win, or will young De Lie go 3 for 3? Or is this finally Hofstetters day to exclude him from the most top tens competition?
Reactions: Sandisfan

Devil's Elbow said:
It's also a bit of a historical moment, with the prize money being equal for the men's and women's races.
Click to expand...

It's also the first edition where the women's race has live coverage.
Wiebes is the hot favourite, if DSM are able to keep it together for a sprint.

He we go live: Nokere Koerse
No break away ladies?

At no point did it look like the women weren't going to have a bunch sprint, most teams have raced very passively. All the cobbles bar Nokereberg done now.

And then Wiebes won by about five bike lengths, not sure why so many other teams were happy to go for the sprint given that Wiebes was isolated but whatever.
Last edited: Mar 16, 2022

Devil's Elbow said:
And then Wiebes won by about five bike lengths, not sure why so many other teams were happy to go for the sprint given that Wiebes was isolated but whatever.
Click to expand...

Some of the most bizarre tactics, I've seen for awhile - Wiebes had one last team mate for the last 40kms - Any of the WT teams with repeated attacks takes Wiebes out of the picture.
Z

I dunno, maybe they all just really enjoy the spectacle of a sprinter disappearing into the distance and winning by 40 metres.
Reactions: Sandisfan

If the women's race is any guide there will be a ton of crashes.

Btw, you know you're far and away the fastest when it looks like no one else even tries to go with you
Reactions: Sandisfan

Probably just going to be a bunchsprint with a massive crash.

Every time I see a wheel change like the one of Miles Scotson, I honestly think they better change the whole bike or go back at rim brakes. That took around 30-35 seconds.
Reactions: Sandisfan

In general the Belgian cobbled races below RVV, E3 and GW need a revamp. Kuurne is fine for what it is, but the Omloop and Dwars routes have become quite poor, Samyn is unique but less selective now the peloton is used to the current route, and the smaller Flemish races are all various degrees of uninspiring. Hageland and the Primus Classic are both pretty good but neither are especially reliant on cobbles anyway, it's mainly Oost- and West-Vlaanderen where mediocrity is the norm (also because there are just too many samey races in the same small part of the country). This race pitches itself as the Flemish Paris-Roubaix which is laughable.
Last edited: Mar 16, 2022
Reactions: Sandisfan

Just like in the women's race there are very few teams trying to prevent a sprint when there really aren't many potential winners in a sprint here.

Merlier, in front of Walscheid and De Lie.
Reactions: Sandisfan

Merlier ahead of Walscheid. De Lie and Vernon couldn't follow at all, let alone the rest.

Not sure who was more dominant, Wiebes or Merlier.