Page 4 - Get up to date with the latest news, scores & standings from the Cycling News Community.
Sidebar Sidebar
Previous Next
B

There is some serious next-level trolling going on in this thread.

Phil placed 60th in the Belgian Waffle Ride recently. Tough race, but he was an hour behind the winner. Maybe he boosts for Strava glory but by all accounts he's not exactly trimming the field in the events he's participating in.
N

I just find him unamusing, regardless of what he's putting in his body.

He seems like a guy who is not particularly suited to host his own show, which brings a different meaning to what it s called. He kinda comes across as self-absorbed, what with constantly interrupting those he is speaking with, jokes that fall flat, etc.
Not my cup of tea, but hey, whatever floats your boat. Good on him for being able to make a living doing what he s doing.
Speaking of audience, I was intrigued to hear he has tentative plans to make the 2020 Olympic track team, so I moseyed on over to see a video featuring Phil riding the track for the first time in more than a decade.
Seems he picked up right where he left off and posted times in the 4 km pursuit that would have won medals in previous Olympics.
Whaddaya know!
What started as a lark has now become his focus.
Best of luck, buddy!
N

I know Phil like third hand through some folks. His time was good enough for 3rd at US Elite Nationals, which isn't the deepest pool, but was a nice elite level time (4:30.6). Not exactly Boardman '96, but fast. That said, if you've watched any of his climbing data, he's well suited for pursuiting, he's got a high max aerobic power, and his raw numbers are big. Him making the olympic team, is a long shot, mainly bc the US qualifying is a long shot, but I think if the team qualifies, he has a good of a shot as anyone to make it. He'll probably need to lift weights, as modern team pursuit starts and speeds require turns at close to 800-900w for 14 sec, but his aerobic base should allow for that.

Not a good day today. Ouch. 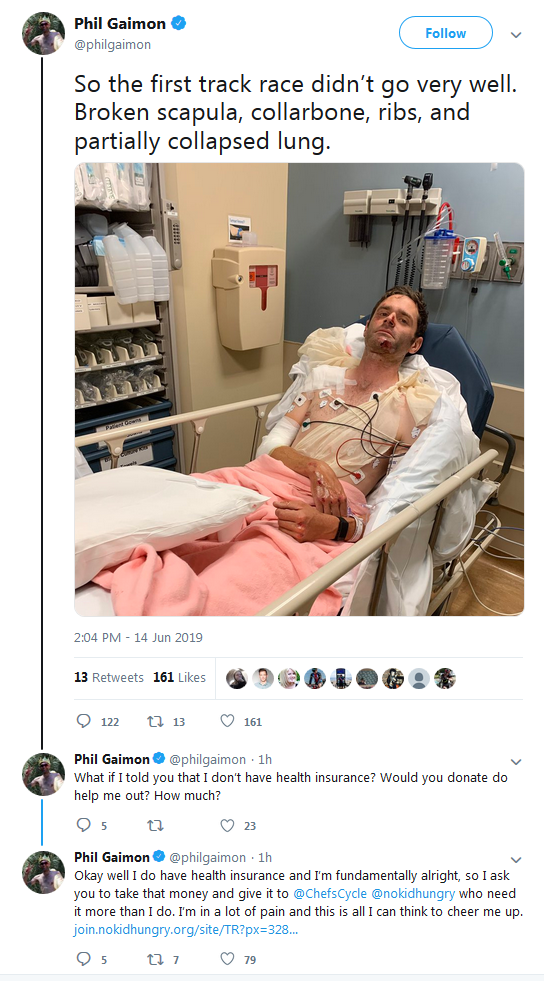