Page 307 - Get up to date with the latest news, scores & standings from the Cycling News Community.
Sidebar Sidebar
Previous Next

As stated, I don't really think it's a problem, it just got me wondering.

As for Tonton's objection to the ITT, I don't think gaps would be smaller if you took the route over Fontbelle and Bonnet, at least not to Dumoulin. Luckily, it's not after a rest day, eh. But while I like long and tough ITTs, it shouldn't be at the cost of the race's proper flat ITT. 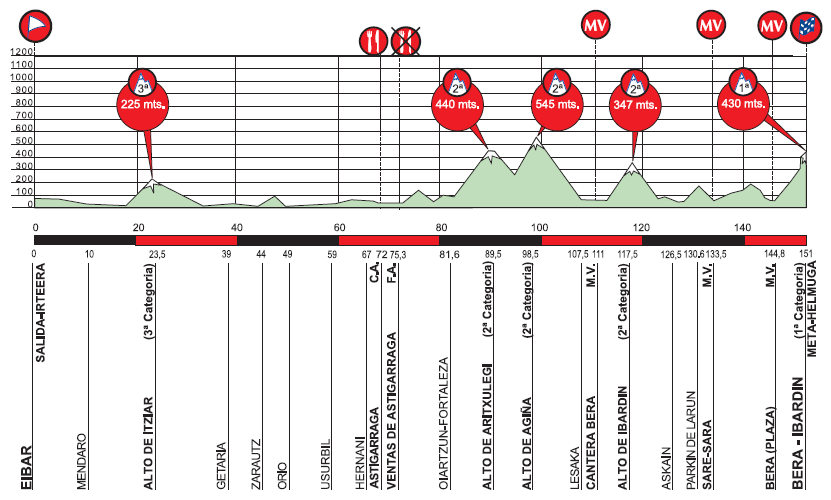 Do you know where the finish line was? As it was not at the pass, I'm unsure of the exact location.

Well, after they turned left at the pass, the road through Ventas de Ibardin actually is the border for much of the journey through the village. The actual finish was at the little opening between Venta Elizalde and Mendimendian Benta with the presentations done in the car park behind that. Mendimendian Benta is in Spain although it is north of the road, the only such case in Ibardin, so the last left-right flick corners take the road back into Spain after being on the border, so the finish was about 20m from the actual national border, but the presentation was held on it.

Netserk said:
It's funny, Mayomaniac, the week following the Tour route presentation, I created my own route as a response to what I didn't like about that route (but overall I had mixed feelings as there were a lot of good stuff too), and while the overall structure and balance is somewhat similar, the only start or finish town we share is Paris and the 7 passes we both use (5 in the Pyrenees, no surprise) are all opposite sides. With your route being counter-clockwise and mine clockwise and the both of them together covering most of France, they fit perfectly as successive editions! Only trouble is that we both omit Pau, which is a bit unrealistic as we haven't had two years in a row without the city since '69, '70. The horror ...

First for the overall impression: As for balance and overall structure, it's obvious from my first paragraph that I'm quite happy with that. Your route is a bit short though: Overall distance is ~3300 km. Not trusting Cronoescalada's categorization of climbs and not having yours, by my own count you have 30 climbs, 10/12/8 (HC/1st/2nd). It's the same as this year's edition had, but with twice as many HC climbs. 2018 was the edition with most HC climbs (9) and a total 26 climbs of cat. 2 or higher, so you are certainly not lacking in that department. I personally think that is quite fine, especially so with a more normal amount of TT'ing than in recent years. I too share the view that we need more of both, but it does make it hard for me to suggest changes that would add to the tally.

It's a good domestic Grand Depart, and I can definitely imagine something not too dissimilar happen in the future. But I have to object to the finish of your 2nd stage. I don't think the short finish circuit can work in this context. Just like the 2018 edition had a Tour du Finistère stage that was modified so it was without the small circuit in the end. I think the larger circuit is quite fine. I don't watch Tro-Bro Léon, so I can't say how much else would need modification, but given the rumours in recent years, it's clear that Ribinoù are on the table.

While I know of cases nearby, the Tour has never had a finish on a border before and I'm not sure if it's the case with the other GTs. I don't really think it's a problem, but it got me wondering, and I definitely prefer the full Larrau ascent over a finish at Col d'Erroymendi. The next day is absolutely fine, I'm not sure if it's too overused (here) to finish straight after Tourmalet with something extra in-between. Beyrède is always an alternative for either of the two final climbs, but not really a clear improvement.

I have to say that Ventoux here feels a bit weird to me. I appreciate that it serves a function and that it's the rare side, but wouldn't climbing to Chalet Reynard by the traditional side be fine too? I think it makes sense to insert Col de Lagarde-d'Apt afterwards, but I'm aware that it adds to the tally without adding crucial quality to the stage. I think Tonton's idea work too, but I'm not sure what to have afterwards, as it would be pointless to go directly to the ITT.

I don't have anything to add to your Alp stages. I really like your Jura stage and its circuit shouldn't be too short to cause trouble - I think it's an excellent combination of the climbs. My only suggestion would be to change the beginning and go over Sapenay instead (or alternatively move the start to Rumilly and go over Clergeon) and also use the fourth side of Grand Colombier from Anglefort so that all four sides are in use. An illustration.

I missed you Netserk!!!

I took an extra look at your stage 20 as I really like it as the final GC relevant stage, and while only changing a bit in the finale, I've tried to make an alternative with a different start. If you want it longer, it's straightforward to move the start to Saint-Étienne and skip some of the detours after Issoire.

And a more radical alternative, also changing the place of the finish. That has some upsides and some downsides, and is less fitting as the final GC relevant stage, I think:

I'd prefer the first version of your stage.
I'd like to see your Tour de France route.
Overall the Tour route for 2020 would be solid, if it would feature a mid length ITT early in the 2nd week, even one that was just 25km long in the first week would be acceptable. My big fear is that it will turn into a waiting game until stage 15 or even 17.

Given that you sought feedback, I found it only natural to give you that and afterwards some space. Like you, I too have a route with many climbs, and I have been in doubt if I should alter the standards for the categorization of climbs to counteract the inflation that has been going on. I would like you, and others, (perhaps after the publication of my route) to reflect a bit on that, and maybe also on how many is too many? For sure, standards have changed over this decade, and we now see significantly more climbs than during Jean-Marie Leblanc - especially during the first week. Who would have thought that we would see a HC climb in the opening weekend a decade ago :O

I wondered previously if there had been a finish on the exact border before, but especially with regards to finish locations, we've recently seen less restrictions. I think stage finishes as Culoz and Espelette are good examples of that.

I'm a bit mad with the limitation of 20 images per post (this calls for veteran privileges!), as I would prefer to post it in one go (but using the spoiler-tags to not bomb the page). When I figure out how to present it, I will post it. I already have the overall map and stage profiles, but I have also wanted to tweak a few things since then...
Last edited: Dec 7, 2019
M

I've got a few routes for shorter stage races up my sleeves, one of the most interesting is probably my Tour of Hawaii.
The original version had 8 stages, but I've been thinking about cutting it down to 7 stages, you could market it as "the hardest week in cycling".
About placing inmt on the calender, it could take the spot of the Tour of California and teams could also use Big Island fof altitude training camps.

Mayomaniac said:
I've got a few routes for shorter stage races up my sleeves, one of the most interesting is probably my Tour of Hawaii.
The original version had 8 stages, but I've been thinking about cutting it down to 7 stages, you could market it as "the hardest week in cycling".
About placing inmt on the calender, it could take the spot of the Tour of California and teams could also use Big Island fof altitude training camps.
Click to expand...