Page 1197 - Get up to date with the latest news, scores & standings from the Cycling News Community.
Sidebar Sidebar
Previous Next
M

Benotti69 said:
How does a team having 4 doms at 5kms to go when other teams are on the rivet look more human?

They dont. They look positively USPS.
Click to expand...

More human compared to Froome. That was my point. Sky only looked poor because we saw alien domestiquing from Froome in the past. Today, people saw the squad as a shade of that past and call them in poor form, when they are in fact still doing as Sky has always done: bending other teams over and reminding them who's boss (or at least who the boss's family works for).

TO be honest I don't think it means too much, necessarily, that Contador was "isolated", given it's the MTF now, and he can quite easily sit on Froome's wheel and receive all the potential watt savings drafting provides.

Better off letting your riders cruise up the climb and be a bit fresher tomorrow than make them hang around at top speed and not really offer all that much benefit. Sure a puncture could spell disaster, but other than that, I am failing to see their benefit.

Hilly stage again tomorrow, will be interesting to see if my theory holds, and Contador has more riders around him for the mountains and the finish.
F

Yeh, it doesn't really matter., MTF tactics are non existent. But it proved a great leadout for Contador anyway with Porte finally delivering as his domestique. The apparent strength of the team probably hurt Froome in the end as he tried the usual "don't respond to attacks just chill with Richie then I'll bridge" strat a la Oman or Prati di Tivo 2013. Just maybe if he tried to go with Contador immediately he wouldn't have lost as much (or lost more). But just another sign of the absolute inflexibility of the tactics, which isn't necessarily a bad thing as it's perfect 95% of the time but in stark contrast to Contador who will try absolutely everything until he finds a way to win. It would be an interesting world if the Sky GC leader was not in a position of assured superiority and they did bring out the play book (doubtful I guess as evidenced in races for other riders), considering their depth you would expect better chances of getting something out of it than most other teams.
C

Wouldn't be the Tour build up without it.
Gotta love the French press.
Happy days.

Bit unfair to compare Sky's train to Tinkoff when three of the main carriages aren't there for Tinkoff at the Dauphine in Roman Kreuziger, Roche and the 2nd best domestique in the world (behind Porte of course) Mick Rogers.

hrotha said:
At least Nieve was already a very good climber before they signed him. He's one of the few examples to support the "they're rich so they signed THE BEST, of course they're going to be up there" argument.
Click to expand...

Somebody should ask him: "How is it that 1st violin 2nd chair, Mikel"

Fzotrlool said:
Most of their non-Anglos (Nieve, Lopez, Kiry) has always been good, that's true.

I have the feeling that people, including those from English speaking countries, find their Anglo-bots more sterile than say Heano or EBH.
Click to expand...

Froome breaking through at 26 = fraud

Nieve, Lopez, Kiry breaking through at 26 = always been good

I wouldn't say getting 11th in your first GT is comparable to Froome. He seems to be like Sastre in the sense of being best in GTs, so maybe if he had ridden one the year before, he'd have done okay there?

Anybody notice two Garmin riders ahead of Froome yesterday? I thought that was impossible, without, you know...

Ventoux Boar said:
Anybody notice two Garmin riders ahead of Froome yesterday? I thought that was impossible, without, you know...
Click to expand...

No,no in clean cycling era anybody can do this,nothing special.

Funny thing is that Nieve after working so hard,still finished before Anton his former leader.
D

MBotero said:
Funny thing is that Nieve after working so hard,still finished before Anton his former leader.
Click to expand...

I don't think Nieve deserves to be put in the same category as some of the other sky riders ... this guy could climb before 2014. Infact he was already a lot better than Anton in 2013 (in the mountains.) IRC he was 3rd on Ventoux behind Froome and Quintana despite riding as a carrot.

Nieve, Lopez, Kiry breaking through at 26 = always been good
Click to expand...

Kiry's breakthrough came when he won a bunch of Italian .2 races in 2005, when he was 23-24. He started 2006 in similar form and got a ProConti ride where he built on his results before getting the Tinkoff ride in 2007.

López and Nieve did improve at 25-26 like Froome, but there is a difference in the scale of the improvements; López also did not sustain that level, and only in 2011 when Movistar gave him a lot more freedom due to the many disasters that befell them did he look like achieving that kind of level again. He's matched that level since joining Sky, but while being about eleventh in the hierarchy, which is impressive. Nieve broke out fairly late, but with all his best performances being late on in GTs that seems to be an issue of recovery more than anything else. Either way, he hasn't performed appreciably better at Sky than before.

The other thing is, Froome was performing at a level around the same as these guys until 26, but a breakout that sees you make it to 6th in Paris-Nice and 3rd in the Deutschlandtour, or a breakout that sees you finish 12th in the Vuelta (later promoted after García's DQ) and win a stage from the breakaway after your team leader crashes out of the race and the team's stage plan is all about you getting there, is nothing like the same as a breakout that sees a rider coming from that kind of level and winding up indisputably the best rider in the world, demolishing mountains and time trials despite lacking technique, and not breaking out with tactical masterstrokes (Euskaltel's mountain TTT to get the win on Cotobello for example) but with the exact opposite; power in abundance that he had never had before that allow him to win despite appalling tactical racing. They didn't suddenly go from losing 8 minutes on an intermediate stage in Poland to demolishing GT winners on steep mountains and losing GTs on bonus seconds within two weeks.

That's why López, Kiry and Nieve are given more of a free pass than Froome. It really isn't that difficult. If Froome had progressed from 2009 to 2011 his improvement would still have been surprising but people wouldn't be as quick to condemn; and if Froome in 2011 had improved to the fringes of the top 10 and then continued to improve to the point where he now dominates people wouldn't be as quick to condemn either (and the bilharzia story that's as riddled with inconsistencies as Froome was riddled with worms might be more readily accepted). But Froome's transformation was so preposterously sudden it was like a ten year old who can't get past a level on a computer game suddenly enabling God Mode.

Up up down down left right left right B A start, just because we use the cheats doesn't mean we're not smart.

Libertine Seguros said:
Up up down down left right left right B A start, just because we use the cheats doesn't mean we're not smart.
Click to expand...

There you have it, we finally know what Froome is on.
The konami code.
F

Not sure why we are debating riders on the great clean teams of Euskadi and Abarca.

Libertine Seguros said:
Up up down down left right left right B A start, just because we use the cheats doesn't mean we're not smart.
Click to expand... 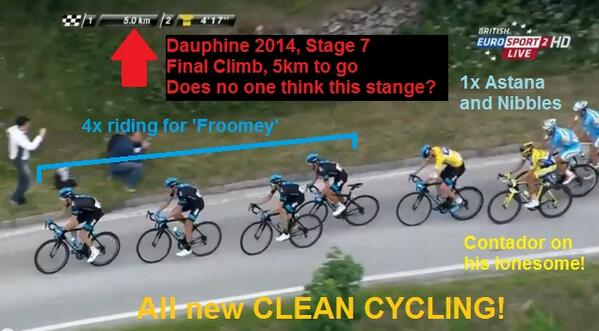 The new "blue train". Just a slightly different shade of the blue we used to see in the early 2000s.

Nieve, Lopez, Kiry breaking through at 26 = always been good
Click to expand...

How many GT podiums did those last 3 manage after "breaking through"?

Pretentious indie snob moment: I had that record at least two years before Juno.

They used to play "Who's Got The Crack?" all the time at an indie disco where I was living at the time.

Peters insists that Leinders was scrupulously ethical in his time with Sky. "We agreed as a team that if a rider, suffering from asthma got into trouble with pollen we would pull him out of the race rather than apply for a therapeutic use exemption on his behalf. "
Click to expand...

Sky are full of Sh!t!

They lie all the time. They are a team of constant massive lies.

According to the TUE thread they confirm that they applied for an emergency TUE for Rigoberto Urán at the 2011 Dauphiné. That is definitely during the timeframe Leinders was there.
R

Froome today - what a joke.
Sad really, to see how an obvious donkey turned racehorse doper reverts back to it's original nature so easily when the juice runs out. Despite being lab skinny, having the glowing Sky team around him, looking at his dope power meter like an idiot. Contador might be a career doper but he has always been a great cyclist in the process.

Him and Sky now just cannot win the Tour and keep a straight face. It would just be way out of order.
S

rsergio007 said:
Froome today - what a joke.
Sad really, to see how an obvious donkey turned racehorse doper reverts back to it's original nature so easily when the juice runs out. Despite being lab skinny, having the glowing Sky team around him, looking at his dope power meter like an idiot. Contador might be a career doper but he has always been a great cyclist in the process.

Him and Sky now just cannot win the Tour and keep a straight face. It would just be way out of order.
Click to expand...

He won a stage and was brining back attacks on his own the other day. As much as I would like to see him back to being his pre Vuelta '11 level at the Tour, I very much doubt it will happen. He will probably win the Tour and if not then at least podium.
L

Could it be, that Froome does not know he is doped? That it is distributed by Sky team to selected riders, and that those individuals don't know about it?

Certainly, we have heard dopers denying doping through the years, but I have never heard anyone quite like Froome talking so against doping. So could it be he gets it, and doesn't know?

Froome crashed and had a bad day in stage 7 and disastrous day in stage 8. Look at how much time he lost in stage 8. It is said this was due to his crash, but it seems odd, taking into account how many pro's still riding with fractured collarbones, broken fingers etc., and that Froome's crash was next to nothing.