The your favorite car thread

I got My 1st car while living in Reno in 1974. A 1966 Caprice Wagon with a 396 V8 and a 4-barrel carb. I left heading east on Interstate 80 and that was when the interstate didn’t have entrance and exit ramps. The interstate would turn into a state highway then into a town road through town and back to state highway and then back into an interstate… So I was driving and going 115 miles per hour next to a Ford Galaxy and We were going back and forth for the few inches of lead. Fun. We were heading toward Lovelock Nevada and I was feeling hungry for breakfast so I waved the guy driving the Galaxy and I pulled into the diner. Afterwards I came out of the diner and started the Caprice and put it in reverse when I heard a loud metallic pop. It was scary enough so I turned it off and got out and took a look but didn’t see anything. Then I got back in and started it up again, put it in reverse and as soon as I back up a few inches the right front wheel broke off at the spindle. Just a few miles earlier I was going 115 mph and if there wasn’t an interstate which turned into a town road, I probably would not have stopped and that wheel may have fell off while going 115 mph at the age of 18. I waited for a few days for the Greyhound to deliver another spindle and the mechanic showed Me the crack, which was dirty for about half of it indicating the spindle, was previously cracked already, just waiting to go. True story.

That's a seriously great garage you have there Huges I need to work on my technical ability, because there are some serious gems out there which are very affordable once one can do a bit of self-repair.

Anyway, drove a VW Touareg today (3.0 diesel one). Never driven such a pointless car before. It drinks fuel by the gallons especially in town and it isn't going any faster because of it (0-100km/h in over 9 seconds and at highway speeds accelaration isn't special). Sure, it has low gearing, which I didn't try, but other than going off-road and towing big things I don't see the point. That's a car not going in my garage.

I also learned something new today.

Guess what car is the fastest around corners (think rather quick corners, not the slow speed fiddly stuff). Porsche 911 (997)? BMW M3? Maybe an Audi R8?


No, you guessed wrong. It's this:

A Citroën Xantia Activa. Yes, really. Thanks to active suspension, this car stays totally flat in corners, meaning the tires maintain a bigger contact patch with the road and the ride stays smooth even when driving fast.

The goal of Citroën was to build a comfy car that stayed comfortable in corners. At no time they were looking for performance, but in their solution, they created a car that, once it is at speed, can go faster than any other modern sports car.

Hugh Januss said:
Thanks, actually the black car is a '66 912, the 4 cyl. one. The red 914 has a 300 hp Subie WRX turbo motor in it, I just got it and am still working out the bugs (I bought it for just about what the conversion parts would cost) so there are some bugs.
The only 6 cylinder Porsche that I have is a 914/6 resto project, the 275th 914/6 that Porsche made. I will most likely be pushing retirement age when I get that one done. I hope I can still crawl into it by then.
Before you other guys judge me, I got a lot more bikes than cars.
Click to expand...

Agree with Gregod ... awesome, Hugh. But your reply begs the question, what do you have in your stable of bikes?

Well here is one, technically I guess all the ones in the background are mine as well, but I don't want to keep them. The GCW said:
*snip for practicality by Parrulo*

Ducati on the back wall???
D

Huge bonnet you say? Well, it needed some space for the engine.

Early version of the 541 from the front:

Hugh Januss said:
Well here is one, technically I guess all the ones in the background are mine as well, but I don't want to keep them.

Nice! The obvious next question was what do you do to be able to afford all your fine cars and bikes, but I think you've answered that
D

oh hell, expanding a bit. Two wheeler with an engine: Yes, the British used to be able to do a bit more than shifting currencies. 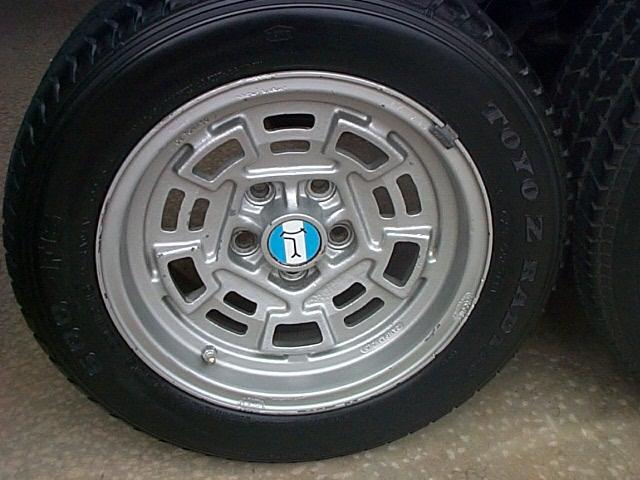 you can see part of a Bruce Canepa Motorsports license plate frame on the pantera. Bruce is a very interesting guy with a great car, particularly porsche, history.

The GCW said:
Another Nevada story.

since we're in a story-telling mood, i'll pass along one of many i have about bruce canepa.

bruce canepa motorsports used to be on water street in santa cruz, california just down the street from a vegetarian health food store. at that shop they did, among other things, bus customizations like those you see on movie sets or at f1 races.

santa cruz used to be dead head central. when the grateful dead weren't touring, hippie buses would be all over town and naturally they gravitated toward the natural food shop. however, the natural food shop didn't have any parking, so they had to park on the street across from BCM. naturally, these eyesores were no small source of annoyance for bruce. also, one can surmise that the hippies were less than thrilled with the opulent display of motoring wealth that they were stopped in front of.

the mechanics at BCM had a way of tweaking the noses of both the hippies and their boss. when the hippies were in the store and their boss wasn't looking they would sneak up on the bus and tag it with a distinctive sticker that had "bruce canepa design" printed on it.

the hippies would come into the the shop and complain, but the mechanics would just shrug and say, "i dunno". i don't exactly remember bruce's reaction to having his sticker on the buses, but i think as much as he disliked having his name stuck on one of these colorful creations, aside from being annoyed by their existence, he probably didn't like his employees wasting time in the few minutes it took to tag the bus more. And you can trust me when I say that if there were a way, I'd tap that Good call on the golf gti! Maybe my favourite car, all things considered.

Saw this car at the repair shop today:

Aston Martin DB5. Not bad at all. I should stress it was not broken, it was simply there for a service.

You have no idea as to how many people around my town ask me whether my '67 VW Beetle is for sale. (Nope, it's not.)

Other than that, I'd really like a truly classic Jag, or maybe one of these. Got to drive this for about 2 hours today. 2012 Porsche 911 Carrera S. Quite a nice car I have to say, despite me not liking the looks.

Very usable car as well, I'd say I'd prefer it to a Polo or Golf for city driving (apart from fuel consumption).
J

Audi RS5 is my favorite car of all.
J

I have drove so many cars to till date but "Audi TT Roadster" is the name of my favorite car that i love the most.
A

ONE of my fav cars was a '63 TR4. It was already almost an antique when I bought it used. I love the way the Brit sportsters of that era drive. So much fun! Oddly, I always like the MG the least. The Healey, the TR4 and 250, and the bug-eyed Sprite were good.

I had a VW once. Worst car I've ever owned, so we won't talk about that, other than I will say it was after the beetle period (mid '90
s actually).

Next fav cars! 1978 Honda Accord, CVCC engine, hatchback. My little station wagon - carried everything in her. Looked decent, super good "name" recognition, decent mileage, and a good price. Within a couple years, the Accord went up to the high-price market, and spoiled that brand for me. This Accord was my 1st 200K+ auto.

1995 Toyoto Camry - will be my 1st 300K auto. Most reliable vehicle I have ever owned - ever. Value for the dollar - incomparable. Not so much in the "fun" department, but reliable, comfortable, and good enough on the road - not a dog.
You must log in or register to reply here.
Share:
Facebook Twitter Reddit Tumblr WhatsApp Email Link