Page 38 - Get up to date with the latest news, scores & standings from the Cycling News Community.
Sidebar Sidebar
Previous Next
R

And now I can go for a bike ride... Congrats to Pogacar! Well deserved win! One of the most exciting riders in the peleton. Not a bad Tour this year
Reactions: Sandisfan and Frihed89

Broccolidwarf said:
Porte officially retiring as a GC captain, in an interview with Danish TV at the finish line.

Saying he couldn’t wish for a better end, is looking forward to helping younger riders succeed in future, and that he will be glad to be rid of the stress.
Click to expand...

That's just jinxing it for tomorrow. Crashes, crazy supporters, meteorites, you name it - it can happen. To Richie.
Reactions: Sandisfan, bambino, SafeBet and 3 others

jsem94 said:
I still can't even process what happened..
Click to expand...

Trust me... You are not the only one
Reactions: Sandisfan and perico
T 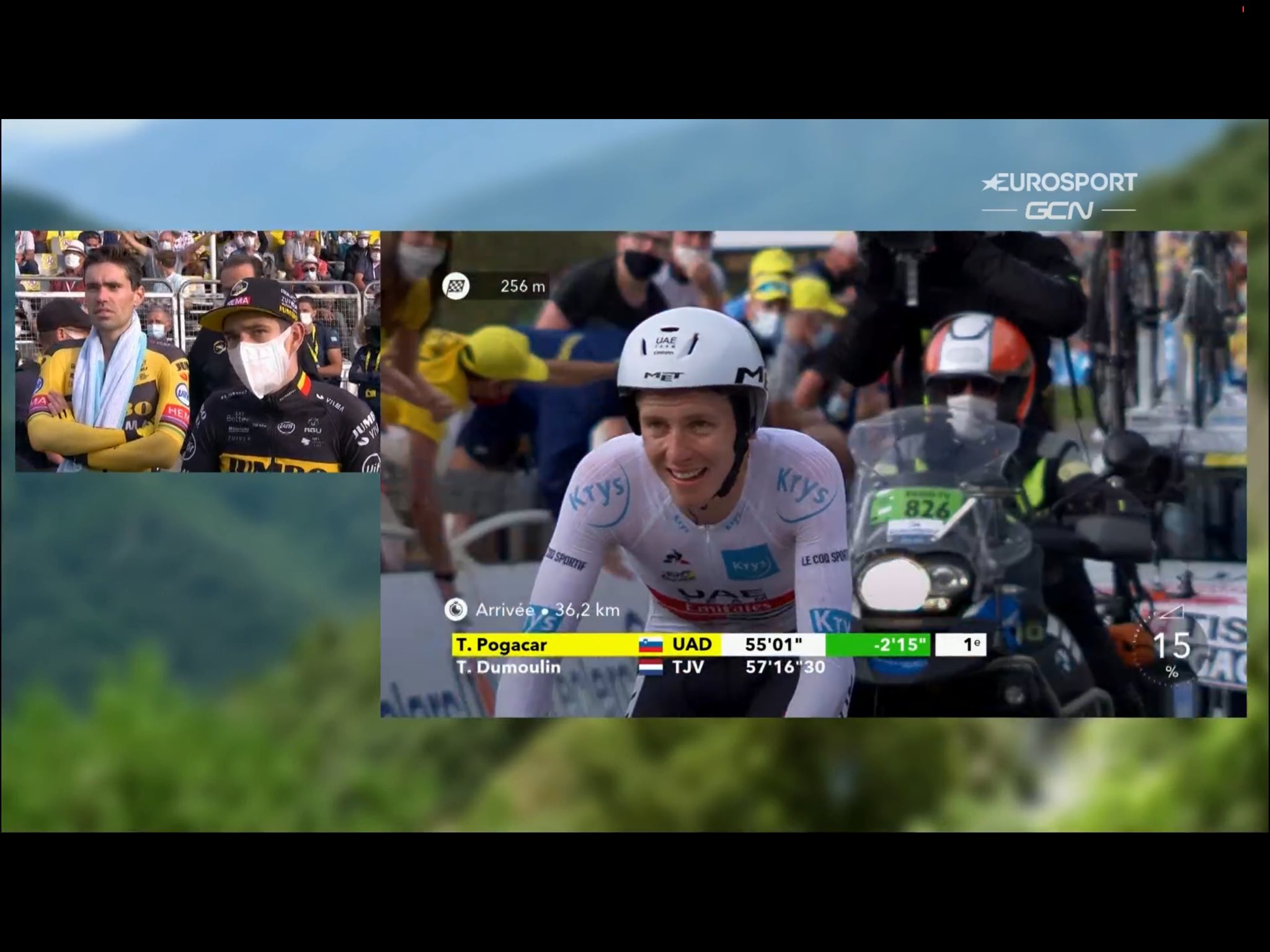 Reactions: Sandisfan, PapaD, TommyPlus and 11 others

I remember thinking, when Aru proved in bad form (again), and both he and Formolo dropped out, that now a Pogacar had no shot at the podium
Reactions: Sandisfan, Zoetemelk-fan and LaFlorecita

benzwire said:
Superman dropped like a stone. Now that was a horrific tt.
Even if Primoz had ridden better than Dumoulin, Van Aert, Porte, he still would have lost overall by a large margin. Pogacar just rode an unbelievable tt. Almost no one thought this was even possible.
Click to expand...

No one could have predicted Pogacar would win the TT. He was not even a favorite before gaining time on Roglic.
Yes. Don't blame Roglic. Even Dumoulin felt impossible because a top TT specialist put all the effort and still lost more than one minute.
Reactions: Sandisfan, Carols and gregrowlerson

The jerseys podium tomorrow will just be Pogacar and Bennett.
Reactions: Sandisfan, Carols, Zinoviev Letter and 2 others
R

That is a priceless snapshot defining the 2020 TdF in one picture!!!
S

75Driver said:
I still don’t understand. Did Rog burn out from previous days? Doesn’t seem like it but for whatever reason he bonked bad here. Should have been at least 2nd or 3rd in the TT but finished outside top 5. That’s pitiful for how he was riding. He had to be feeling bad.
Click to expand...

His body language wasnt great. He was on the edge of the saddle pretty early in the stage. He was standing up a lot on the bike, which is unusual for him. He didnt look comfortable. Receiving info that he was losing time is tough mentally. Every image on the climb screamed panic.

Pog just had an incredible day. From the interview it sounded like they had did a very thorough recon. Im sure JV must have did that too, but maybe they relied too much on Roglic TT ability? They slipped up somewhere.

In the end, which I believe I think I saw another poster say, not following Pog on stage 8 was a huge mistake if he had the legs. You dont "gift" time away. Pog also must have gotten a huge confidence boost from that. He has never looked back since that stage in this Tour.

And riding so defensively and calculated, it can be hard to switch on the offense when things not going your way all of a sudden.

So much to write about this. Im sure we gonna be doing that for a few days/weeks on here. Just hoping it is for real. I love Pog and not so say "I knew it", but he was the first name on my team in the TdF game.
Reactions: Sandisfan, gregrowlerson, postmanhat and 1 other person
Y

I doubt Pogacar will ever ride a better ITT in a GT - It was off the charts - Yes, Roglic's TT's at the end of GT's do wane but it was still a respectable ride in defending the yellow jersey.
Reactions: Sandisfan, Carols and gregrowlerson
R

bob.a.feet said:
The jerseys podium tomorrow will just be Pogacar and Bennett.
Click to expand...

Plus, Hirschi for most aggressive rider of the Tour and the top three teams in the team competition Also, it is top 3 on the podium in Paris, so plenty of people up there...
Reactions: Sandisfan and Frihed89

bob.a.feet said:
The jerseys podium tomorrow will just be Pogacar and Bennett.
Click to expand...

During the yellow jersey, the 2nd and 3rd will also be on the podium.
Reactions: Sandisfan

It’s like being 1-0 up all game and then conceding two in injury time.
Reactions: Sandisfan
S

movingtarget said:
Nice TT by Caruso for a top 10 on GC. Did Lopez have a fall or a mechanical ? He fell out of the top five !
Click to expand...

he just had a nightmare instead
Reactions: Sandisfan

This Tour will be fun too rate, extremely boring to so so mountain stages and above average to great everything else.
Reactions: Sandisfan, gregrowlerson, Tonton and 2 others

I already told that it was stupid of Roglic to 'allow' Pogacar to take time on Peyresourde, and it proved to be the case. If Pogacar had 45 seconds more to take, he would probably have not been flying like this.

Roglic probably couldn't follow Pogacar at Peyresourde, but it was still a tactical mistake not to try.
Reactions: LaFlorecita

Volderke said:
During the yellow jersey, the 2nd and 3rd will also be on the podium.
Click to expand...

I'm talking about the one where they have all 4 jersey winners together.
Reactions: Volderke

Roglic says he did get info on the time splits. Have to wonder if that's the best strategy, it could be very demotivating. I know for example in 2010 when Contador started badly in the final time trial and Schleck was actually a bit faster, the DS did encourage him to speed up a bit as the timing was close, but didn't actually tell him the split times.
Reactions: Sandisfan, TourOfSardinia and Andy262

Volderke said:
I already told that it was stupid of Roglic to 'allow' Pogacar to take time on Peyresourde, and it proved to be the case. If Pogacar had 45 seconds more to take, he would probably have not been flying like this.

Roglic probably couldn't follow Pogacar at Peyresourde, but it was still a tactical mistake not to try.
Click to expand...

I feel Jumbo and Roglic wasted many opportunities to put pressure on Pogacar. A minute is so easily lost on a bad day or with a mechanical, so their passive attitude made little sense to me.
Reactions: gregrowlerson, Andy262, Volderke and 4 others

Poursuivant said:
It’s like being 1-0 up all game and then conceding two in injury time.
Click to expand...

After subbing out all your strikers to get extra defenders.
Reactions: Sandisfan

So Porte was as fast as a fast Dumoulin, and Roglic finished within 35 seconds of Dumo and made top 5 but still ceded almost 2 minutes to Pogi and lost GC by almost a minute. Makes sense.
Reactions: Sandisfan, TourOfSardinia, Frihed89 and 1 other person

The only thing that's harder to keep pace with than Pogacar in an ITT is this stage thread!
Reactions: Sandisfan, SarahtheDane, Sestriere and 1 other person
You must log in or register to reply here.
Share:
Facebook Twitter Reddit Tumblr WhatsApp Email Link